I won this on ebay the other day and Googling for info on the spec after the event I found this thread on here about the listing. So I promised Adrian I'd post some more info after I'd collected the bike.

Overall it's in OK condition. Everything is original as far as I can tell, which is nice. 25 year old tyres & brake blocks don't look too confidence-inspiring though :? It's clearly not been ridden much but has got 20+ years of storage under its belt there's plenty of scuffs & scrapes and some surface rust. I'll tidy it up as best I can.

Here's a pic after a basic clean up. 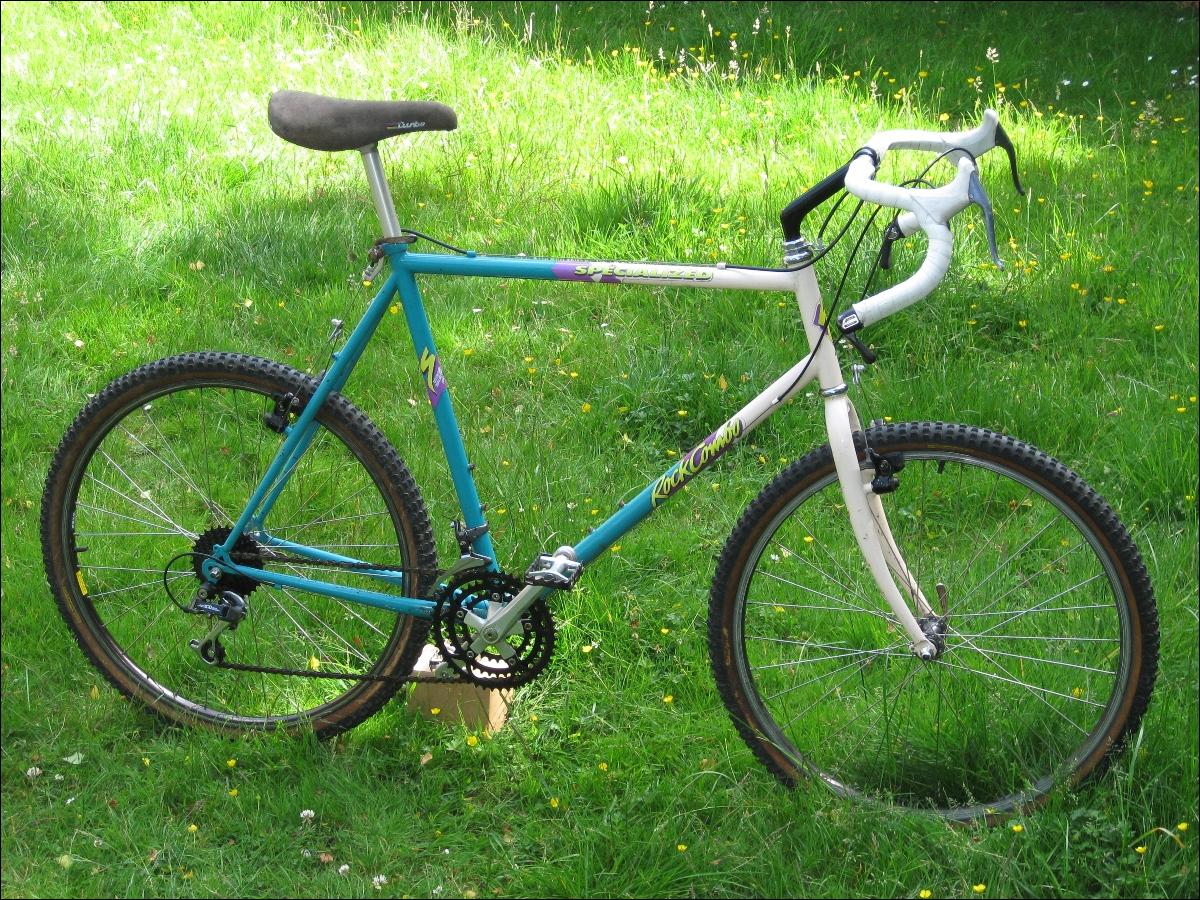 If anyone's still thinking "WTF is that ?", here's a scan of the 1989 brochure courtesy of stumpjumper1990. The bike is basically a Rockhopper with a steeper head angle, lower BB and drop bars. A 26" cross bike. Kinda. 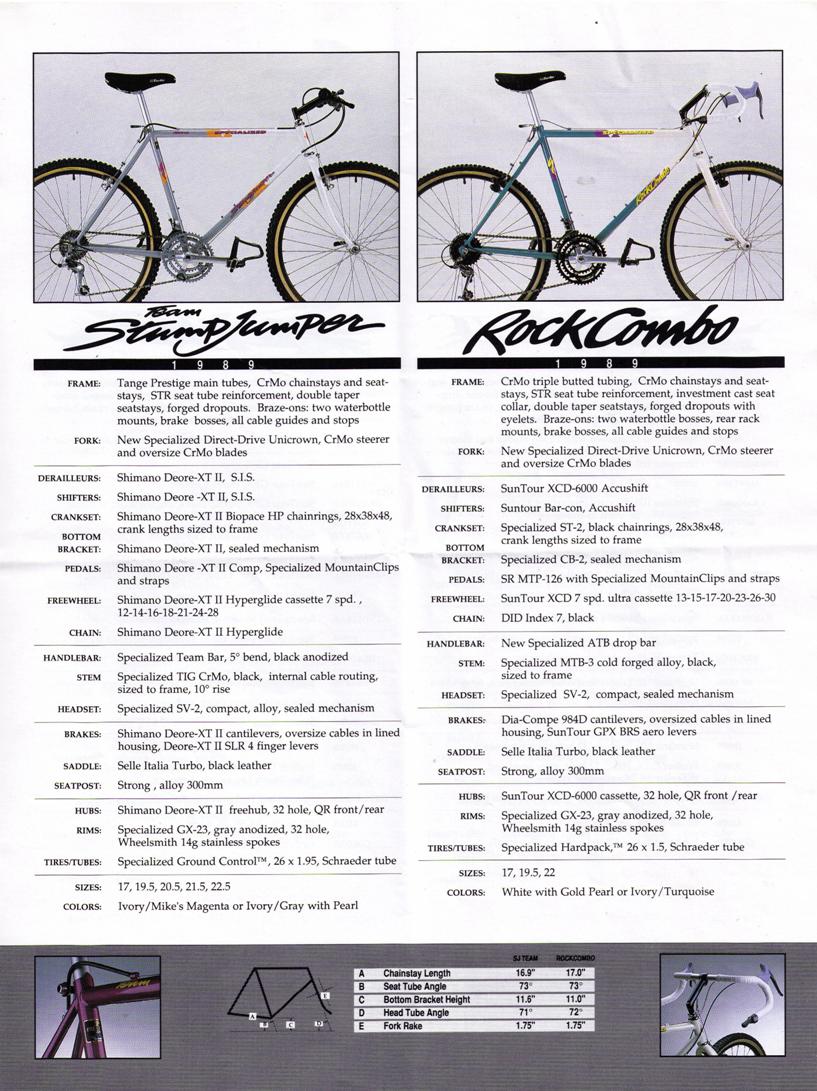 Gears and brakes were already working nicely so no need for an immediate strip down, meaning I could take it for a spin straight away. And I'm rather taken with it On the road it immediately feels stable and comfortable. I could see one of these making a great long-distance tourer. My first decent bike (in, err, 1987), before I ever had a mountain bike, was a custom 700c touring bike built with 531st tubing. The Rock Combo feels like a chunkier version of that - in a good way. I used to have 700x32 tyres on that bike; 32mm is about 1.25" so the 1.5" tyres on here are only a small step up in size. After half a mile on the road I turned onto the bridleway and realised that this is exactly what the bike is built for. The tyres aren't mega-grippy so you need to keep your wits about you a little bit. That's part of the fun though, right ?? I need to try it with a few other tyres to see how it responds. I think 1.5" might be the sweet spot for all-round use though. And as already mentioned, the brakes are terrible. I'll need to do something about that.

A few more miles of bridleway and then back on the road for the last stretch home. Perfect bike for it. I'm really quite chuffed.

Sorry Adrian, I think it's going to be a keeper

Thanks for sharing mate. Truth be told, the frame is far too big for me. Loved those Rock Combo's ever since getting a promo Specialized video with one in it. One of my favourite tyres from my BITD too, I still need another one to complete my pair.

That's brilliant! I'd love one of those.

Out of interest, what size is it?

I take it these tyres are a bit rare then ? I remember them from BITD too and they were very cool. The ones on here are literally falling apart unfortunately. Is there anything similar around ? 1.5", slightly knobbly and skin/amber wall. Kenda Small Blocks look nice but I don't really want black sidewalls.
R

Are there more people still using their RockCombo's? 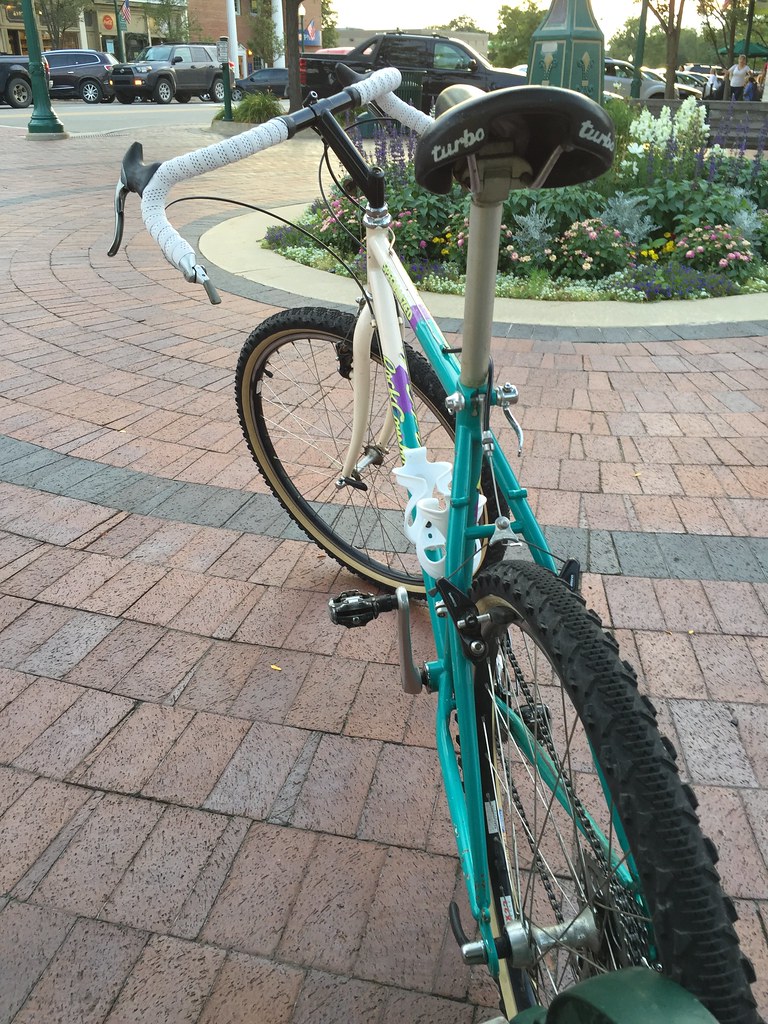 It wasn't as original as expected when I got it (brakes, stem (a Diamond Back sorta-knockoff of a Salsa P10), brake levers, tires were wrong), so I didn't feel too bad about rebuilding it with an M73x kit from a 1991 Stumpjumper Comp that I salvaged off craigslist. The patina on those parts matched the bike's pretty well. 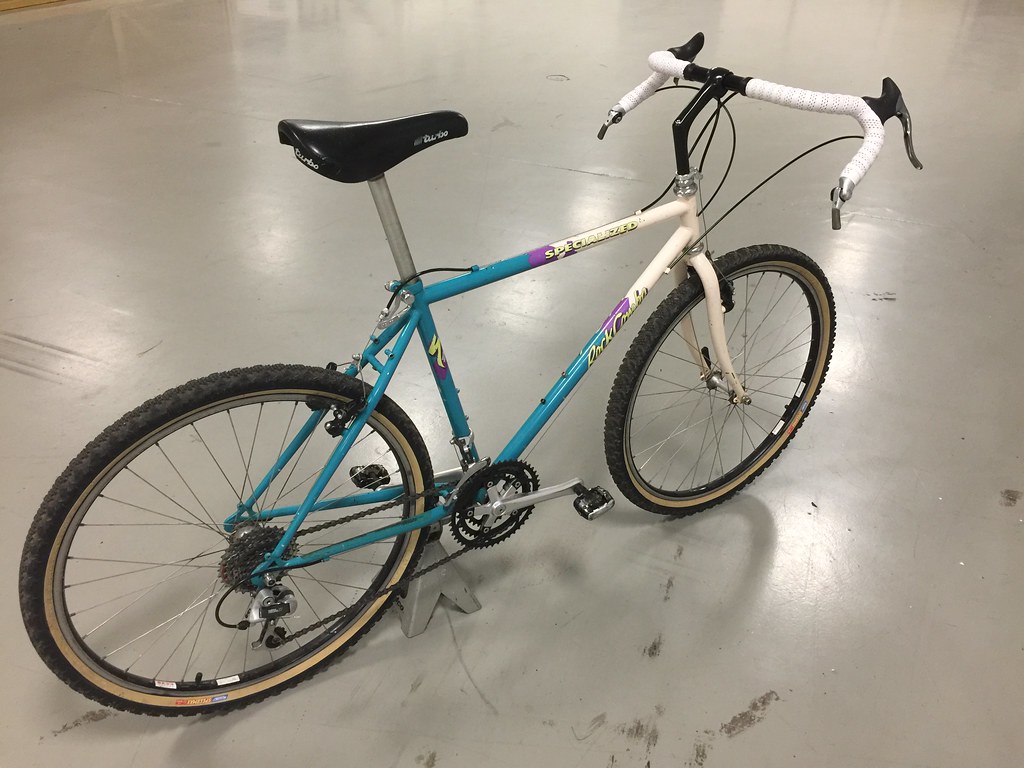 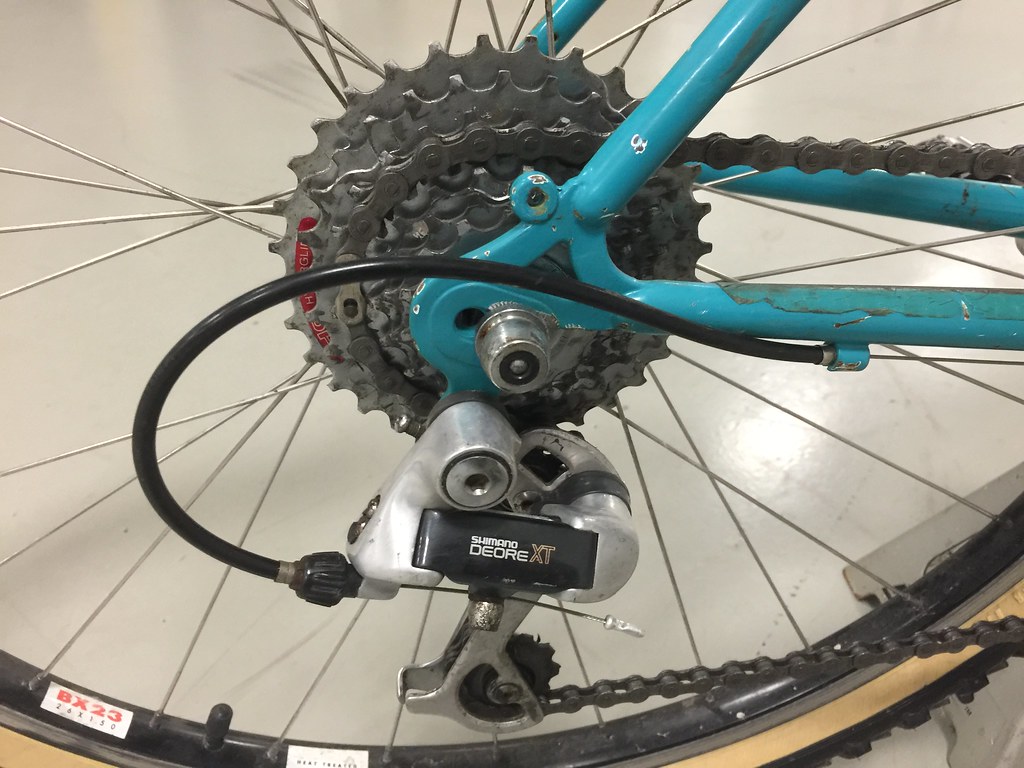 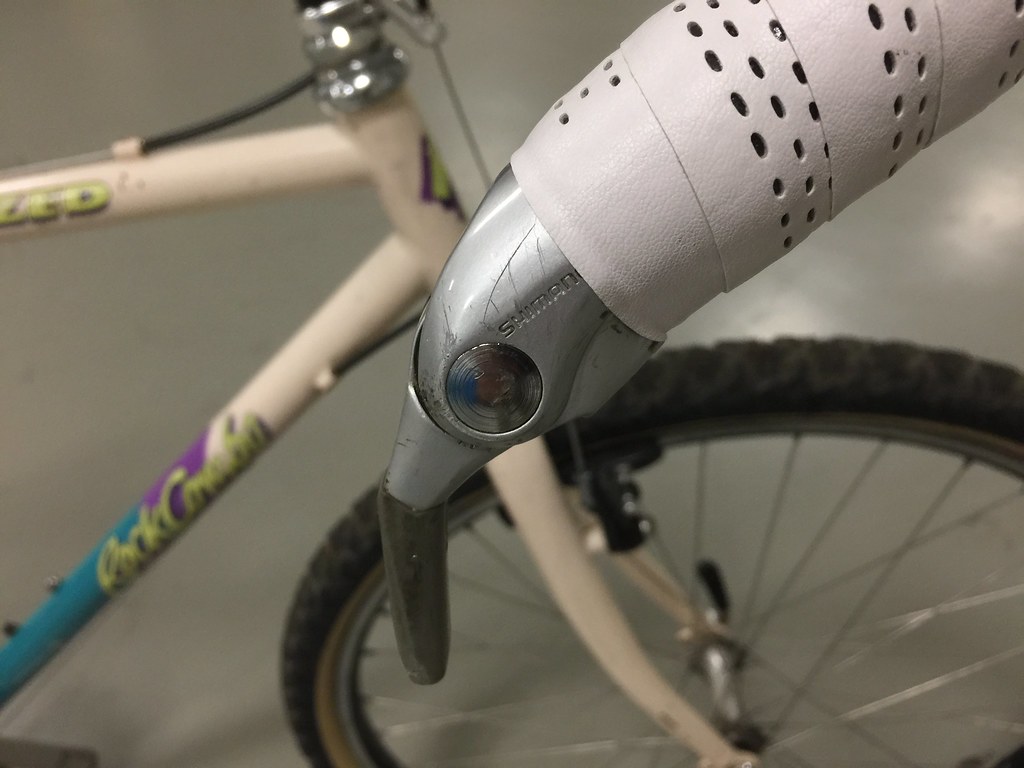 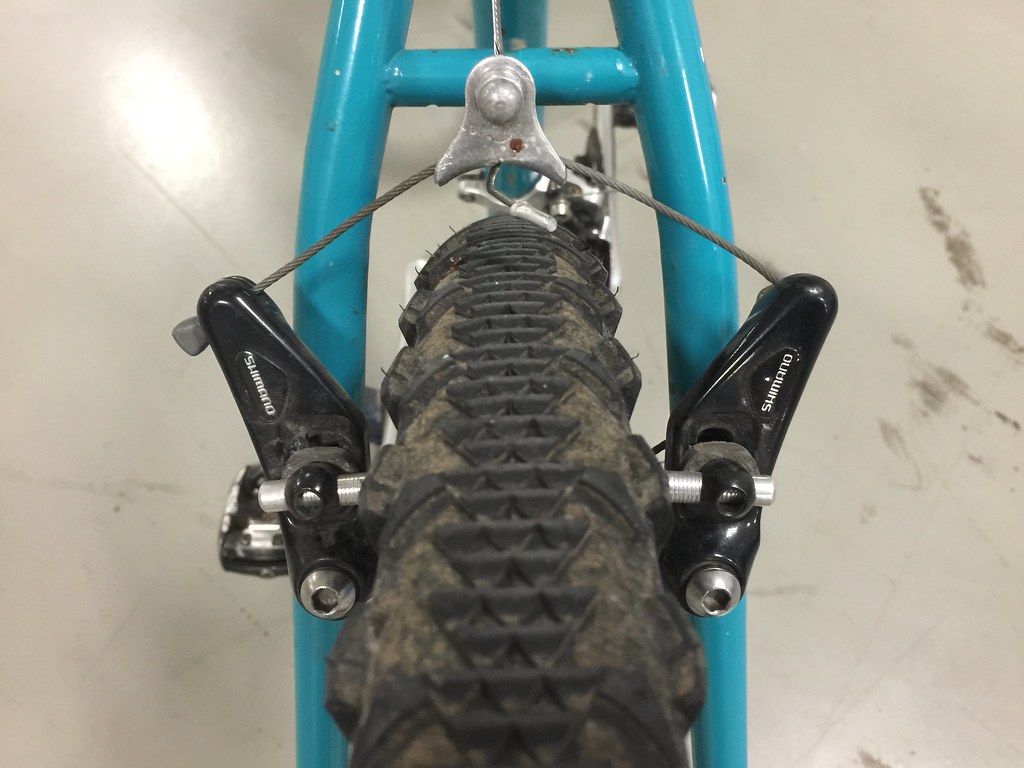 Handlebar is a Midge. It's my favorite dirt drop, and I figured a safer bet than losing a tooth or four when the original BB-1 took a dive.
Speedmaxes were also clearly not around in 1989, but they jive with the bike pretty well.

It's a really interesting bike to ride. The steering is quick and the low BB and long stays really make it fun to lean into a corner. The factory apparently built them with the wrong tubes. If I had to guess I'd say they swapped in heavier pipes in the seat stays and chainstays - the thing is really back-heavy. I've had it up for sale, but then I ride it and change my mind - it can be a lot of fun in the right conditions.

I should have updated this thread really. I've slowly tinkered with my RockCombo, and it's ended up as a touring bike. And I really do love it. Mudguards & racks, and Schwalbe Marathons. It's not fast but it's very comfy and feels bomb proof. I'd take it anywhere. I also upgraded with some XCD6000 cantis and pedals. Not strictly original but they match the mechs so I don't feel they're out of place. The original spec was a real bitsa anyway.

Also.... I bought another one ! It cropped up on ebay and I HAD to buy it. Not quite as original as my first one it's but mostly there and was still a good deal for £120. I've not actually ridden it but I'll plan to keep it more like the original concept. 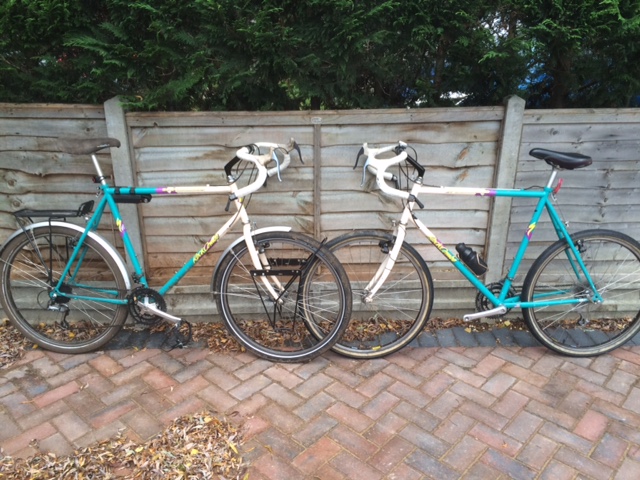 There was another on ebay recently (CLICK) but it was missing too many parts and looked very tatty. And also far too expensive.

Not sure if these are still in your search radius, or if this is any good, but whilst untidy, the fundamentals are all there.

That's the same one I linked to !

Looks like it's lost its original rear wheel, which is a shame, and would definitely bug me. I could be wrong, but this might be the only model that ever had XCD6000 hubs + Spesh own brand rims ? Even finding the bits separately would be tricky.

However, if anyone was thinking of buying it and splitting... drop me a line about the chainset
You must log in or register to reply here.