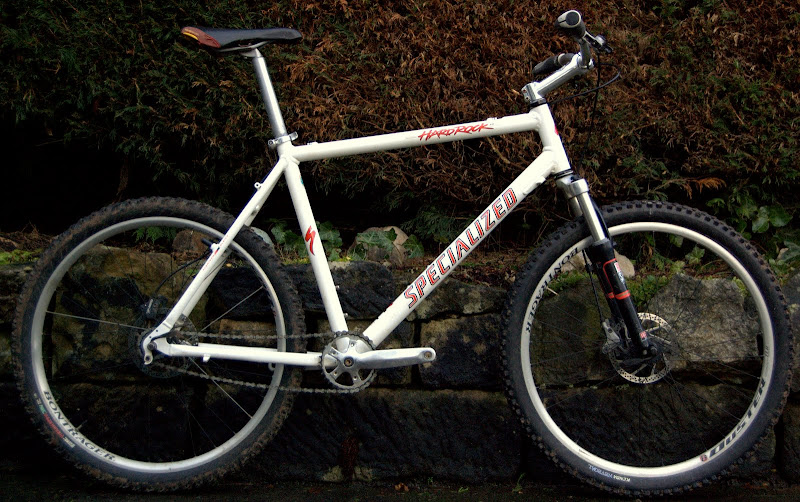 The Hardrock hasn't seen a lot of action this year. I did manage to re-instate the Judy T2s using an old donor pair, and I finally finished the decals. Homemade and printed myself - the quality is reasonable, although I doubt they'll be all that hard wearing.

Also ditched the Blackspire tensioner - while it looked good, it wasn't really up to the job and it did gradually slip and lose tension.

Also added a nice wide Azonics bar, plus an era correct stem of a Rockhopper.


September 09 v2.0 build:
I killed the Judy T2s, so I picked up a pair of new carbon forks off ebay (with correct 425mm C-to-A). Also picked up a cheap 'S' logo sticker for the head tube, but it's peeling already

Put on a set of skinny 1.8 XC Pros, and a de-anodised (and then badly polished) old EA50 stem. Also put the original bars back on, and dumped the Singleator for a Blackspire Stinger chainguide thingy that sits on the BB and acts a tensioner - much neater! Also replaced the saddle, as my fat ar*e was wearing it down far too quickly 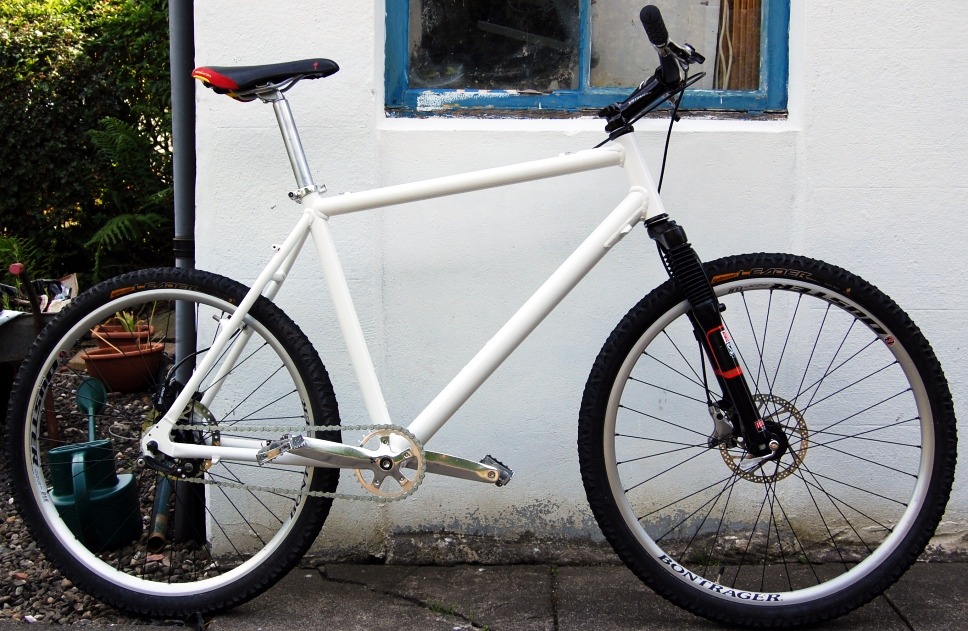 Tooling about on the street, it feels quite nimble compared to my modern GT. Front end is a lot lighter too. Need to take it for a proper burl up a hill though.

History & How it used to look
My first mountain bike (or can I count my Grifter?). Bought autumn 1998 after moving to northern California with my work. Picked it up for less than $200 in the LBS closing down sale, which 6 years later when I moved back to Scotland was still in business and having that very same sale. Here it is 11 years later running the most cost effective weight weenie inner tubes and tyre combo known to man. 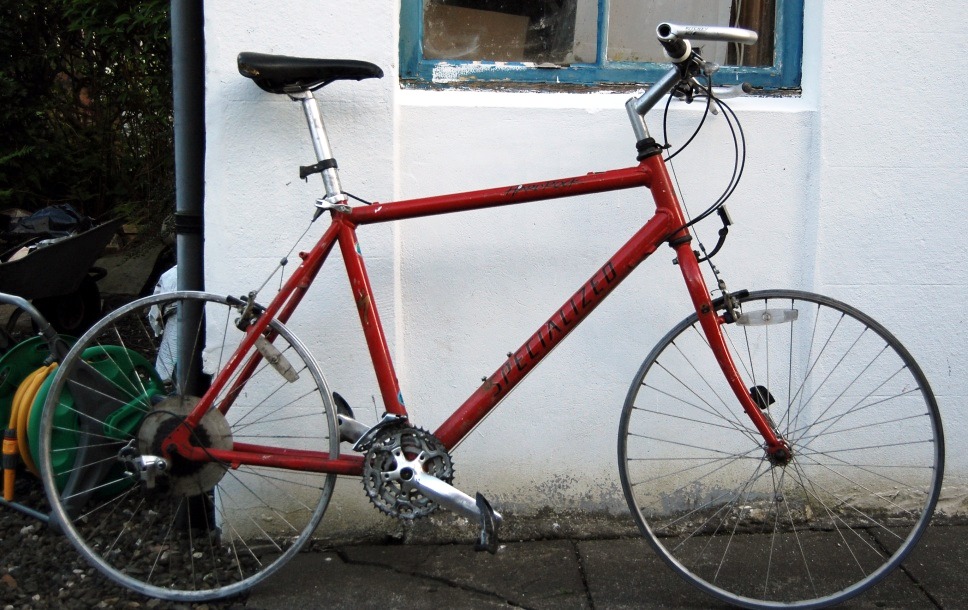 I used it as my daily work bike for just over three years. I ended up sticking some slicks on as well as a pair of LOOK roadie pedals *cough cough* for my 15 mile a day round trip commute. Legs of sinewy steel developed, although I had increasing difficulty seeing them over my expanding gut fuelled by huge American portions, beer and a lack of willpower - like all the best football matches, my BMI was a tale of two halves.

Anyway, I ran the bike into the ground - the only maintenance I did was lubing the chain and replacing them when they snapped, as well as the usual tyres/tubes/brake blocks. Utterly reliable though. Also ashamed to admit that I hardly ventured off-road with it at all, although the times I did were livened up by roadie clipins. Anyway, I eventually developed a nasty '70s Mercedes habit (hey at least it was retro), which meant cycling to work died a slow dealth.

Fast forward to 2004, when I moved back to Scotland. I put on some new tyres and got back on the bike in an attempt to shed the 3 stones I'd gained in the States. Trundled along the nearby canal paths and up the local woods occasionally, with the road clippies making for some frequent 'TIMBERRRR!' moments as I tipped over into the mud, feet still firmly held in the pedals. Finally retired it last year, and moved into the 21st century with a new GT.

I'd been thinking about doing something with the frame for a while, although finally started doing something about it last month. My daughter and assorted tools made short work of the initial stripdown, and after spending a week trying to get the BB out and watching the splines beginning to strip, I resorted to using the pole of my clothes whirlygig dryer as a breaker bar on my adjustable spanner - the BB tool was held firmly in the splines by a G clamp, and hey presto, one loud bang and cloud of rusty dust later and it was off. 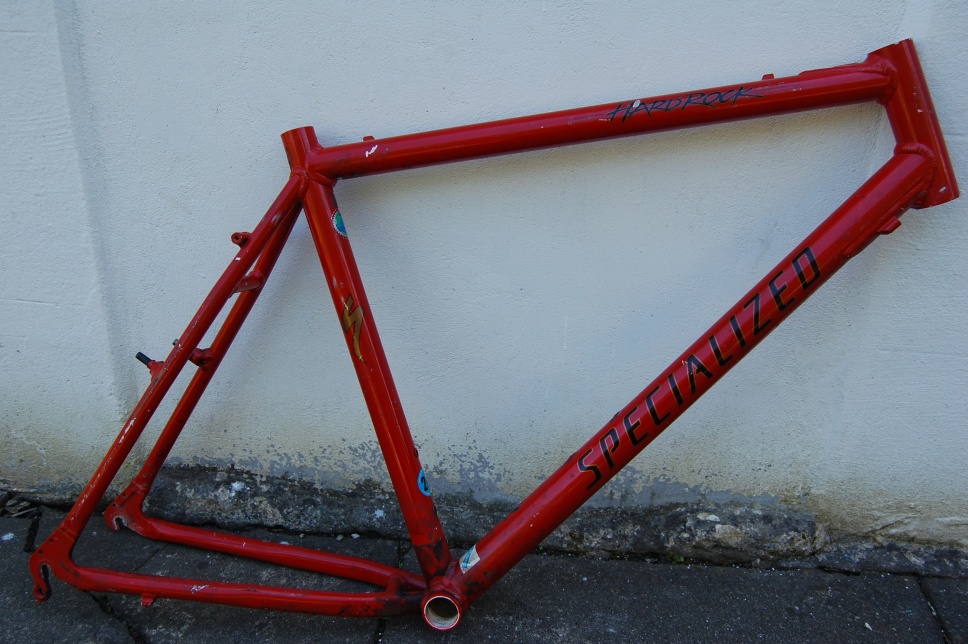 As you can see, the original paint and decals were pretty shabby, so the frame was taken to the local powdercoaters for a strip and new coat. Decent job, not a perfect finish, but he protected all the threads and tubes reasonably well. 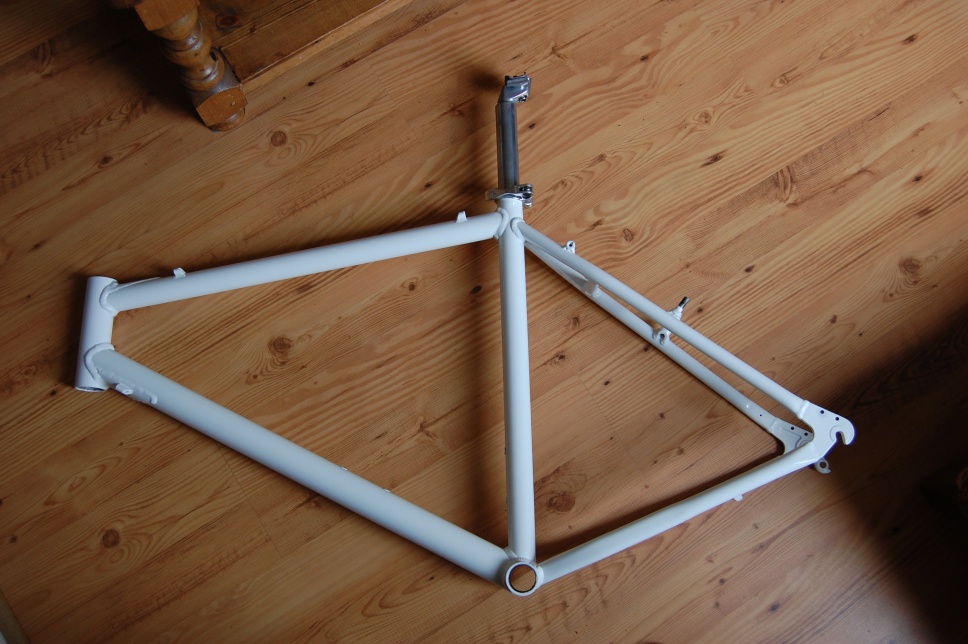 Obviously this isn't going to be a restore to it's original state. Almost everything's knackered, and it's not exactly a rarity. And of course its now a lovely white. Still in two minds about decals - I like the clean white of the bare frame, but I think the gold 'S' logo with the black outline would look good, and a bit of wordplay with the 'Hardrock' wouldn't go amiss.

So I'm going to give single speeding a go, always quite fancied trying that. I'll go with a suspension fork up front instead of rigids - I'm already falling to bits and my body doesn't the additional encouragement. Ultimately it's going to be a mix of modern and old. I'll definitely be re-using the seat-pin as well as the original cranks, and as funds allow I'll pick up whatever appeals in the For Sale forum, trying to use Specialized parts where I can and avoiding eBay when possible.

I've just picked up what look like a very tidy pair of 98 Judy T2s from Harryburgundy, so they should be a pretty close match for the c-to-a of the original forks. And I can still fit discs to them. I'm going to try popping a disc on the back too with the help of an A2Z adaptor (thanks jez-4-bikes-max). Got a nice modern Spesh stem and bars from wynne.

I've got a few other bits and bobs coming down the pipeline, and I'll update as it comes together... But like I said at the top, I don't think it's going appeal to the purists

Hello Zigzag
That looks great. Should build up nice. I had one of the later Hardrocks, the last in steel I think, and it was a great bike. They are strong, good for touring as well.
That is a very light tyre/tube combo in that first pic but IMHO I dont think its the comfortable option.
SS is great as we have just come back from SSUK09 and it was my rigid SS Stumpies hardest ride yet as a singlespeed but it and I had a ball and survived.
Are you still in Scotland? If so you will have to join us on a macretro ride sometime.
Keep the updates coming.

Cheers Jamie - since when did the weight weenies care about comfort?

Still in Scotland, so I'll definitely be up for next macretro... as long as my frankenbike isn't shunned.

I've read some posts on the SSUK weekend, looks like it was really good time. Congrats on surviving

Keep an eye on the macretro thread in the ride section. Join in the piontless banter
Definately come along for a ride, we're spread about a bit so theres usually something going on somewhere.
Nothing is shunned with us, the piss taken maybe, but never shunned. Yours is freshly painted so you have nothing to fear either way
Its a great bunch of friendly people and as your a retro and your in Scotland then you are automatically a macretro.
Welcome aboard.

Like the white - bling it up with some gold bits

Cheers DR - Funnily enough there were some nice hoops on eBay last week with gold Hope hubs - unfortunately they went for way above my budget. Anyway, since you're interested, here's how its looking now: 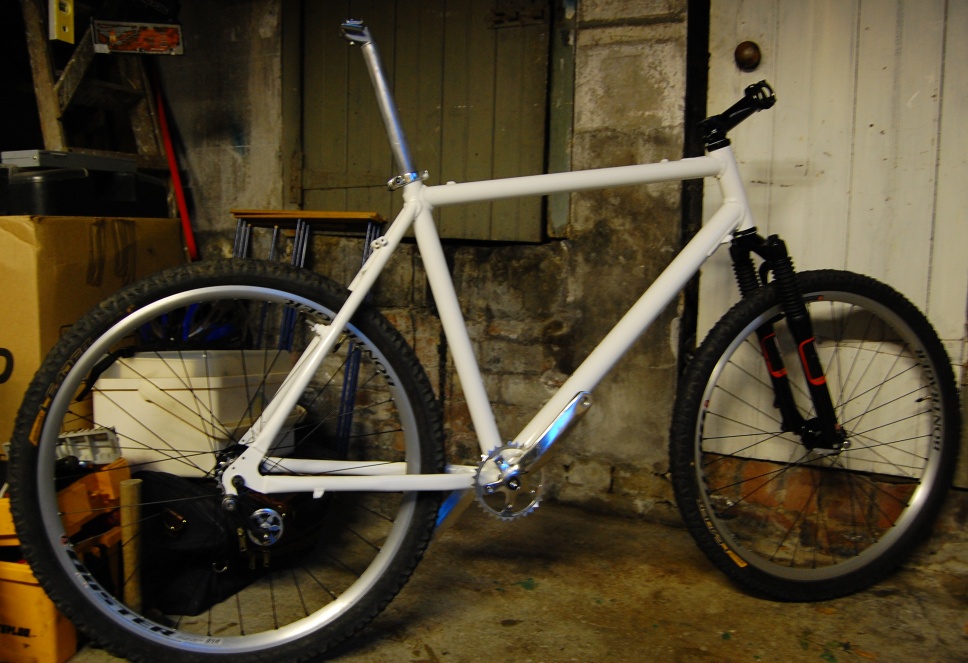 Judy T2s on, singleator at the back, and original crank back on with a new 32T chainring - bit of a bugger this one, since its a 74mm BCD, ended up buying new since my original was totally shagged.

I picked up a pair of Bontrager Dusters. I like the fact they're silver (at least keeps it looking *vaguely* retro), although they're pretty nice rims and are ready for tubeless, so they may yet make it onto my day-to-day bike.

Dare I say it... disc brakes next

That looks brilliant, some excellent inspiration for my bike. Gotta get cracking soon though, just entered a team in the cheddar challenge endurance race and its the only bike i have at the moment and is no where near ready.

What forks you got on there, need to get my self a set.

Forks are '98 Judy T2 - basic spring and elastomer, but they'll hopefully work well on the bike - the crown-to-axle of the original rigid forks was about 425mm, and these are really close (around 430-ish I think), so geometry should be OK.

Other option I considered were the Rockshox SID Dual Air (1999 - 2007) - when set at 63mm travel, their c-to-a is 434 which probably would have been fine too. If you're thinking of upgrading from rigid and have got the money, they'd be a nice choice - there might even still be a set or two available in the For Sale forum.

'97 Hardrock is 1 1/8", original rigid fork is threaded. If you're going to upgrade to a threadless fork, then obviously budget for a new headset and a replacement for the original quill stem too.

Get a thread started for yours! Endurance race? Rather you than me

Looks great I like decals and think the bike would look cool with some in black. Have you ss before- love the simplicity of ss so make sure you let us know your thoughts
Z

clockworkgazz":2ttr87qp said:
Looks great I like decals and think the bike would look cool with some in black. Have you ss before- love the simplicity of ss so make sure you let us know your thoughts
Click to expand...

Cheers Gazz. I like the original decals and I think they'd look pretty spiffy on the white, really nice gold/black theme - I need to drop gil_m a PM and see if that's something he could do for me.

Having said that all that, I was using red tape to hold the brake lines in place, and it looks really good against the white. Then I saw Kaiser's stumpy and I'm convinced - So I ordered a nice red S for the headtube from ebay, and I'll chuck that on in the meantime.

Never tried SS before, but the idea of it really appeals (plus I can't setup a rear-mech for toffee). I'll start at 32/16 and take it from there, may not be quite as excited about it when reality sets in though
You must log in or register to reply here.