Was a bit remiss of me not to have a build thread and enter this bike, only to win BOTM, so here's the story for those wanting more photos.


I'll start by stating the obvious. I BLOODY LOVE BIKES. Like lots of kids, I was (un)fortunate enough to get a Raleigh Maverick for my birthday which was used for bombing around town for a few years before discovering where these things can really take you. By late 1989 I was fully hooked on the mtb life and rode the wave of technical advances. I've had loads of bikes, some for a matter of months and others for years. For my 40th birthday I wanted something special, something no-one else would ever have. Looked at a few boutique off the peg brands but nothing quite hit the spot.
I started hunting for a custom builder that could understand what I was looking for. I had a Cannondale Flash 29er which I really liked but I just didn't quite fit. I've short legs/long torso for my height and often struggle to get enough length for the right stand over clearance or vice versa. I've always loved quirky components and really liked the Lefty fork on the bike. I chanced over an article in Singletrack with a review of a Saffron Frameworks bike, with an integrated one piece carbon seatpost. Reminded me of a modern take on an old Pace. A quick visit to the website ( https://www.saffronframeworks.com ) and I was hooked. Endless possibilities. One feature that really grabbed me was Matthew's signature bi-lamiate head tube. It as like a modern nod towards the old lugged frame I'd started on. Reynolds has also not long introduced their stainless tube set and I rather liked the Ti look. Lead times were quoted in 2-3 months, so I sent off an email. Matthew phoned me back on his was to Bespoked 2014 in April and we had a few phone calls discussing my requirements. When he said he'd ridden a bike with a lefty for a while, I knew I had my man.
During the initial discussion I was swayed away from stainless as he reckons it doesn't actually make a nice feeling mtb frame. We also couldn't do the carbon seat tube, as I wanted a dropper post and Reynolds couldn't give him strength ratings for using the carbon tube with one. Normally the tube he uses has a bolt on seat clamp topper, not a clamped post. I was advised towards Columbus Zona tubing, which although lower down the Columbus order is better suited to mtb frames. The one cuckoo in the nest is a Reynolds 853 down tube, used as a top tube to take the extra forces from the double crown of the Lefty fork. The bi-laminate head tube was a go-er though.

Like I said this was before the Bespoked show, at which he won a load of awards and orders exploded. I had my place in the build queue, but as I discovered the time frame was about to expand, significantly. Early May I'd paid my deposit and was down in London for the bike fit at Cyclefit HQ. It was a very interesting experience and a bit surreal. Watching your pedal stroke and leg movements on the screen as your stick leg went up and down and your power output varied as small adjustments were made. I don't doubt the guy's experience ( he used to do Cancellara's fits ) but even now I'm not sure about the relevance of such small changes to a seated position when you move about so much on an mtb. another thing was he was recommending a 110mm stem, which I was not happy about. I wanted more length in the frame and a shorter stem. This is where the frame builders art comes in and he used the bike fit data and measurements from my Cannondale to come up with the final geometry. I also visited Matthew at his workshop to talk about the fame fitting. This is when we decided to use Poly Drops. These are interchangeable dropouts where one part is structural with the frame and the other part can be changed. I went for 142 thru axle, but this can easily be swapped out to a qr or even single speed one, without altering the frame. Then it was just a case of waiting. And waiting. And waiting.

Christmas was coming up and finally my place in the build queue was arriving. I chose the slightly more expensive route of having Matthew source the parts as I had a pretty specific build in mind and wanted to know he'd have all the parts on hand during the build process.


Choosing frame colour was nerve wracking. I'd seen a few metallic blues I liked but in the end played it safe and went for a Porsche metallic grey.

The bike was finally finished in March, but then came a phone call. Bespoked 2015 was coming up and he wanted to show the bike there. So the bike had it's weekend in the spotlight and I finally received it in April, one year on from the initial email.

The head tube is gorgeous and a lot of work. He had to build the frame, then cut the head tube apart. The inner part is the custom machined from a block of stainless steel to take a tapered steerer tube for the fork. This is the brazed into the frame to look like a solid piece. When the main frame is painted the stainless is polished for a contrast finish. The dropouts are also contrast brushed. 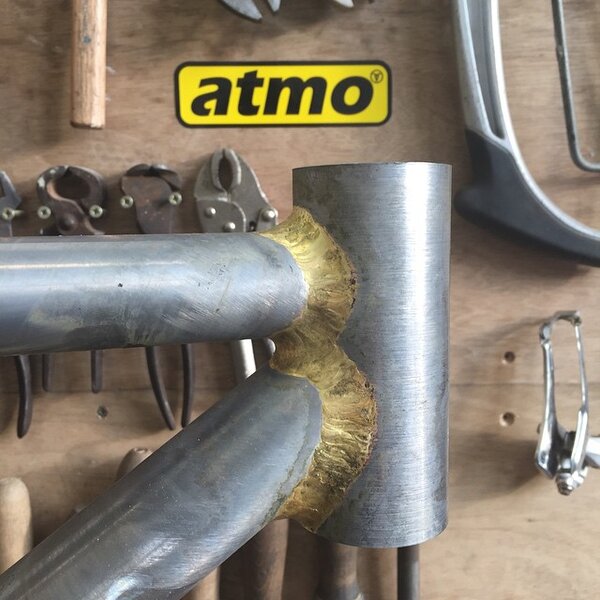 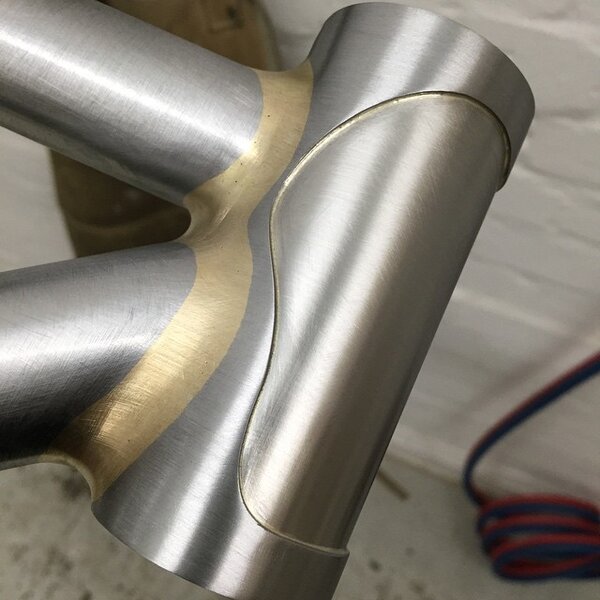 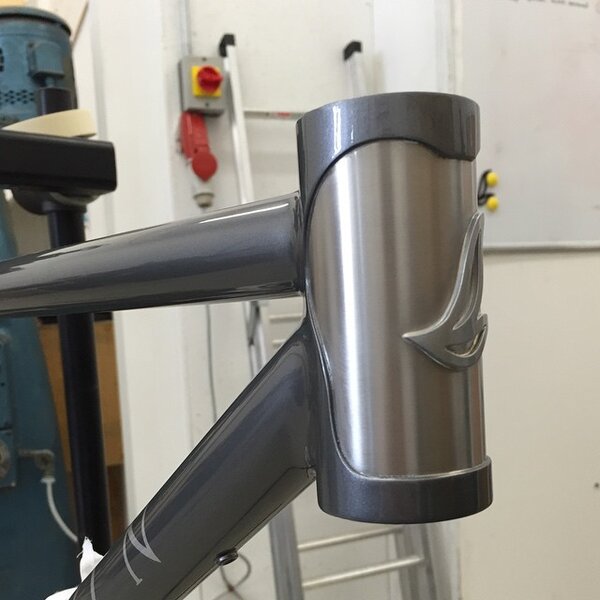 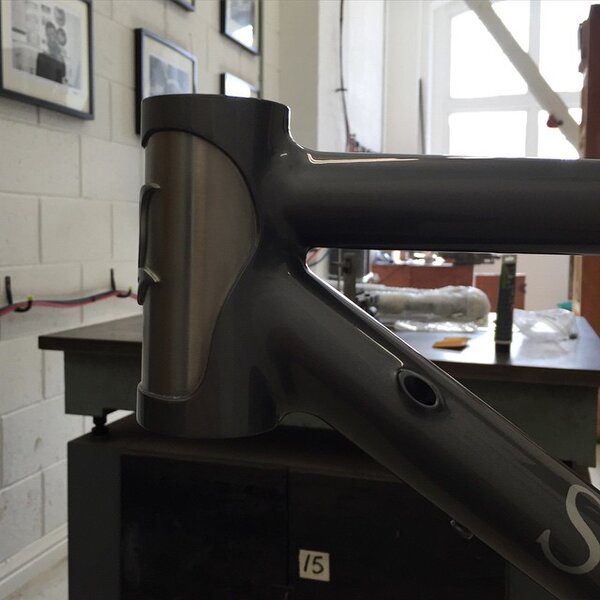 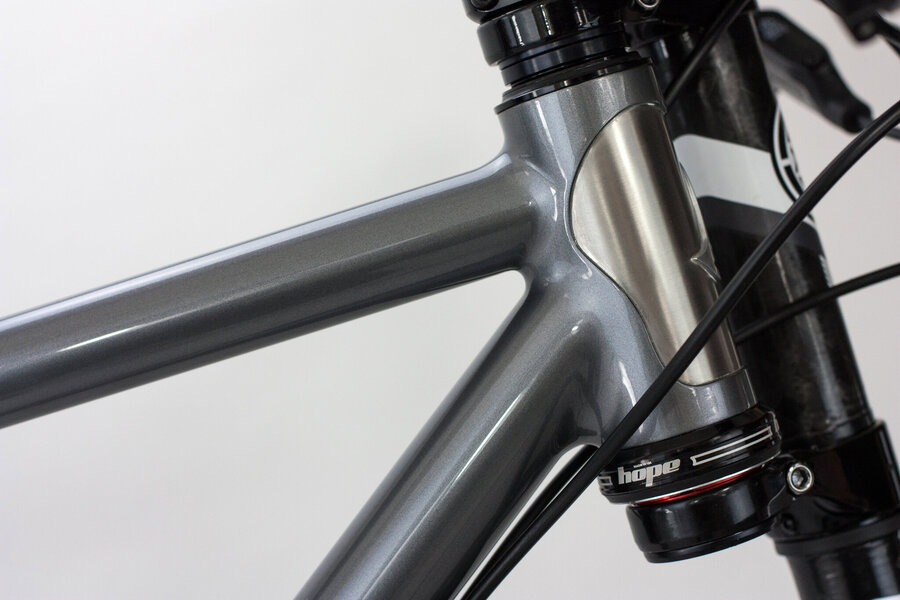 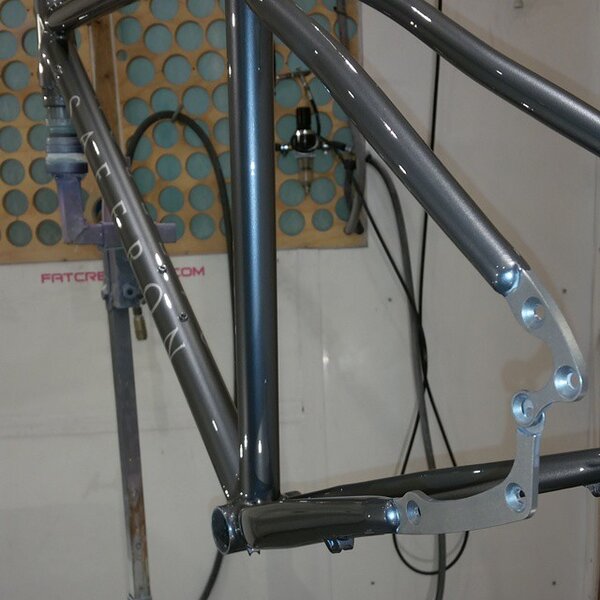 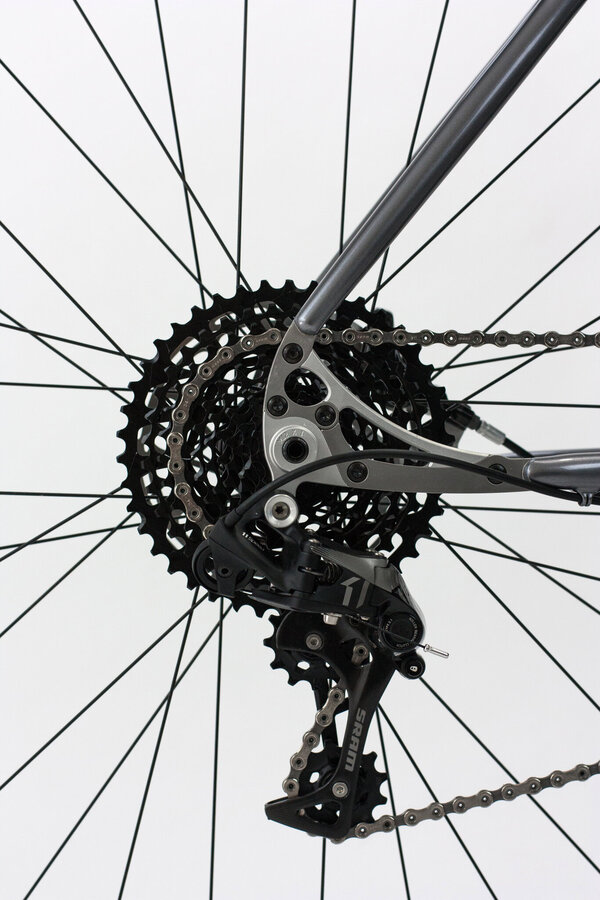 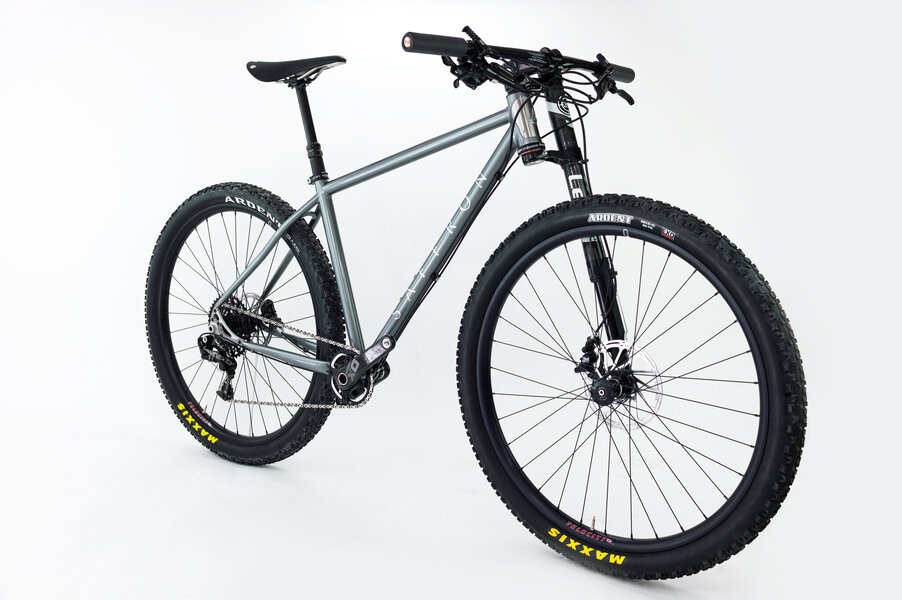 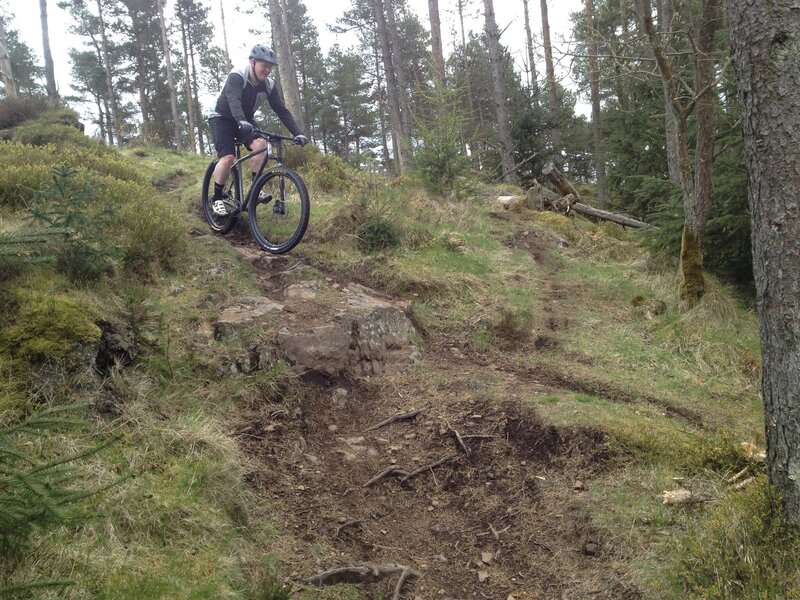 So how does it fit? Perfectly. Predictable I know given it's a custom build, but there was always a tiny little voice in the back of my mind saying "What if it's crap?"
It was a bike I wanted to use for riding from the door, hence the high rolling 29" wheels. 40 mile rides no niggles, just tired legs. Difficult to do justice to the feeling of something that's "just right".

So, a years on what's changed on it? Well, apart from grips and tyres not much, until one day I was cleaning........

(The observant amongst you may notice that it's not the same colour as the BOTM photos, but that's a story for another day, as I've maxed out on attachments) 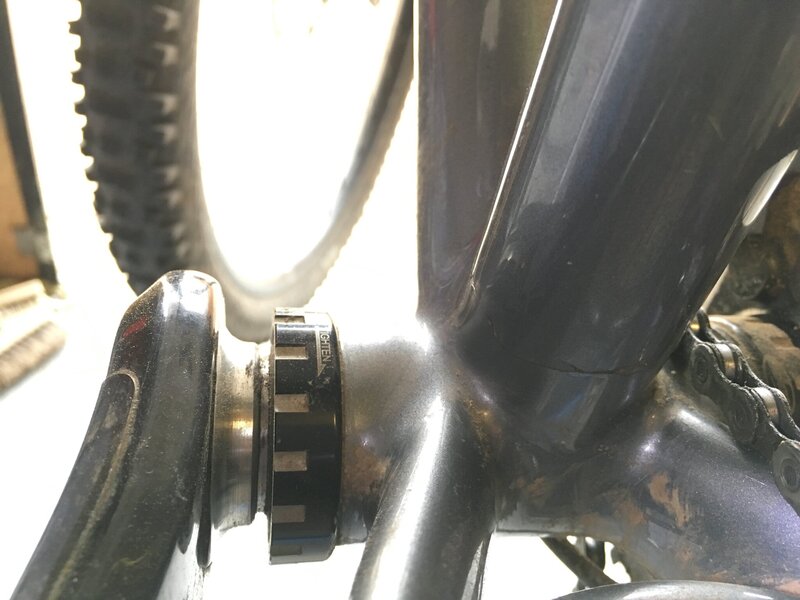 Yes, the seat tube had cracked half way round. Glad it was steel, as the frame was still rock solid with not even a creak.
(After I'd stopped crying) I did laugh at the fact that this was tube we didn't go for the carbon option on as it was a risk strength wise.
Took a few photo's and sent them off to the builder and within half an hour had a phonemail back. Matthew was horrified and asked for the frame back for inspection. Frame has a 15 year warranty and being fillet brazed steel, it would be no problem to remove the tube and replace it.
After stripping and full inspection, he let me know that all the brazes were fine and the tube looked like it failed at the end of the butting. He ordered a new tube and then I took my place in the build queue again. Thankfully this time the frame was ready by August and I had the option of having the same paint job redone or go for something completely different. By now, Saffron had moved their paint finishes in house and were regularly winning awards for their colour schemes. The multi colour schemes didn't feel right for that bike but I did fancy a change and started looking at blues again. I found a lovely Pantone colour that I liked but was told they wouldn't be able to match it, but if I found a car colour I liked they could easily use the RAL code to get a match. Sitting at a set of traffic lights on the way home from work one night and right in front is a new Mini in a rather fetching blue colour. Googled it when I got home and the colour was Island Blue. Choice made then.

(Everywhere apart from this site, only joking

) drivetrain technology had moved on so I decided to upgrade to 12 speed Eagle AXS wireless shifting. Rockshox had brought out the underbar lever for the Reverb, so I also changed to that and changed the qr rear axle for a stealth bolt in one. Old one worked fine, but tended to gather undergrowth when the grass got long, plus the bolt one looks sweet as. Not needing a rear mech cable, I also changed the cable guides to single strand ones, for the rear brake only. They just bolt under the down tube and the new ones really clean up the looks from the side. 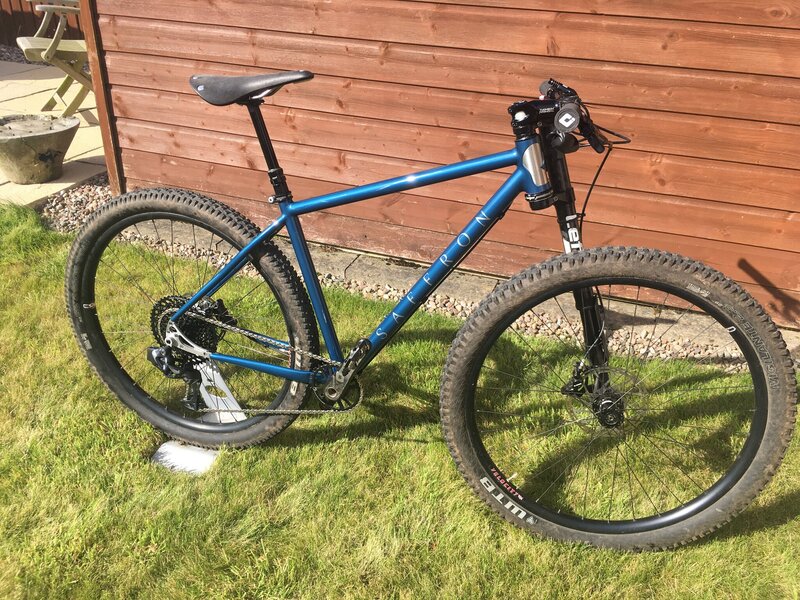 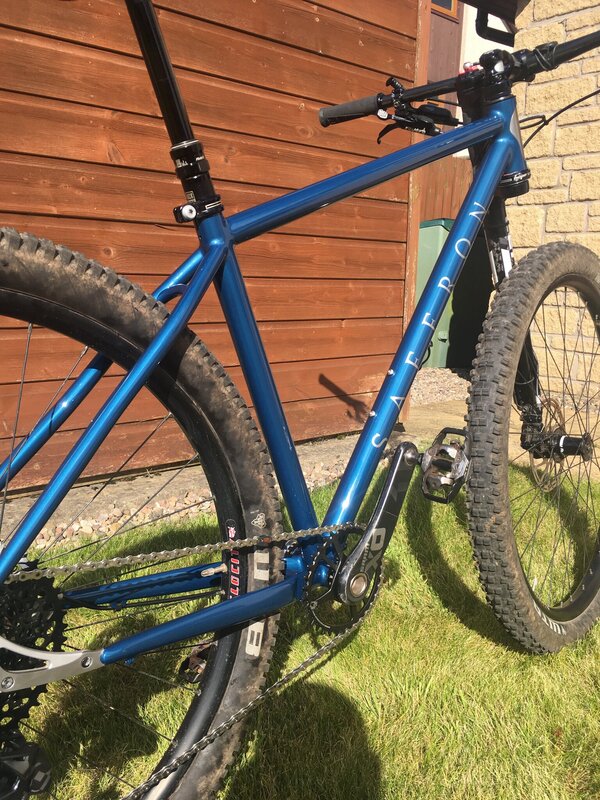 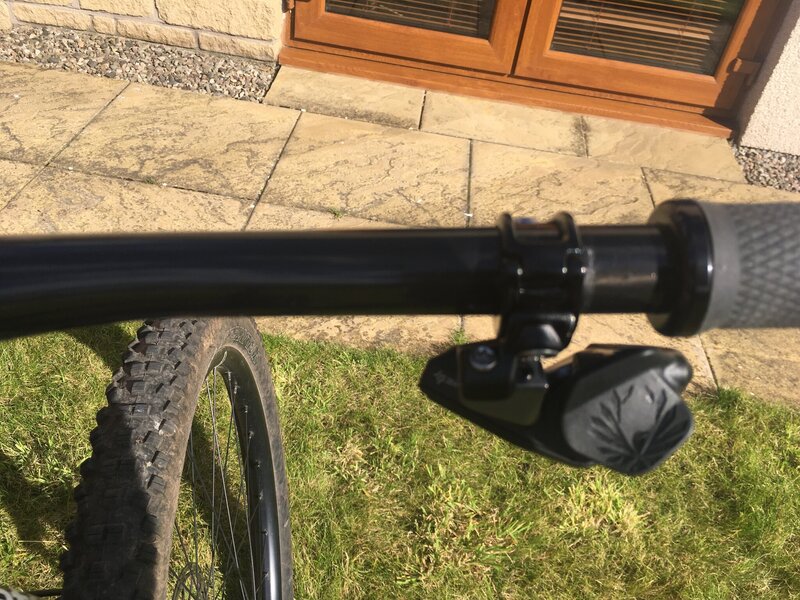 Roll on to just before Covid became a thing. Spring was coming and the trails were drying.
I was loving the AXS shifting and my poor old Reverb had developed the droop for a second time. Instead of yet another service I went for one of the new AXS version in a slightly longer drop. I didn't really need the extra drop, but it meant that the seatpost collar would be pretty much much flush with the frame clamp, which just looks so much better. The new version of the post also has an air bleed valve so you can sort out any droop at home, although to be fair, after 18 months it's a lot more robust than the old design and hasn't needed touched. Another tyre change put me on skin walls, which I think suit the classic style of the bike. Since then nothing else has changed and I just love getting out and enjoying the local area. I have some really nice flowing trails just on my doorstep. 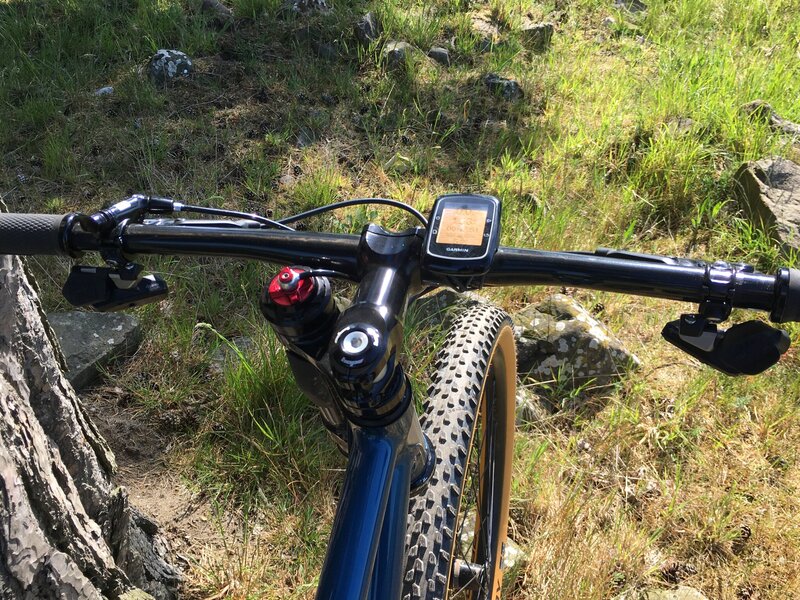 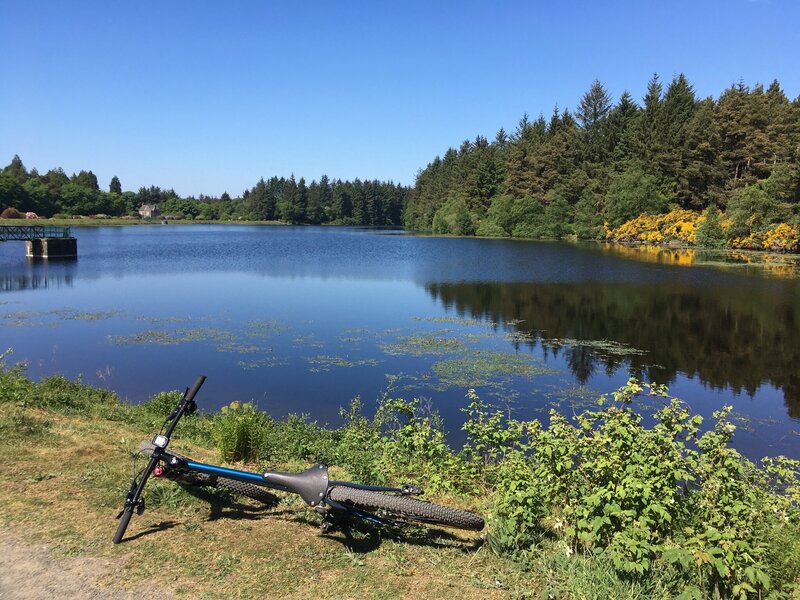 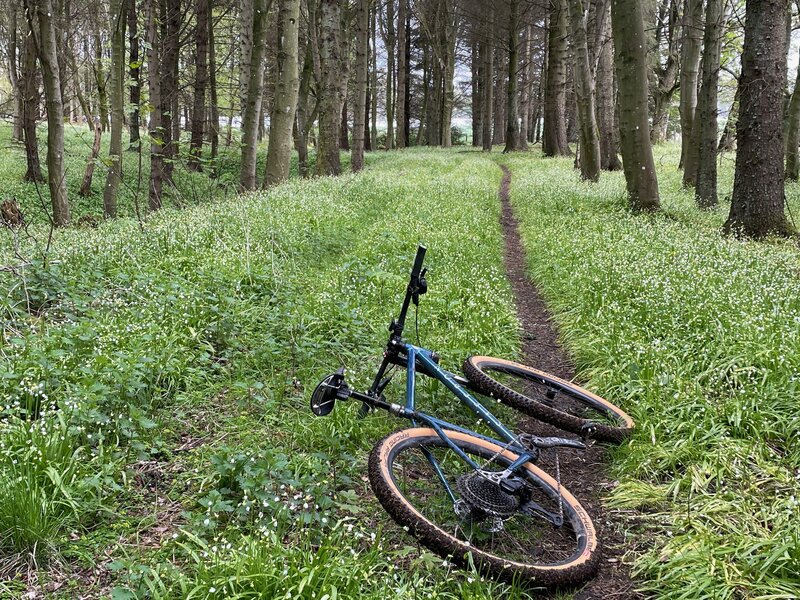 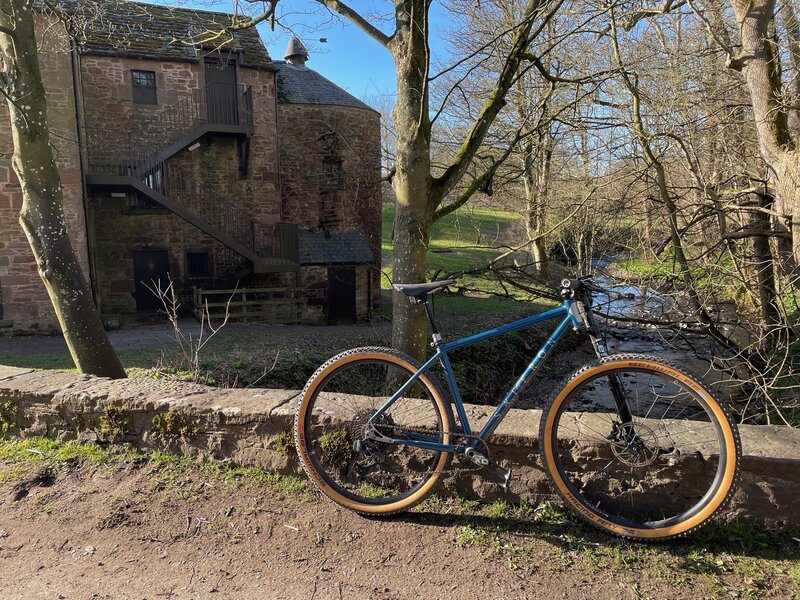 Since I commissioned the frame, bike design and geometry has moved to the longer, lower, slacker dogma and my newer bikes are a very different to the Saffron, but somehow the bike stills feels perfect. On paper it looks so wrong but for going out and riding for fun, rather than chasing Strava times or riding the gnarliest trails, it's prefect.
Last edited: Sep 13, 2021

Stunning bike. Prefer the newer colour but not the amber walls

haggis said:
Stunning bike. Prefer the newer colour but not the amber walls

Choosing colour was the most stressful thing ever. So long to think about it but also infinite choices. I have total respect for people that have the courage to commit to a big paint job not quite knowing how it will turn out.

This bike is awesome, both paints look great, and I think the lefty looks pretty great even though I'm not usually a fan of that aesthetic. It looks like a blast to ride. Thanks for sharing!

That's ace. Very cool and like the story behind it.

What cassette are you running?And what's the chainring number? Love the colour

tintin40 said:
What cassette are you running?And what's the chainring number? Love the colour
Click to expand...

Thanks, was worried I was taking a risk changing the colour but really happy how it turned out.
Cassette is GX Eagle 10-50 and chainring is NX Eagle 34T. Frame was designed with clearance for up to a 36. NX ring weighs a ton, but it’s steel, so it’ll last forever and was only £15, compared to a Sram alloy one at nearer £70! Have tried non Sram rings on another Eagle equipped bike and performance just isn’t as good as the genuine profile.
You must log in or register to reply here.

On One Vandal (Titanium) bargain
2