Just throwing up a wee thread since I have entered BoTM this month with my Pace.

I bought this frame in late 2011/early 2012 I think, just before I discovered 29ers and fat-bikes, so its first build took a while, and then it barely got used. I felt guilty about this so built it as a fixed gear bike so it could fill a wee niche and remain part of the collection. Still never rode it!

So then it sat unloved in the loft for a while until some other changes in the fleet meant it could have a new purpose. So I built it up as a rigid single-speed in 2018, and now it is one of my main bikes during the summer months. I transfer over to the single-speed Pugsley when the weather turns, but I really enjoy the nimbleness of the 26" wheels on dry trails. So that's the back story. Now for the bike.

Pace launched these frames in 2010. Built in Reynolds 853 with fillet brazing over tig-welded joints. Not the lightest construction method but it does look lovely. Has slide-out dropouts so it can run ss or hub gears and can take a 100mm-130mm fork.

I built it up with a mix of bits I already had and a few parts I bought specifically. That may explain some of the strange colour combos!

So the build is largely British parts (or at least British based companies).
The fork is a Genesis from the 29er Fortitude Race. I have a Fortitude Adventure which rides really nicely, so when I saw these forks on sale I bought one 'just in case'. Well this ended up the perfect case. The Fortitude was a 29er but built with a rigid specific geometry, so the very nice steel fork has the ideal A-C for a suspension corrected 26er frame. Shame it's orange, but I tell myself it harks back to old Marins!

The rims are Halo and I bought them specifically for this build. The rear Hope trials hub I already had, but I couldn't find a silver front Hope at the time so I bought a red one, for a red, white and blue wheel build! Built the wheels myself with my usual DT db spokes. Tyres are Charge Splashbacks.
Brakes are Hope Tech Evo M4 which i already had. Other Hope bits are headset and seatclamp.
Bars and pedals are DMR and saddle is a Charge Scoop.
Cranks are Middleburn.
The only non British parts are Thompson seatpost, Shimano BB, Surly chainring, Odi grips, BMX stem (which I can't remember the make, think it might be Stolen), spokes and inner-tubes. Not too bad considering I wasn't trying that hard!

The bike is not the lightest build, but then, neither am I. Has just the right balance for me of being a bit of a hoon bike, but comfortable enough for my ageing body, and I love how nimble 26" wheels feels after riding fat-bikes and 29ers. And it's a Pace! I'm glad it finally found its rightful place in the stable! 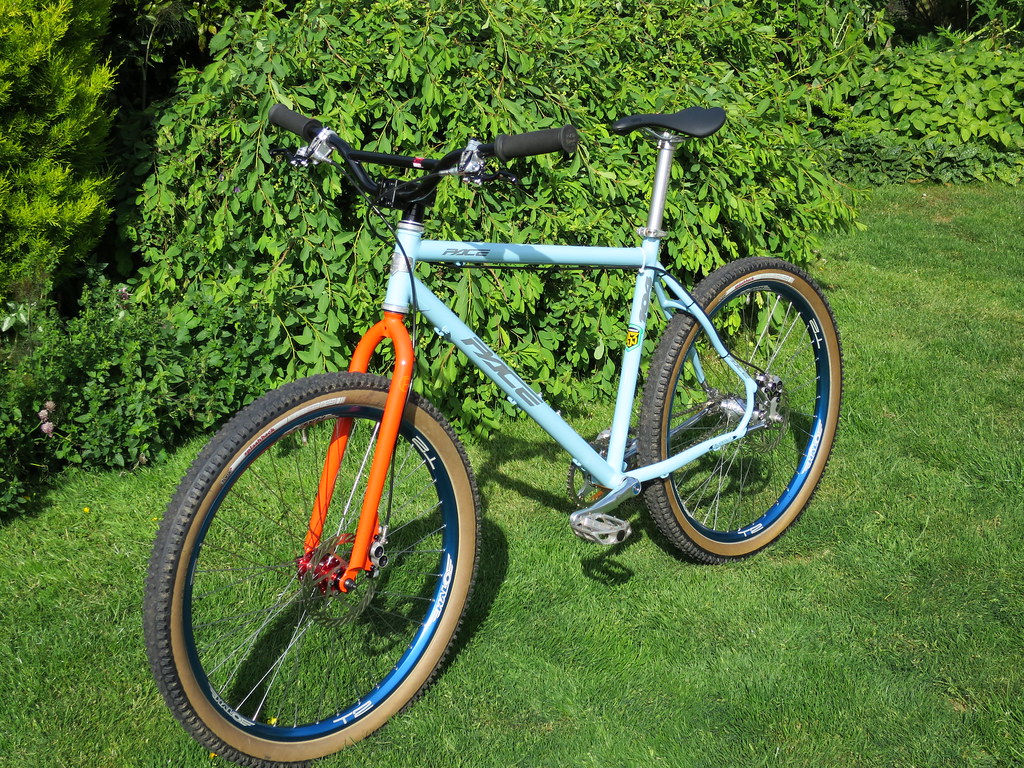 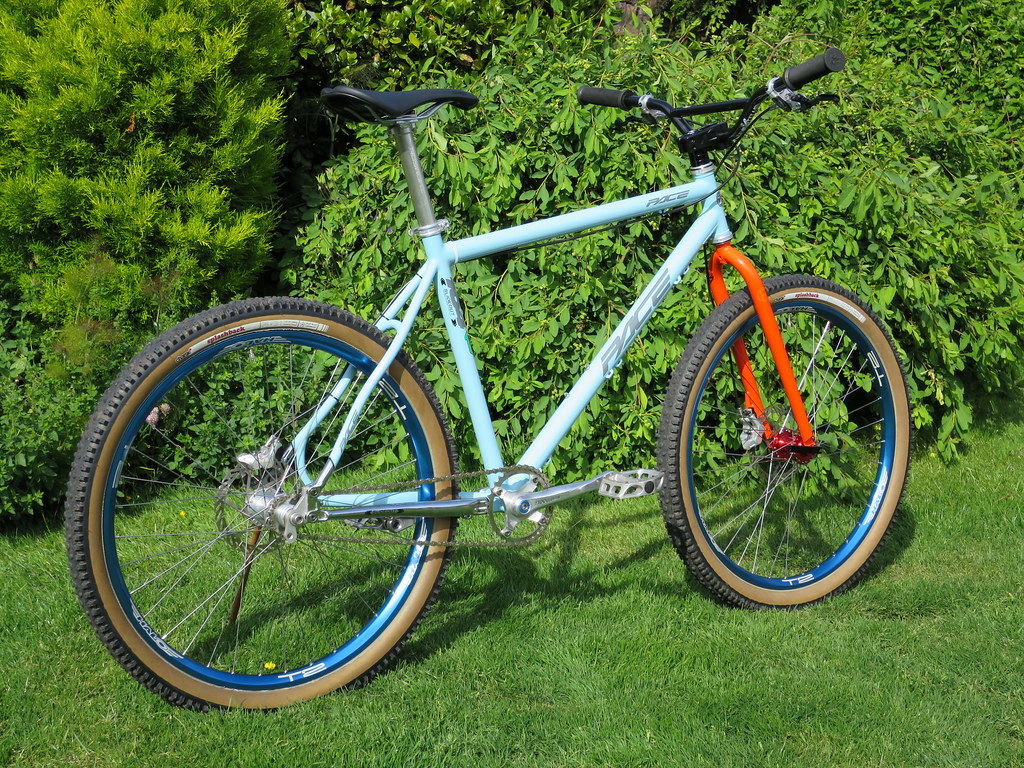 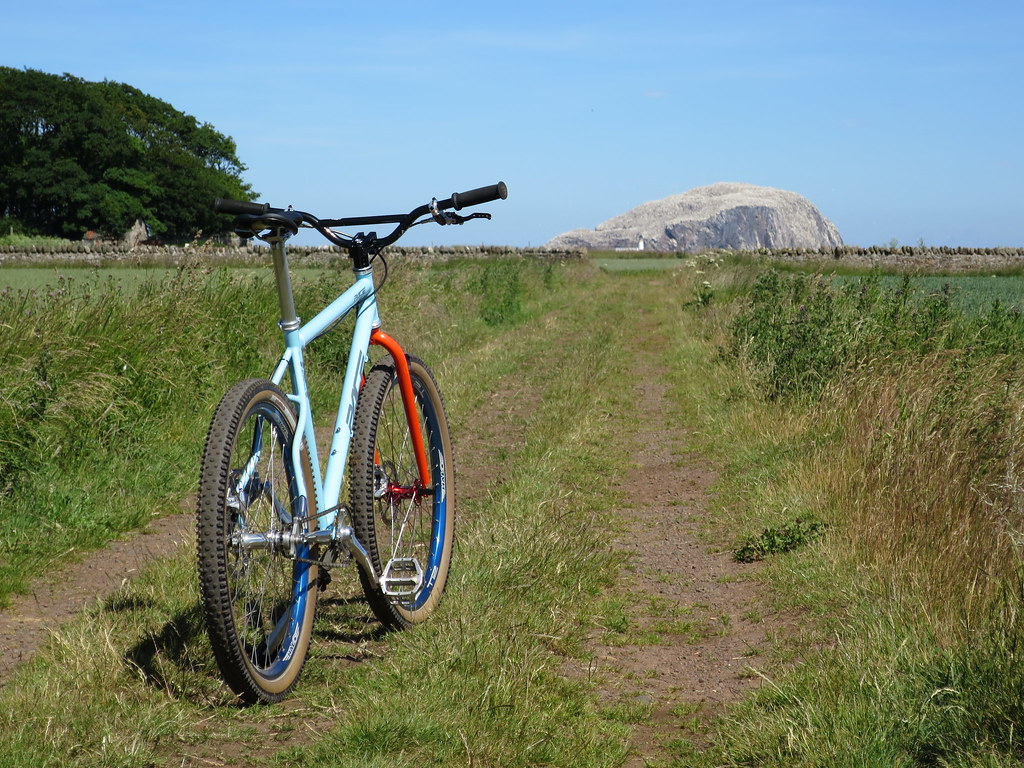 These frames ride great, loved mine. Ran it singlespeed, rigid too but it unfortunately cracked and was a bit thin to fix. Drilled the crack ends, ghetto sprayed and rode it another year then finally got rid last month when it started to get worse.

Kevhl said:
These frames ride great, loved mine. Ran it singlespeed, rigid too but it unfortunately cracked and was a bit thin to fix. Drilled the crack ends, ghetto sprayed and rode it another year then finally got rid last month when it started to get worse.
Click to expand...

That's a shame!
Cheers for the heads-up though. I'll keep an eye on mine.
Just out of interest, what seatpost were you running?

!! 1 question about the cog; how many teeth does it have??

firedfromthecircus said:
That's a shame!
Cheers for the heads-up though. I'll keep an eye on mine.
Just out of interest, what seatpost were you running?
Click to expand...

Great big long RaceFace post, couldn't put it down to lack of post insertion unfortunately. Either leg strength was too much for it

or I was unlucky.

!! 1 question about the cog; how many teeth does it have??
Click to expand...

firedfromthecircus said:
Thanks. Think this is running 33:15.
Click to expand...

Appreciated, thanks!
You must log in or register to reply here.

Orange Stage Five... Not even a little bit retro yet