New member who is very happy with the forum.

Well I feel a bit of a charlatan , I have a little bit of spare time and decided that all the various issues and niggles we had on the bikes were going to be fixed so I needed some suitable parts. As my bikes are old I couldn’t find any bits and pieces in the regular places, so started hunting the net and found plenty of links to this place. Hence feeling like a charlatan as I only came her to pillage parts, but since I am here I may as well show some of the clunkers I ride.

~1991 My first real MTB ~ 1991 was a 90 Stunt Jumper , yellow with purple decals and black forks. This was a replacement frame for someone else’s damaged frame, replacement frames always came at that time with black forks. They didn’t fancy it so I got it quite cheap and then built a bike around it I have a picture somewhere that I need to find. This was borrowed by someone and never returned so I only had it for less than a year.

~1992 I got a 91 Gary Fisher Evo -Montaire farme set from Mark and Doug at Coombes Cycling in Hereford. I always bought frames and then added my bits and bobs. This served me well and was used primarily as a street bike in Edinburgh for 2 years until it was run into the back of a bus at high speed going down Bruntsfield place. The bus had to be removed from service as I detached the back panel and did some electrical damage, i had to be cleaned up in A & E on the other side of the meadows. The bike had some more permanent damage as I snapped the frame below the e stay. Luckily a call to Doug informed me that there fleet of hire bikes was being changed and they had 5 or 6 E stay frames for sale and they had all had a gusset brazed on in at this weak point. The old frame was chucked the key parts salvaged. I sprayed the new frame over the summer holidays and this was my pride and joy having shocks very rare and I was still ex-cyclo-cross so ran drop bars. This lasted all the way through Uni and then as a pub bike until life got in the way and it just got ferried between houses until about 2010 when it was fully stripped cleaned and rebuilt. 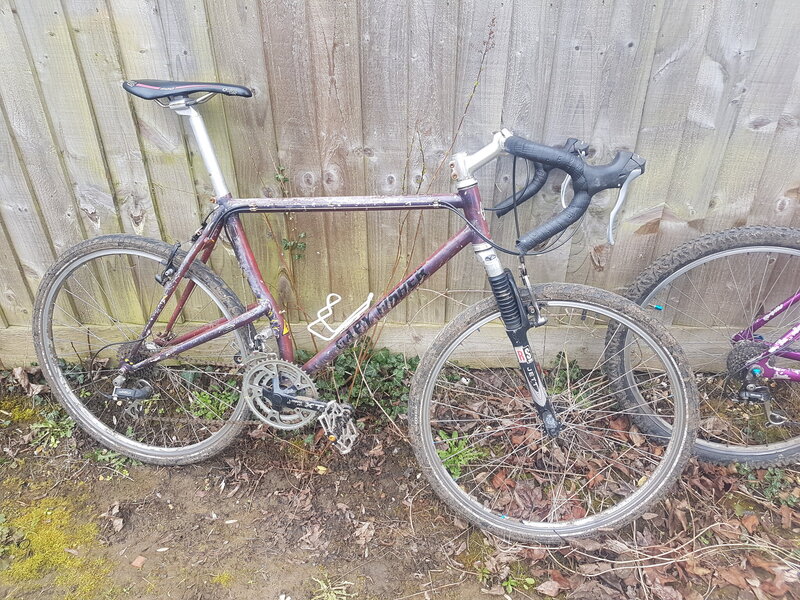 ~2012 I got a puncture , the chain needed cleaning and a pedal was squeaking all of which meant a quick look on gumtree for a usable pub bike. I found a “Men’s bike purple” for £30 or £40 just around the corner. If you look at the time line I was really into mountain biking around the earl nineties when muddy fox was sold by very random LBS and not seen locally as a quality product but did have a massive range so I may have only seen the crap ones. SO this was the purple bike. 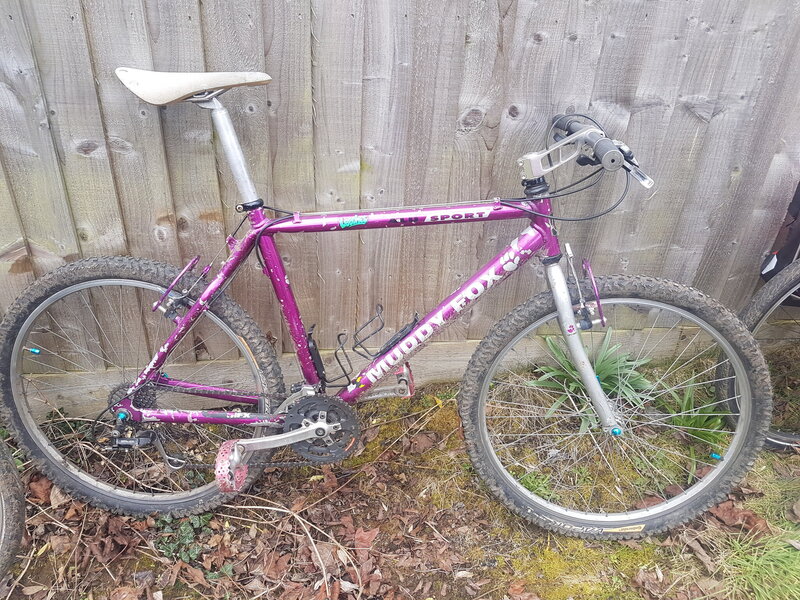 It had just been serviced and came with some random tasty bits as shown. This was dully pressed into service and I really liked it so much so that I rode only this for around 4 years and leant it to people who were also impressed by it.

~2016 and my son is old enough to wheel and its time to clean the Gf up. This was cleaned, oiled new inner tubes and then sent back into service.

~2017 I felt the desire to look into cyclo-cross and this frame came up, duel win as it was cheap and means I can get to the pub a bit quicker than on an MTB ( No more info as its too new and boring) 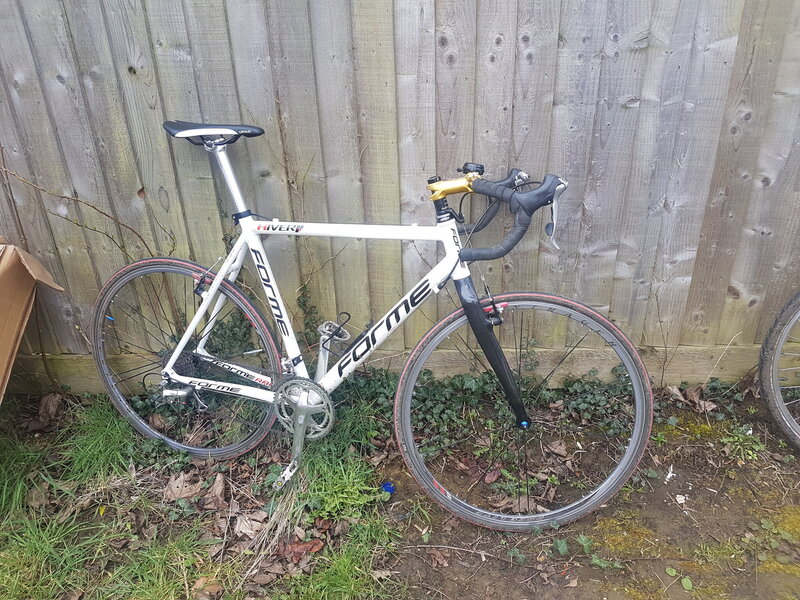 ~2019 Before the , My son is now 7 and we loving getting out and about but he gets tired of the same old places and tired in general – TANDEM. So I went looking for tandems which I knew you could convert with pedal adapters only to find a late 90’s Thron Voyager Kiddie back. This was purchased the week before lock down on the opposite side of the country so it stayed with the owner for 4 months till we could collect. This was a god send as longer 2-3hr trips where no within reason. Again this isn’t an MTB but shares a lot of MTB parts being 26”based and has been updated as we have used it a lot, but wil probably sell this soon as my son is getting a bit cool. 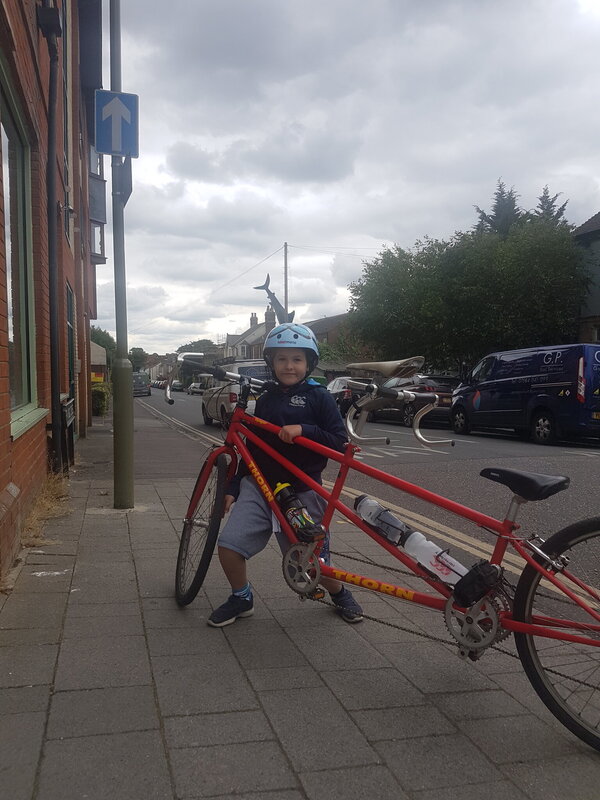 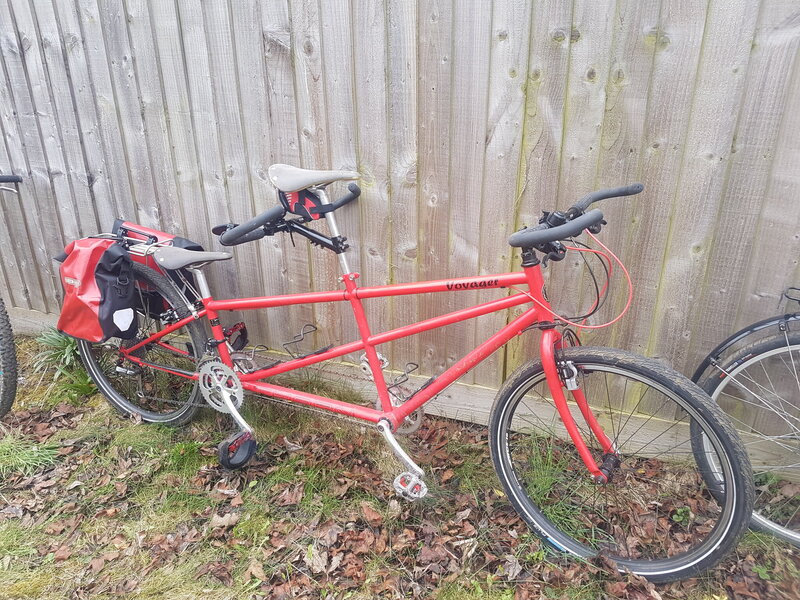 This is my wife's mumma’s bike as I get told by the Dutch I work with. Again not MTB but has an interesting slide suspension in the down tube and yes it should be a 700 in the back but I found a 7 speed nexus on a 26” which fits the bill best. 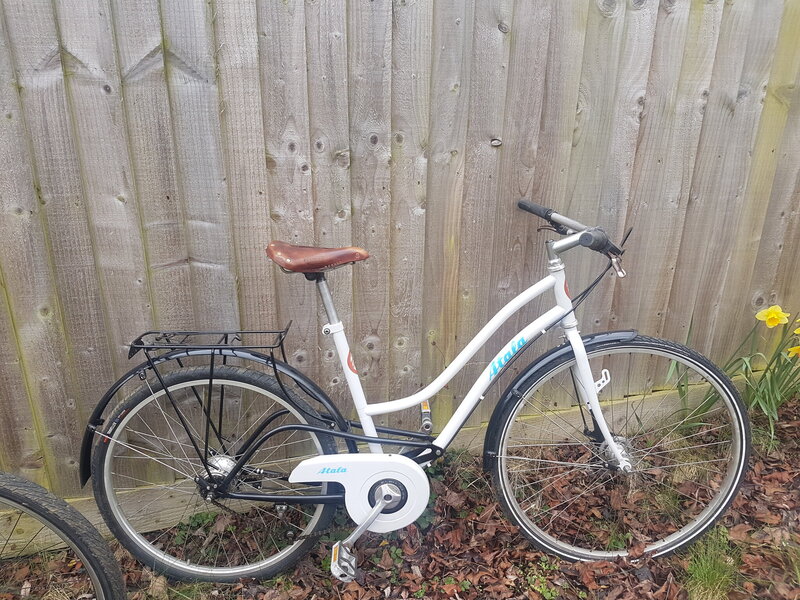 Those shark tooth pedals on that Muddy Fox used to make a mess of my shins!
M

Yes the Shark is in Headington

That kiddieback is cool, hoping my daughter will be interested enough for one in a few years, she loves the Cargo bike so fingers crossed.

I have a soft sport for Forme bikes. Completely unknown really (except they are are owned by moore and large) but cracking bikes. the Thorn is lovely, I still service my FILs custom fit one, although he has had to move towards a E bike as his knees are more plastic than bone now.
GF, doing it before it was cool.
M

The kiddieback has been a superb buy as it extended the range of our rides and also got over a nervous spell due to a bit of uncertainty at roundabouts. Also you get instant respect from every other cyclist when you are on a tandem. The forme was a mistake as I dabbled in cx in the early nineties and fancied it again but it just doesn't get used.
The Dutch/ mama's bike is actually Italian and yes very comfortable.
You must log in or register to reply here.

T
A tale of two Scotts
2