Ahh yeah that would of been a nice surprise ,
I’m scrolling through the French brochures on that website but can’t find the page yet , to see what year it is ?

This what you looking for.. can you feel any groove inside the tubes?

Its def a peugeot from 1989 onwards with that fork crown and the dropouts . The lack of chrome on rear stays suggests its a basic 531 (3 main tubes )which they called the `531 pro` not to be confused with the earlier `professional PY10 ` that had full 531 professional ( red label ) tubing with the simplex dropouts and lion engraved fork crown and the top mounted cable guides. It might even be a Galiber like this that had the same lower spec frame but it`s really impossible to tell as yours has been repainted.

One or two puzzling bits but think I now understand. Am certain it's Peugeot as well. Here's a photo of some forks off a 1992 708 - the 'G' is identical. Didn't recognise the cut-outs in the lugs but when I looked at an old frame exactly the same. To confirm whether 708, simply look down the seat tube and there will be 8 flats towards the bottom of the tubing (708 tubing placed 8 flats at each end of the main tubes, where normally butted, although obviously seat tubes only had at lower end). Assume the G57 refers to frame size. Don't think 57 was available as standard size, usually 56 and 58, and the serial number is not usual factory numbers so I do wonder whether this was made by the Prestige workshop (I have some ex-team Peugeots and the numbers are very idiosyncratic). Here's a photo off the same 1992 708 frame; the cable guide isn't in place and you can see the more usual factory numbering system. Finally, the weights are 1869 frame and 689 forks, 56 cm size.

My initial thoughts were that it was Reynolds 708 but wasn't sure, all the features such as long spearpoint lugs with cutouts and side windows, lack of deep dimpling on the chainstays and possible evidence of chrome on the rear dropouts make me think that it's a Peugeot Prestige. The Peugeot Perthus cr 500 has long spearpoint lugs but without cutouts only side windows on the headtube lugs. Also possible it could be a Professional 1000 or a Racing Team cr 1000 both Reynolds 708 so probably all the same frames apart from colour, chrome & race number tab differences. Have a look for chrome on front dropouts and rear triangle, also original paint colour under the black.

Check out the seller's other listings ... 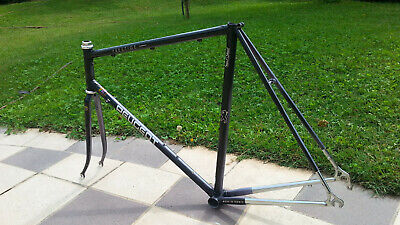 What makes this model special is that it's made out of the last evolution of Reynolds' 531 tubing saga - Reynolds 708. Reynolds 531 dates back to the early 30s and was used in all sort of constructions and for all sort of vehicles - including WWII fighter aircrafts and speed record breaking cars!
rover.ebay.com 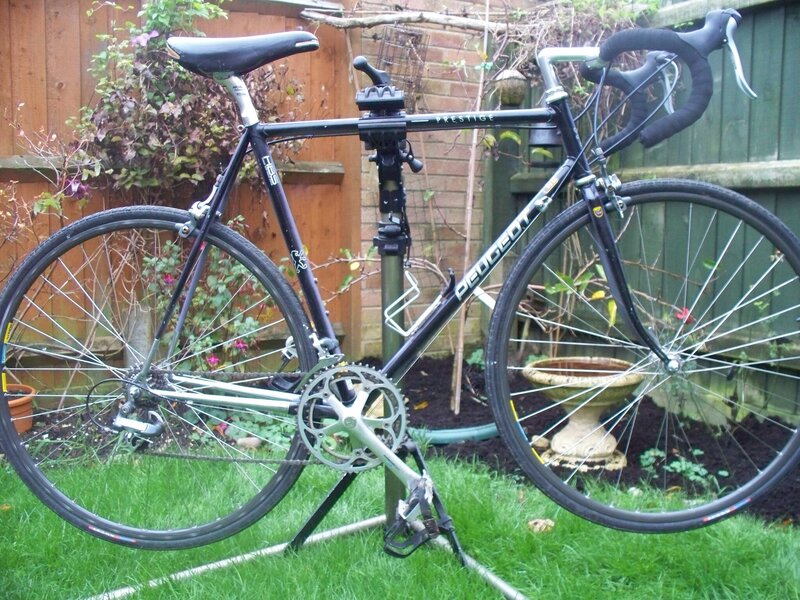 Thanks chat noir & vcballbat for delving into this .
so I managed to grab an hour earlier and cleaned out the seat tube and gently rubbed down a small area of paint on the rear triangle .
Results show that yes it does have the 8 flats at the bottom of the seat tube and the paint (disregard the black & red rust proofer , looks to be yellow on top of the white base coat & possibly not chromed ?
Hope I can find the time this week to get it fully stripped so we can see it back to bare state . 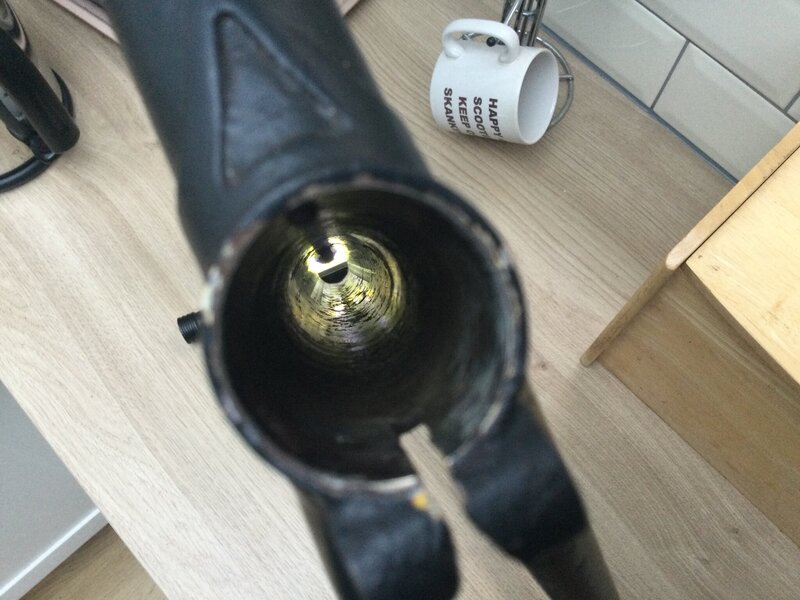 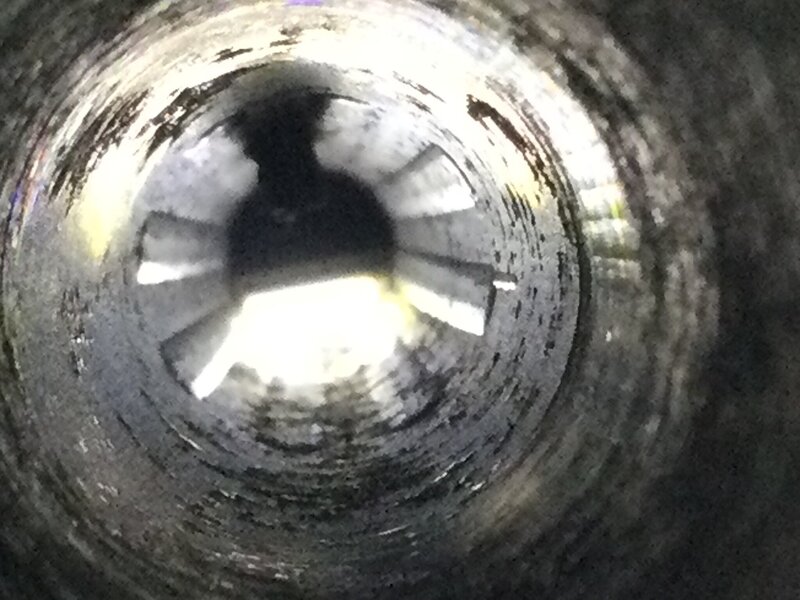 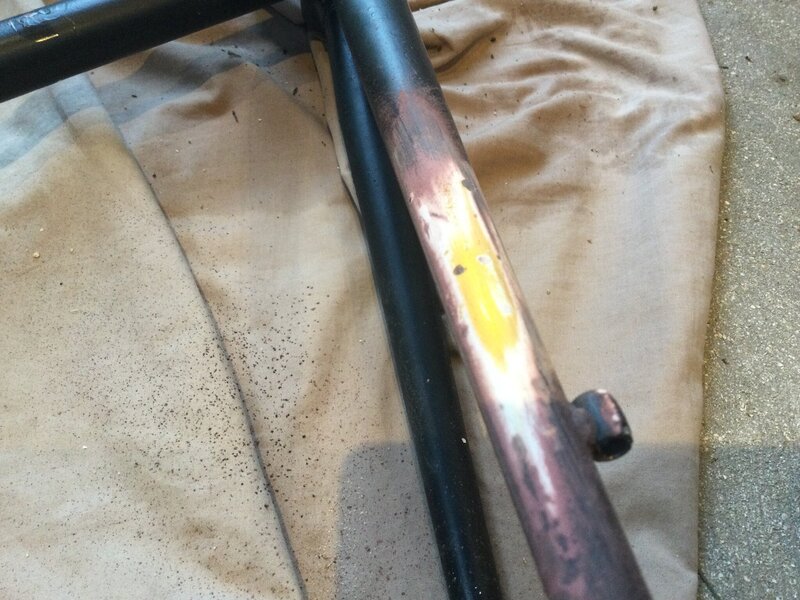 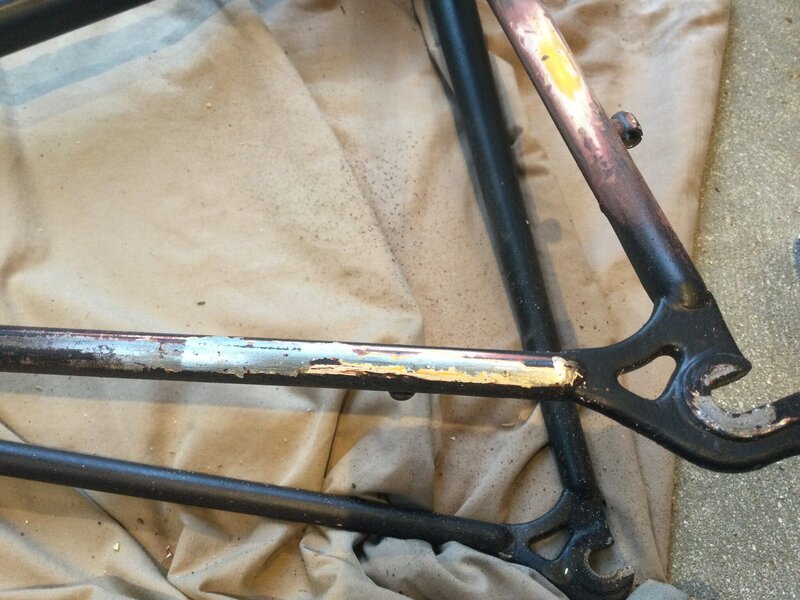 I posted a thread the other year with what may well have been the same frame, https://www.retrobike.co.uk/threads/peugeot-708.378076/ .

Finding the new-fangled site harder to navigate (don't seem to be able to preview before posting) but, if this works, should show you a similar frame and build with a few interesting scanned documents, not least the fact that it was yellow!

Wow.... staring down the seat tube has finally nailed it.. Reynolds 708 tubing. No chrome and evidence of yellow paint on the fork and rear triangle now points towards the Professional 1000 model. You must be blown away?... what a brilliant find, a top flight rare 708 Peugeot heavily disguised in matt black paint as a hack bike. Check under the front of the top tube for any evidence a race number tab has been hacked off..love it

Been paint stripping today , a couple of small dents & the chrome ends are revealed that have been partly rubbed down.
I wonder if the original colour was yellow & mauve ? It’s still shown on fork steerer and under BB cable guide . There’s no signs of old decals though .
Also I noticed the rifled tubing inside the fork steerer tube from the bottom up . 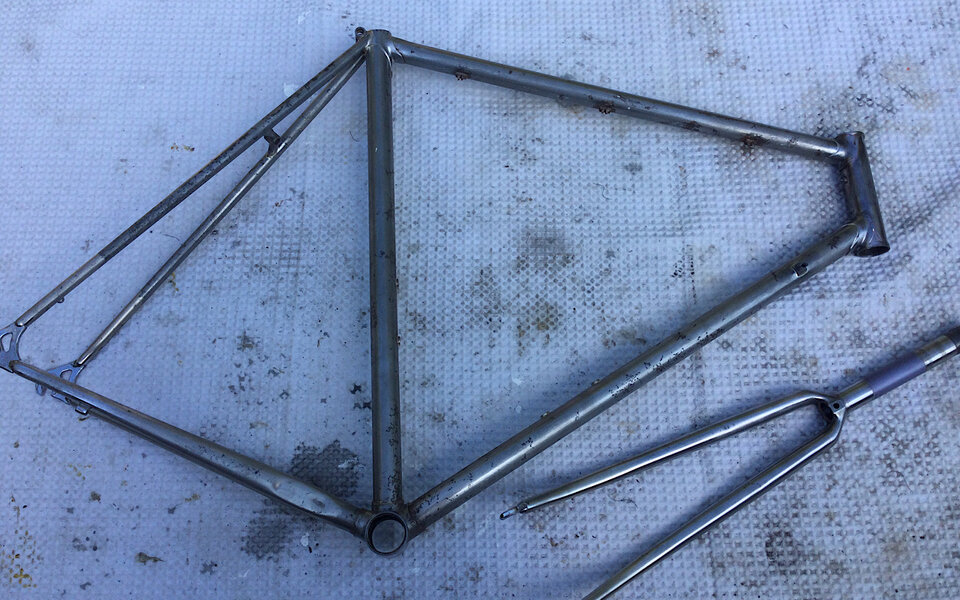 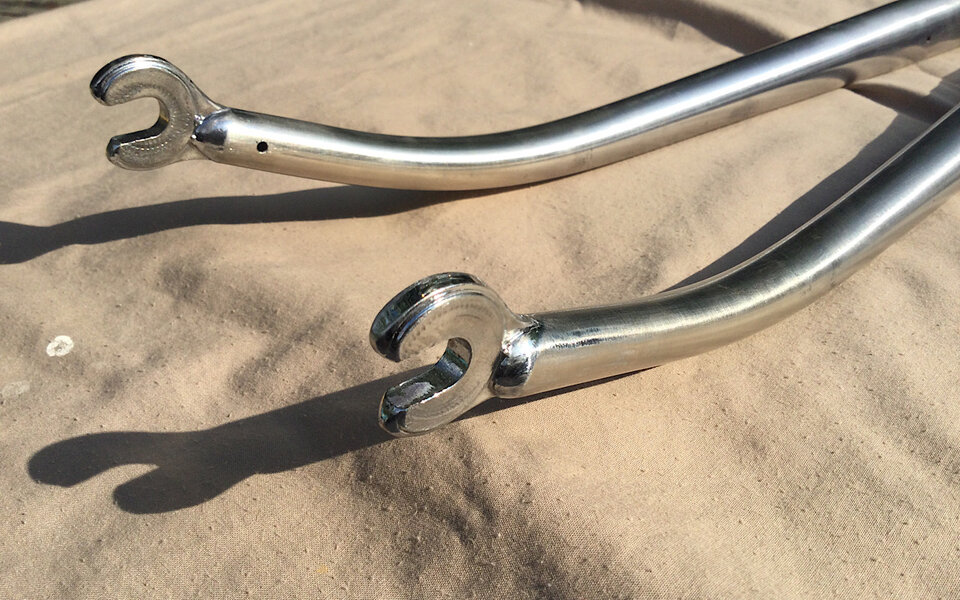 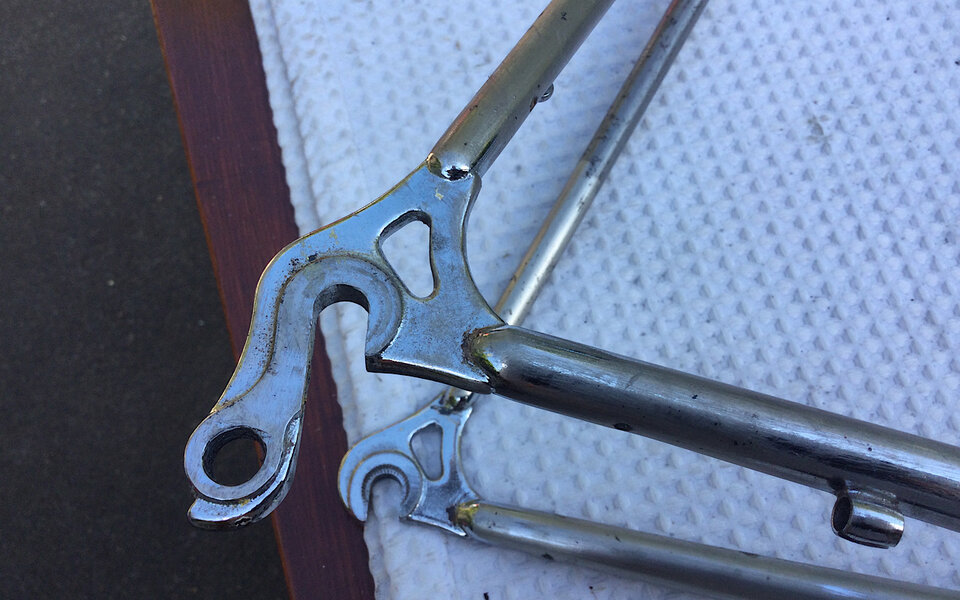 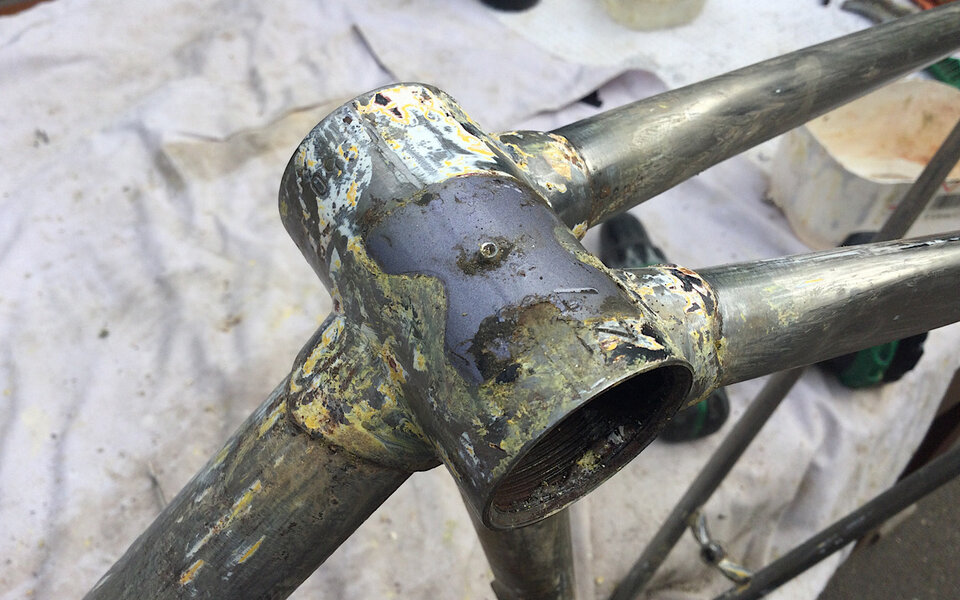 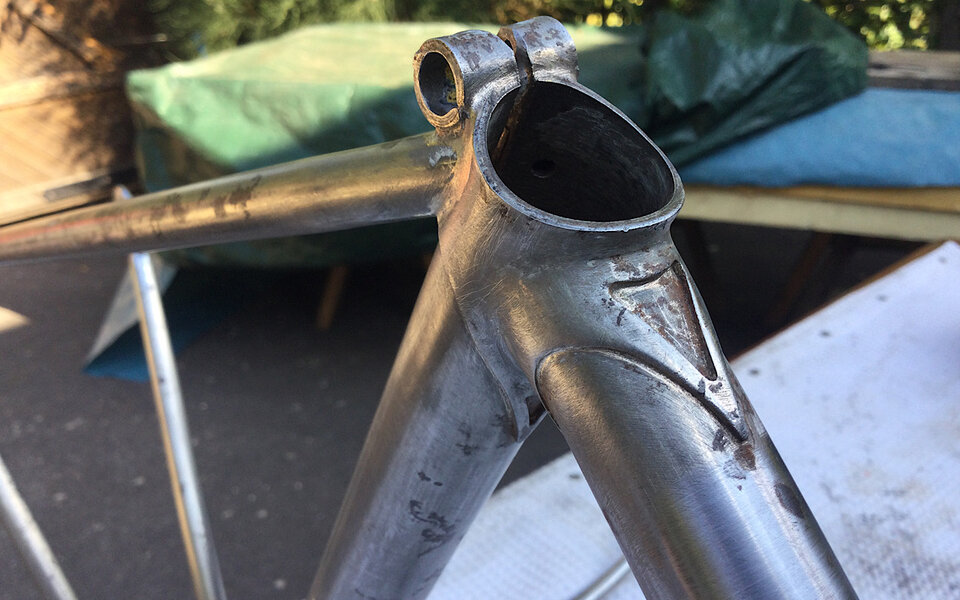 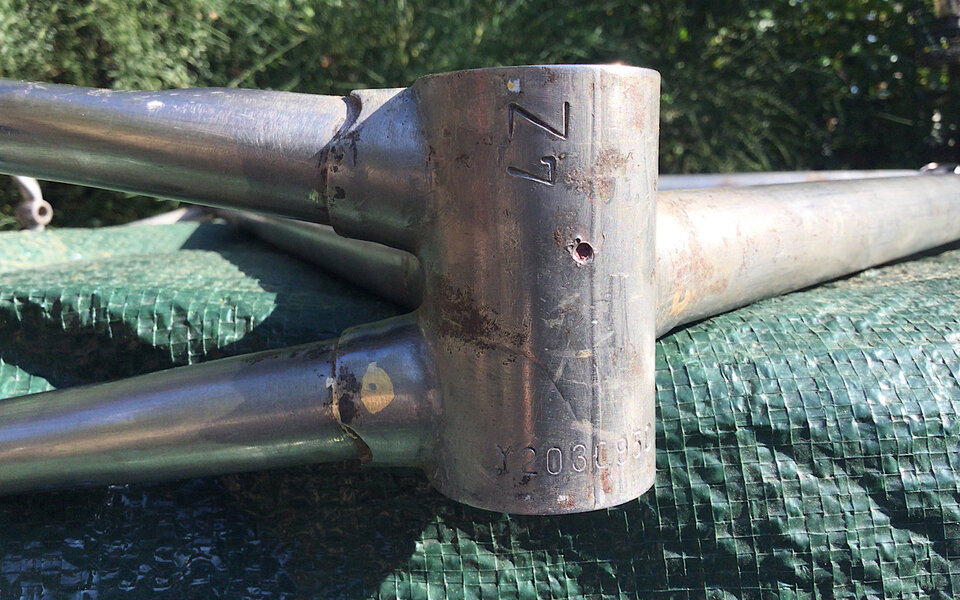 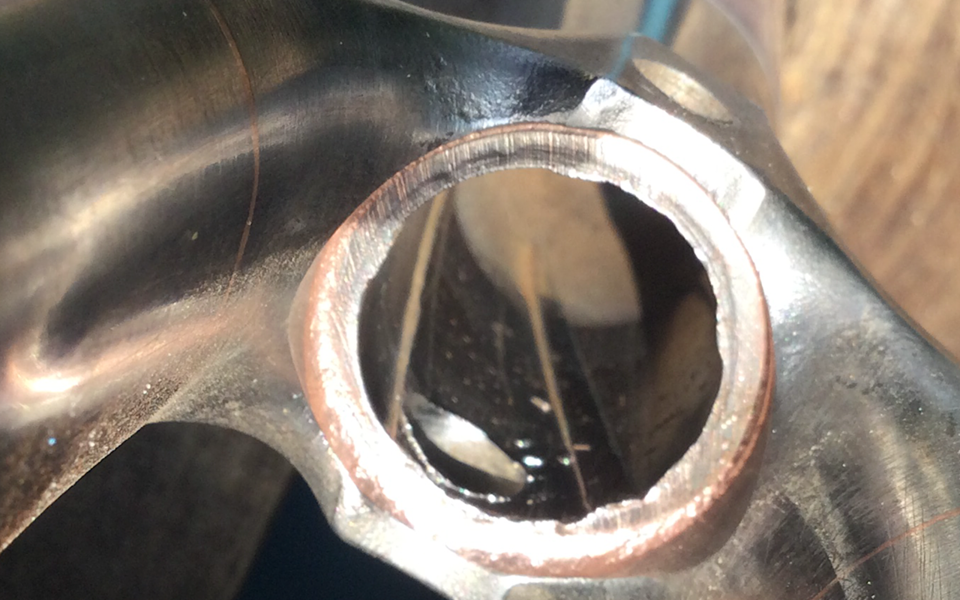 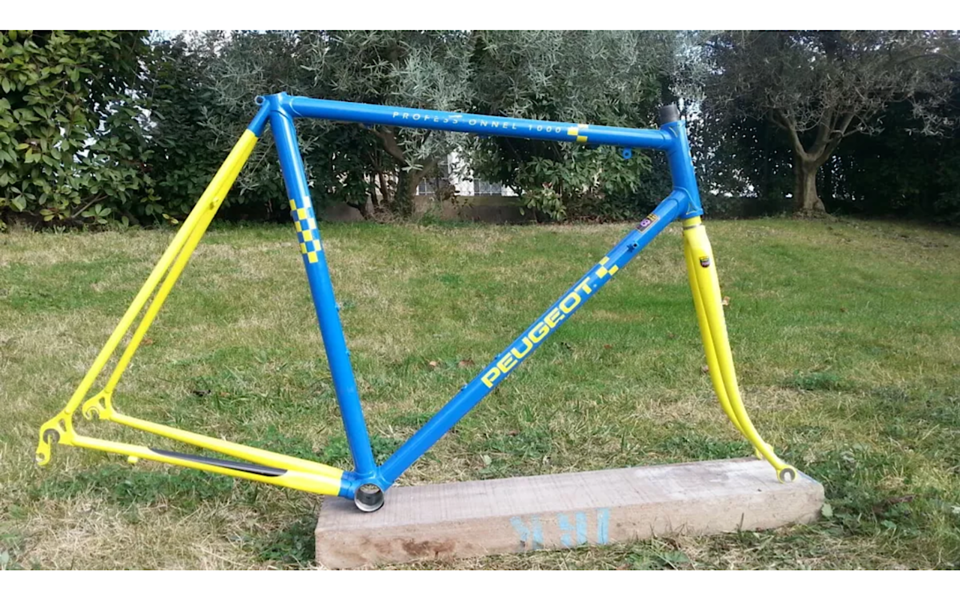