My take on an old classic...

So, bought this some time ago but had to finally admit it was just too small for me... :?

Next, SWMBO's Ex (who I do actually get on with better than she does! ) came round to see his boy; he had been trying to
find a spare pair of (disk) wheels for his modern Trek so he could have road tyres on one and off-road on the other...

...as usual the subject turned to 'How many bikes have you got?' Then, 'Got one you want to get rid of?'

I tried to flog him my purple Kili Comp but he didn't like the colour; then I remembered the Cinder Cone frame that had been
languishing, unloved, in a corner for some time...

...but he didn't like the colour! He liked my Wot II's red frame, so one trip to Clockwork in Eastbourne later... 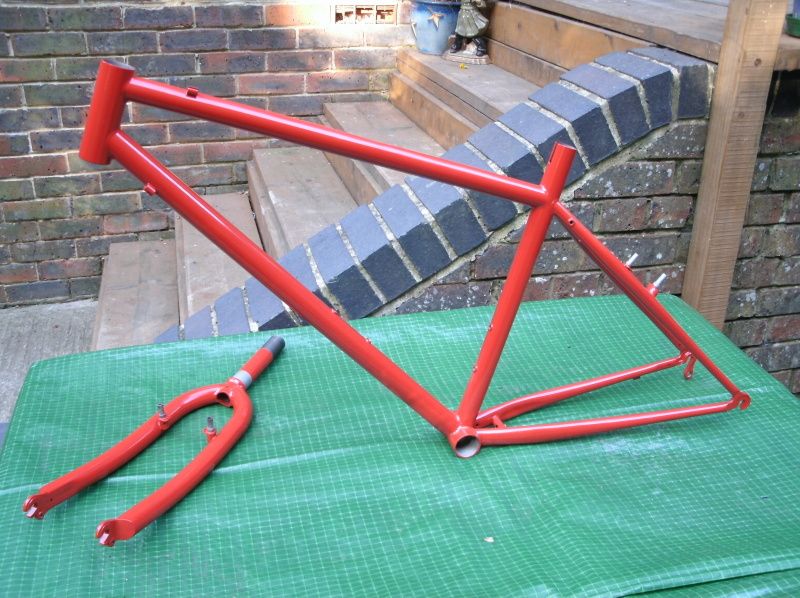 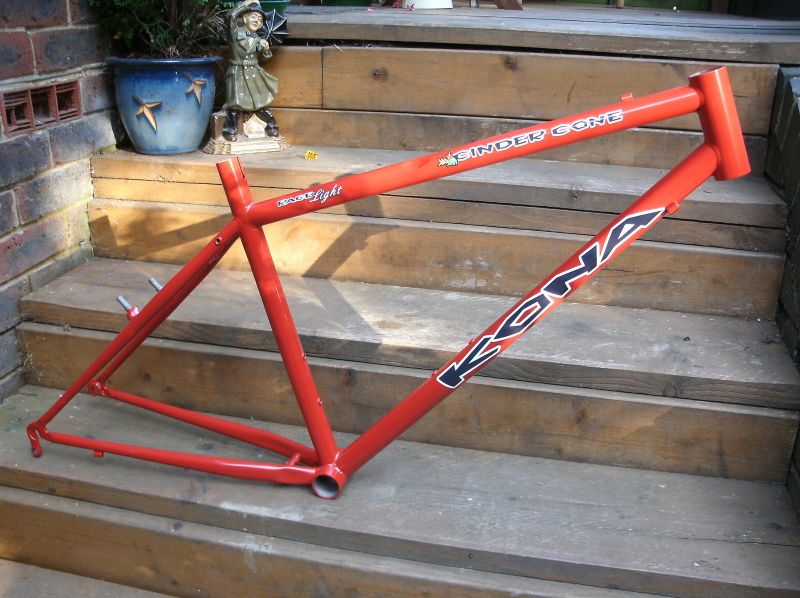 Looks great must be chuffed to bits.....

Pretty much; and so will he be when it's finished...

...after a couple or more hours this afternoon it's now a complete rolling chassis; just needs the rear brakes, chain and cabling up which I shall do next Friday as I'm off to Bristol in the morning.
A

Retrobike Rider
If your title is suggesting that you would like to know the year of the frame, from what's visible it could be 94, 95 or 96. The serial number would narrow it down, but I guess it may not be visible now.

You've given it roughly the colour scheme of a 97 Muni Mula which could be a bit misleading, but I suppose the decals being a mix up of 97 and 98 Kona styles with a non-Kona colour lend it a kind of timelessness. I personally think it would look better with 96 decals though, as there was a late-season 96 Cinder Cone that looked quite like that.

Cheers Anthony, unfortunately the serial number is non-existent as the evidence clearly points to the bike having been stolen at some point in its history (certainly not by the person I bought it from I can safely say though...) as when I cleaned the paint off to check I found that the number had been crudely filed off, filled with bodyfiller and painted over in a good match for the original; ditto the dent in the top tube.

The red was the soon to be new owners choice; and I really like black and white graphics on red paint

So, a couple of hours before I went to Bristol last week, a couple more on Friday evening and all I had left to do today was drill the
hole in the fork crown slightly bigger and fit the front brake cables; job done... 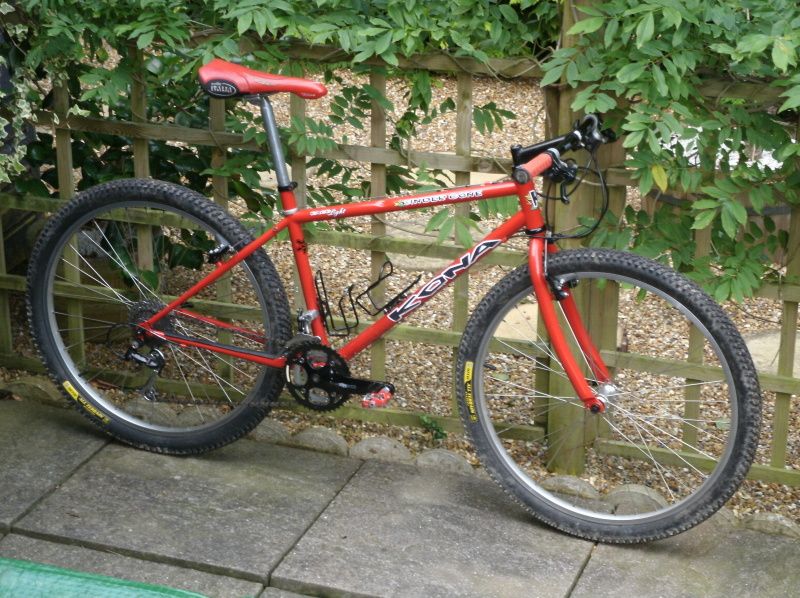 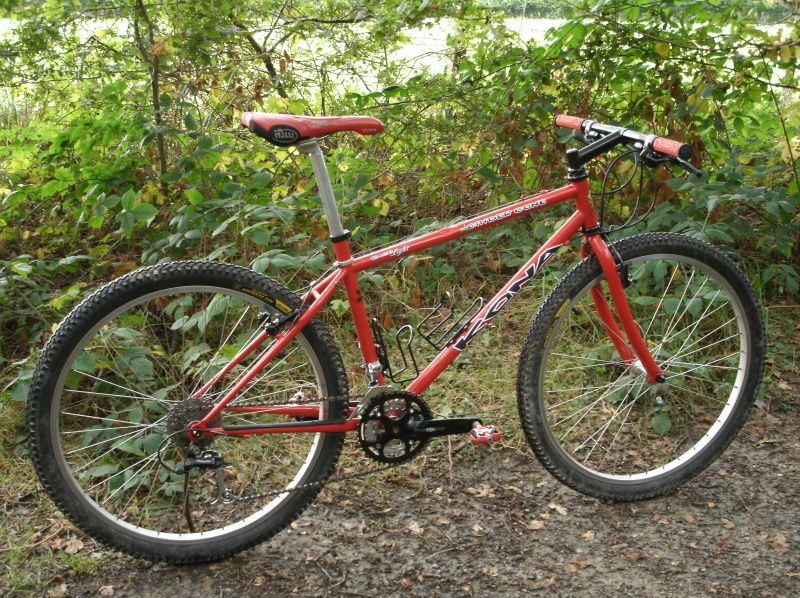 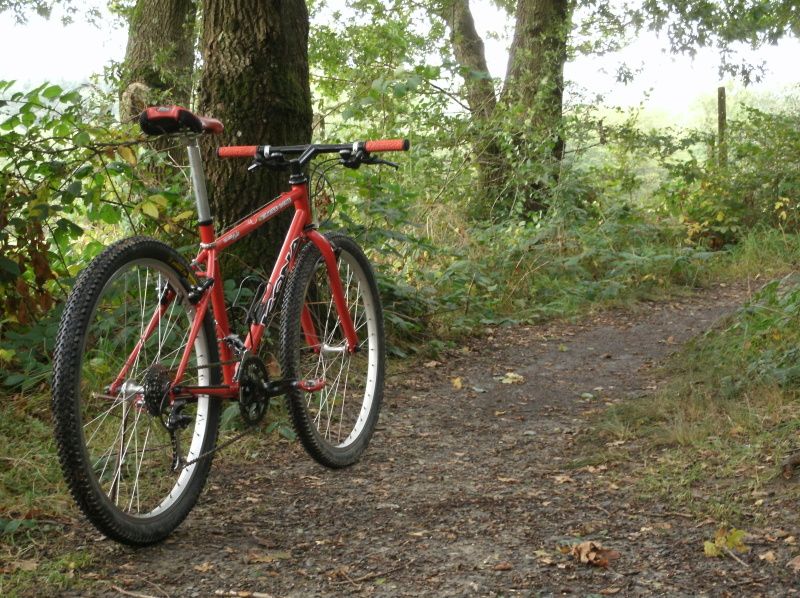 I'm really pleased with the way this has turned out, even if it isn't for me.

The idea was to build it using just what I had in the shed that wasn't going on anything of mine, and wasn't really suitable for a
'For Sale' thread. The frame (which was originally blue) I bought for SWMBO but it was too big for her, and too small for me; the
wheelset came off my original cro-mega; the fork, stem and brakes are from the Carrera that is morphing into my red Wot; the
7-speed STi's were originally on the first incarnation of SWMBO's Spesh; seat, tyres and grips from my Y2K Explosif; crankset is a
modern triple I bought for my RSP before I changed my mind ( ) but it doesn't look dissimilar to the Curves that Kona fitted so
looks kinda cool; SPD's are by Wellgo (just one of several red pairs I bought in an attempt to get them 'just right' on my cro-mega,
before changing my mind and fitting yellow ones instead!)...

...the only additional outlay was for the pair of Blackburn cages (I had one but two were requested :roll: ) and the black leather
chainstay protector because I didn't want to use up one of my dwindling stock of XT Sharkfins (and the copies are too naff). 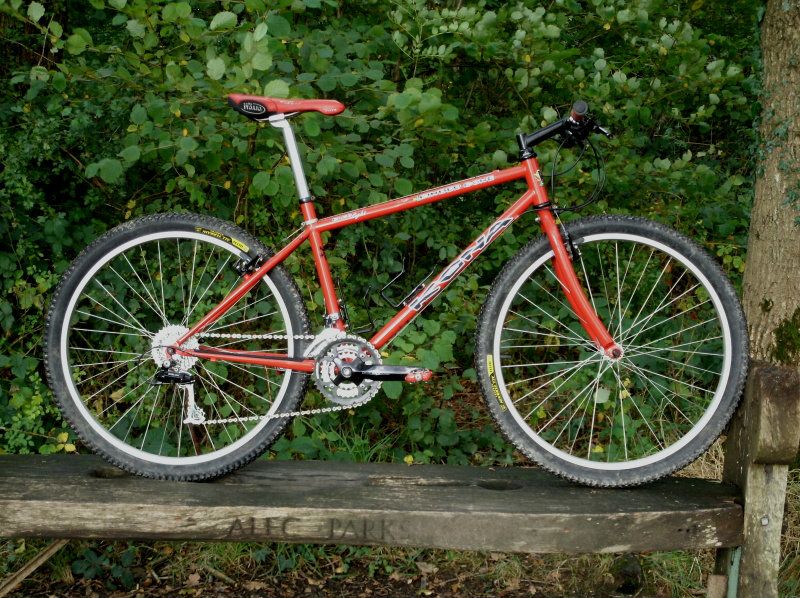 As usual I set everything up as I built it on the patio in the back garden; taking it for a quick 'shake down' ride for some photo's I
was pleasantly surprised that it all worked like clockwork; because the cables all came off previous builds they are all nicely
pre-stretched so nothing needed adjusting at all

I'm as sure as I can be that the frame is a '95; and this is the first bike I've built with a threaded headset... 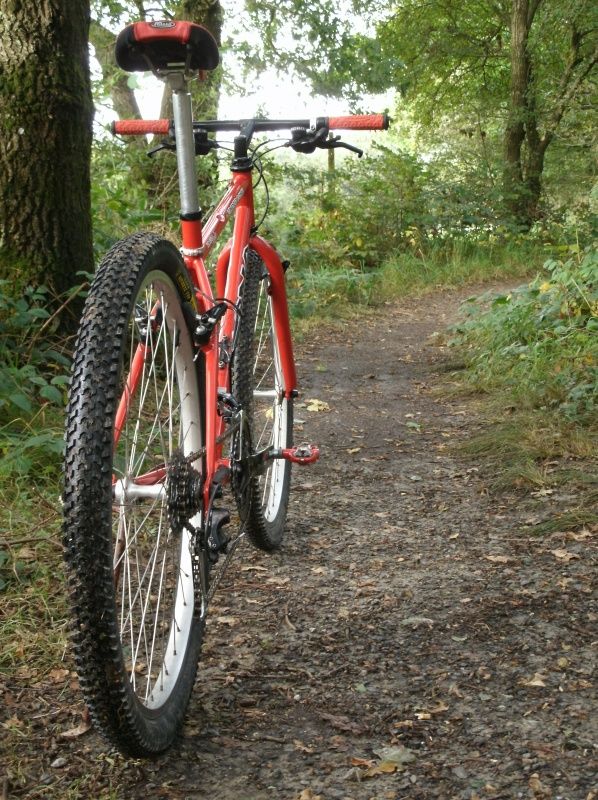 Now I'm quite envious that this isn't my bike, though I think the new owner will be more than happy with it...

Marin Fan
yeah that definitely looks fantastic. decals really do finish it off.

Have to admit it will be a bit of a wrench to hand it over to its new owner, but the cash will go towards completing another project so that'll sweeten that particular pill a little
You must log in or register to reply here.