I ended up with this frame in 1998 (although its a 97 frame according to the serial number) as a warranty replacement on a Parkpre steel frame that I cracked the headtube on. It came via Henry Gregsons in Accrington and Roger there mentioned the frame was coming from Ormskirk so I assume its a Merlin. So much for the chance of a Parkpre Ti he hinted at!

Bitd it had a Rockshox Indy C, ti stem, IRC mythos rustwalls and it was a rocket. Fast was just not the word for it! I'd go out on it twice on sunny days because I loved the addictive flat out speed.

In 2003 it ended up as my commuter and was slowly neglected until it ended up at my parents frankly worn out! The Parkpre decals were added by the shop as they were a dealer back then.

Here's it is abandoned 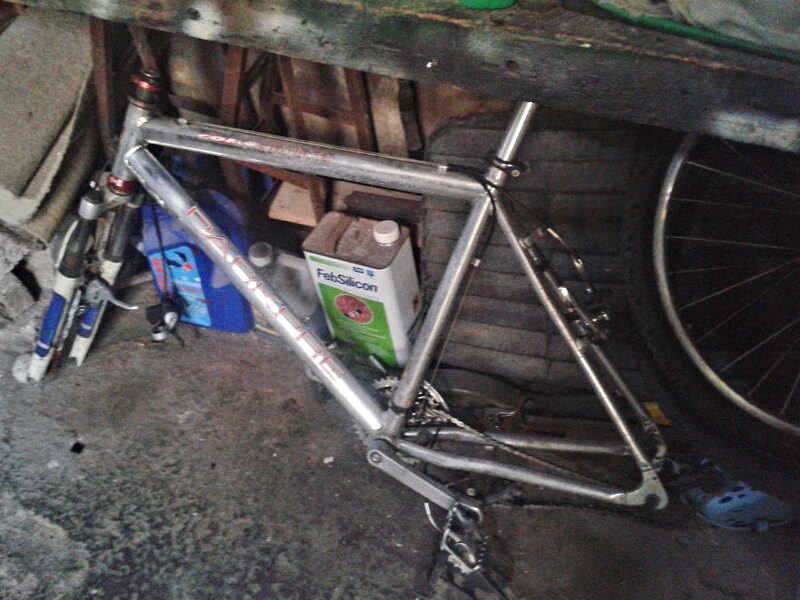 But after getting into retro bikes via here and a 97 Kona Kilauea I was quite taken by all the polished Zaskars so decided to rebuild the Malt.

First I stripped the lacquer clear coat by hand which took forever (never again) and lots of autosol. I'd sold the Kona sadly so bits went on the Merlin and it was running again as my commuter in Edinburgh. It was still super fast!

After alot of sanding and polishing it looked like this. The Manitous didnt last long and went rigid instead 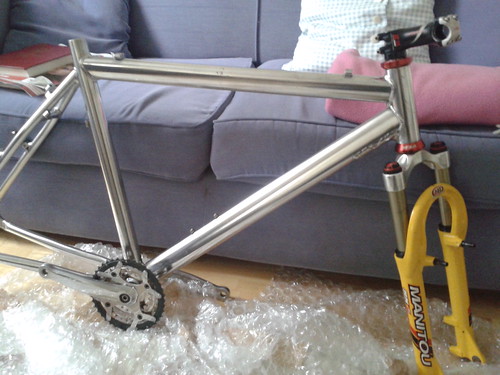 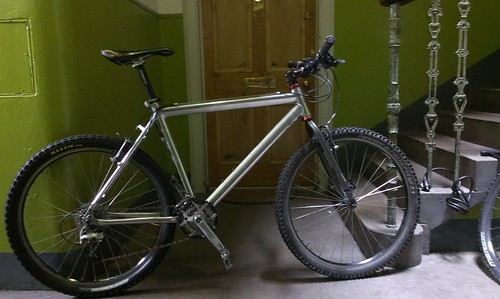 But my Kona itch needed scratching and a y2000 Pahoehoe arrived and has been my rat retro bike for a while now.

Having moved back to Hull from Edinburgh my modern steel hardtail built for Scottish riding was redundant. East Yorkshire is pretty flat except the Yorkshire Wolds. So I bought a gravel bike which is pretty good but you have to go easy on the downs which takes the fun out of it. I never really gelled with the Pahoehoe so back in May I wondered if I could buy the Merlin back off marshole82 from on here. His reply was 'I was just thinking today about selling it.' Meant to be or what?! It came back in pretty good condition but with more autosol it was back to a near mirror finish again. 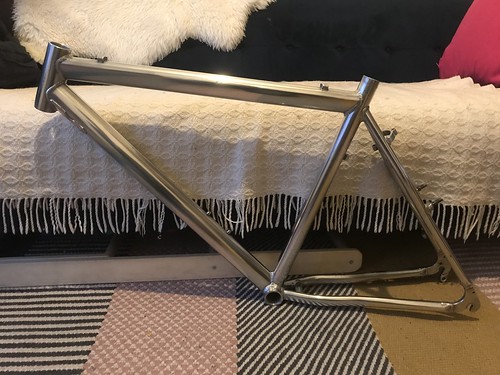 So, for build number 3 I wanted the Merlin to be a bit more capable than with Indy C's, Being a massive Marzocchi fan the hunt was on for something I had always wanted after seeing a pair on a Kona King Kahuna at Gregsons - those drilled crowns look awesome!. Despite ebay pandemic bike madness I found a pair...

Cosmetically they are like new. The steerer is unblemished and even the decals only have tiny nicks plus they were a bargain. Except a seal is leaking and the seller was not interested in sorting me with some new seals. Ah well, I'll sell my marathons and get the x-flys sorted.

As for the rest of the build I have some m750/760 derailleurs and shifters, LX/Mavic 217 wheels, the m569 LX cranks are going back on and my Avid Arch's will be reused even though they are getting pretty worn. Sadly my donor bike has had to live outside so parts have needed quite a bit of reconditioning. 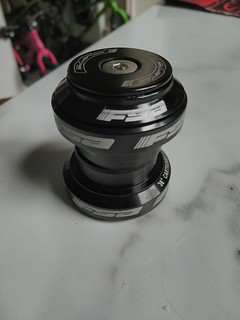 The brakes are mint SD7's. 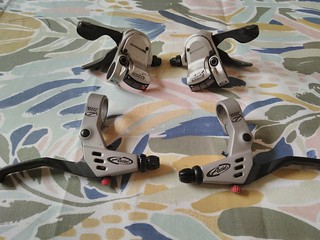 I'll probably get Gil to do me some Merlin decals too so it should look like this.

So that is it for now. I would love some first gen Mavic Crossmax wheels along with tanwall tyres plus I need to think on black finishing kit. I'm building it with bits I like so will see what turns up. The frame is having the headset and cranks fitted just now so more photos soon. The plan is to have it ready for a significant birthday in December (I'm twice the age of the frame!) and maybe a trip to Rivington Pike where I mostly rode this. That would be the perfect retro ride back in time.
Last edited: Nov 5, 2021
F

GT Fan
Lovely bikes. Had a malt around 97 myself as I was finishing school. Had GT’s and oranges prior to that but loved the way the malt rode.
Rivington is great, used to take my m-trax up there quite regularly about 10 years ago and loved it
N

Dont go back to rivvy though. Its not like it use to be.

What's happened to Rivi??? The Merlin bikes have a great reputation for riding far better than their price tag and better than some more esteemed brands. My Kona Pahoehoe is easton elite tubing and supersingly steel like in feel but the Merlin is way more fun and rides much better.
N

Last time i was up there (granted its a few years now) it was so busy woth families and dogs,i spent half my time waiting for space (was sat mornong so i did expect it). Used to be that once you got off the bridle way and headed away from the resi that you got a good ride.
Most likely a bad day, but it annoyed me enough to not bother again. Still better than a bike park though.

Bet its mobbed these days but hopefully not sanitised. I only ever went on evenings or early/late at weekends.

Did remind me though of when me and a mate worked for Bolton Council, when the 2002 Commonwealth Games were on and I was freelancing on photos for the MTB event. We got the route in advance from the organisers and recced it, me on the Merlin. Race day itself was great and my mate also used to house share at uni with xc rider Oli Beckinsale who was competing. After the race we sat with him having a beer while Liam Killeen who finished third popped over to chat. I'll have to post some photos at some point but good memories!

This week I've spent a bit of time looking at others builds on here and of course was inspired by some of the great looking bikes.

Tyres wise on the Merlin I planned to use some WTB Bronson's which are a lovely fun, drifty tyre. But they look out of place on the wheels

So I needed some tanwalls! I love the look of smoke/darts but lots of mixed reviews so these are on their way - Terraone T1's.

I was there for the commonwealth. I must have taken 3 rolls of film that day which was a lot for a skint stundent. Ill have a dig and see what i can find.

Great! Yeah film and processing wasnt cheap, mine was on expenses though! Post your photos though, mine are on negs so need scanning
Last edited: Oct 16, 2021

So headset fitted and bb swapped over. Adam at Giroscope Bikes who did the work asked what I had in mind for wheels. So told him my old mavic/shimanos but that I really wanted Mk1 Crossmax. Which led to jumping in the car following him home to check out some pretty mint first gen crossmax wheels!