I am posting to see if anyone can help me identify if the Raleigh road bike we found in my father in law's shed. On the surface it appears to be a completely untouched 1987 Raleigh road bike. My father in law says that he bought it 10-15 years ago, but that only takes us back to 2006 at the earliest. He told us it has never really been ridden. I have done some research on serial number (WB700966) on the frame and it it would indicate it was made in Worksop in Feb 1987. I don't suspect its a 77 as some of the parts seem to modern.

My main inquiry about it if it is a complete bike from 1987? Its in remarkably good condition and I am just wondering if someone had perhaps updated everything or maybe just the frame was sitting about until 15 years ago. This would explain why it's in such good condition.

Any thoughts about the components or if this is actually a completely untouched bike from the 80s would be greatly appreciated. 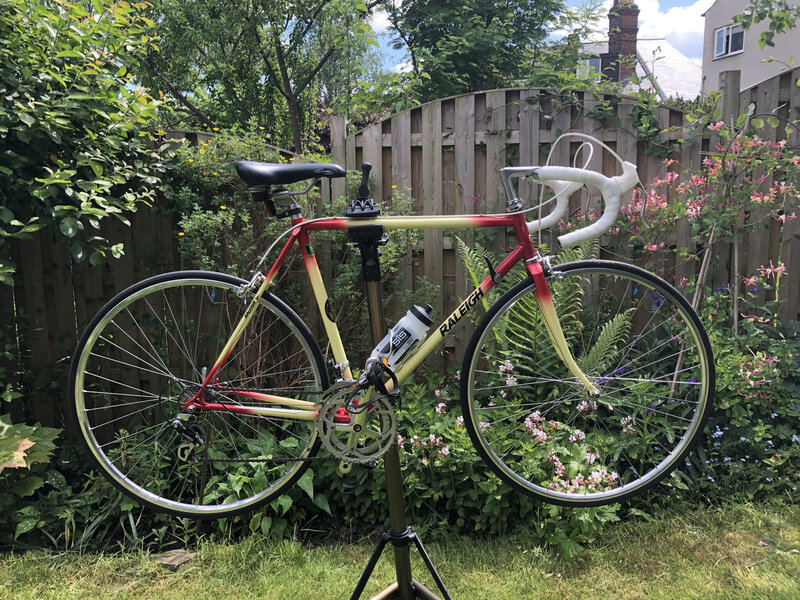 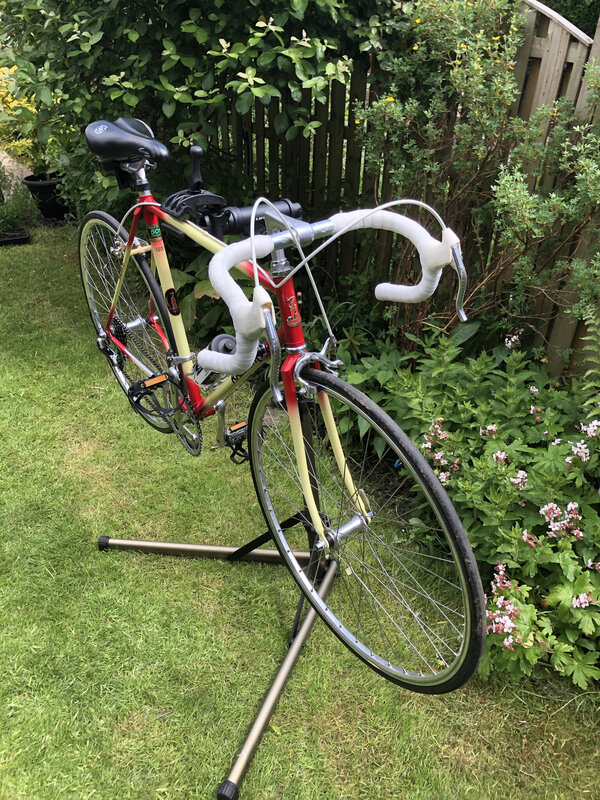 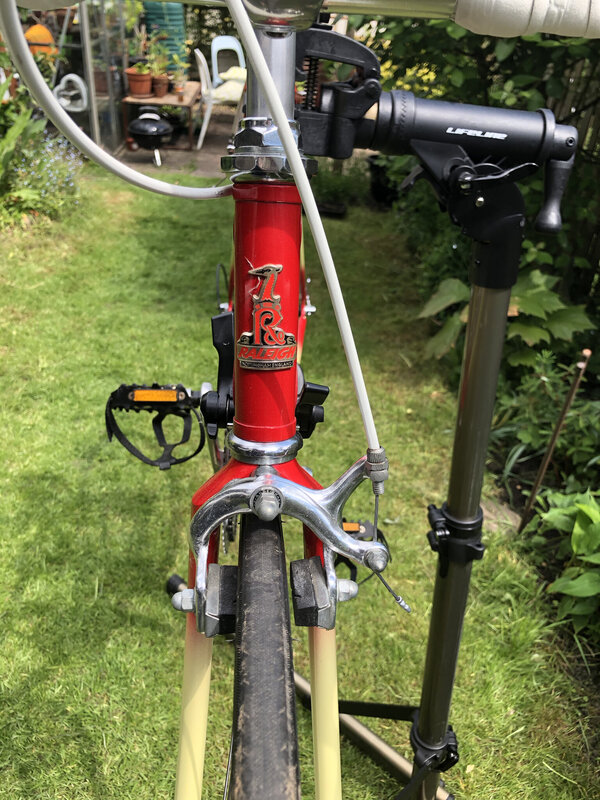 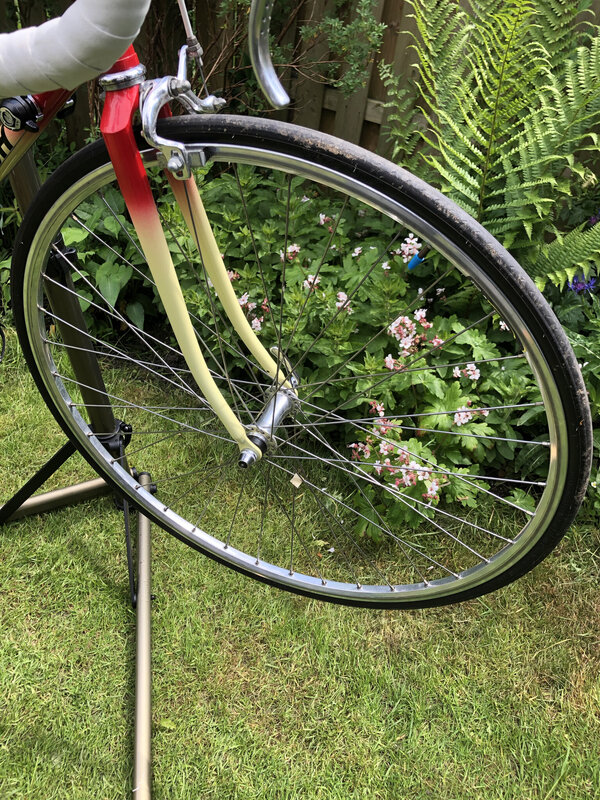 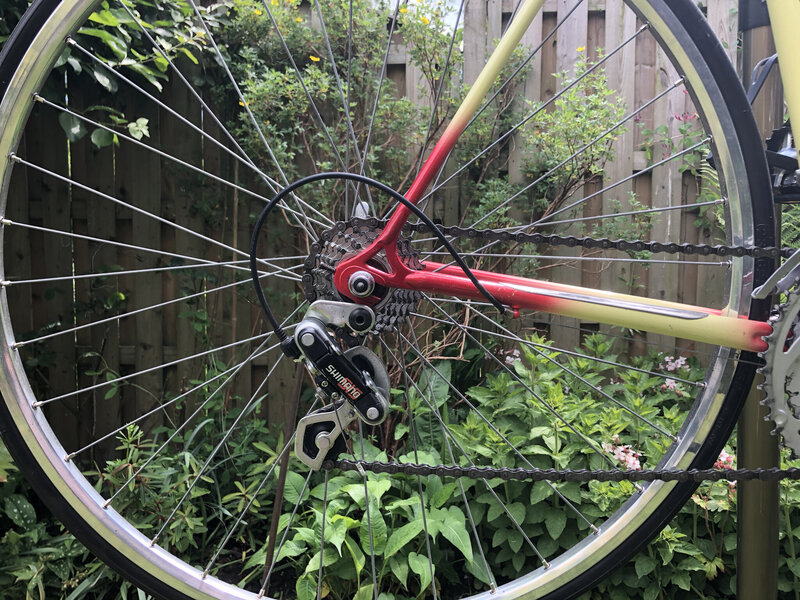 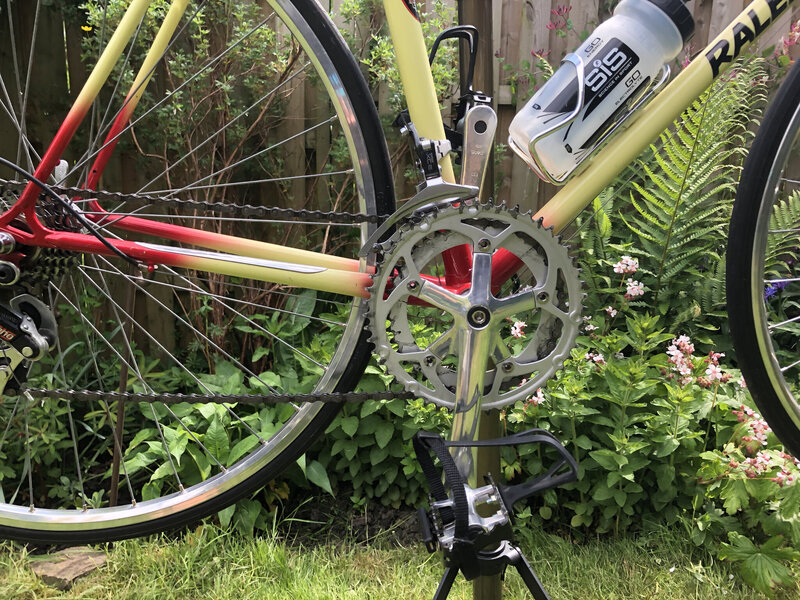 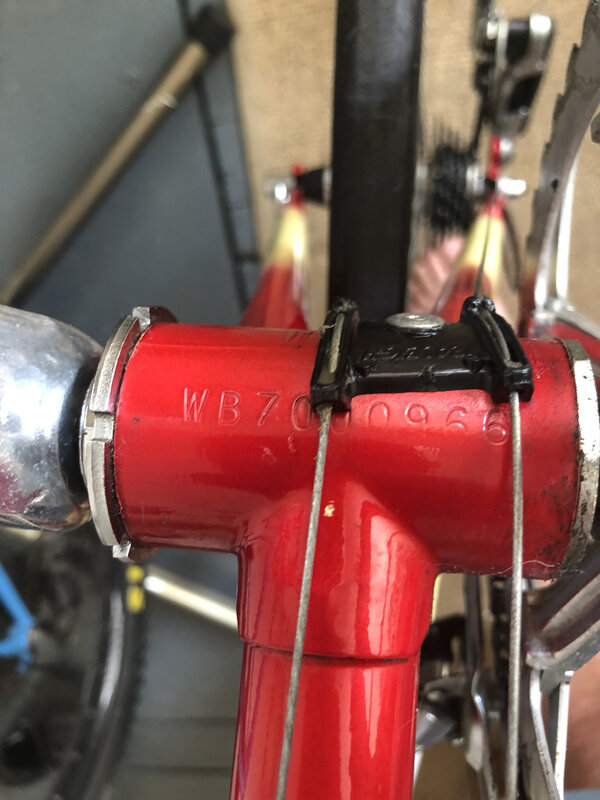 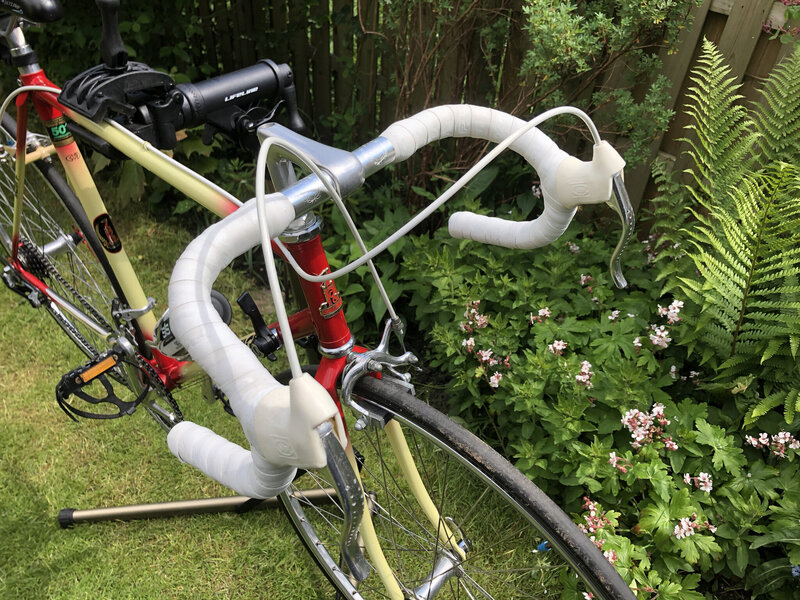 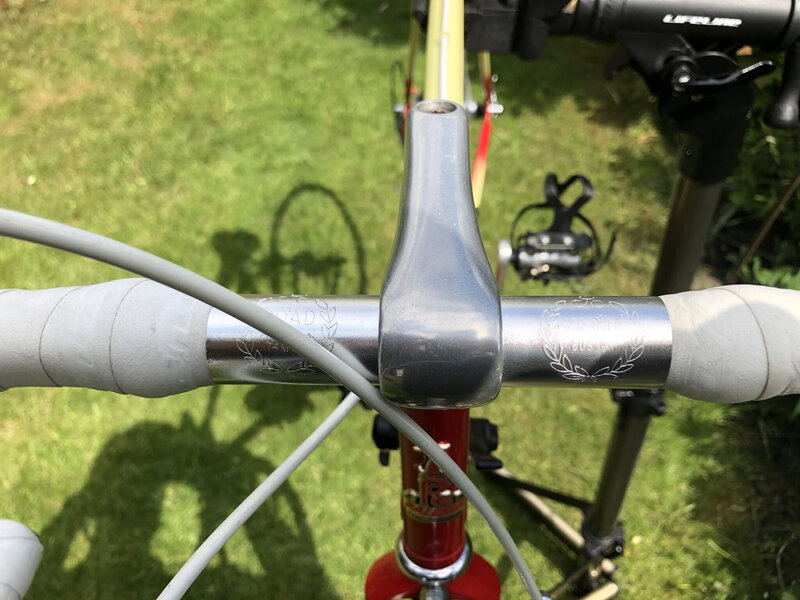 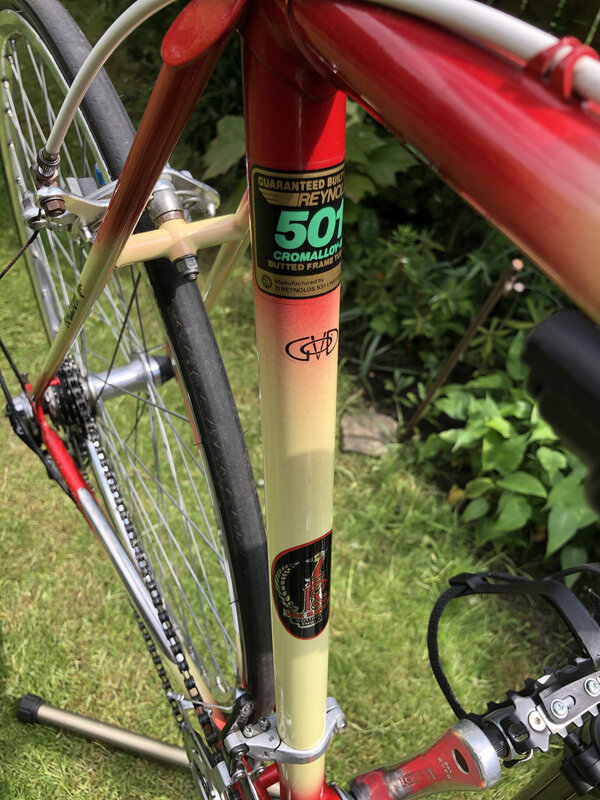 That's a GVD (or that was what we used to call them), the sticker is actually for Gerald O'Donovan - but the W on the frame number (and the 501 tubing) suggests that it's from quantity lightweight production rather than the SBDU. They were available as frame and forks, don't think they were supplied as full bikes although I suspect the same frames were appeared in different colours on full bikes. As for the kit on it, most is reasonable but I'd be wary of the front brake caliper (can't see the rear one) as it looks very much like one of the many knock-off versions of Weinmann side pulls that were available and maybe made from a very soft alloy. Again it's difficult to tell, but it looks to me that the rear wheel quick release hasn't been fitted properly.
Oh, and the adjuster screws for the rear dropouts may have been fitted from the outside - something that triggers my OCD.
Last edited: Jun 14, 2021

The frameset is a Raleigh lightweight division 501 race type 8805, built in Nottingham (Worksop stopped building in 1980) February 1987, it looks to be in very nice condition for its age. Looking at the bike it looks like someone has taken the parts from a cheaper bike and transfered them to this frame, maybe upgraded the chainset and front derailleur.

I like the paint, very rhubarb and custard
E

Thanks for all your replies (Jim, Kermit, mk one) this was very helpful. Makes sense that this might have been a new old stock frame that some one put a bunch of components on sold to my father in law and then was left in a shed for 15 years.

I did manage to catch the quick release being installed improperly just after taking the photos. I didn't catch the adjuster screws though. Ive attached photos of the brake callipers to see if you can offer any more insight.

Thanks again, and I'll probably be posting it up for sale here in a few days. 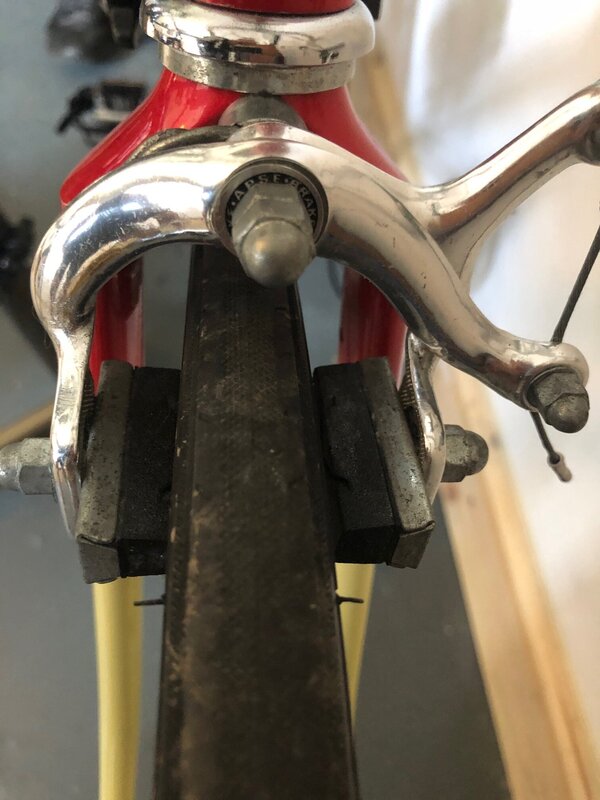 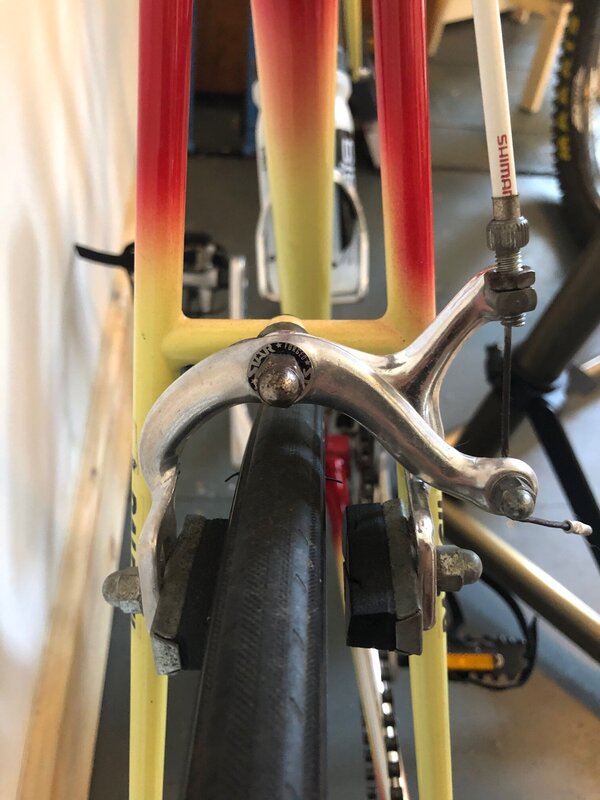 A quick Google suggests they’re Chang Star brakes, budget copies of Dia Compe from the 80s, and not very good copies at that.
E

Thanks for that Rob, seems to confirm what was said above about them being not very good.
R

It might help, it might not, but the Suntour mech will have a date code on it. XCE is about 1987, maybe a touch later IIRC.
E

Rod_Saetan said:
It might help, it might not, but the Suntour mech will have a date code on it. XCE is about 1987, maybe a touch later IIRC.
Click to expand...

Thanks Rod Ill have a look and see if I can find the date code.

Rod_Saetan said:
It might help, it might not, but the Suntour mech will have a date code on it. XCE is about 1987, maybe a touch later IIRC.
Click to expand...

The Reynolds sticker is from 1989 or earlier, which matches with what you are saying (though some companies used up old stocks after this).

The frame deserves better components - a Shimano RX100 group would go nicely.
You must log in or register to reply here.

L
Any clues about this old Rudge of ours?

What can you tell me about this old Raleigh?