10 reasons why you should consider going to Mountain Mayhem 2019 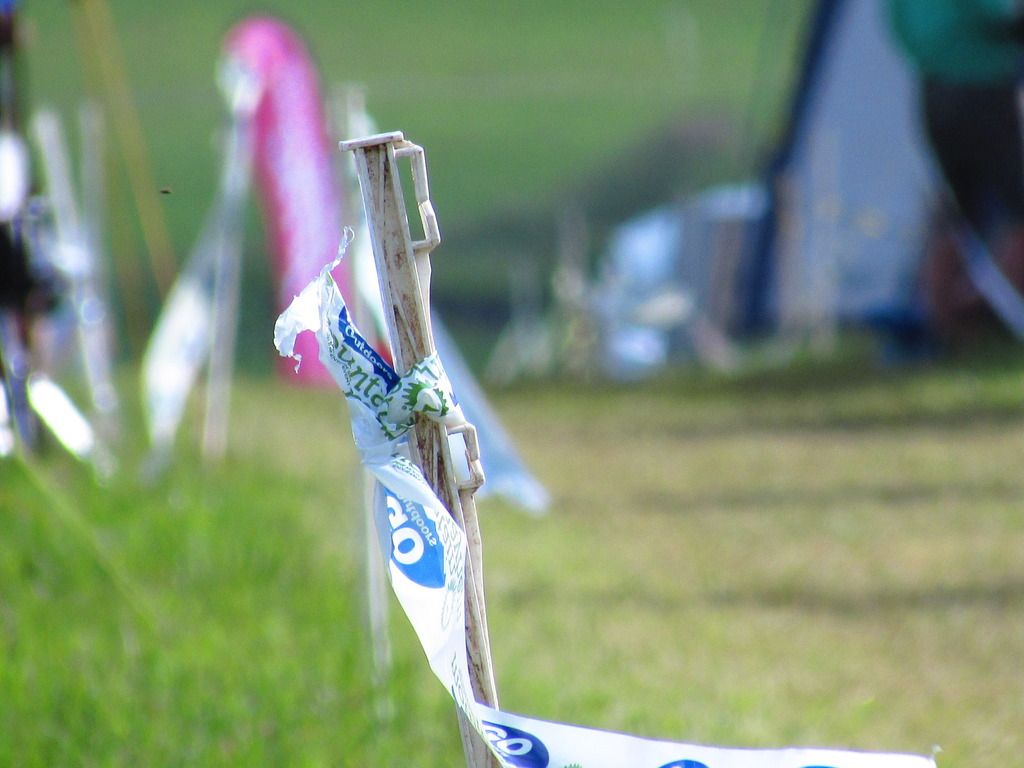 What actually is Mountain Mayhem
Strip it bear and it’s a 24hr Mountain Bike race however is far more than that, it’s a Mountain Bike Festival starting on the Friday when the gates open and running through to Midday Sunday when the track closes, and in between it’s a massive tribal gathering of thousands of likeminded folk.
The notion of racing for 24 hour MTB race is not a new one, it was the Americans who got the ball rolling in the early 90’s when the sport was still in its infancy, Mountain Mayhem followed in 1998 when Pat Adams organised the first British 24hr MTB race but added a twist, a “Le Mans” running start; over the years its grown up and had a number of different homes and after a year off its now back for 2019 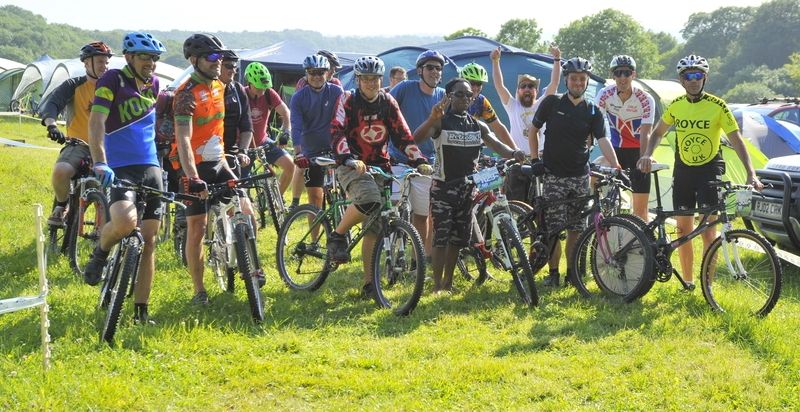 Year on year Mountain Mayhem attracts thousands of entries and remains the biggest MTB event in the UK and probably the biggest 24hr race in the World. For us here at Retro Bike the term “Racing” is used “loosely” of course there are a few who take it seriously and have entered in teams accordingly however the overriding consensus of those going is fun and the social aspect which is a lot higher up their list than lycra and energy bars.

Where is it held

Brand new location for 2019 is the magnificent Marston Lodge in rural Northamptonshire. Marston Lodge is a privately owned 700 acre arable and livestock farm with 100 acres of woodland, uniquely with very significant historic importance in British history extending back hundreds of years. Original fortifications were built by Celtic tribes, more recently Marston Lodge was at the centre of the decisive and most fierce battle of the English Civil War, the Battle of Naseby, was fought on Marston Lodge land. It is here that the Cavaliers finally lost the Battle to the Roundheads.

Marston Lodge is located in the East Midlands just off Jnc 20 of the M1 – and halfway between the Northampton in the south and Leicester to the North, with easy access to the M6 making it well connected to all major routes including the M5 and M40 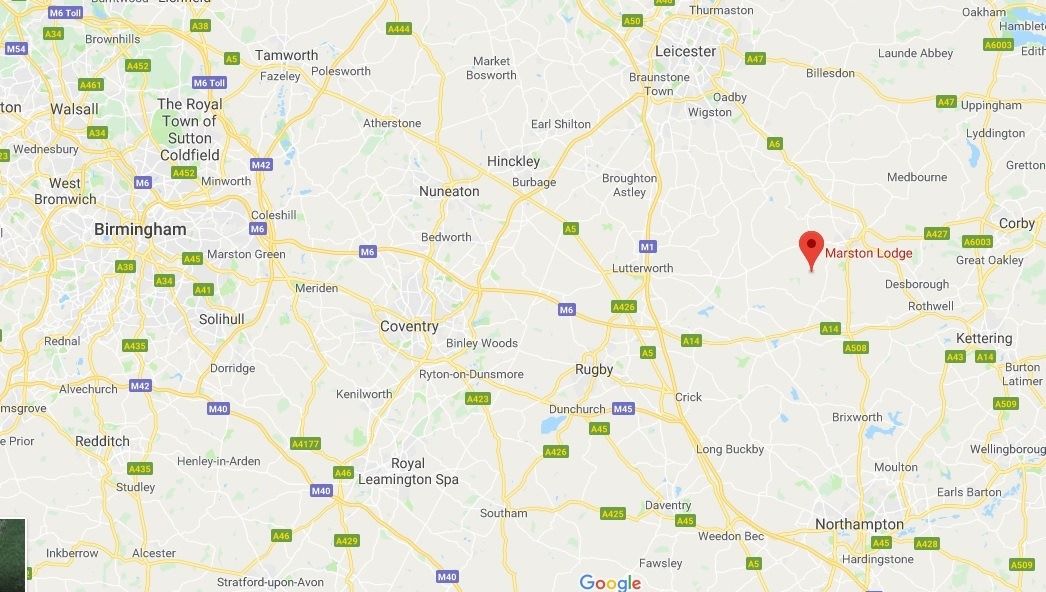 It’s normally on or as close to the summer solstice as possible not particularly friendly for druids but with maximum daylight hours its great for a 24hr race, and also offers a good chance of dry weather. For 2019 the gates open on Friday morning - June 21st with racing starting at 12 noon on Saturday the 22nd and finishing at noon on Sunday the 23rd June.

How much does it cost
Your entry fee is based upon how many there are in the team, solo being the most expensive and a ten man team being the cheapest (Pro Rata), it could be as little as £50 for a whole weekend. Your race entry fee also covers your camping costs even if you bring the kids and a six birth caravan you’re covered. Naturally all amenities you’d expect are also included such as “Free” Hot showers, Plenty of fresh running water, Ample Toilets, Bike Wash, and a whole village area catering for your every whim, not to mention the numerous Trade Stands for you to peruse 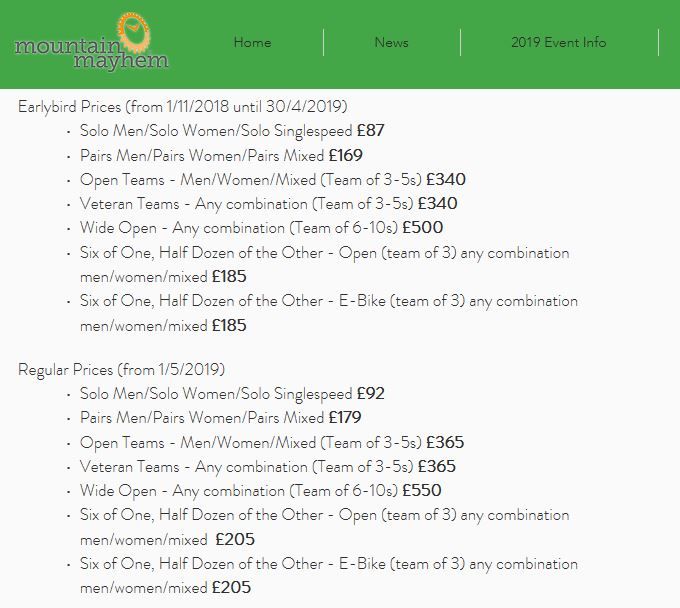 The cheapest entry fee is for a single person in a ten man team which works out at £50.00 plus a £2 booking fee.

I don’t really know anyone
So you regularly post and exchange comments with tons of folk online at Retro Bike, but you don’t actually know anyone? ……does this sound familiar and been putting you off taking the plunge? Well I was that person not so long ago, my one big regret these days is having not taken the leap of faith a lot sooner, you won’t meet as many likeminded people in one place, wall to wall Retro all camped together in our own Retro Area united by our love of “antique bikes”
Many Retro riders arrive on Friday in order to take a leisurely ride of the track and of course partake of the Retro Bike pre-Race BBQ which allows everyone to meet up, enjoy as few tunes from the 90’s and of course sink a couple of beers accompanied by lashings of Bullshit and tall tales usually starting with “back in the day when I …” or catching up on, or discussing builds that you’ve seen unfold via the forum etc, with the race not starting until noon on Saturday a lazy morning is usually the order of the day. 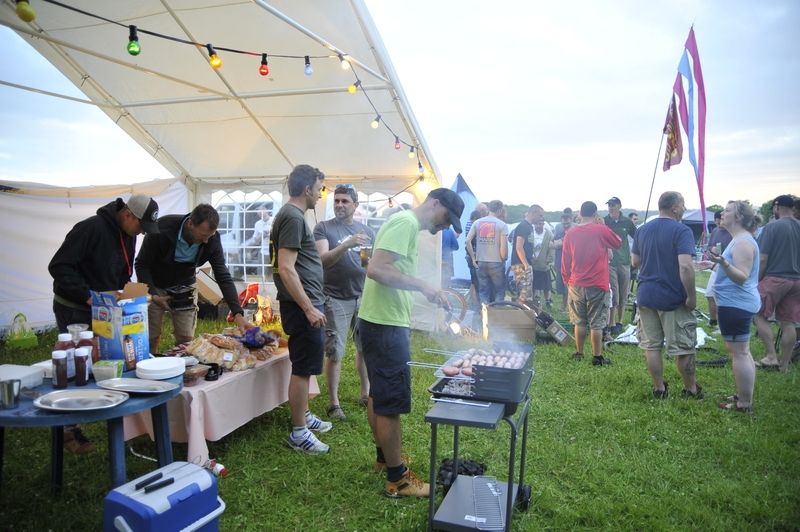 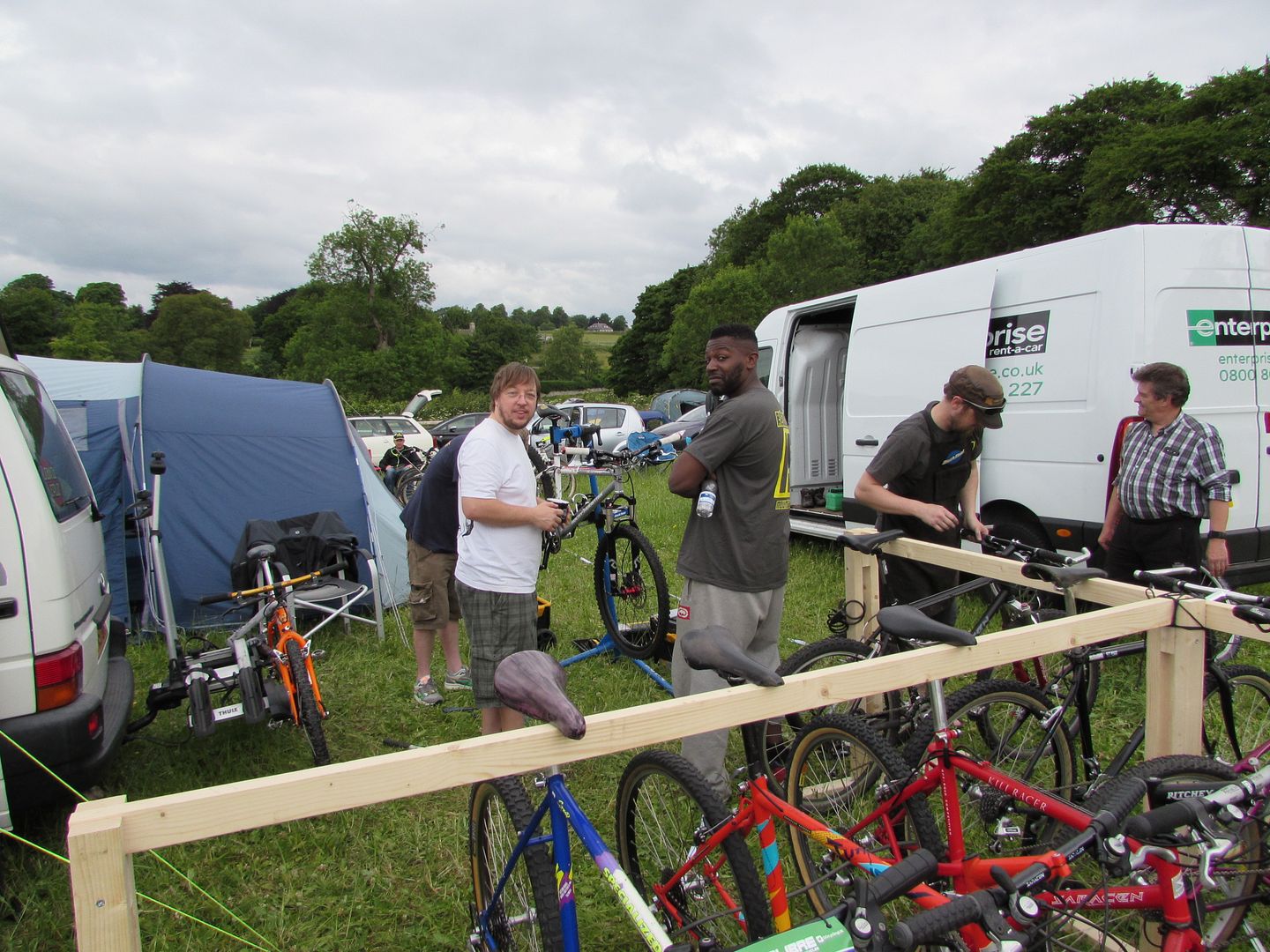 Some folk hanker after the smell of Napalm first thing in the morning others go for lighting a BBQ with GT80 (because it smells nice) which to be honest isn’t to be recommended even if you have “Upmarket” Jack Daniels BBQ chip made from Old Whisky Barrels to take the taste of petrochemicals away. The flames are quiet impressive thought ! 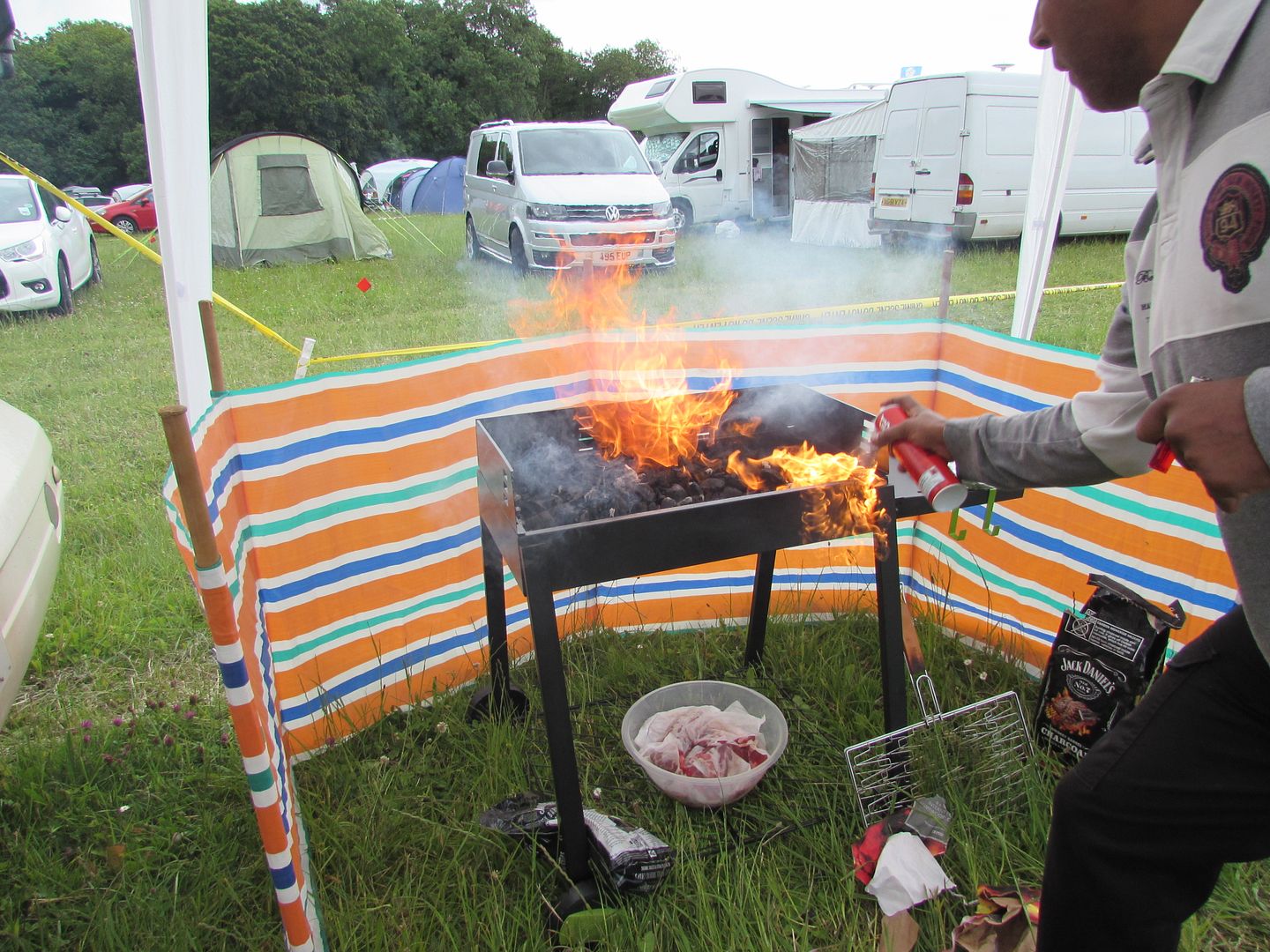 The Banter
Some people come to race, some come to be part of a team others come just for the Banter! Thanks to the organisers track routing has traditionally run through the camping area on the last leg to the finishing , it naturally follows that the Retro clan can’t resist laying claim to a section of prime time track side real estate in order to enter into enthusiastic but little light hearted heckling all from the comfort of the beer tent or a comfy trackside deck chair, no one is spared, from the great and good uber fit racing whippets, to those reducing to walking back with a broken chain there is no escape from the now famous Retro Heckle area which has grown its our unique identity and becoming a regular fixture over the years.
In essence it just a bunch of guys who should know better goofing off with a mega phone and escaping the realities of modern life for a weekend, with of coarse a bit of racing thrown in for good measure. 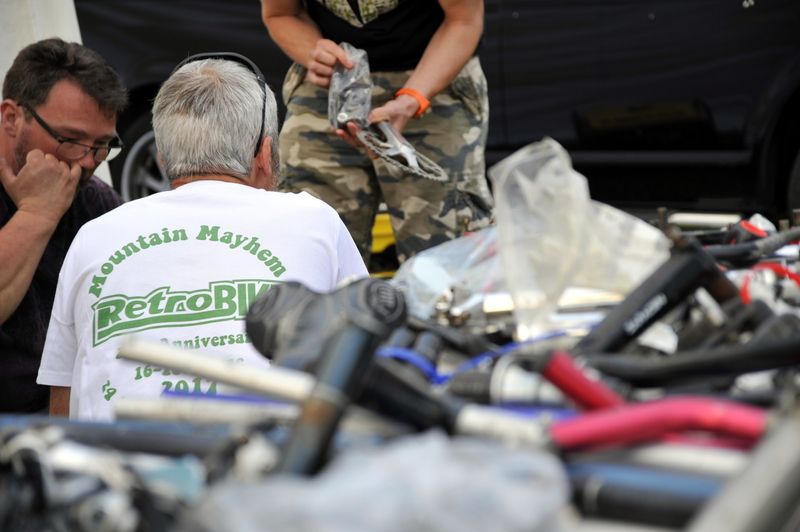 What more can you ask for, even the Mags are positively vintage let alone the booze 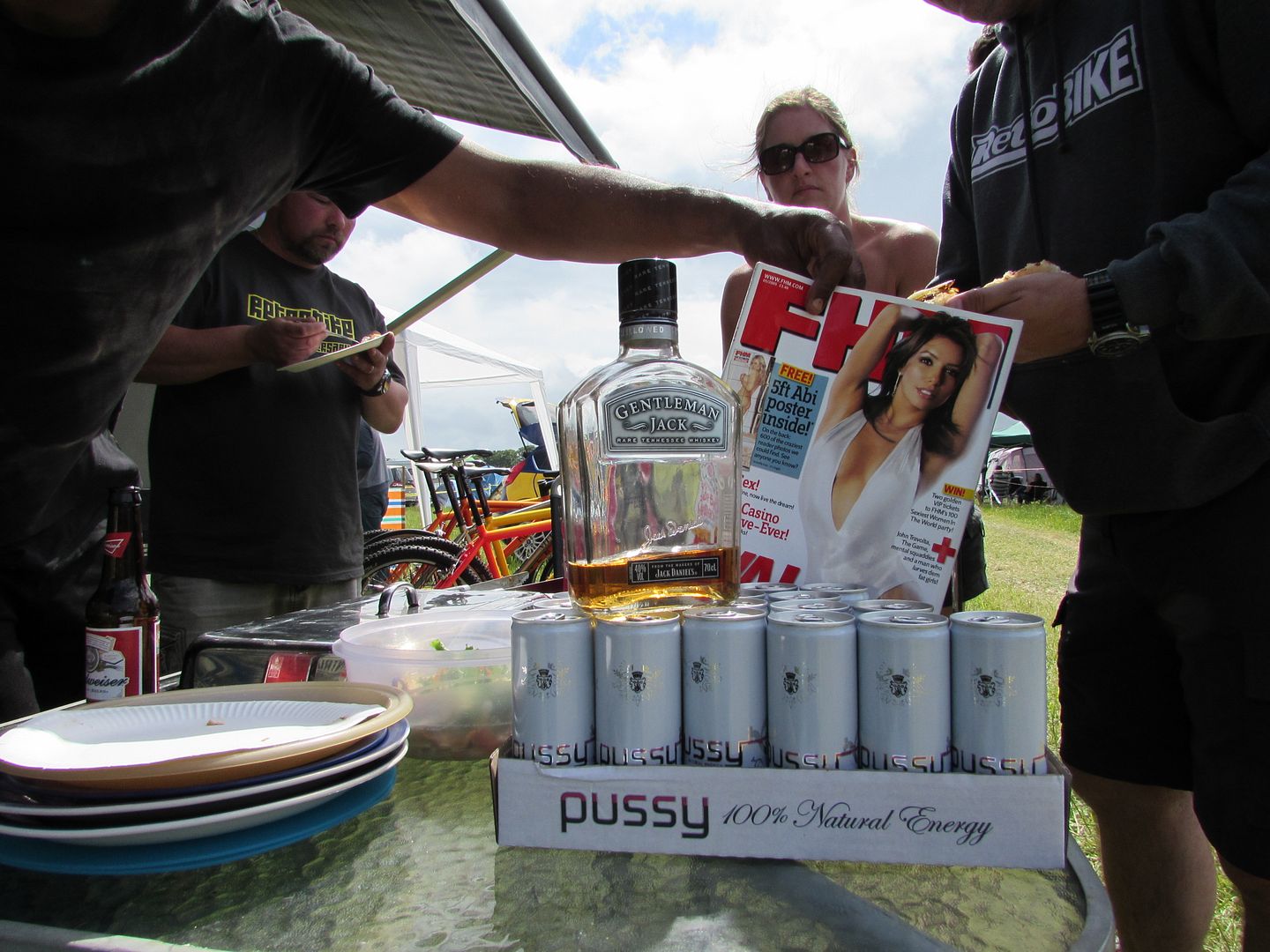 When you turn up just for the banter you can party until the wee hours even on race day! That Gentleman Jack was obviously in full effect. 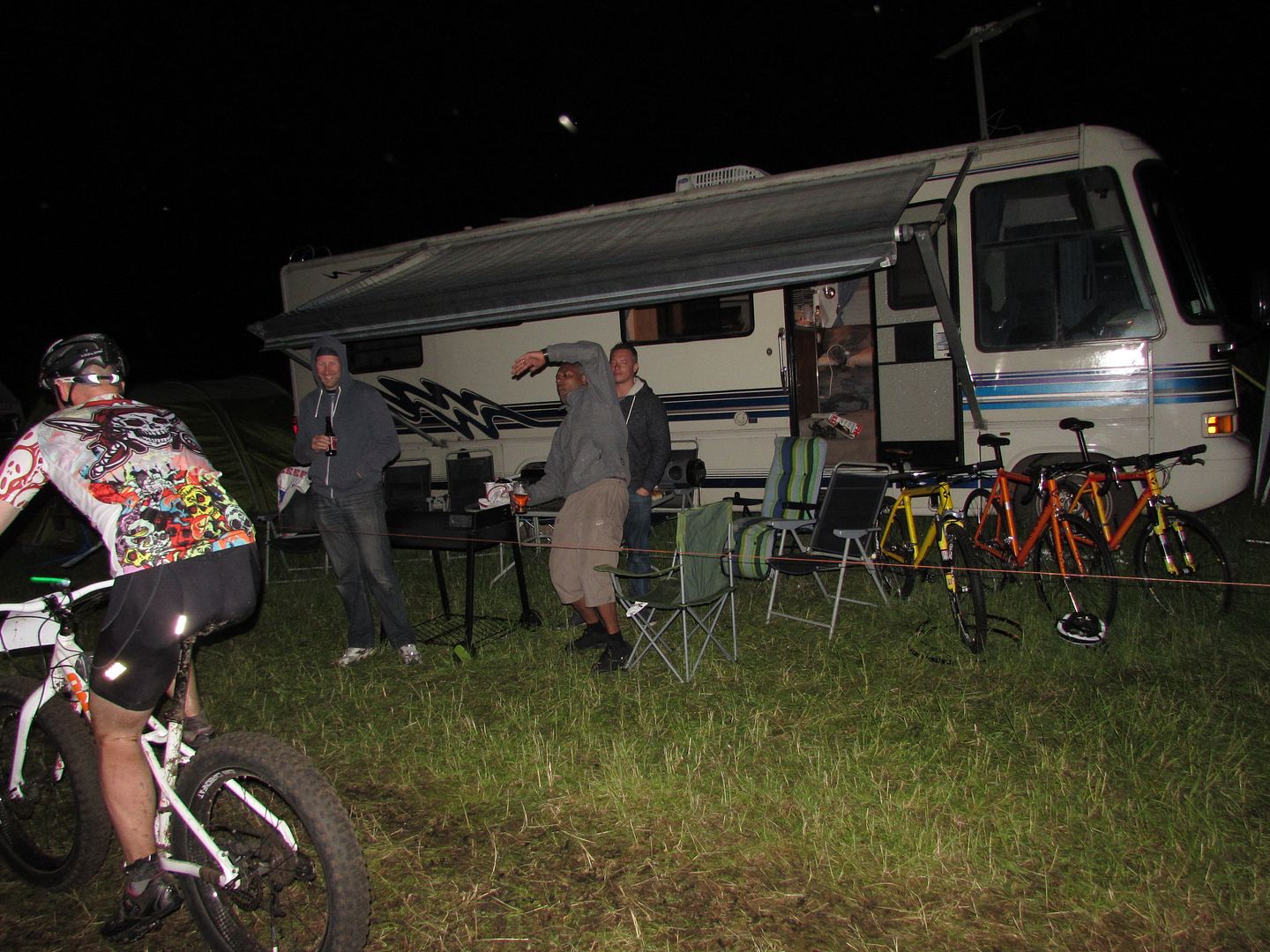 and even during the day some like to take it easy 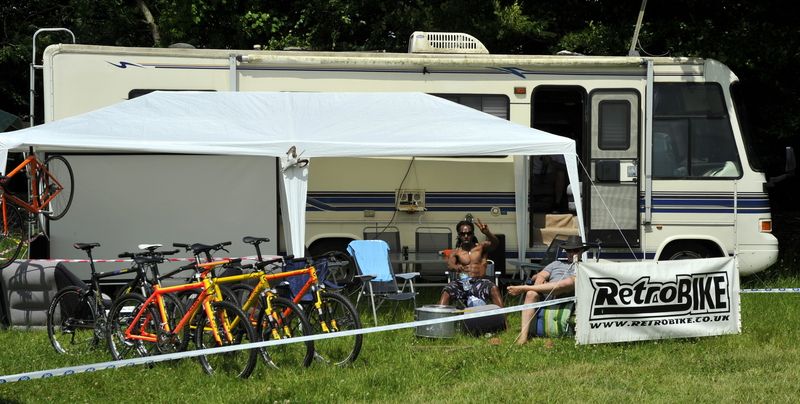 Racing
Its been years since I last entered raced, and I’m not the racing snake I used to be, and I don’t want to let anyone down.
As far as I’m aware nobody on a Retro rig has ever gotten within a million miles of the podium let alone actually set out with the slightest intention or ambition of winning anything, sure some solo’s or four man teams are made of some very fit and keen riders who are competitive, however most ten man teams are there just for the enjoyment and a few laps dispersed across the 24hrs.
The Facts: (using previous events as a guide)
• Riders aim to complete as many laps as possible within 24hrs, fastest teams will be around 40 laps, solo between 30 and 35 laps.
• Distance: one lap is approx. 12km (7.5 miles)
• Ascent (m): 320m (when hosted at Gatcombe Park)
• Estimate Fastest time: 35min
• Typical/average time: 50min
Okay so you’re unlikely to be turning up on a mega buck carbon fibre 29’er having completed months of training at altitude, you’ve come to have fun! so forget the times above, last year the typical person in two out of the three Retro 10 man teams averaged 55 mins, and over 24hrs achieved a combined lap count of 25 laps, or 2 laps per person with the odd member getting to do a third one. If you want more excitement or commitment then a four or a five man team should be considered.

Martin (AKA Harrycrumb) readying the Clockwork for battle 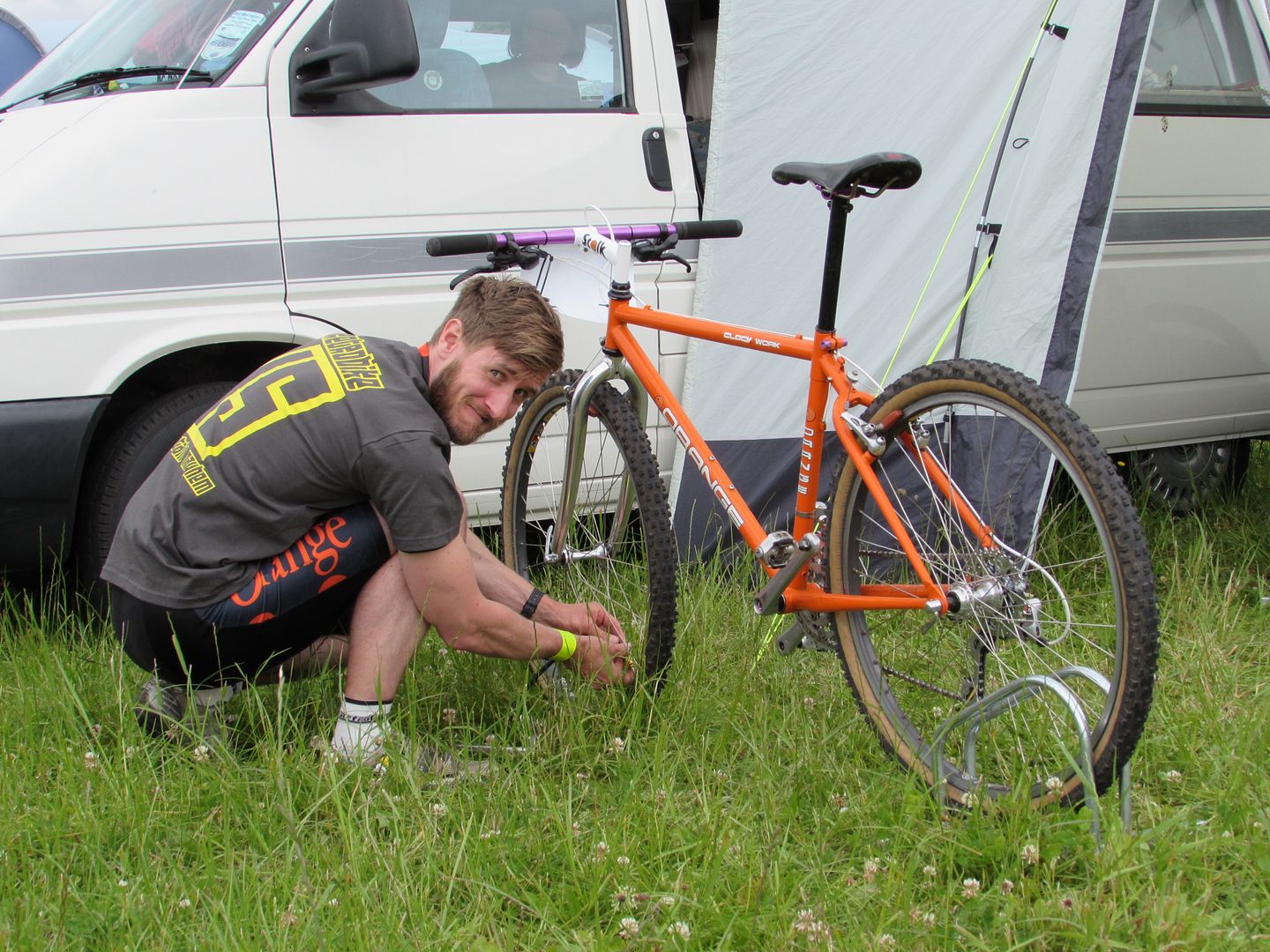 Do I need lights
If you have them great, if not don’t worry there are usually more people after a night ride than there hours of darkness to accommodate them. It is after all so close to the summer solstice that darkness is in short supply -

although this is from a few years back the day light hours are almost the same.

Can I bring a modern ride as well
Many bring both, from Phat bikes to 29er and even single speed. The emphasis is on having fun but be prepared for a little ribbing if you do rock up on a spanking new modern rig and pretend you’re down with the kidz ! 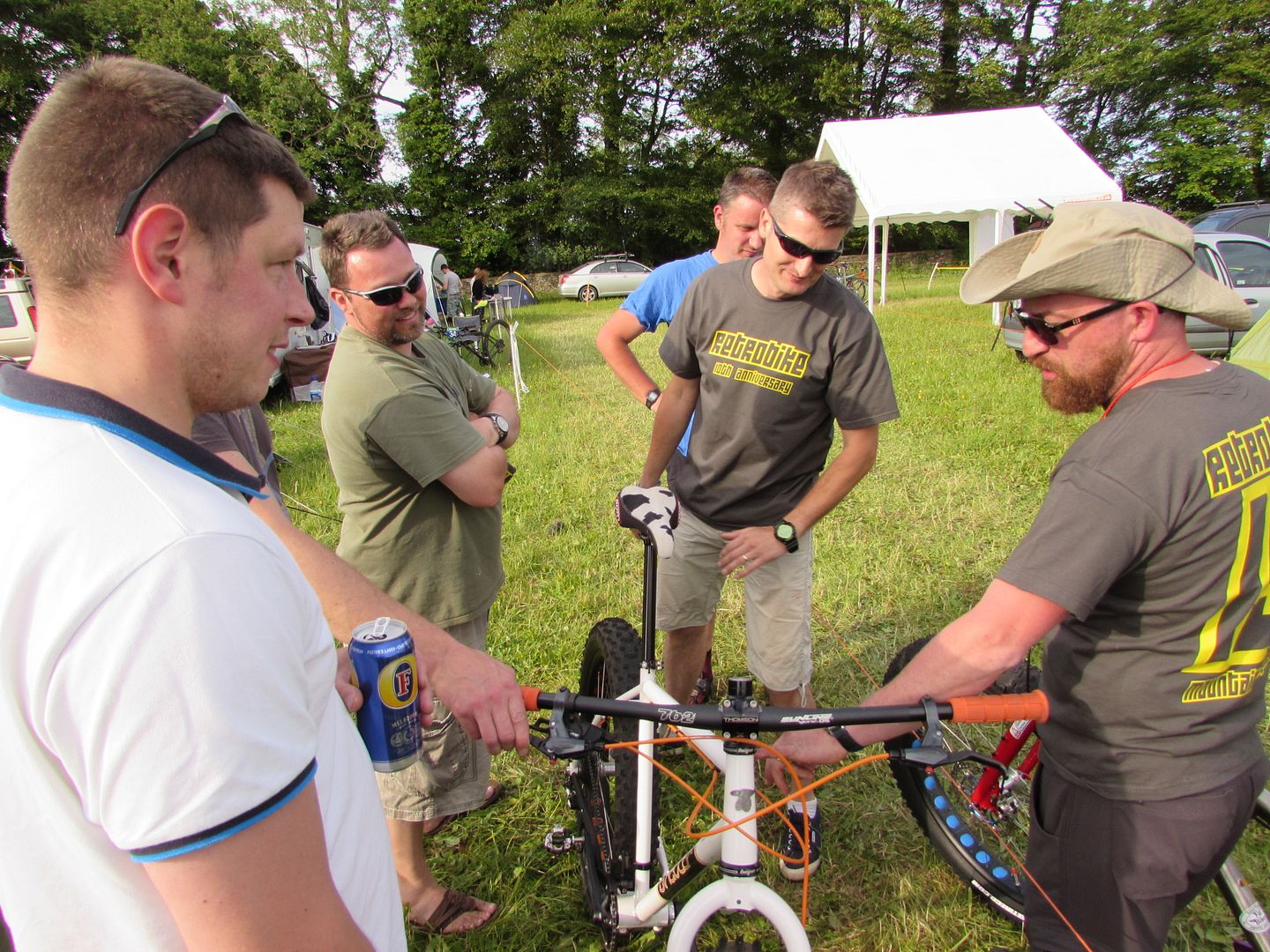 How do I enter
We’re already up and running and a lot of folk are already committed to going, however unless you’re going to fly solo, you’ll need to be part of team and I want to fill another ten man before June. Places are limited to 1,850 however it soon fills up and is often oversubscribed in most categories, so it pays not to hang around, If you want to take part follow the link viewtopic.php?f=5&t=385715

Don’t wait and put it on your bucket list for when your too dam old to enter,
Instead get a gate pass of the wife, book Friday off work and come along,
What’s the worst that can happen

smh. Too close together, no masks in sight ...