I had a lovely GT Xizang some 12 years ago (http://www.retrobike.co.uk/forum/viewto ... mp;t=35960) but then came a moment that the Mrs. demanded that I must thin my retro bike herd and Xizang was one of those which got under the chopping block.

Selling that one was something that bugged me quite a bit. Then one of my local bike collector friends got himself a nice '95 Zaskar LE and it initiated my interest in GTs again. So I bought me a pristine condition '96 Zaskar LE set from here and planned on building that into a factory-spec bike. However, I had a feeling that the Zaskar is "just" a place holder for greater things. Then, last summer, I noticed a British guy mentioning on GT forum on Facebook that his Xizang is a tad too large for him so I contacted him and we settled up a deal on the frame... So I was again an owner of a Xizang (yay!), this time a 1996 model.

So the Zaskar got to go and I started to ponder on possible builds for the titanium wonder...

As I had the full XTR M950 set that was meant for the Zaskar, it was an obvious choice. I also had three different forks available: a rigid GT Bologna Lite, a 1996 Judy SL and a 1997 Judy SL. My initial thought was to put in the '96 model but even though it is otherwise in a superb condition, its cartridge is shot (some idiot had changed a plastic '95 cartridge there and it doesn't have any oil inside). So at least for now, I've got a Bologna fork there.

I also got me Kore Elite stem, Azonic bar, San Marco/Bontrager saddle etc. like they had in the race team bikes. But got me also slim Control Tech stem + Easton carbon bar & post. So there are decisions needed...

Here I have GT/Hadley wheelset as the XTR wheelset hasn't been built yet.
D

Lovely build this is going to be. For me though it needs either Judy SL or SIDs.
P

Very nice as above sl or sids would look great on it.
4

In my opinion it’s got to be built with those Judy’s, just looks and sits right.

Going to be a mega build.

Thanks for the comments guys!
Definitely no SIDs, they're too new so it's Judy then. Just got SRP Speed Springs for the '96 model so I need to see what I can do to it. Just don't know how it'd work / sit with an empty cartridge. Irritatingly I have a newer aluminum cartridge but it doesn't fit the '96 model

Besides Dart II / Smoke II combo pictured, I've got also green Michelin semislick tyres to go with the XTR wheels to have that race look of Team GT.
D

If was building it that’s exactly how I would do it. Yellow and green looks great against the Ti.

This is my Lightning 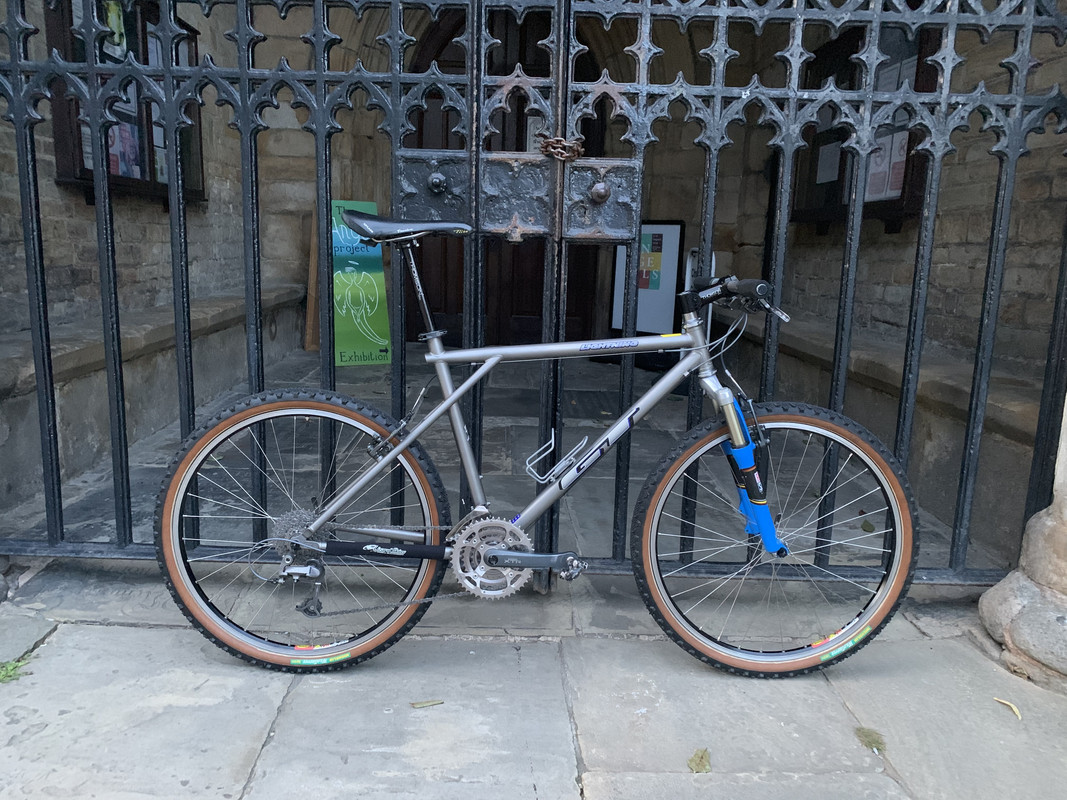 That's a sweet build as well!

I rebuilt a '96 Judy SL with a NOS cartridge & SRP SpeedSprings & new seals. I was positively surprised that stanchion tubes were flawless which is very seldom the case with old Judies. Even though the '97 SL has good looks with black & red decals to fit frame's decals, I still think that the '96 fits the best with the frame as both are of same vintage.
I also decided to emulate the Team GT setup with a Kore Elite stem and Azonic O'Neal handlebar.

And here with XTR M950 wheelset that I got built with DT Revolutions and Mavic 217 Ceramic rims. And Michelin Wildgripper Sprint semislicks.
Also with onZa Ules grips and ProCut barends installed. However, I've since gotten yellow CWAs which will replace the ProCuts in the build.

As I'm not particularly fond with the looks of San Marco saddle, I've bought a half yellow-half black Flite that I need to test for the looks.

Classic build, recall the GT / Hadley hubs were really quite nice.
You must log in or register to reply here.

T
Building a xizang - what forks?