Once again, I found a bike that was just too intriguing to resist. Opening bid on Ebay and I now have another mystery bike.

It arrived today (well worth paying DPD an extra £5 to have it delivered within a 1 hour window on a Sunday morning) so here's a picture straight out the wrapping: 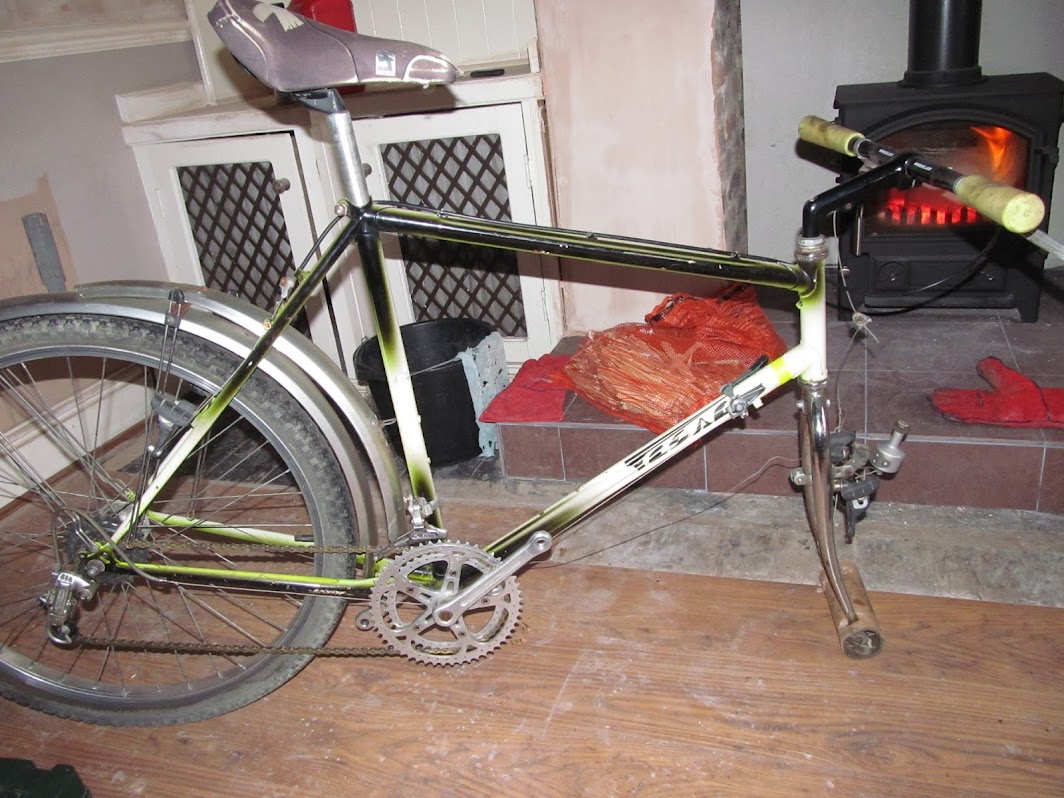 It was the fluted top tube and down tube that really sucked me in. I know Tesag are just the company who repainted it (Swiss?) so any suggestions who it is built by? Is it a road manufacturer's attempt at an ATB? Or is there a company who used this style of fluted tubing for mountain bikes?

I'll add further pictures and details when I get time, though there are currently better quality pictures from the seller (banned user on here I think) here:

Nice fluted tubing. Downtube shifters? Maybe a tourer?
Does have that ring of "road bike company makes mtb" about it as you say.
L

Clearly the mechs and chainset (late 70's) are far older than the frame so don't let those distract you.

That seat cluster is found on pretty decent road bikes from around 86/87 ish and those bars were also used on Muddy Fox of the same era so Wheeler could actually be the frames brand. The stems can still be found on ebay as NOS

And your frame has a quality BB in it.

Thanks for the info LGF, that's great

I'll take a picture of the seat clamp and check the bottom bracket as soon as I get the chance.

I love the stem, that will definitely be staying whatever I do with it. The seatpost is really short - in that picture it is precariously perched just in the top of the seat tube. It struck me this morning, after I got to work, that the last bike I had with such a short seatpost was due to broken off seatpost being present further down the seat tube, so that's the first thing I'll check tonight.

Oh I hope not.. That's what was on my kili and you dont want to use caustic soda on your paint!

Fortunately not! Not sign of any stuck seatpost, at least as far down as I could reach.

It was a bit dark to take a close-up of the seat cluster, but I'll try today.

I initially thought it would need a repaint, but the paint's not in as bad condition as I thought, so it might be alright to stay as it is. Which would be good, as I have several frames that have been waiting to be repainted/powdercoated for quite some time.

Been a bit busy, but here's a shot of the seat cluster: 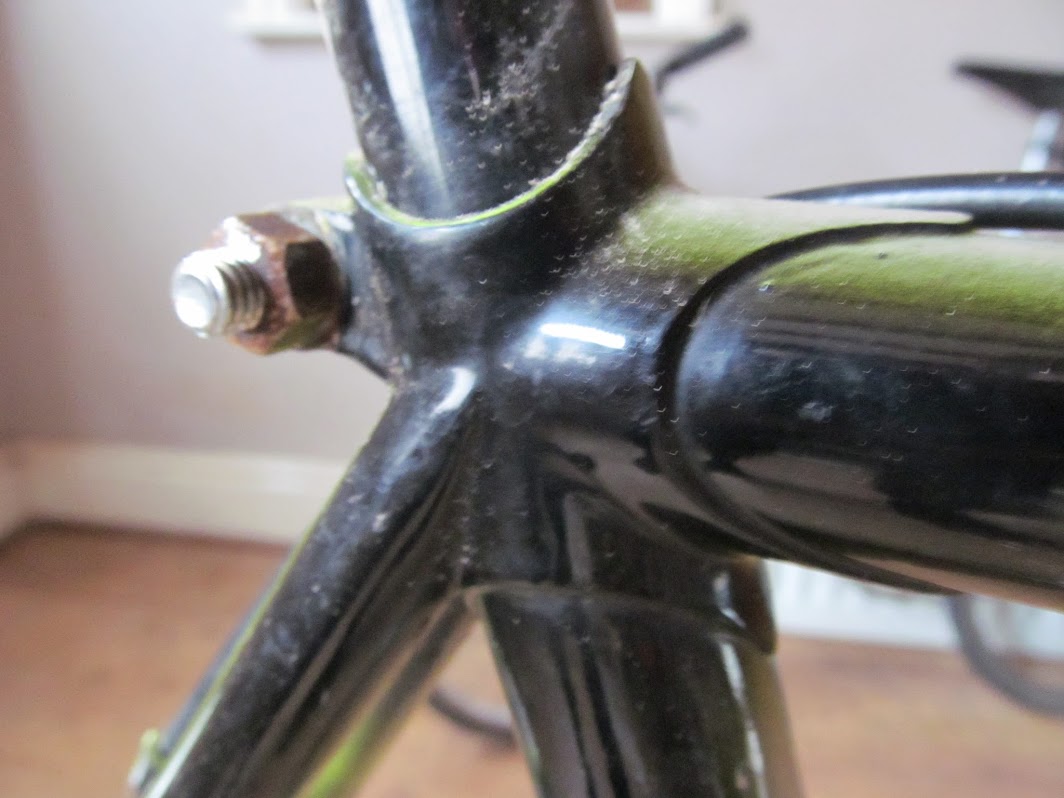 The seat post that came with it had been shortened so much because it was too large a diameter. I think it takes a 26.6mm post.

I decided to thrown on a front wheel, connect the brakes and check I could get all the gears on the rear mech then take it out for a test ride: 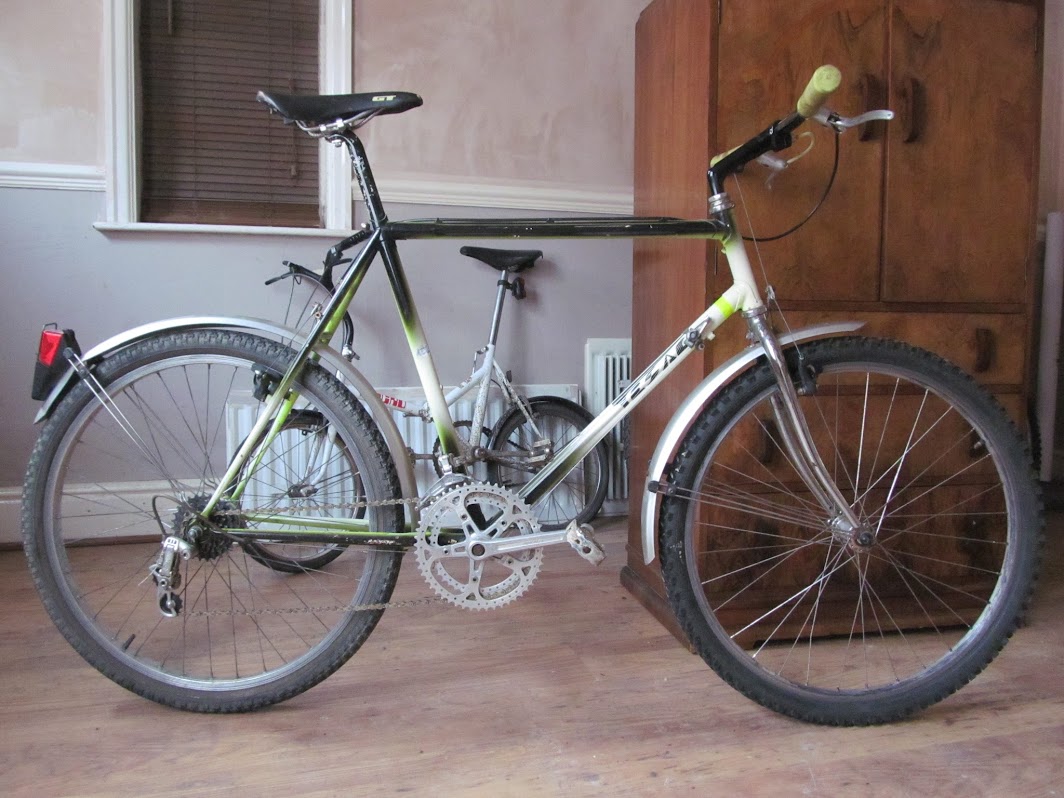 I had intended to just pop up the road/track, but went a bit further and got distracted into exploring a rather muddy footpath! 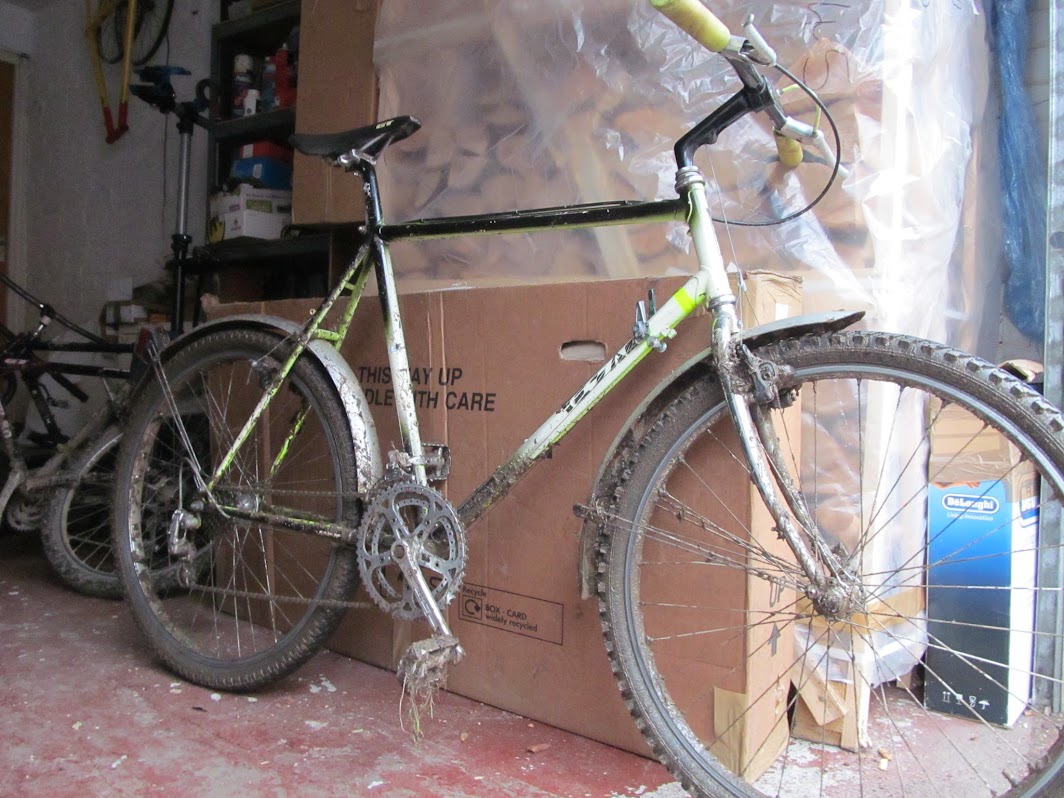 I rode about 15 miles, minus a couple where I swapped bike to my friend's On-one Scandal to let him test Il Flauto. Considering I'd not set it up properly, had just thrown a cheap wheel on the front and not bothered to put on tyres that would give any sort of grip in the mud I'm delighted with how it felt to ride. Something about it just feels "right". Considering I can't spent anything on it for awhile, I'll be happy to just fine tune it a little and replace the cabling if I have some for now. Longer term, there will definitely be some more changes, but probably fewer than I initially intended, given how much I liked the ride.

Even the very faded fluorescent yellow paint has really grown on me.
X

Very interesting, what's going on with the rear mech?
You must log in or register to reply here.