Eddy Merckx decoding for everyone

As probably everyone knows for 12(?) years there is a website cadre.org
...forget everything that's written there and try this...
The symbols to the left of the BB cover ("technical") are divided into 3 categories:
- a letter denoting the EMC employee responsible for the final "smoothing" of the frame before painting (A,B,F,G,M,P,T,D,Y,L,N,J,S,H,K, unusual 0, ^)
- a number indicating the length of the seat tube in cm measured c-c (for example 2 means 52 or 62, 8 means 48 or 5
- letters indicating tube type, geometry or model:
R = Reynolds 531
C = Corsa
X = SLX/SPX
CX = Criterium
TT = TSX
M = Strada (Matrix/Cromor)
TTB = Century TSX
XB = Corsa Extra SLX century geo
WW = Strada since 1992
other types/models did not have "own" markings; a clever observer noticed the "double" M: until 1986 (~A1500) it was an employee code, since 1987 the Strada model designation.

Have a good time

Thanks for posting this up
Certainly ties in with mine which was purchased new via the factory sale back in 2001.

It is worth remembering that between the time of building a frame and the time of selling it can pass... a lot of time Until yesterday the record was 2 years... but it was on the German Kleinanzeigen that the bicycle bought as new in May 1992 was shown (beautiful Corsa Extra in the Domex/Weinmann 1989 painting pattern) - the frame was built at the end of 1988...not bad

Well that is interesting as my own Corsa Extra was bought new by me in 2001 when the factory said it was stopping production, or going to cut back on steel frames.
I had held off because I needed what they termed a ‘custom’ frame size in 48cm which because they were made in small batches cost more. Now with the sale they had two that had been sitting around for a long while they said, two colour choices and a price that was far cheaper than a standard Corsa. I couldn’t get back across so did final emails and then sorted payment and shipping through Schils shop Intabike in London.
I bought it later in 2001 but the numbers say it’s 96 -98 so it had been sitting waiting for me for a while
And to think I was going to buy a Flyer instead, it was only because of such a huge discount I could buy what I had wanted for a long time.
All my bikes can come and go but never that one.
E

EMC built the last generation of steel frames in 1995 (Arcobaleno, Corsa 01, Strada OS, Chrono WX, slightly renovated Corsa Extra New SLX and the unchanging Mx Leader) almost simultaneously with titanium frames (95% of them are American Litespeed) and alu frames (initially 100% made in Italy). And then carbon (also Italian)... steel has been losing since 1996... and this meant that stocks of steel frames were growing alarmingly - especially in unusual sizes, and then stocks of steel tubes... This is where the highly regarded "limited series" of Corsa Extra and Mx Leader in the "historical colours" of Molteni, Motorola, 7-Eleven came from... ...to the American market, of course.

Well that means mine was sitting around patiently waiting for me to come and collect it
Mine is in SLX new.
I hear what you are saying about steel being out of fashion as when I came over from Australia back in 2001 and wanted a steel Merckx, even back home I was being laughed at, my friends thought I should be going for carbon or Scandium and couldn't believe I would come all this way and buy steel. Though I was lucky as looking at the old price list for Intrabike the standard Corsa Extra was £495 with the custom, basically anything under 50cm and over 60cm was £599 :shock:
In the end I ended up paying £350 all in delivered to Scotland. Paid a deposit and then balanced it through Interbike, who I must say were and I imagine still are the coolest most helpful guys that ever worked in a bikeshop.
It's still my pride and joy, and while it has been well ridden especially in it's earlier days, it still to me feels like my new bike. I do baby it a bit these days but we have been through a fair bit together and since my adventure started in this country it has been the one constant. 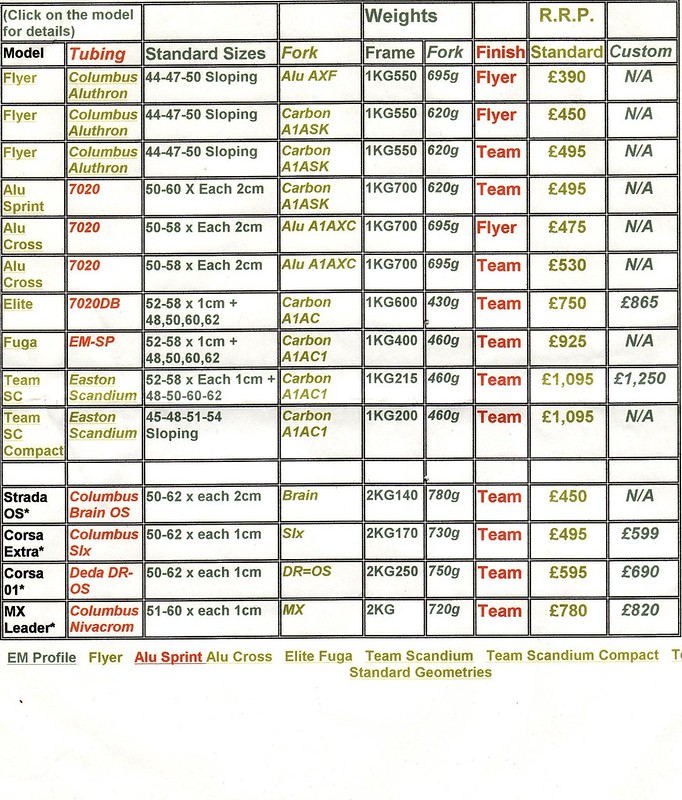 My build card, still in it's envelope 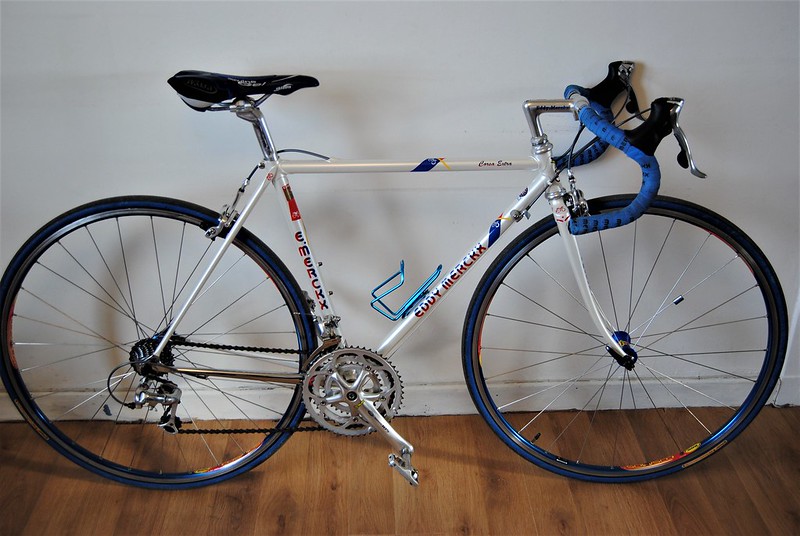 Thank you. Very interesting information.
The table shows that the lightest steel frame offered at that time was...Mx Leader (I did not expect this) and Arcobaleno (the most technologically advanced EMC steel frame) is no longer on offer. There is also no Alu Mega, Alu Team, Alu Carbon.
Build card contains a lot of interesting information:
G4478 was built in early 1997
48 - height of seat tube
BX(B) - SLX New, century geo
A - FD mounting
SG - type and arrangement of slides on top tube
PB - additional holders for the bottle on seat tube
STI - slides on head tube
A - chrome-plated FD mounting
C - chrome plating right chainstay and dropouts
DRW - painting design, DR is the general design code used 1996 - 1997, W = white
KC - stickers pattern
This bike is beautiful...

Thank you very much, while some of this I know from the bike and from ordering I didn't realise what they all meant on the build card, so thank you very much.
The price list above were for frames that was for the end of 2001/2002. I'm glad I printed it out back then and just kept it in a small folder with the other paperwork. Shame I didn't keep all the correspondence.
I will add this information to the folder
I still think it's funny that when I bought it I just liked steel frames and of course, this to me was my favourite wish frame, and while steel was going out of fashion it wasn't considered 'retro' or 'old' like it is now. So it is funny to have something from new, that doesn't feel that old to me, to be considered retro. I bought it because when I originally rode one it was light and fast, it still is light and fast. 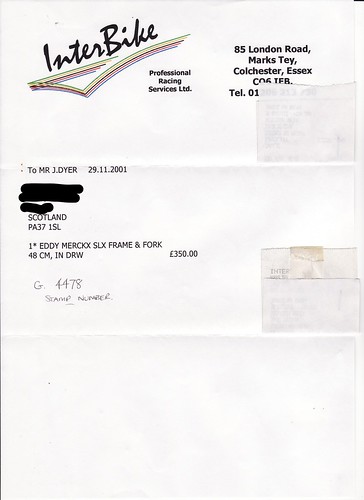 thanks a lot for sharing this!
You must log in or register to reply here.