I am just starting on this Holdsworth Mistral. I think its a Super Mistral, and I'm trying to date it and work out what equipment it started with.

As you will see from the attached pics, it's two tone colour, fully chromed front forks. The head badge is a bit faded but is very dark at the bottom, which may help dating.

The serial no is 10392. Not sure about the first digit because the BB is slightly damaged.

There is so much extra stuff to remove hub and rim dynamos, panniers, loads of tape and string holding things together.

I have tried the Holdsworth serial number databases, but I can't really work it out.

I have lots of vintage wheels and derailleurs but I do like to be period when I can.

Any help will be appreciated.

Very nice. Mine’s a ‘73 and looks very similar to this.
Edit. Is there the remains of a small ‘banner’ shaped decal on the top tube towards the steerer tube? The Mistral has those and if, when you take the rear brake off the drill hole is ‘filled’ inside the bridge it’s most likely a Super Mistral.

Yes. It has the small banner. Thats how I identified it as a Mistral.

As you can see from the photos I have a lot to remove and certainly the brakes will come off for cleaning so I will check the hole.

Im now debating as there is wear on the decals if I need to repaint.

Don't paint it. Clean up what's there. Too many of these get re-painted and it de-values them.

Good luck in trying to date it.

Along with Raleigh, they went through so many transitions, it's a bit of a minefield.

Holdsworth even managed to take over the last 2 years production of Freddie Grubb.
J

I really don't want to repaint it. It would have to be enamelled for the two tone, as it was originally, and even if I do the prep and the decals, that costs.

As I remove the tape, I am finding more and more paint damage.
One Mistral decal has been destroyed, the other has a missing corner.
The main downtube Holdsworth has letters missing.

The gear changers are Shimano. Wrong type, so have been taped with loads of electrical tape to stay put.

Every single fitting dynamo, lights front derailleur, cable guides has tape beneath it.

I'm going to see a friend of mine who is a good judge of whether I can salvage it with the original paint. If I could remove the decals, then I would have a chance of stabilising the rust that the taping hid, colour matching the major areas, and then applying new decals.

I have now removed the rear brake, and there is no insert now. That was another part all taped to hide the rust.
C

In the later 70's the Mistral no longer came in a Super model with its fully sloping Italian style fork crown, reinforced rear brake bridge, bushed brake hole as well as fast back option. The Super Mistral usually had another "Super" transfer above the "Mistral" with both placed singly and obliquely on top of TT. This frame appears to have the Mistral decal only.

Indeed the Super is not advertised in the 1978 catalogue. It was theorized by Kilgariff that the discontinuation of the Super was partially because of the increasing cost of chrome. The 1978 Mistral was advertised as a touring machine and certainly appears this bike was used for such.

The chromed fork on 010392 does not appear original as it is not typical of the semi-sloping fork shoulders for the Mistral. This would explain the lack of chrome other than the fork and would raise the question of other frame damage. I would bet the number on the fork does not match the BB number. A lot of bits on this frame have been replaced. Still a potentially great restoration project! 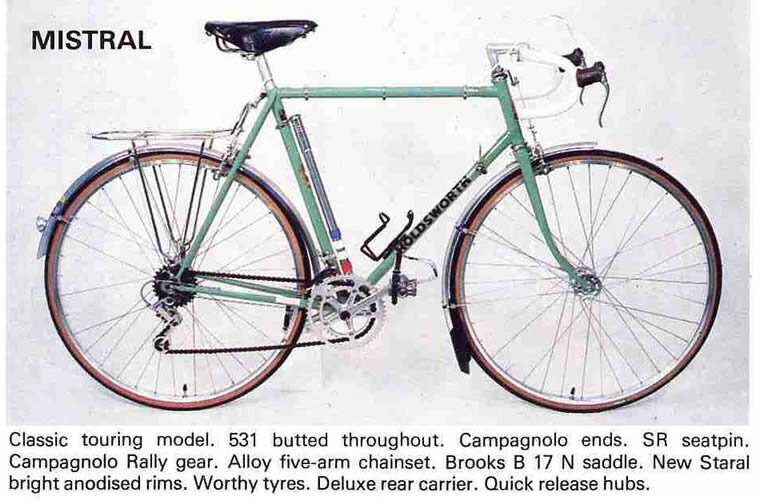 I concur with CBguy- that's a post-'77 Reynolds decal too.

I once tried to date a Holdsworth, but she walked out on me claiming to be two tired.
You must log in or register to reply here.