Having built a few bikes now that either I just can’t ride and enjoy with youthful abandonment due to their NOS’ness or the Manitou you just can’t ride without it cracking and needing reconstructive surgery I seem to have only a couple of "go to rides".. a fact not lost on the wife, who asked that surely there are some iconic Retro bikes that don’t cost a fortune and you can ride and ride.
After all there is only so much pleasure you can have from staring at a wall hanger and as per Regans_Ev recent epiphany you have to question their true value, and for me its riding them that counts and makes them special.

So I thought I'd follow one of Longuns mantra's, Start cheap build it strong and then go ride the crap out of it, have plenty of laughs along the way and if you break it .......your just walking home pushing your parts donar for the next build !

So here is my Bike a whole £45 investment from Ebay, complete with the seatpost on back to front and as advertised …………the seller came good on the free diary (top bloke)


Pics as per Ebay listing 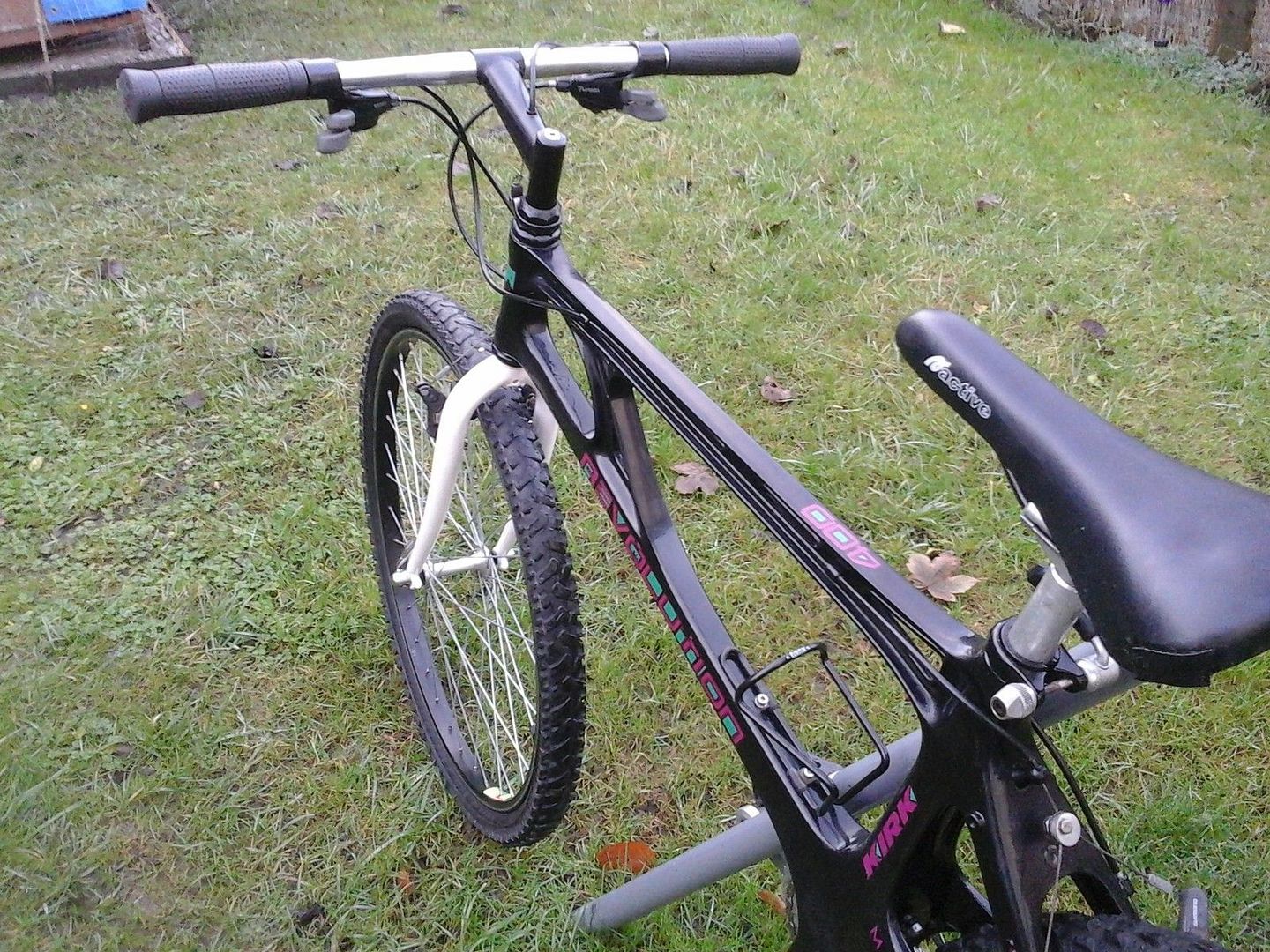 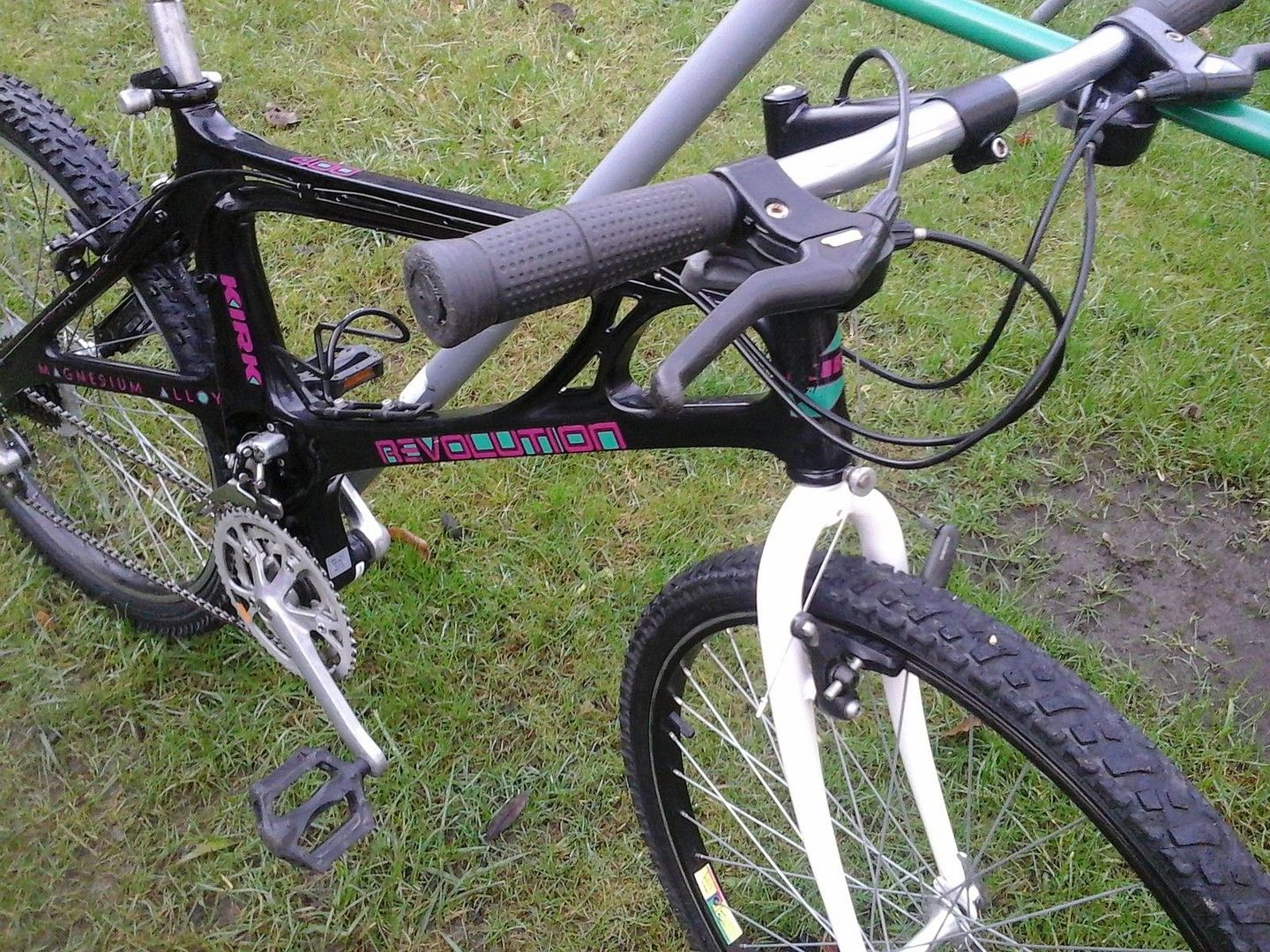 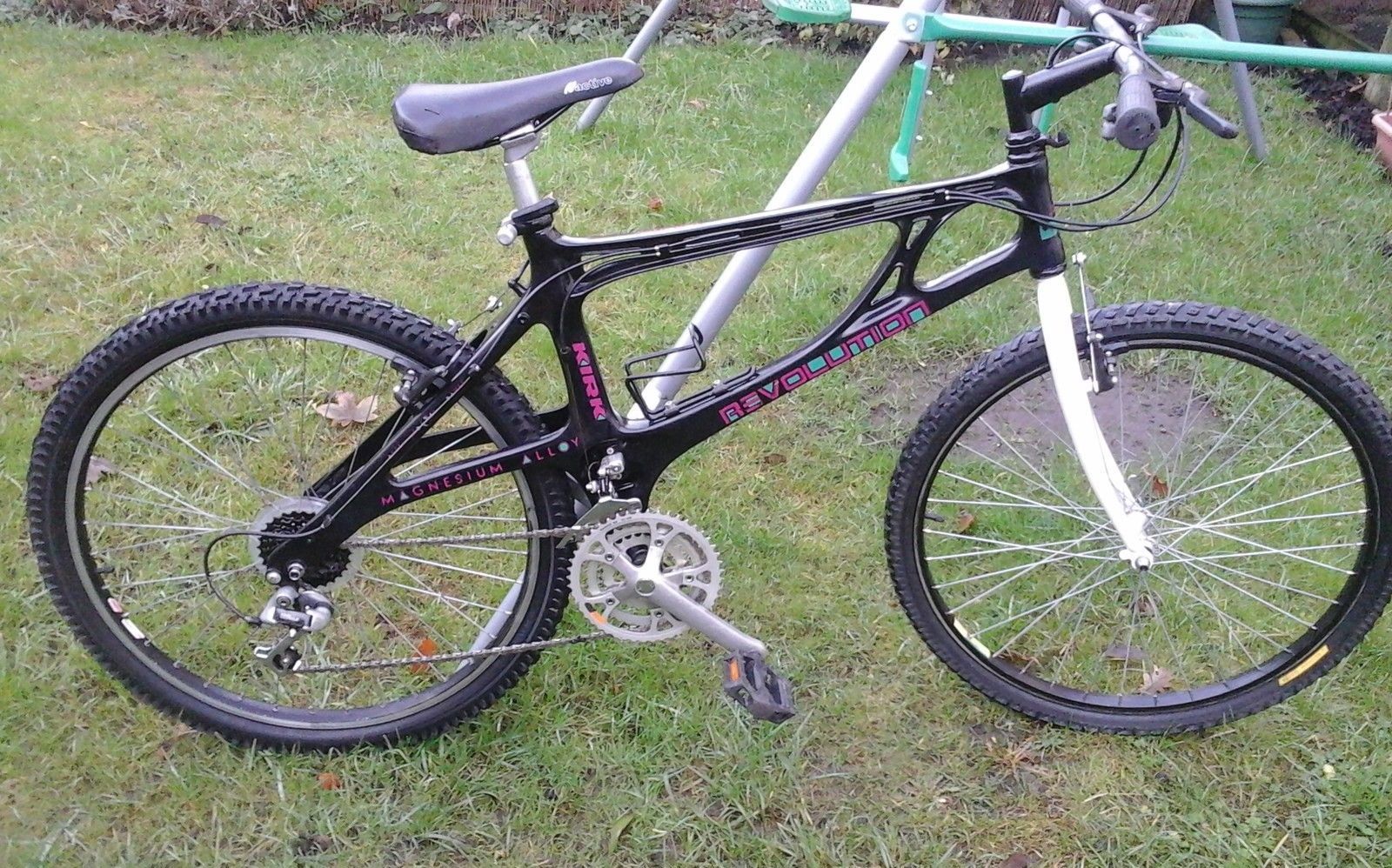 It just had to be a Kirk, (for the uninitiated) what’s not to like about Kirk, its British, its Iconic just like a Sinclair C5, the design screams the late 1980's, comes complete with pioneering (interesting) use of material… Magnesium, which at school we used set fire to in a Bunsen burner and a quick google search confirmed Magnesium is widely used in Flares, tracer bullets, incendiary bombs, and fireworks !
and of course not forgetting the “unique” handling properties so eloquently described by L.G.F’s in many of his postings on all things Kirk,

So its safe to say I went to pick it up with an open, and given the above, my expectations were very grounded, rather akin to the low asking price, first thing that struck me was the quality of the build (weighing in at what feels like 30lbs+) she ain’t no light weight despite Wikipedia describing the properties of Magnesium as


i. Magnesium's characteristics are similar to its sister metal, aluminium. It not only has the lowest density of all the metal elements, making it the lightest, but it is also very strong, highly resistant to corrosion and easily machinable.

ii. Magnesium is the lightest of all the metal elements and is primarily used in structural alloys due to its light weight, inherent high strength, and corrosion resistance, with U.S production costs being almost double that of Aluminium it’s primarily use is restricted to the aerospace industry,


Okay she’s a dog turd…. But for £45 (and the free diary) it’s a project for the dark nights and in the immortal words of Owen Paul from the 1980’s it’s going to “my perfect waste of time”.

If you fancy a read on British innovation check out http://www.kirk-bicycles.co.uk/Kirk-History.htm

On the plus side apart from a small amount of bubbling on one small section the frames had a very easy life and depending on the soothsayer of doom being right about its handling characteristics it may well stay that way.
Either way its going to do a Lap of Mountain Mayhem just for the sheer hell of it, hopefully going head to head with Longuns F.S Cannondale THING…. A bike designed with equal beauty and finesse.
But being Magnesium we can burn this beauty on the team Brazier in the wee hours of the morning and have the worlds biggest flare/ come party beacon.

Off to the shed to strip, clean it and empty the parts bin for suitable upgrades, already doubled the value of the bike by fitting a red label Flite (although I don’t think it works like that)

Going to be a mix of period XT and Deore in place of the Exage.
M

You need some purple ano on that Captain Kirk.

S'diffrent I'll give you that. Don't bring firelighters to Mayhem. We don't want another Hendrix moment

Awesome.
My mate had one of these, the one time I got a 'go' on it properly I was quite impressed, weight aside. Personally I think it's Dawes that made the mistake with these, they specced them with drab components & colour schemes and that's what they were judged on in the showrooms. I dare say the frame faults were a result of cost cutting too. They get a bad rep despite all the other ridiculous designs during the era from the major manufacturers.

Do it justice & hope to see you both @ Mayhem.


Mike Muz 67":3reddy9t said:
You need some purple ano on that Captain Kirk.

S'diffrent I'll give you that. Don't bring firelighters to Mayhem. We don't want another Hendrix moment
Click to expand...

Mike you know darn well there will be a few bits of Purple hung on it, however "those" Purple SRP crank bolts are staying firmly in the parts bin 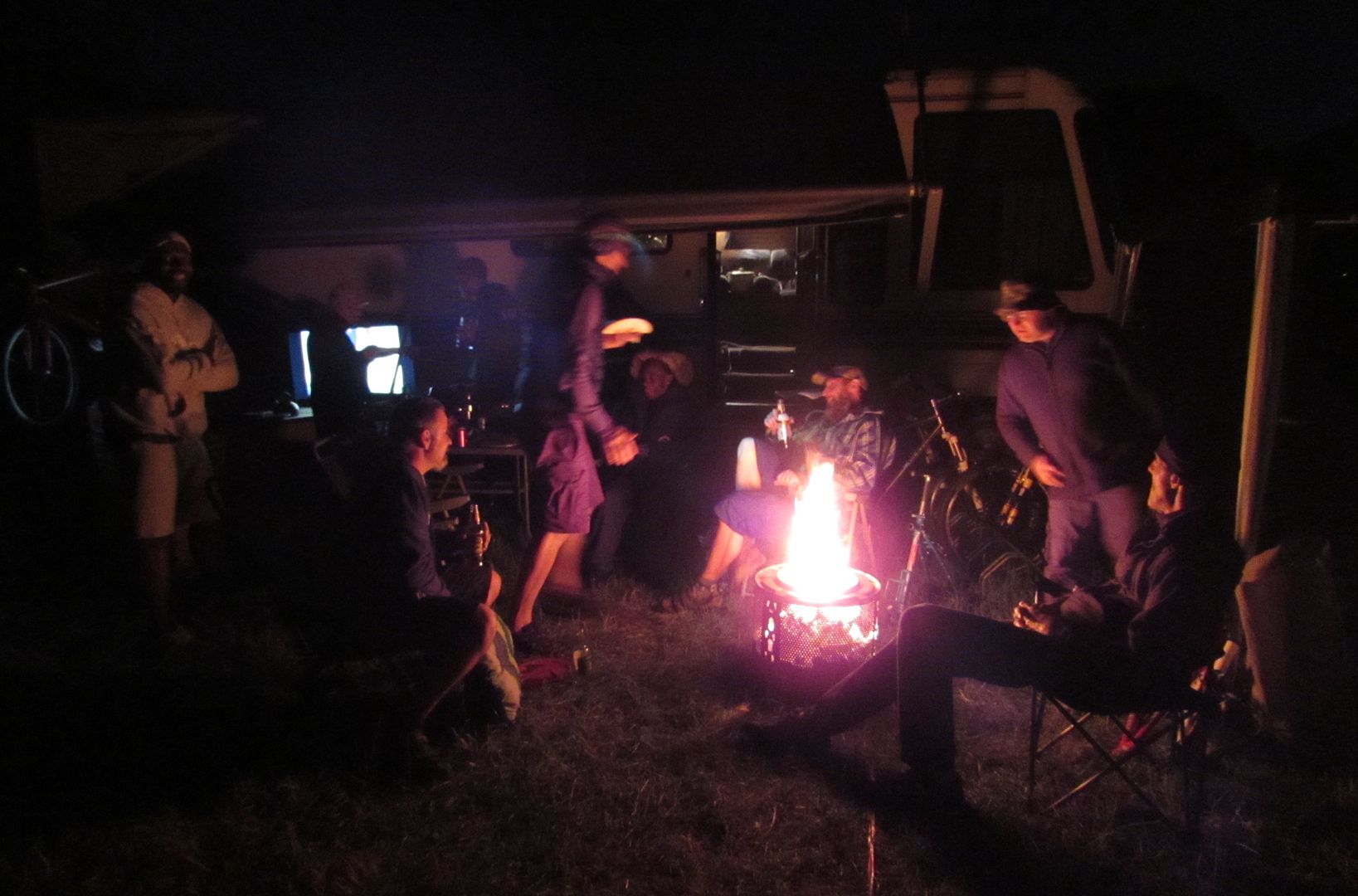 do you think I was ripped off ?

he was open to "Best offer" but given it was the season of good will, and having sank a few beers I got carried away and paid the man the full £45 he was asking

Haven't I got long legs? :shock:

I'm far right in the photo. That's the only far right, mind!

Flog the bolts to someone who doesn't ride bikes Spud, there's a few of those on here!

anyone remember Tomorrows World........ by all accounts One Ton of sea water and you get a Kirk :shock:

Nice to see a bike you can ride besides the ozone spud I do like the kirks but I would snap it in no time :facepalm:
G

Loved my Kirk back in the day, but moved on after two broken frames. I'd probably have another for sedate riding around.
You must log in or register to reply here.