As everyone here knows, back in the days we all had our realistic dream bikes, and then there were the bikes we had in our posters. Cannondale Super V 4000 DH was The Poster Bike for me when I first saw it in Mountain Bike Guide magazine 1996. Had my hopes high for it, but when the -97 Finnish bike catalogue was finally published, I found out that it was the most expensive bike you could buy here off the shelf with a price of 34000 Finnish marks, equivalent to about 5-6 months average monthly earnings here back then (about 8000 current euros) So buried my dream for some decades until finding a potential project bike last Autumn here.

The bike itself had a lot of work to be done, but it had original paint, Sachs brakes, Moto fork and the original hubs laced onto Mavic 121's. Originally it had Sun Rhyno Lites, but these 121's were a good upgrade. Was also missing the Coda Magic cranks as the original owner had broke those (probably one of the call back ones). Wanted to make this look a bit more to my liking, so instead of codas went for roox cranks and cockpit. Biggest issue with it all was with the fork that was leaking badly and it had a nasty dent in the right stanchion. 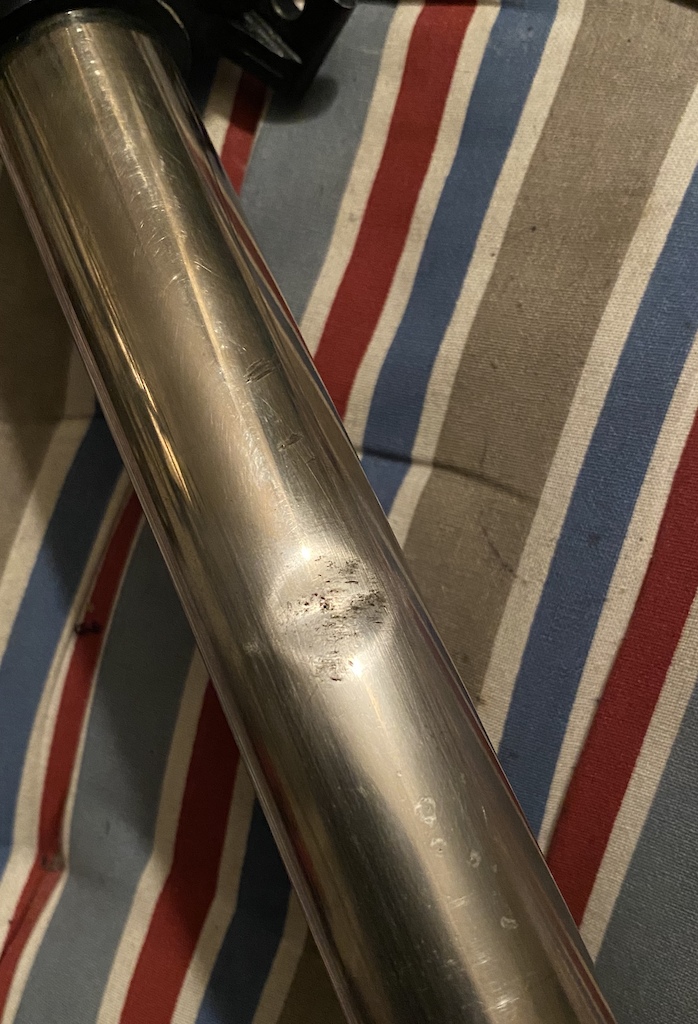 Headshok isn't the easiest fork to service as it needs some special tools which meant I had to dremel myself the castle tool and the dummy cartridge tool. After that I had to source new stanchion seals for it and this seemed to be a mission impossible.. Finally I found a local seal manufacturer who made me custom ones based on the old seals, and the price was quite good considering customization, about 40 euros per pair. Next up I had to tackle the most challenging part, the dent.. Ended up having my friend machine me a cylinder as close to the ID of the stachion as possible, greasing it, jamming it in connected to a bar, giving some heat on stanchion and gently hammering the dent against the cylinder. Also applied some epoxy to the scratches below and finesanded everything. 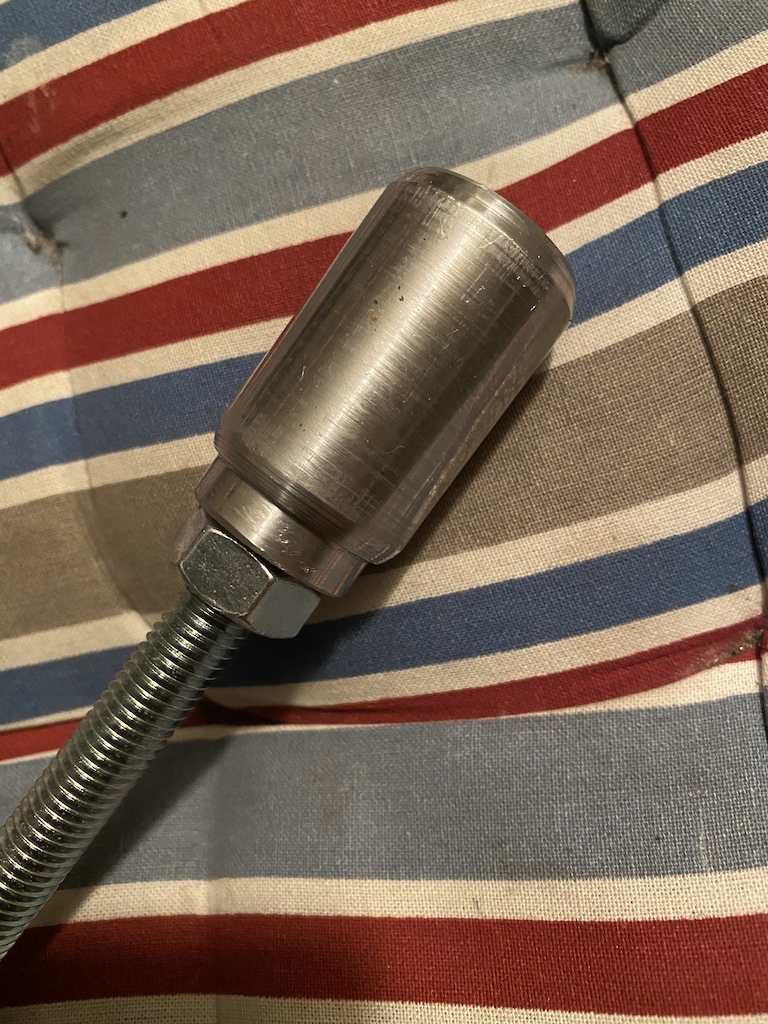 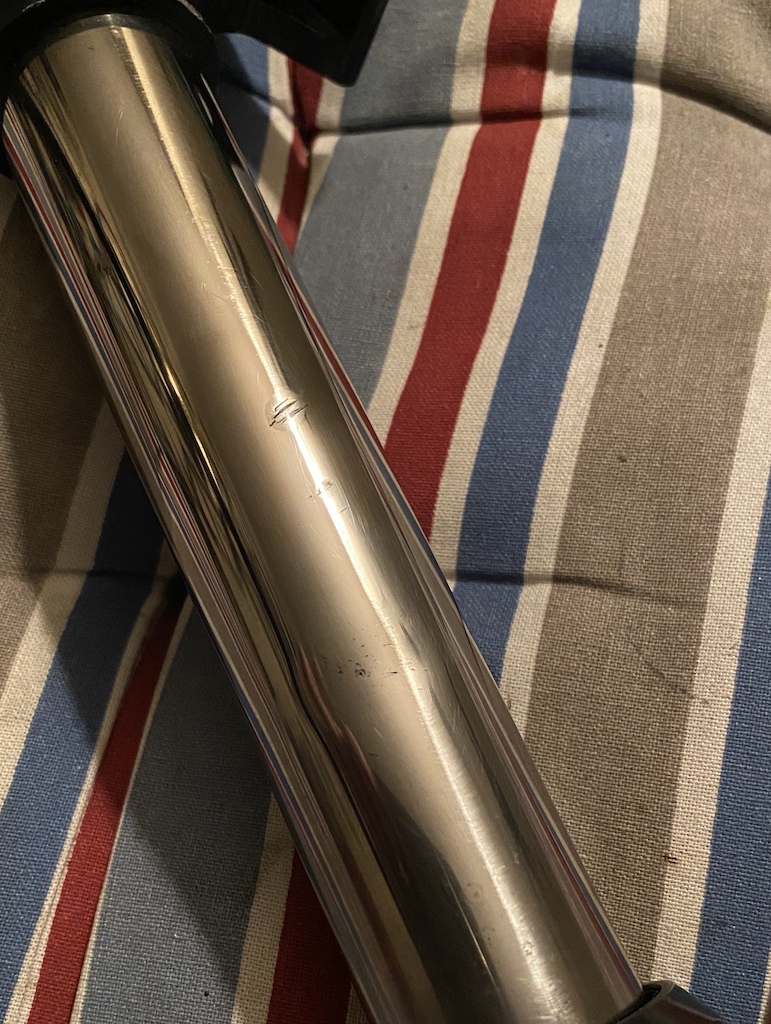 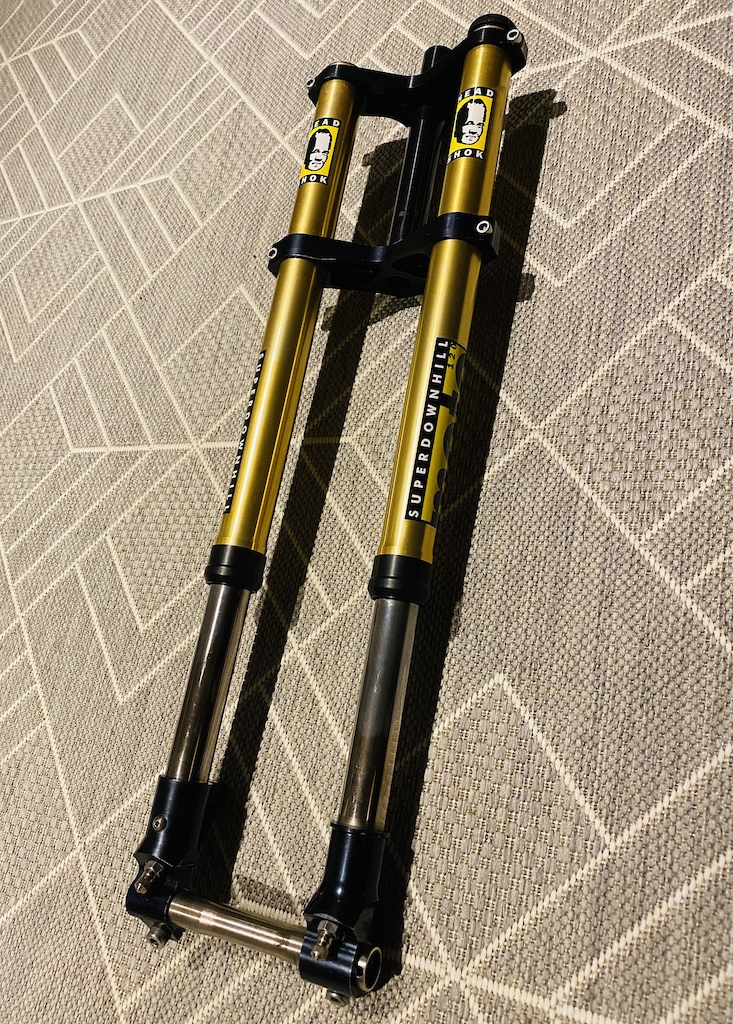 There's still a small bump on the stanchion, but it doesn't leak that badly, so all in all it came out ok for my first dent fix!

Other than that the restoration was basic cut'n polish, affordable part hunting and small tweaks. This is how it turned out! I'm very very much looking for the Spring and a chance to test this in my local hill trails after 23 years of waiting Gonna try also some offset bushings on it as the geo is a bit high and would benefit from a little slacker angles. 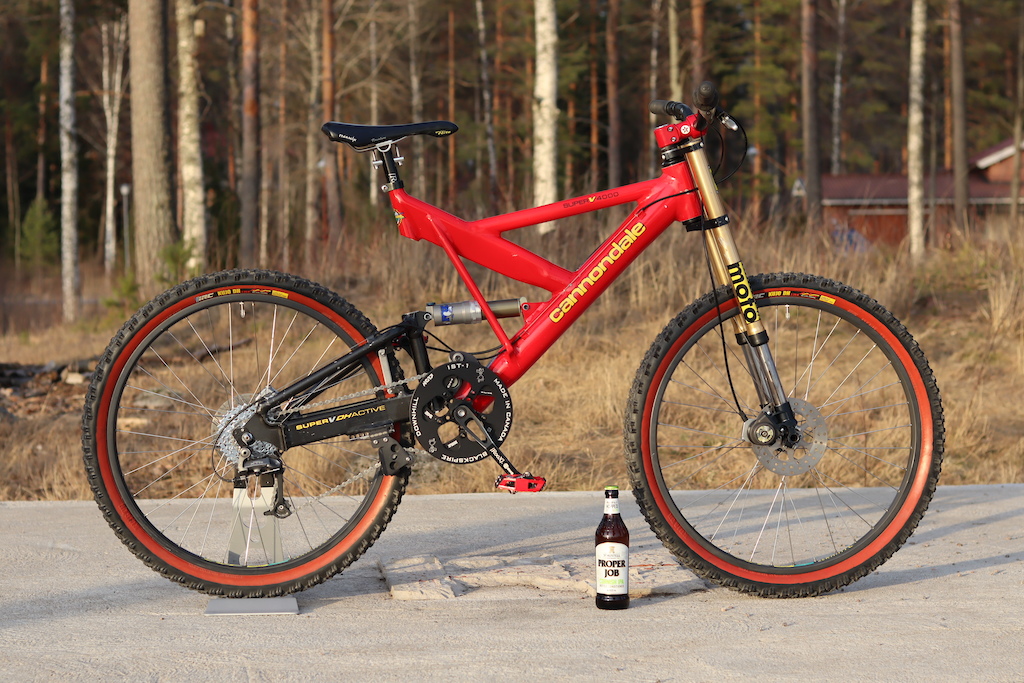 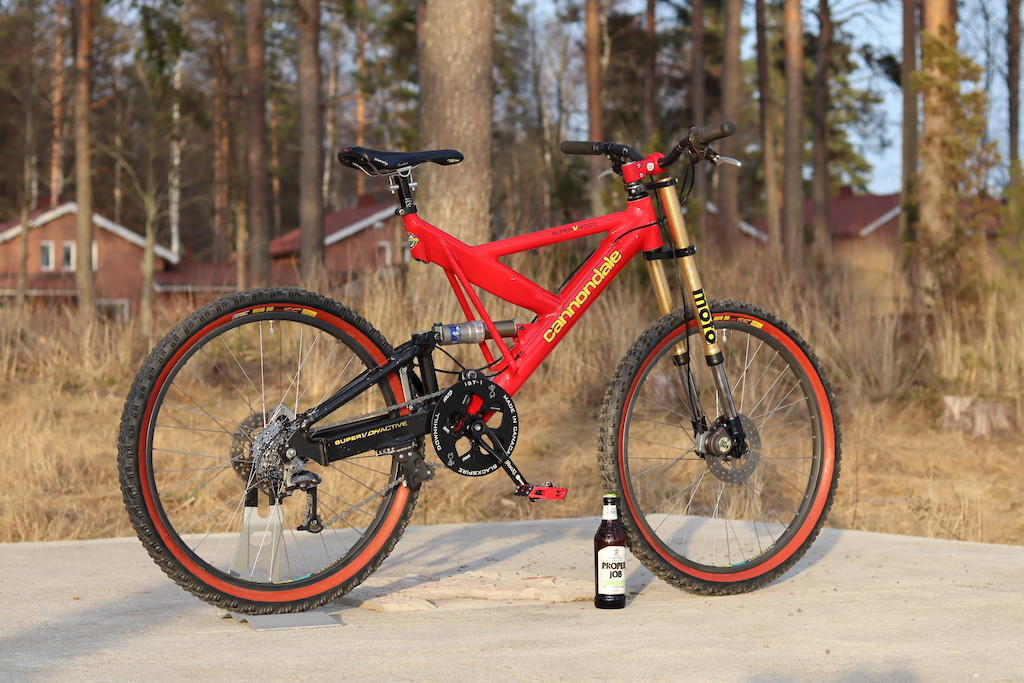 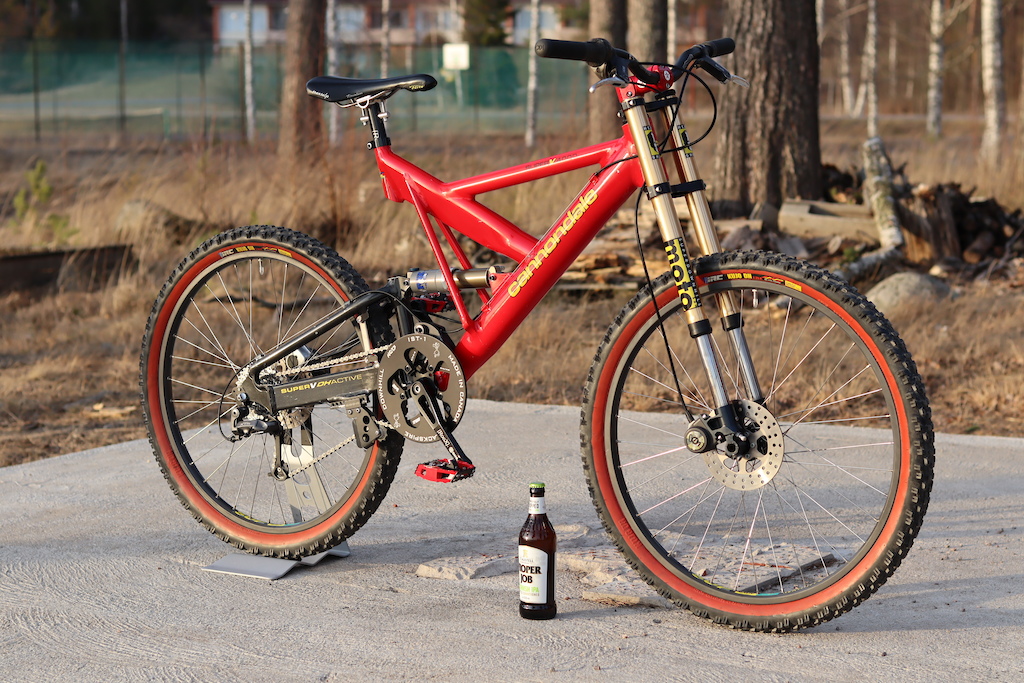 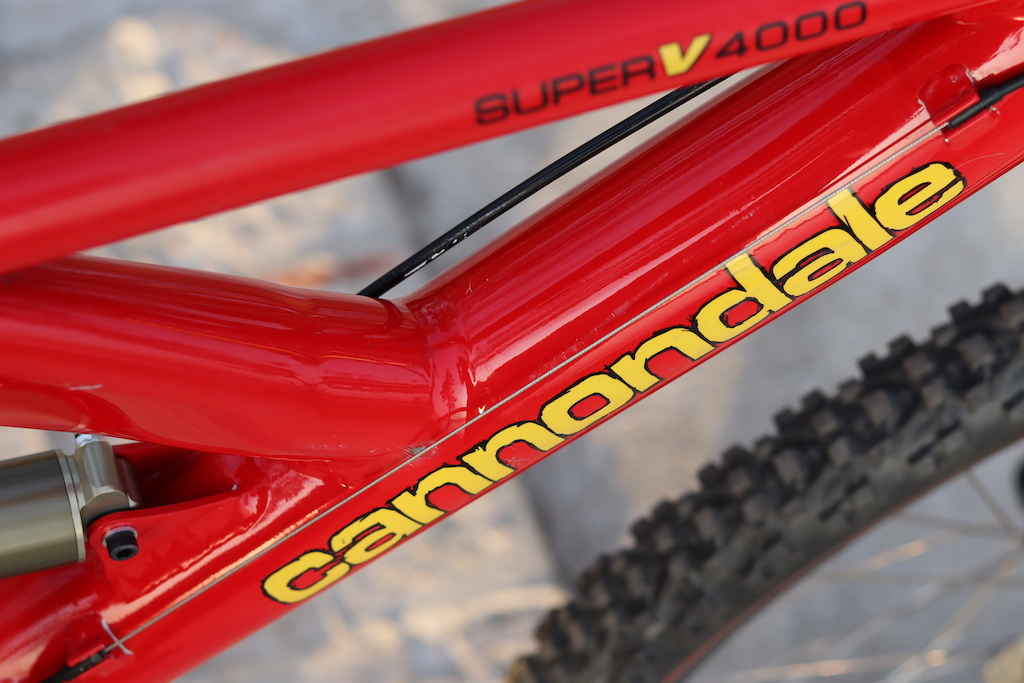 Good job on the dent repair, most would probably have searched for a replacement, fair play
P

Great effort on the dent extraction, ride looks really good, so many nice bikes on here but got to say I don’t think I’ve seen one of these in a long while. I’ve got a giant atx dh with dc shivers that I really need to give some love to. Got to love a triple clamp upside down fork.

Love the look of these, a friend of a friend had one from new. My friend took me round to his house one day and introduced me as i had been riding dh for a while. After much talk i was allowed to have a ride, even though he had not had it offroad yet, but was only allowed a quick ride up and down his street. Funnily enough, the thing that stuck in my mind the most at the time, was how much it had cost :shock:

Great to see this on here

Thanks guys, appreciate it. I tried to locate a spare stanchion for the Moto by it's part number and contacting old Cannondale experts/dealers, but it was like finding that legendary unicorn poo :roll: I also found a second Moto fork for a bargain, but as I managed to fix this one I have currently two of them..

And I really think that even though there's a lot of guys liking the traditional Super V design, they would've looked a lot better by adding that sloping top tube to all of them..

I LOVE this! Great bikes. Top job on the stanchion too.

I actually know where one of these is, gathering dust. Maybe I should rescue it!


Splatter Paint":2fsc6guo said:
I LOVE this! Great bikes. Top job on the stanchion too.

I actually know where one of these is, gathering dust. Maybe I should rescue it!

DO IT! And thanks mate. I have some spares for the sachs brakes and also a spare Moto, so let me know if you’ll decide to tackle the challenge
You must log in or register to reply here.