I've wanted a clockwork since I was a teenager. Well this one turned up on here for the right price (and in the right size) so I finally get a chance to scratch the itch... Thing is I'm not sure exactly what this is. Welcome some input on what I've got... 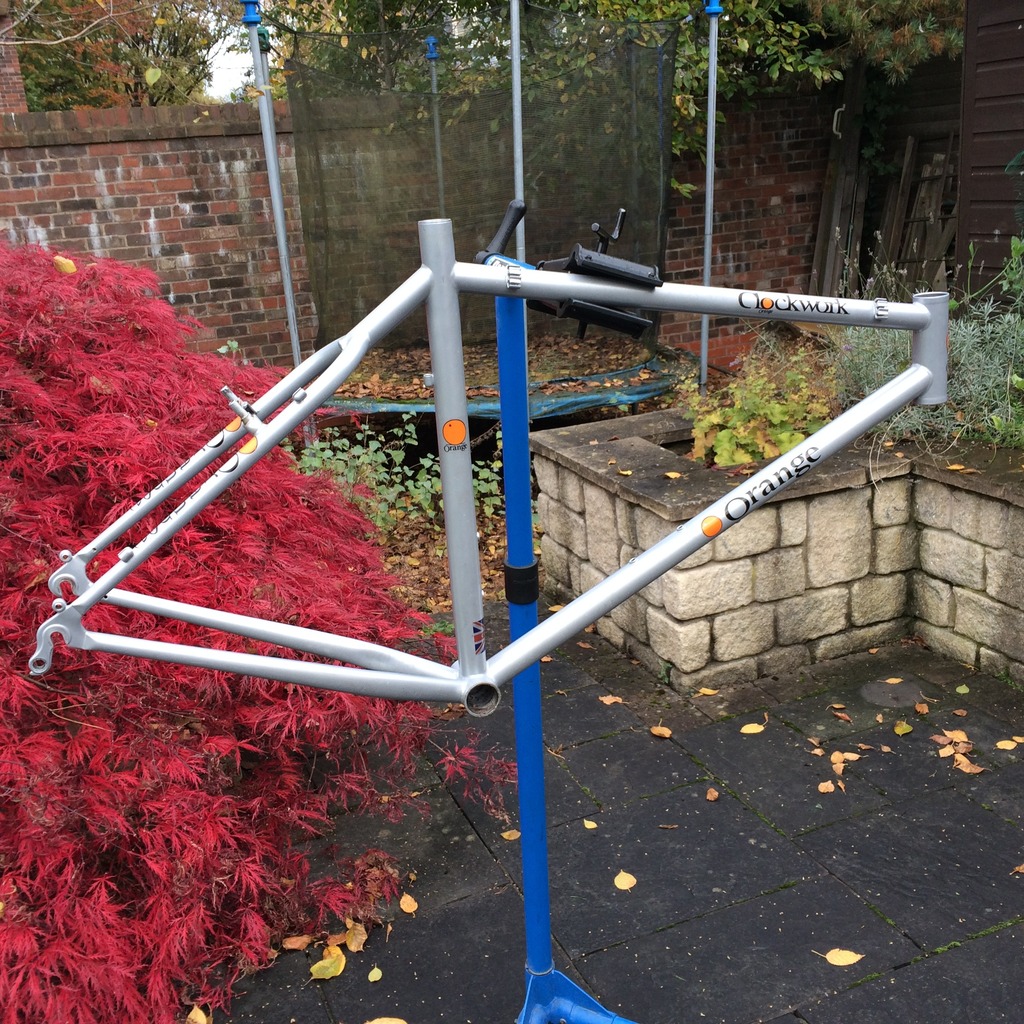 Now it's here the first thing was to work out what bits I need. I started measuring and googled for more info. Seems to want a 31.8mm seatpost clamp, and there's a shim fitted in the seatpost

From looking at this link (https://www.orangebikes.co.uk/support/f ... imensions/) it looks like either a 98/99 clockwork, or a 97-98 C16, or something. In fact I should probably be posting in the "modern" bit!

Anyway. Got some bits lined up, nothing fancy but a nice usable lightweight xc build planned... would be good to date it though so I can think about whether I bother to make it reasonably period correct or just a practical build. Quite tempted to go for a modern 1x9 drivetrain actually, we'll see though - I'll probably end up using mostly what I find in the shed.
G

Always good to see another Orange. I scrimped and saved hard to get my lucky break of owning one, be it just frame and forks.

I'd ask where it came from and what it was sold as. Also, check the frame number which is usually under the BB shell. The 31.8 dimension is the outer measurement, so the actual seat post size would be 27.2mm and 26.8 for pre-93. The frame has 1992 decals applied but with the cable routing and lack of chainstay bridge (removed on '92 frames), the frame could be 93 onwards. But there members on RB who will be able to nail it probably...

Look forward to seeing the build up.

Orange 🍊 Fan
Re: My first Orange.

I think your right, looking at the frame it looks like a Orange c16 frame, no seat pin braze on, wish bone looks slightly fatter than a Clockwork.. looks a very nice neat paint job, with the smart 1992 graphics to boot..
G

I agree about the '92 graphics being smart – Orange has been through so many style variations and I think this period is the most stylish and complete. Mine came with the early '93 sans serif type, which would be my joint favourite with the '92s. Anyway, if it's not a Clockwork then a C16r is gonna be pretty cool.

Re: My first Orange.

Its just such a versatile frame, you can do pretty much anything with it and it looks good.
I fitted discs to mine(via hope No2 caliper and never looked back.
Damn shame i sold it, but its was after an accident and i couldn't face riding again.

I'd love another, but 21"'s are harder to find when im in finances Always seem to turn when im broke.

What diameter is the headtube? If it takes a 1 1/8" headset then it's post-98. Looks exactly like my '98 P7, apart from the paintwork. It has an odd-sized seatpost, 29.6mm I think. These are great frames, rode one for years, and the 1 1/8" headtube makes them much more versatile than previous versions.


andyz":2rg3wevi said:
What diameter is the headtube? If it takes a 1 1/8" headset then it's post-98. Looks exactly like my '98 P7, apart from the paintwork. It has an odd-sized seatpost, 29.6mm I think. These are great frames, rode one for years, and the 1 1/8" headtube makes them much more versatile than previous versions.
Click to expand...

Yep, it's 1 1/8". Which I must admit I'm quite happy about. So not as retro as it looked at first sight but still pretty useful. I suppose it could be either a C16 or an anniversary Clockwork - but seems from what you guys are saying that there ain't a lot in it in terms of what it will do/how it will ride.

Actually now I know the era I'm going to go for a "whatever works" build - some bits will probably be older, some newer, I'll just go for a mix of what I have and what I like, and let it evolve once I've started riding.

The graphics are a bit hit and miss to be honest (some are peeling) as is the paint (some damage in transit unfortunately) but that's fine by me as it's going to be ridden...

...anyway I'm off down the workshop in a bit so I'll start putting some bits on it if I have time. Will post some pics if I get anywhere

Thanks for all the input so far!

Re: My first Orange.

Weighs 2105g according to my Chinese scales.

The 7 indicates 1997 as year of manufacture then. As a matter of interest, where is the slot in the top of the seat tube? Front or back?


andyz":2hf3yxqc said:
The 7 indicates 1997 as year of manufacture then. As a matter of interest, where is the slot in the top of the seat tube? Front or back?
Click to expand...

Front.
You must log in or register to reply here.