pw_pw_la said:
Thanks Joe! A very lucky find: Mavic 217’s from '94 in the bronze/champagne colour. I forget what they call them in the catalog. Pre-laced with White Industries hubs from around the same time too!

Anyway, gives me a good excuse to post this in this thread too:

Excellent - thought it might have been, I’ve got the same 217 ‘Bronze’ blue label on the front of the cinder cone and a 217 ‘Sunset’ black label on back of the P7. Just sorting out my matching rims.

I need something in black for the next build... ideally from between '90 and '94. But have no idea what or where to start!

She is fun! Nimble and lighter than I'd have thought. Or at least light-feeling!

I'm still playing around with positioning and have a ways to go before the bike feels just right. I would certainly like to get my hands on the Azonic risers in the higher (highest!) rise, as I think that would help. This is always the problem with preferring small frames though. Small for me, I mean.

The front Tri-Align's, work really well. The rear... not so much. I need to spend a weekend really playing around with the brakes; adjusting pads and positioning to see what I can do. They might just need new springs and some patience, I'm not sure. The bike has technically had two tune-ups in two different bike shops now, and neither have managed to improve the performance of the rear brake.

I may end up breaking the rules, and switching the front to the rear, even though the size would be incorrect according to all the literature!

If it's a case that the front just works a little better it makes more sense to have it on the back I think!

Shifting... Well, I switched out the bottom bracket as it kept bottoming out shifting down the granny and I think the one I had was a fraction too short. It's better now, but when shifting since, it takes two clicks on the shifter to move between one front ring and the next. So there clearly something still not right. It's better, and manageable on a ride, but far from ideal.

So more work to do there, too.

Anyway, that's the fun isn't it? Playing around with what you've got!

Those front three rings need to be replaced at some point soon anyway. They've all seen better days. So now I need to find something newer, or in better shape in a champagne finish for at least the big one...

Easier said than done, I'm sure.

Just a thought re front derailleur, but in my experience when I’ve had similar, turning the derailleur on the seat post ever so slightly so it’s not completely parallel to the rings, but at a slight angle (say 5o - angled in at the rear, out at the front ) helps give you a wider range on the shift from the bottom ring to top ring.

or do the opposite if got to much range.

Not sure what others think

Unbeknownst to me (they admired it a little when I dropped it off, and said nothing at all when I picked it back up), the LBS I had do the cabling and indexing decided to put a post up about the S-Works out of nowhere this week: 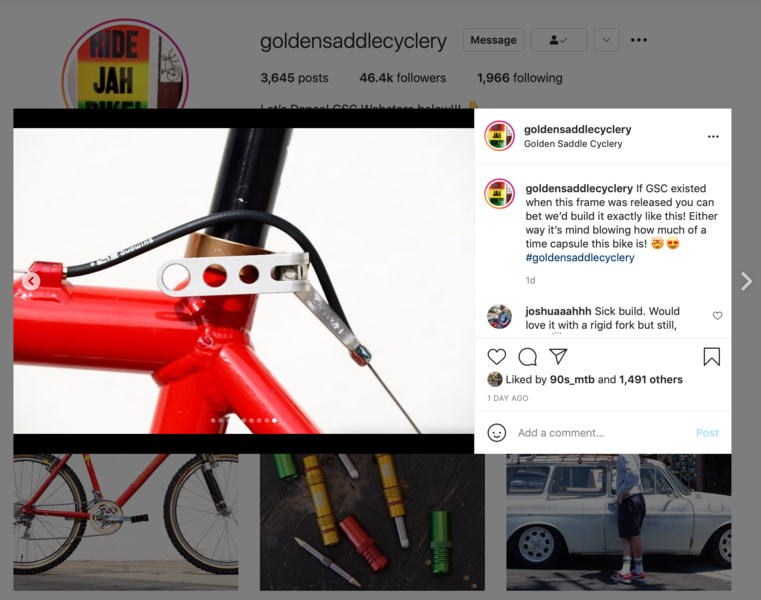 About two month's after they handed it over, and a few weeks since I ripped the pedal off the crank!

Thanks for checking over my work so thoroughly boys!

Anyway, it feels a bit odd having someone take photos of your bike without asking, or even mentioning, let alone positing it on some social media platform you don't belong to, with no attempt made to credit you for your own bike. (Sort of makes it seem like they built the thing too, no?) But that said, I do feel quite proud that my first ever build was admired enough by said shop to make this post, and the comments are all either nice or hilarious, as well.

I'm almost tempted to start an account just to bowl in there and give myself some credit!

It's a shame I didn't know they were going to do this and couldn't tell them to wait until I'd added the bar plugs, bottle cage, incoming fork brace, and fixed the saddle angle and post height, because it's certainly pleasing to have some high quality photos of your bike!

Anyway, this should tide anyone interested over until the afrorementioned SRP Judy brace arrives, and I can finally take these long-delayed finished photos.
Last edited: Jul 16, 2021

Looks like she had a good time though, full photo shoot

Who’s is the VW variant? I loved them, had one when I was 18 & a fastback a few years later, right down in the weeds…

Ps - looking at their pics, drive side pedal doesn’t look threaded all the way in, whilst surely it must be!! And re the rear brake seat cable, on mine I run the cable shorter under and around the QR as what I thought was a straighter less cable resistant line, might help with the rear brake topic. But go with whatever you prefer obvs.
Last edited: Jul 16, 2021

Ah, that's not a bad shout on the cable, actually...

I plan to spend the evening fiddling with Tri-Align's and brake pads, so you've timed that suggestion well!

Saying that, aesthetically, the above really does do it for me!

While on the subject of photoshoots and kink, I mean.
You must log in or register to reply here.