Article An Afternoon With U.S.E. 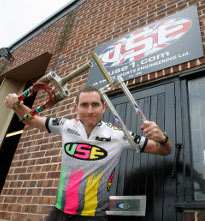 Pulling up at U.S.E HQ it dawns on me, over the years we’ve known each other, I had never taken up Rory Hitchens’ offer of popping by anytime for a tour round (they’re only 5 miles down the road). Right, better turn round and pick up some cakes then hadn’t I? Pulling up at U.S.E HQ for the second time in half an hour, I am greeted by a flurry of bike business activity. “We’re moving into the unit opposite” a huge pile of Exposure Lights boxes said as it crossed the road on the small industrial estate that is so often the type of place you find an industry legend like U.S.E.

Am I going to be met with an air of confused derision at my longing to unearth a pile of anodised purple loveliness gathering dust in the loft?
Probably. This place has after all ridden (pardon the pun) the waves of varying bike trends over the years, from the early days when you could “make something new a whacky colour and people would buy it” through first the ti, then carbon explosions and onto the successes of the growing night riding/ racing market and cordless light set ups. U.S.E may well have a fair few of the old faves still in production, but they are also firmly ‘up there’ with products as innovative and lovely (in a CNC’d kind of a way) as the Olympic winning TT bars and the Exposure Lights LED light range.

As it turns out, I am met by an ever enthusiastic Rory wearing an even more enthusiastic flouro green and pink race jersey from back in the day. Good start I think to myself. He still gets it. 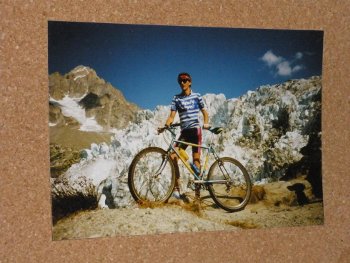 Plonked on the company sofa (a familiar feeling now after many a cocoa in the early hours of a Mountain Mayhem at the U.S.E. tent) Rory starts unravelling the company history. Started by founder, windsurfer Roger Sparrow back in 1989/ 90 when he sat on an office chair post ride and realised he needed a suspended seat post on his bike. Prototype and reality followed as did all manner of projects from bars and bar ends to front hubs and electronically controlled suspension forks. And let’s not forget that seminal flouro pink white and green race Jersey to match your team issue 1990 Attitude.

Rory was a pretty handy racer BITD - there’s a fair amount of evidence of his Raleigh and DBR days in those early MBUK’s. He’s a pretty handy rider these days too. Out as much as possible (his ‘possible’ seems a lot more frequent than my ‘possible’ somehow) on his beloved South Downs. We always seem to miss each other for organised rides, but somehow bump into each other on spontaneous ones often enough and I can testify he’s still quick.

After too much tea and even more cake, Rory gives me a guided tour. The first thing you notice is how busy everyone is. All scurrying around doing ‘USEy’ stuff. Racks of lights next to shelves of seat posts – all waiting for their round the world trip. Heading down to the assembly area, it strikes you how hand finished the things really are. Roger’s dad sits listening to the Archers while bonding Alien head units into seat post shafts. All segregated into colours and sizes, they set in bunches like lolly pops on a sweet shop counter. I don’t lick them. (but it is tempting.) 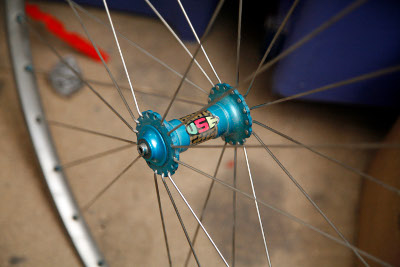 Ushered up a rickety ladder into the loft I anticipate delving about and discovering a box of NOS multi coloured retro handlebars and some prototype components seen a by seldom few. It’s like a premonition.
There’s the box of handlebars. A bit more delving uncovers a cupboard of prototype forks. “Oh, here’s a bit of a gem….the hub that never was”.
It’s gorgeous. The flanges are broken, and it never got beefed up for production in the end I am told. But anodised turquoise and carbon back in 1991. Nice. And yup, fluro decals standard of course.

I rummage through the anodised undergrowth of bars and shims and ask….”I don’t suppose…” – Rory reads my mind. “we binned them all. Only a couple of months ago too. All those original bolt up bar ends. In the same colours as the bars too. If we’d known these were still here….” NOOOOOO.
Makes me want to bin dive in the local tips for the rest of the afternoon. But I don’t. Do consider getting in touch with LGF and asking if he would. But I don’t. 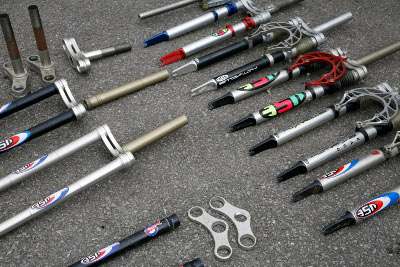 Unloading the fork cupboard I realise how prolific USE were at the early stages of suspension fork evolution. There were so many experiments.
Holding a one legged fork lower in one hand and a crown assembly that could best be described as cnc’d lovelybeautifulness, Rory describes a venture into electronic damping back in the mid nineties. The idea was to send an electric current into a fluid to stiffen it up instantly. The key was the ability to use a different current to allow tuneable damping. The idea being that you could ‘pre set’ a fork for a specific downhill run allowing variable damping for differing sections of the course. Unveiled at Interbike in 1997, it was never put into production but a variant of the intelligent damping system did go into tractor seats following the research. The TFI (trials fork Innit) fork did go into production. They appear on ebay here and there these days. I seem to be holding about ten in my hands as I rummage further. Prototype elastomer spd’s, another parallelogram hub, prototype Ti posts all seem to sprout out of every nook and cranny. Then we hit the retro stickers bin.

Stickers! You never grow out of stickers I am told as I am loaded up for the journey home. I like factory visits. This is the best bit, the swag doggie bag you invariably take home with you. I have timed this visit to perfection too, my new Exposure Lights are ready to pick up. I even toy with the idea of getting them bespoke laser etched with the Retrobike logo for extra tartness, but haven’t got time. They will however do this for you with a little warning if you decide to get in touch for a set.
And I can thoughily recommend you do, they are pretty awesome pieces of kit. And it’s dark when you use them, so people probably won’t tell you they’re not period correct on your 93 Orange Prestige. You never know, if you ask nicely, they might let you have a flouro decal to stick on them.

Talk drifts back to that classic flouro race jersey (hard to ignore as you follow it round the factory to be honest) and the idea dawns of a 20th anniversary re-issue….now there’s an idea. I leave thinking...they’ve still got it.

What a fantastic trip down memory lane. I had a set of the original monochrome Stealth forks on my Zaskar. i chose them over RC35s (and never regretted it once).

I'd love to get my hands on another set. They were beautifully made, just like all of their other bike jewelery.

Top interview........top company.
You must log in or register to reply here.

J
Some ideas for forks please