After some recent debate about the merits of 1x versus 3x gearing on this site, I decided to go through the maths. There are tables of gear ratios and so on to be found elsewhere but I wanted to investigate for myself. I’ve been wondering about some of the new, flat bar gravel bikes, and they typically come in 1x only, so there was a personal reason for going through the numbers too.

However, let’s face it, 1x vs 3x is not a debate that’s going on in the wider mountain biking world: 1x is the de facto winner. But I think it’s fair to say that 1x is the winner not because it offers a superior range of gears but because the range of gears has been slightly compromised in favour of other features to do with chain retention, frame design and dropper posts. Since the problems those features solve are not really problems for me however, I’m still interested in 1x vs 3x gearing.

Don’t expect an argument in favour of 1x or 3x though. If there’s an overall message, it’s ‘Don’t be simplistic’, and that’s all. If you already know it all, good. However, I suspect that’s rare—either that or the disingenuously selective use of figures is not rare. 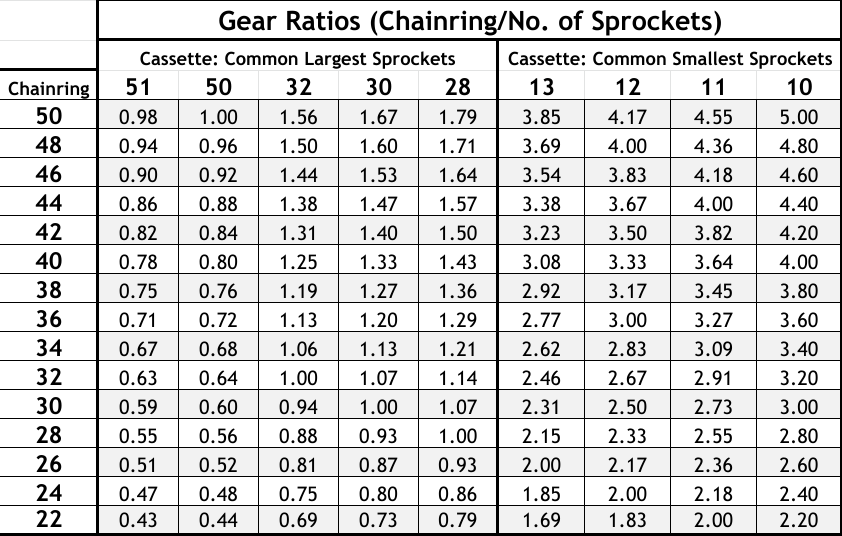 A number of observations can be made:

(2) Neither is the largest gear ratio as a percentage of the smallest gear ratio. On a 1x drivetrain, that percentage will always be simply the biggest chainring as a percentage of the smallest (because the chainring is always the same, the equation simplifies to largest sprocket/smallest sprocket, as a %). On a 10-51 cassette, that percentage will always be 510% (=51/10), regardless of chainring. (The rounding to two decimal places in the table slightly blurs that, but you can check for yourself with the full figures.) Should this percentage figure help us choose one drivetrain over another? On its own, no. It doesn’t tell us whether the gear ratios in question are, actually, useful ones for the bike in question. It doesn’t tell us whether the chainring is too large, too small, or about right. On its own, it’s a bit useless. However, in comparison with a drivetrain that has, say, a 480% range and the same, useful, chainring, yes, it does tell us something worth knowing. In other words, figures out of context can deceive as easily as inform—as politicians and marketing folk well know—but, in context, they might help.

Wheel Sizes and Gear Inches
The above is all very well but it does not factor in different wheel sizes. Why does that matter? Because larger wheel sizes magnify the differences in gear ratios into larger differences in gear inches. In fact, it’s possible to have a smaller spread of gear ratios on a 29er than a 26er, but still have a wider range of speeds on the 29er at any given cadence. This applies regardless of whether the drivetrain is 1x or 3x.

The table below shows wheel circumferences, assuming that pi is 3.14 and wheels, fitted with tyres, really are 29”, 27.5” and 26”. However, in practice, tyre deformation affects rolling circumference.

Now, if this information is combined with the table of gear ratios, we can get the following three tables of gear inches: 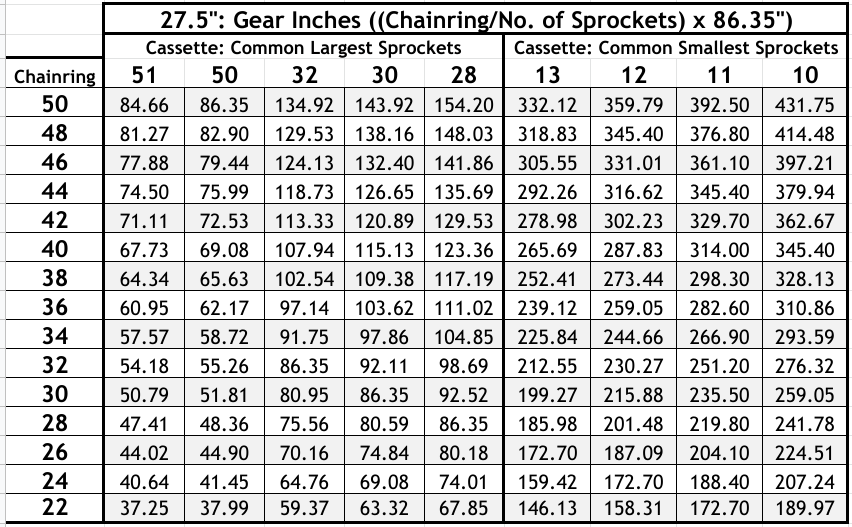 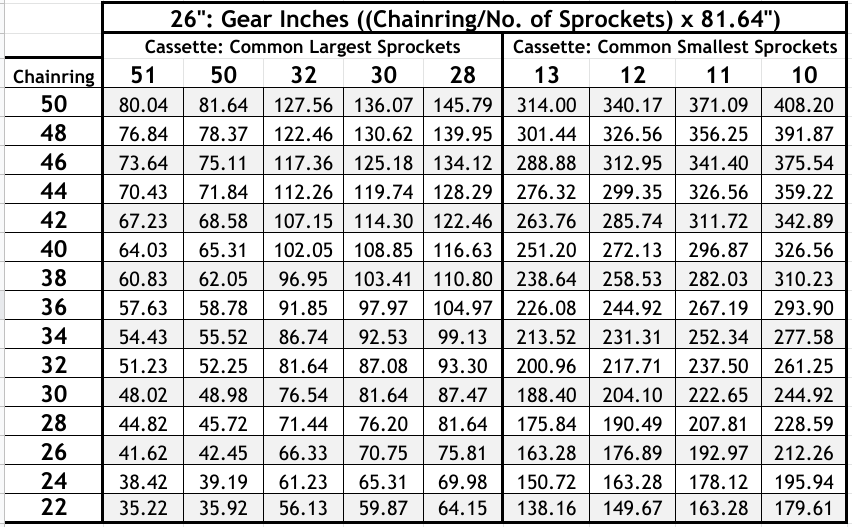 On the other hand, my 1996 Stinson, with 42-32-22 and 11-32 has a high that’s the same as the DSX2’s (with 42t chainring) but a low of 62.60”. For the range of gear inches alone, neither the DSX2 nor the modern 1x 29er MTB can quite compete, although they might have other benefits, like disc brakes. There is also an issue of whether a rider really needs such a wide spread of gear inches and that very much depends on the rider and the terrain. In a flatter area, 1x would probably be adequate, for me anyway. However, I live in an area where I am often going up and down short but steep hills. I use the full range of my gears. Moreover, I am often changing quickly from low down the gears to high up, and vice versa, and the ability to shift chainrings makes that easier.

Again, then, and at the risk of stating the obvious, the figures can help but only in context, and although there might be a best for me and a best for you, there is no best without qualification.

Top Speed and Spinning Out
If you know the speed you reach, in MPH, as you start to spin out, you can work out the cadence (in RPM) using the following:

Alternatively, if you know the cadence at which you spin out, you can work out the speed, in MPH, using the following:

As a non-elite, middle-aged cyclist, riding for fun and fitness, I will spin out at a cadence of around 90-100 rpm and, frankly, I couldn’t sustain that for long. On my 26” daily rider, those cadences give a speed of between 26.57 MPH and 29.52 MP. If I reach higher speeds, that’s due to the assistance of gravity. On the DSX2 (or my Stinson) those cadences would generate speeds between 32.63 MPH and 36.25 MPH. On a 29er with a 1x drivetrain, a 32t chainring, and a 10-51 cassette, I would be spinning out at speeds between 24.83 MPH and 27.59 MPH. However, once gravity takes over, the benefits of the 29er’s momentum and ability to rollover small objects will probably make the 29er the quicker bike. Indeed, evidence suggests that 29ers are faster for modern mountain biking purposes; however, if they are, that is likely to be due to factors other than their range of gear ratios.

Obviously, although top speed contributes to average (mean) speed, it is higher average speeds that get riders from A to B faster. For that reason, sprockets in the middle of the cluster that enable incremental improvements in modal speed (most common speed) might be more important for average (mean) speed than the sheer range of gears.

Conclusion
So, 1x vs 3x? There are no bragging rights or sneering rights, and the game of one upmanship is a fool’s errand.

Thank you for taking the time to give us this fantastic write up. I once owned a giant 29er but only for a short period before swapping it for something retro. I didn't really get to appreciate the difference between 1x and 3x.

compromise, getter a better gear to gear with a closer rear end.
Keep a higher top end for the road/ get to places speed for cruising, put a large ring on it at the front.
Keep that lower bottom end gearing (with better gear to gear steps) and stick a smaller ring on the front for when you get there in the steep gravel and moors underfoot.

The future is 2x 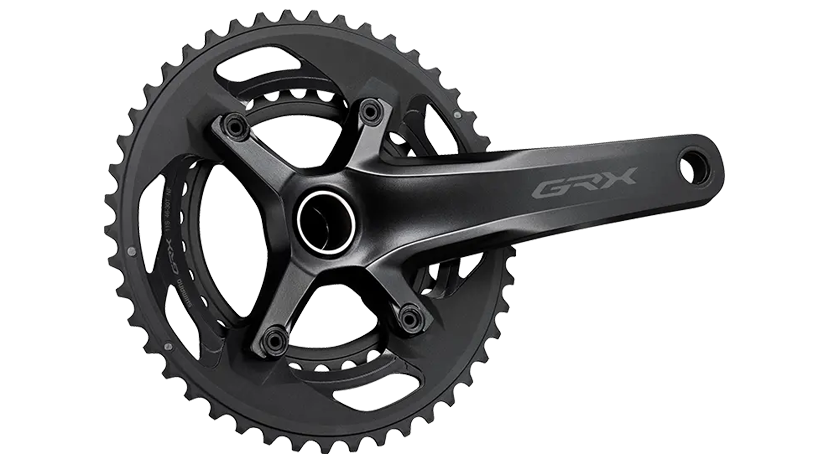 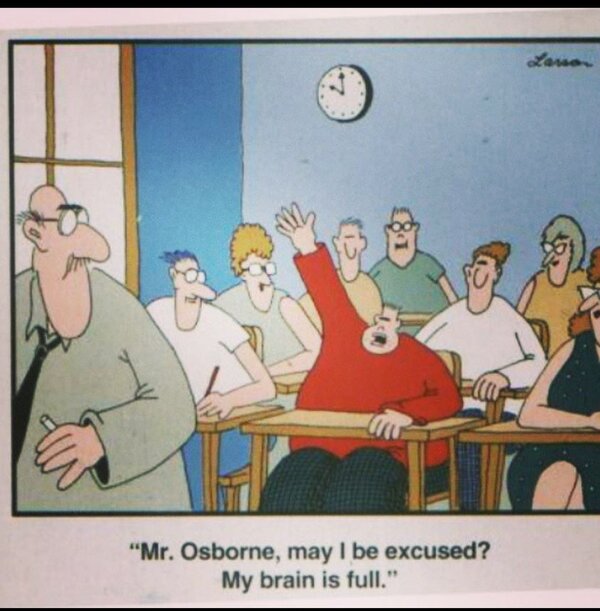 The words time, much, spare and too spring to mind

Going to take a bit of reading but thanks, i think

Don't buy a bike with one.

That seems a lot simpler than resorting to mathematics.

Interesting thoughts. Tyre size is probably more informative than wheel size, but obviously that adds too many potential values for the variable.

mk one said:
The words time, much, spare and too spring to mind

Going to take a bit of reading but thanks, i think
Click to expand...

Laid low with a cold for a couple of days over a bank holiday weekend. So, yeah, too much time to fill.

Finally feel up to going out for a ride this afternoon.

Fat Chance Fan
I don't have a modern bike to see how 1x works as a complete package on a modern bike. My newest bike is probably a 2000 model year. I've tried out 1x a couple times. There are pro's and con's. The gear ratios aren't the major issue. I have more chain drops with 1x. Also a derailleur hanger extender or a modern clutch type derailleur is needed for the larger gearing on the cassette. This places the bottom pully on the derailleur closer to the ground. Probably not a big issue on a 29er but on a 26 inch wheel it makes a difference when going over technical terrane. I broke the the derailleur hanger off of my Santa Cruz Heckler due to this issue. On the other hand I do like the clean looks and simplicity of 1x. A chain guide on the crank will stop chain drops but doesn't look as clean. I would be interested in trying a modern bike with a 1x but I really don't have a problem with my 3x. It might be fixing a problem that doesn't exist.
You must log in or register to reply here.