After having missed out on a couple of Hei Hei's over the last couple of years when this frame popped up on Facebook I tried my best to buy it, the frame had a loose sale agreed but I was second in line if the original deal didn't come to fruition. The previous owner is a member here and was patient/tolerant of my persistence in wanting to buy the frame, the original deal then when quiet and I agreed to buy the frame as a package deal with another very rare Kona frame (more on that in another thread soon) on the basis that I would collect.

I live on the south coast and the frames were in Swansea so a touch under a 400 mile round trip was planned asap, I collected the frames along with a set of Gen 1 Mavic crossmax's, couple of TB P2's and an RS3 chainset.

I had hoped this would be a 97/98 Hei Hei but after consulting Pip he confirmed this frame to be a 99 and told me not to worry on the year as the geometry and cable stop arrangement are the same as late 97/98 models. I cannot thank Pip enough for all of his help & advice, he has been incredibly accommodating of my questions and his knowledge is unparalled, he really has help me get this project off the ground not only for the history of the frame but also advice on restoring/renewing the finish,( thanks Pip I really appreciate it).

The frame was overall in great condition straight with no dents, chain suck or heavy scratch's... main offenders being oxidation on the bottle cage boss', residue and marking from where the head tube was originally painted and the original decals, some marking on the chain stays but otherwise in excellent shape, not a minter but with a little effort would clean up lovely. 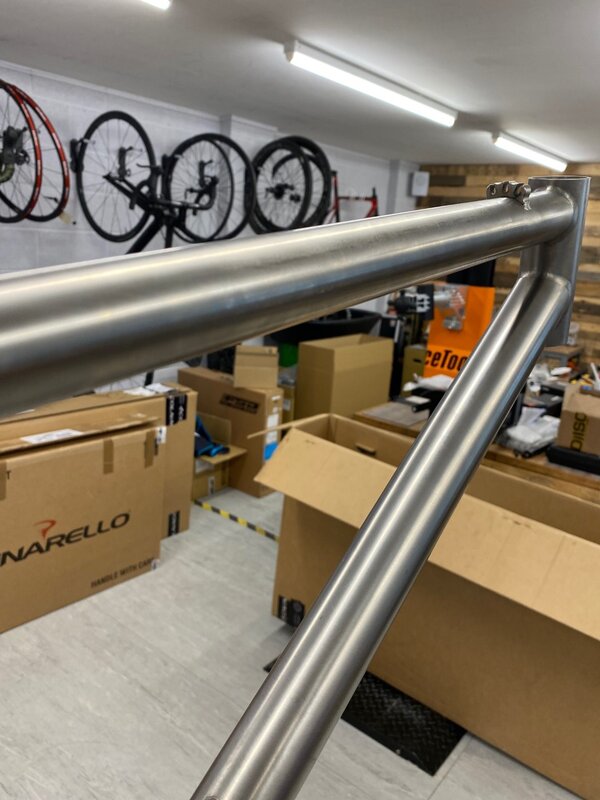 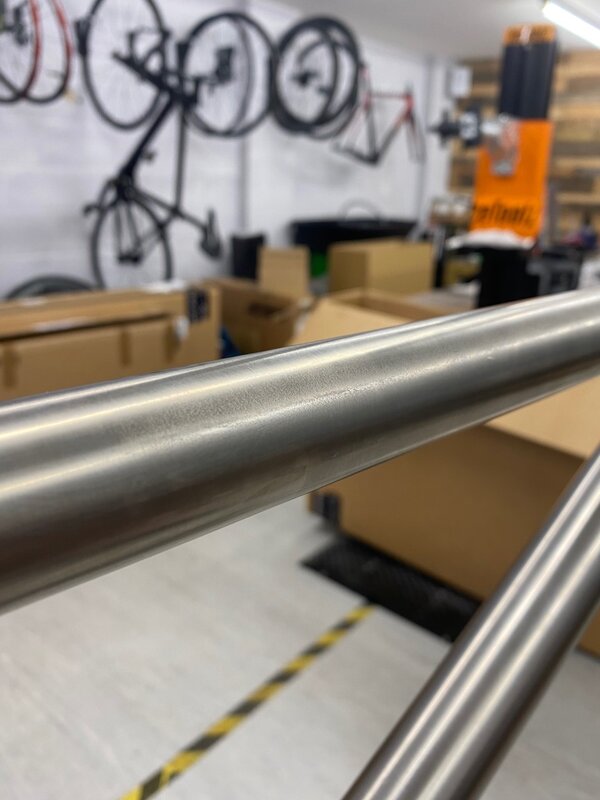 My favourite Kona decals are 96,97,98 so in my mind the plan was to run 98 decals to keep it as close to 'period correct', turns out Steven (original owner) had a similar vision and had previously bought the decals from Gil and never fitted them so this was a bonus I wasn't expecting when I collected the frame. i'm hoping the decals have survived in their original packaging over the years but if not I will replace with a fresh set from Gil. 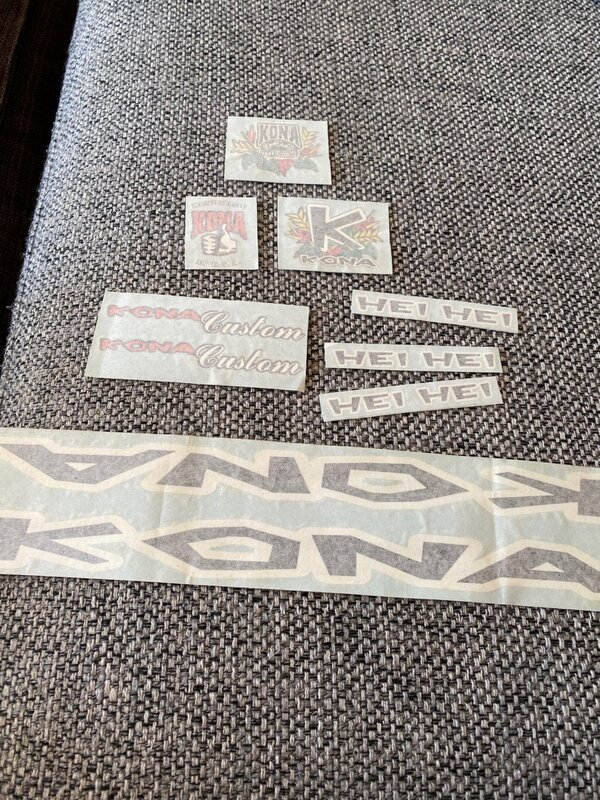 if you are still with me then onto the start of the project:

I like the brushed finish on Litespeed's current frames and given the finish was in good shape but needing a light tickle to clean it up I decided on gently brushing the frame by hand using 3m scotch brite pads, again Pip's advice pointing me in the right direction by brushing along the length of each tube as opposed to around the circumference of the tube. The residue & marking left on the top tube was quickly remedied as with the bottle cage boss's and overall finish on the frame. To the naked eye the frame is slightly lighter in appearance now but overall im happy enough with the finish to start fitting the decals, looking at other 99 Hei Hei'si think they had a brighter finish but will stand corrected if that's not the case. I will build the frame as is for now and if im still not 100% with the finish will address this at a later date. I have chased the bb threads and bottle cage boss so can fire into the build once the decals are on. 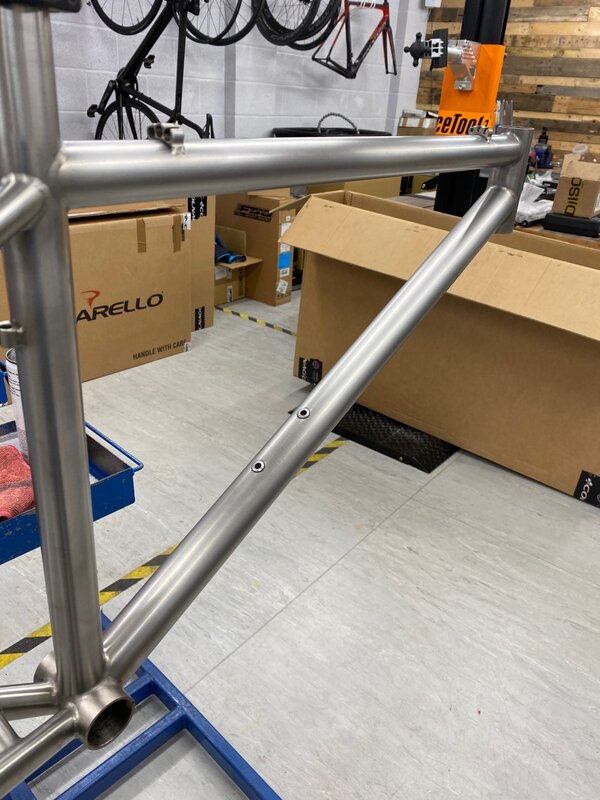 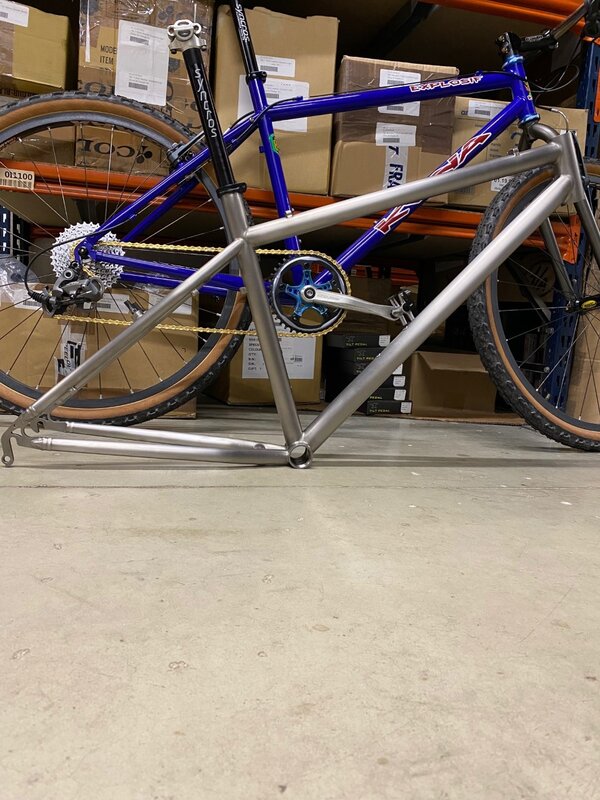 its handy the workshop are accommodating of my hobbies!

Good luck with this. Will be following for sure.

small update as have fired into getting the decals fitted and am almost finished.. Its looking better for the decals 100%. Testament to how good the decals are that Gil produces as these were a good few years old and have gone on perfectly... 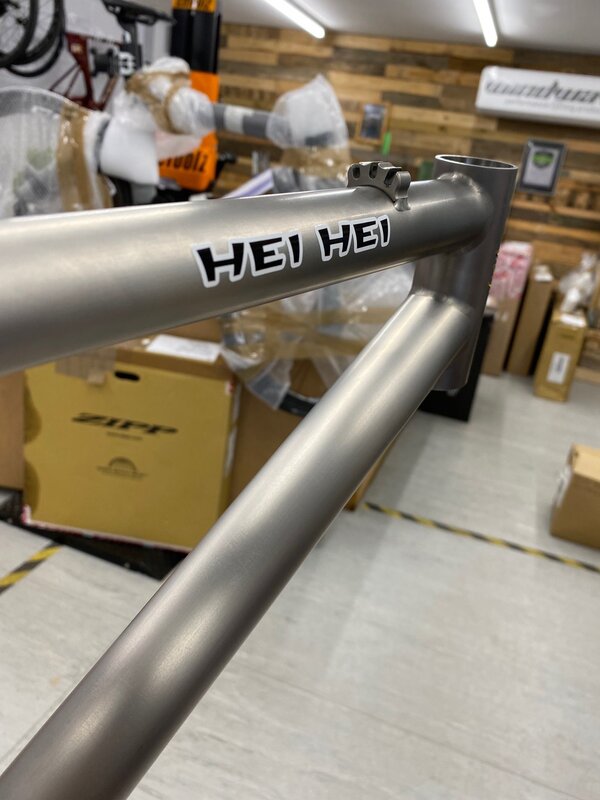 just the downtube decals to go.. the ones m least looking forward to!

I echo how good Gils decals are.
P

I echo how good Gils decals are.
Click to expand...

dt decals are on as is a homage to RB...

not completely happy with my placement of the 'Kona' decals as they are sitting to high on the DT however it will do for now... 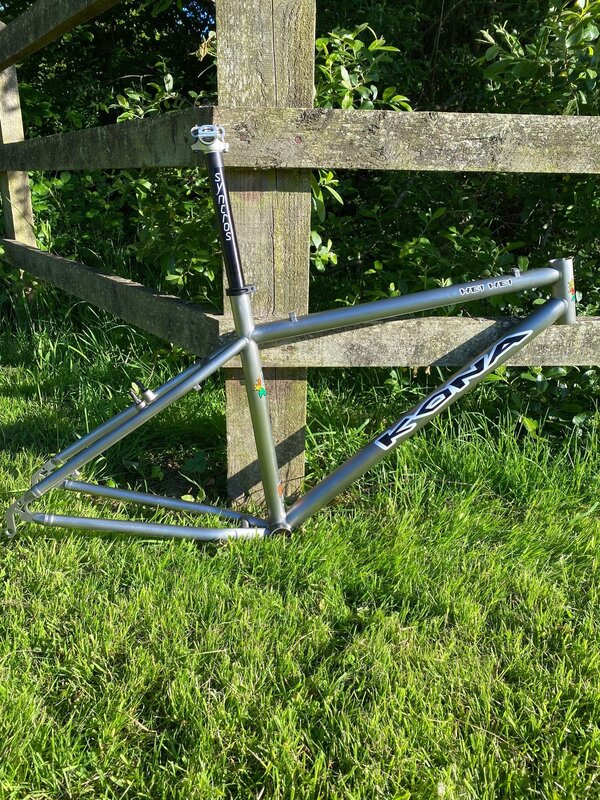 that's enough for today, off for a spin on the Explosif..

ive spent so long over the last couple of days looking at factory fitted decals my eyes are hurting! thanks for the kind words
You must log in or register to reply here.