Never been one for taking many pics of my bikes so I've had to dig into old disc drives.
Bit of history: I left the bike trade (and racing) in the mid-late 1980s but hung on to my 'best' bike, a Colnago. I had it in my mind that it was a Mexico but digging through the 'net suggests that it was more likely to have been a Super Profil. I would ride it from time to time, more so after I got divorced. Then one evening in 1999 the bike was totaled, I spent a week in intensive care and then bought a load of replacement bits - and a helmet. A Master Olympic frame and as most of the stuff on the old bike was either wrecked or old tech, a Record Titanium group set - less the seat pin.
On to what pictures I could find - all two of them!
Back from when the bike was only a few years old and I'd try to get out on a Sunday for a few miles, I'd guess the date to be sometime around 2004: 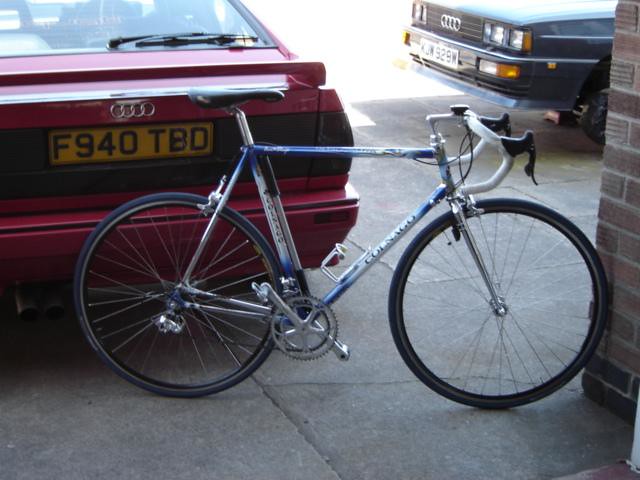 Then life changed (again) and riding bikes was out so it became something of a display in minimalist/single bloke dining room with a promise to myself that I'd ride it again when I retired, pictured here in maybe 2014: 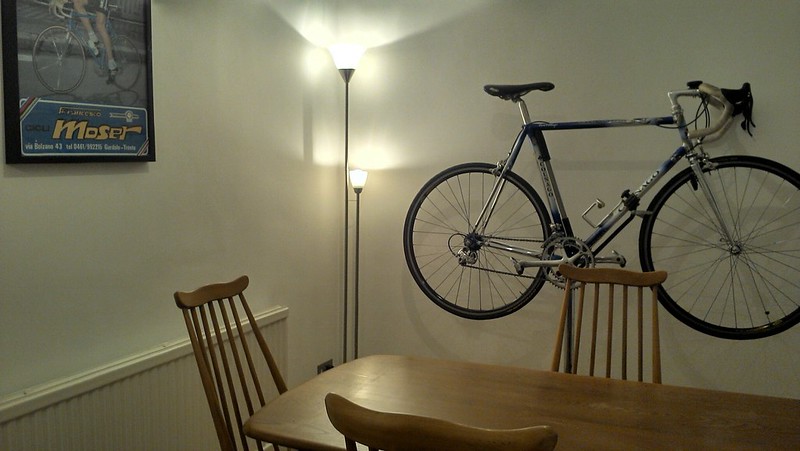 Then come April this year I'd had enough of commuting, high blood pressure and all that, took the plunge and retired.
Thought I'd ride the bike as is for a while then replace/upgrade stuff as required. As these things happen, 6 weeks down the line fate stepped in and towards the end of a 50 mile ride I woke up in an ambulance with minor injuries, a smashed helmet and a good half hour of memory missing. From what I've been able to work out I intended to use a local cycle route and tried taking a dropped kerb which wasn't as dropped as I thought and took the front wheel out from under me. Amazingly, I came off worse than the bike.
Today somebody suggested (again) that the garage could be tidied. Strangely, 'the garage' rapidly became 'your garage' and 'we could' became 'you need to'.....
So the bikes got moved outside for a while meaning that I could steal a few shots - it also means no arty pics with fantastic landscapes I'm afraid. 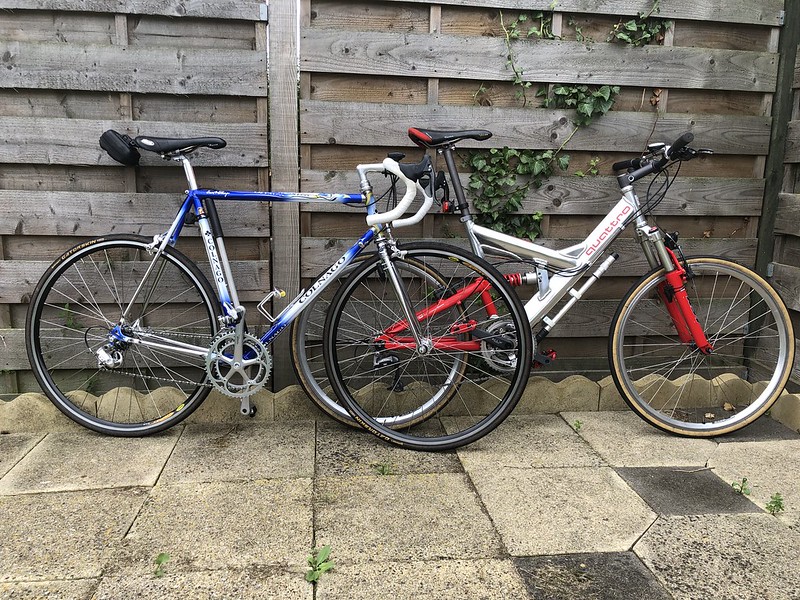 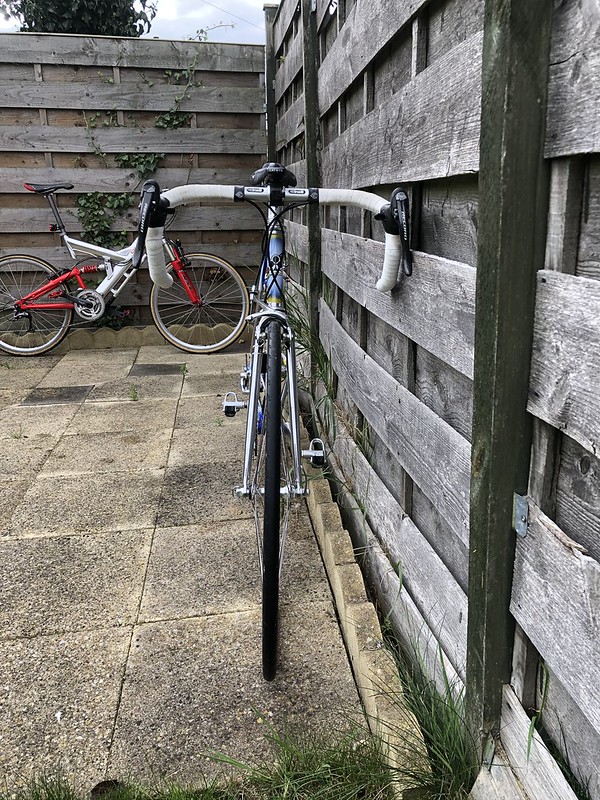 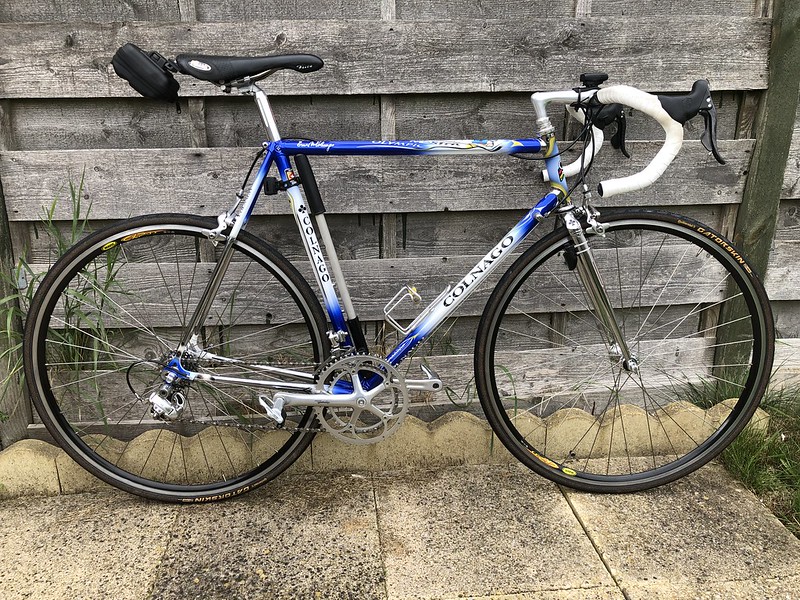 Pretty much all that is different from 2004 is new handlebar tape and the worn chain & cassette have been replaced (as a concession to age and weight, the 12-21 is now a 12-23). Oh, a rear guard light and a bag to hold a spare tube and some tools too.
R

That is a beautiful looking bike!
L

I keep seeing Colnago s in my size... I think it’s a sign
T

It sounds as if you've been through the wars in various ways but it's nice to hear that things seem to have worked out eventually.

Your Colnago is what I consider the classic-looking racing-bike of the late-80s to mid-90's period when designs reached their aesthetic peak.

Also a couple of my favourite cars, the blue one is very early with the twin headlights. Are they yours?
J

They are. Both are currently part way through long term restorations - one of the reasons why I get earache about 'my garage'.
The blue one is one of the first few that were built - it has evidence of factory conversion of the body shell from front wheel to four wheel drive configuration and locking of the differentials is achieved with two large levers mounted on the floor forwards of the hand brake. 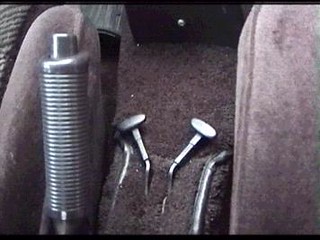 Good stuff with the cars. It's a lot quicker, easier and cheaper to restore and maintain bicycles, though - even Colnagos with Campagnolo Record.

I'll send you a PM about something that you may be interested in.
R

The Bat":3c6c0q3z said:
It sounds as if you've been through the wars in various ways but it's nice to hear that things seem to have worked out eventually.

Your Colnago is what I consider the classic-looking racing-bike of the late-80s to mid-90's period when designs reached their aesthetic peak.

Also a couple of my favourite cars, the blue one is very early with the twin headlights. Are they yours?
Click to expand...

That's oh so true about that time period.

A-ha. Looks like we share similar tastes. I have a 1980 Colnago Super featured earlier on this forum. I am also a VAG fan. Well, 80’s and 90’s anyway. I did have a ‘86 Audi 90 Quattro at one time. It was a very special car, I do miss it. It had the diff locks on the dash iirc. I did have the opportunity to test it’s snow capability once but unfortunately the car coming my way wasn’t showing the level of control I was. Boo hoo.
You must log in or register to reply here.