Retrobike Rider
PoTM Winner
Kona Fan
Picked this up last week, was from a mate on the nova forum who had messaged me about it when he first got it and obviously picked up on the fact that i liked it/was impressed by it (plus he knows i like old skool mtb's)
So i had a text from him on thursday last week asking if i knew anyone that may be interested in buying it as he wanted something newer really!

A few hours later i was at his house handing over some money for it haha, originally it was a purple annodied frame, but its obviously faded over time as its pretty much pink now (lol)

The decals have been removed as they were flaking and battered, but the frame has stayed dark where they were, so refitting replacements wont be too hard (ive already ordered a set from evilbay as i really dont like it without, and ive opted for light blue/black as they should sit nicely on the colour scheme im going for, which will be anno blue)

Here's a couple of pics from when i first picked it up.. 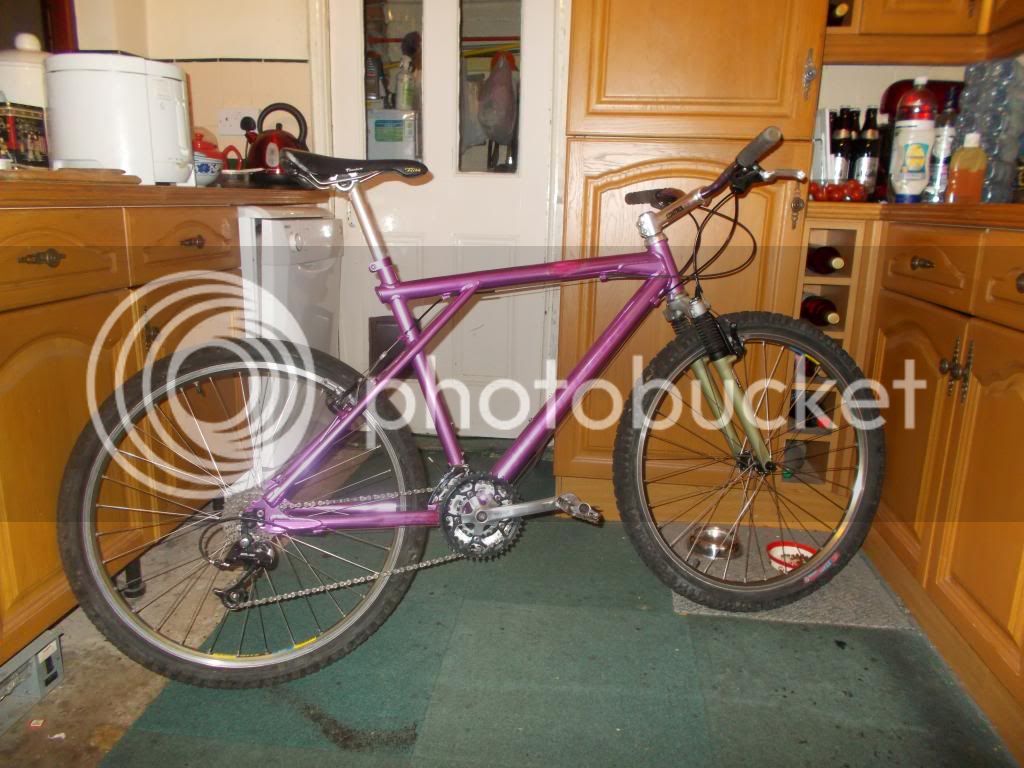 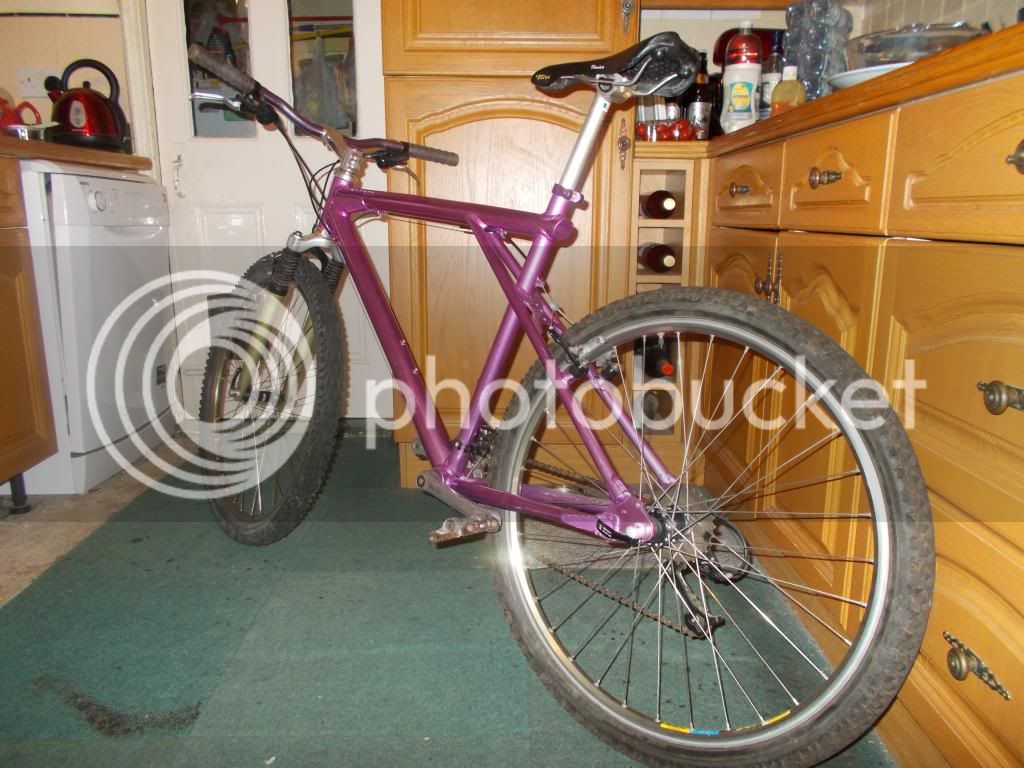 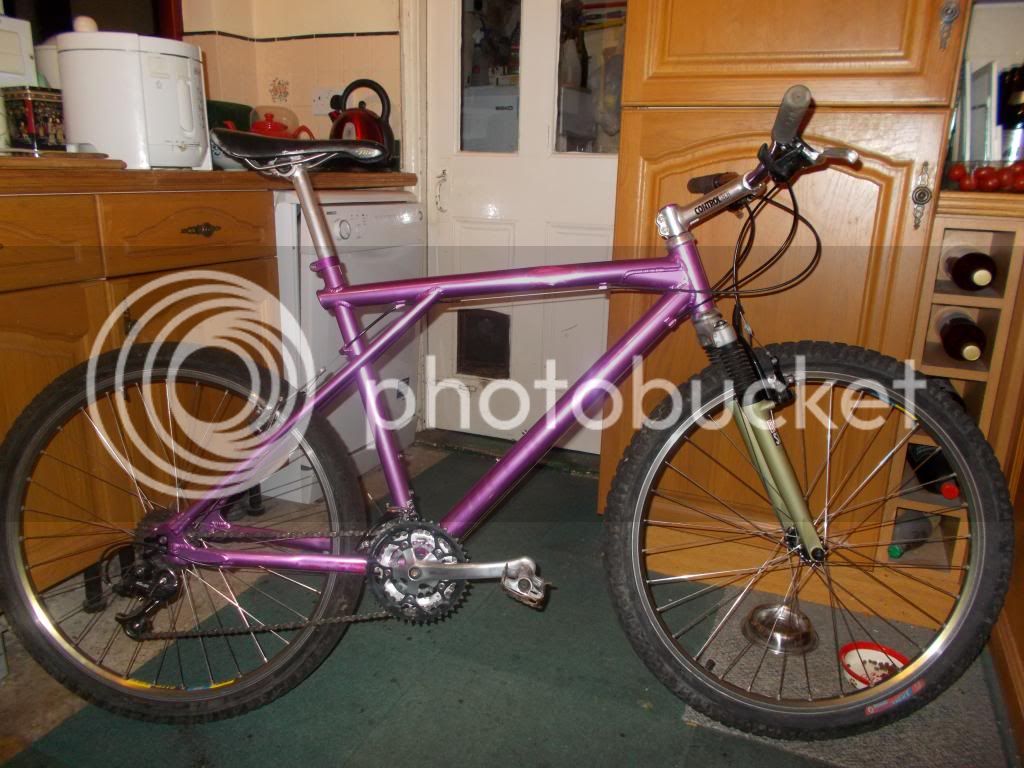 Flat end cap, so it has to be a Zaskar (my mum said lol) 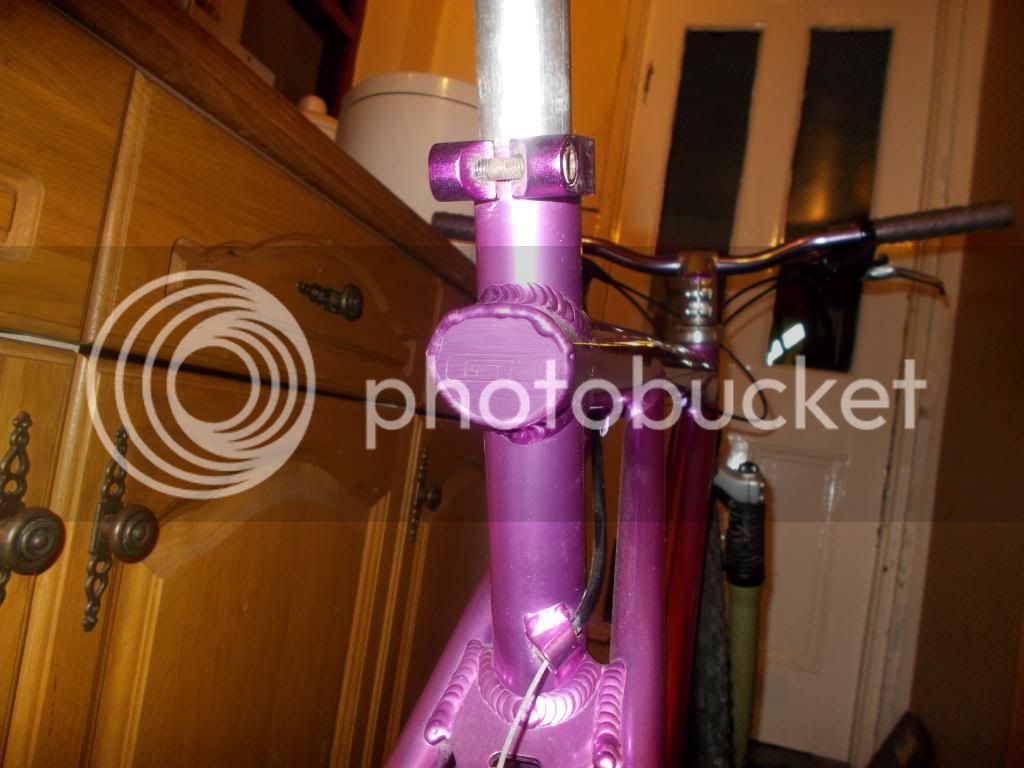 Ive re-cabled it and just swapped the horrible ten ton tyres, for a set of splashbacks and the whole bike is soooo much lighter now!! 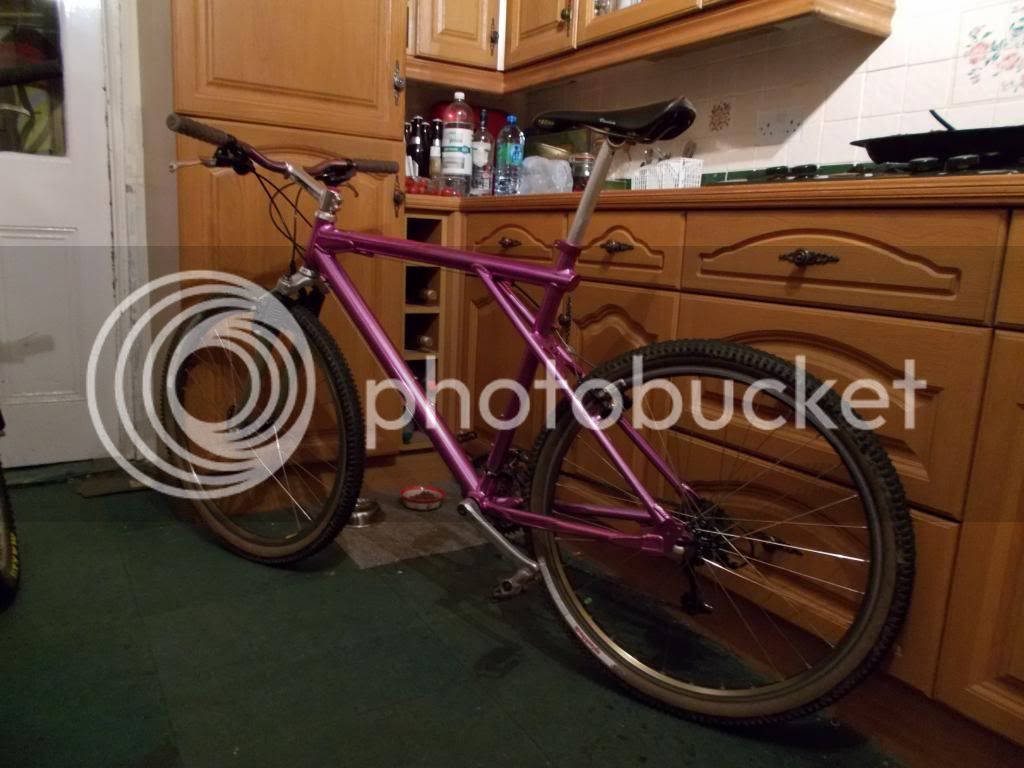 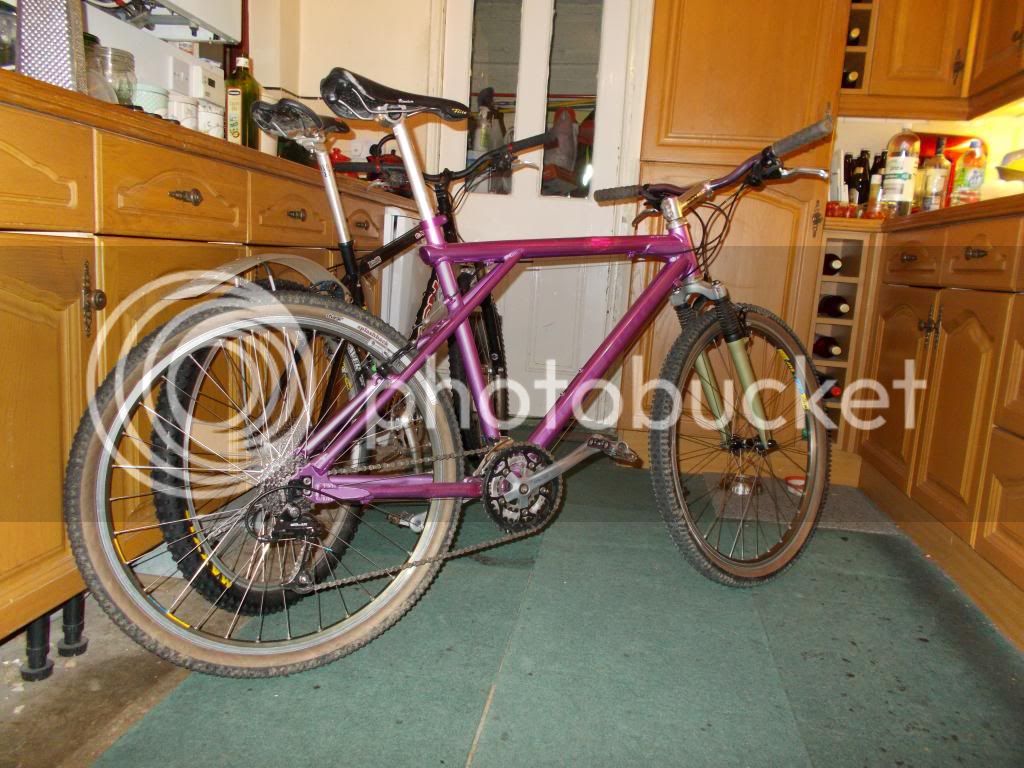 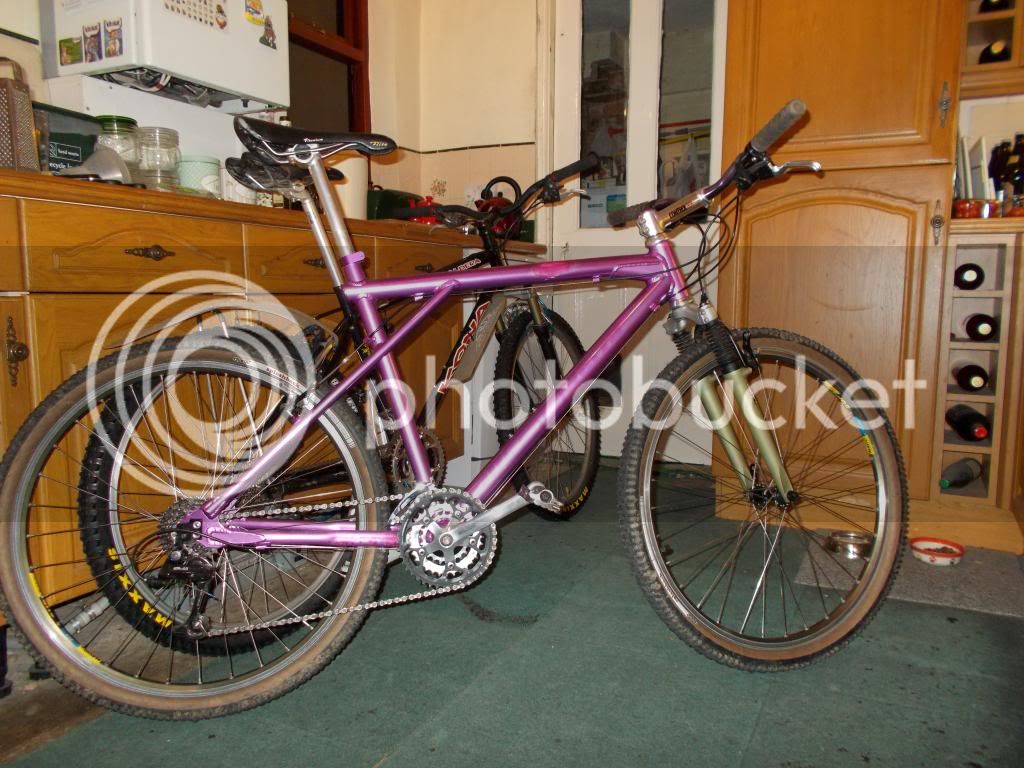 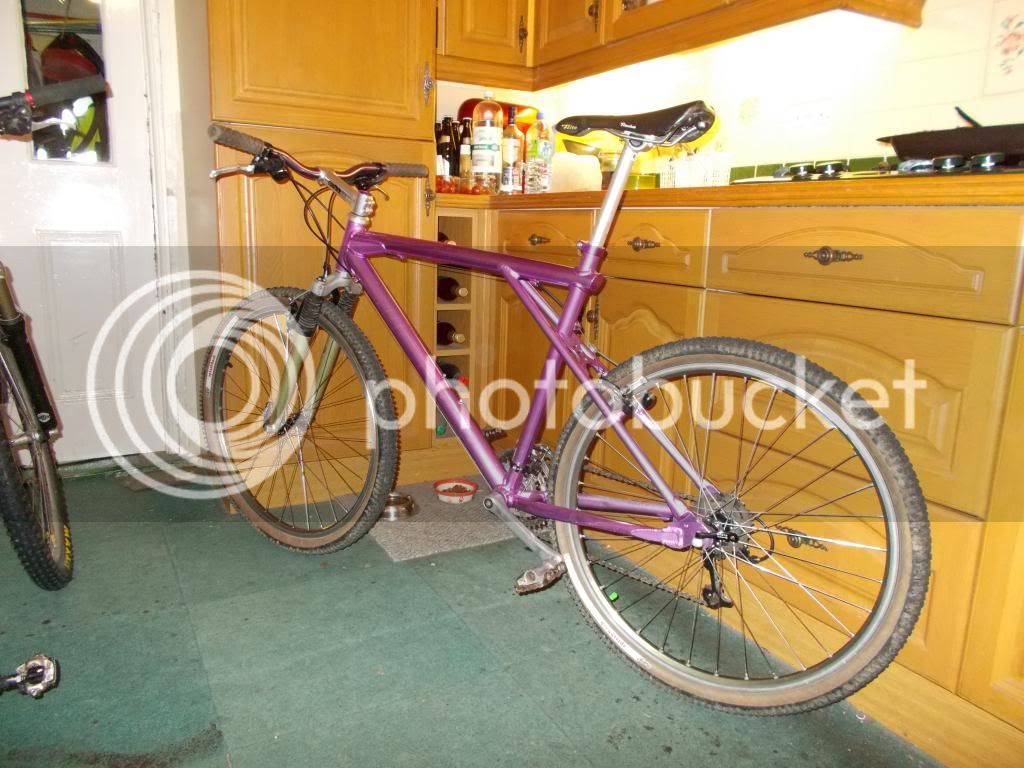 Ive not taken a close up pic of it, but it has had a big ding on the top tube, as the original owner had an off with it, and the bar/shifter hit the tube and dented it :cry:

Its been filled over and painted in a pink laquer to disguise it a touch, most of the 'Zaskar' decal should cover it over, so thats not too bad!

Spec wise, its got full Deore LX, canti's shifters/levers, hubs, mech's and crankset, and its all in really good condition too!

The wheels are silly light so id guess at double butted spokes and it has mavic 217 rims in a kind of grey/yellow flip which looks pretty cool!

Forks are rock shox mag 21's in good order, preload seems to work and theyre nice and smooth, it has anno purple x-lite bars and an fsa headset, control tech stem and seatpost, and the post is topped with a Ti flite!

Had it almost a week now, its all in really good order mechanically, but ive not actually ridden it yet lol!

Playing with the idea of swapping to flat bars, and probably a shorter stem as its about 100 miles long, ill bung some more pics up when i get chance to take it out, and once the decals arrive.

Any comments, advice or tips will be welcomed greatly :mrgreen:

Congratulations! The Zaskar deserves to be made all nice again. Turquoise anodized parts sound good!
S

Maybe do something more unique with it? Id have the dent filled and a repaint.

Would have been purple BITD and it looks kinda tired and wore out. I think new graphics will just emphasise how faded it is

nice one! sounds like your plans are all good to me and its a nice collection of bits. it will look great once you decal it up again

Great to see some love for the anodised Zaskars. I always thought they looked better than the ball burnished.

That is pink. No matter how you may wish to disguise it. Luckily its the in thing in modern bikes too... Well for girls but he rides like one ;-)

Quick one though, Aug 1993 is the date stamp, assuming it was stamped before lunch and it's correct its the early 1994 model then?

Also LE would be frame only? Hence the low level group set?

That is pink. No matter how you may wish to disguise it. Luckily its the in thing in modern bikes too... Well for girls but he rides like one ;-)

Quick one though, Aug 1993 is the date stamp, assuming it was stamped before lunch and it's correct its the early 1994 model then?

Also LE would be frame only? Hence the low level group set?
Click to expand...

Aye its pretty pink in fairness, although Seanstephens has me considering a paintjob now, bugger lol!

I think ill give it the decals ive got coming as theyre not correct anyway i dont think (colour-wise) and actually ride it (as ive still not yet) and then think about what i want to do after i see how i get on with the bike itself.

Have to enquire though Ben, why do you say its low level groupset, its LX, thats two away from XTR, acera-x and alivio, theyre low level
S

Yeah but I'm a bit of a perfectionist at times
You must log in or register to reply here.