Lockdown project number 5.... After spending time last year reopening the "Geoff Ringle's YETI ARC" history books and rebuilding a bike with the parts, "refurbishing" an 2004 Santa Cruz Blur, building a 1991 Yo Eddy and pimping up my old Commencal flame, needed another project to keep sanity... As a titanium lover, wanted to do a "ti project" from scratch... As the happy owner of Indy Fab carbon road bike, and an old fan of Fat Chance, I had tried to buy a Fat Ti from a "well known participant" of this chat but he would only sell it for a lot of money as a complete build.

Patience is a virtue in this space, so decided to wait and see...

Fast forward to October last year, and Star12 is selling a 1994, Serial Number 063T4ML in fantastic condition, with an awesome Titanium BOI style fork and the "basic parts" - see under

Next question is ... how to build it.... as a Ringle fan, and a "1990s early rider", first choice was to go "all blue" and Ti. Problem is they are a few out there, Ringle "Blue" was really the flavour of the year in 1992/1993, and looking at the Mountain Bike Action test, it is clear that 1994/5 was a somewhat pivotal year, with Grip Shift now more mainstream, XTR M900 on all high end bikes ( goodbye Suntour.. ), more "silver and black"... As I buy a Silver Ringle Stem, the choice is made, it will be "silver and black" with "some blue" components - it would have been a crime to change the headset and it matches the stickers perfectly.

Good news is I had a set of wheel from a previous "full bike purchase", 8 speed XTR cassette, Chris king rear hub ( definitely not 1994 but "early and beautiful" ) and Syncros at the front

Now had to find the rest of the build...

Stem : Ringle Zooka Silver - Retrobike post
Handlebar : Ritchey CompLite 1994 from one of my previous bikes...
Shifters : Had to be Grip Shift.... SRT 800, NOS

For the Saddle, when I was racing bike in early 1990s, my team-mate Fabrice B. whose parents were treating like a royalty had the same bike as me but kitted with top spec and one of the part was the Flite Evolution "full carbon". Now that build was the right time for "revenge" and found one on French "gumtree equivalent" for much less than usual and in perfect condition...

The final part of the puzzle was the seat post, and it is hard not to go for Titanium model as the alternative - Ringle Moby in silver to match the Stem per "collar and cuffs" rule - is super hard to find, so rather match the Titanium frame with a Ti Seatpost : Syncros, using shim to get to the "Fat Chance" size


So here it is, as lockdown is over, so is the urge to build old dream bike and can ride them but who knows what comes next ! Love the bike, love the welding and the Ti "lug" around seat tube, and... it rides well... my area is too gnarly to do proper MTB with it but love it on easy trails. 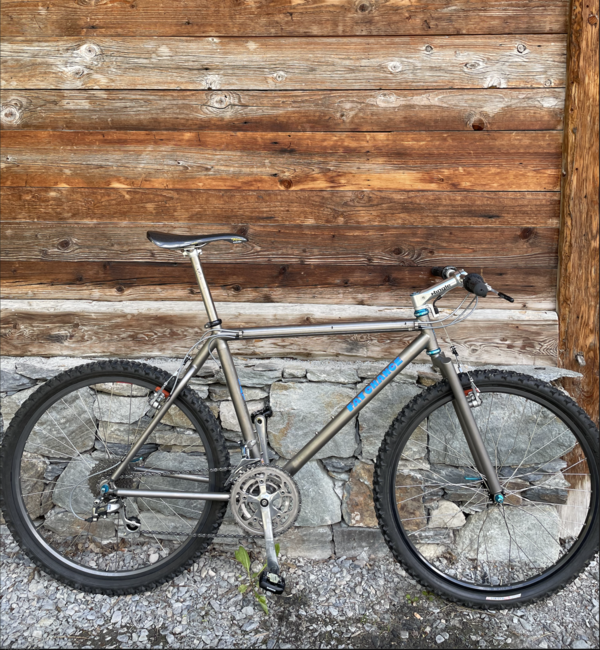 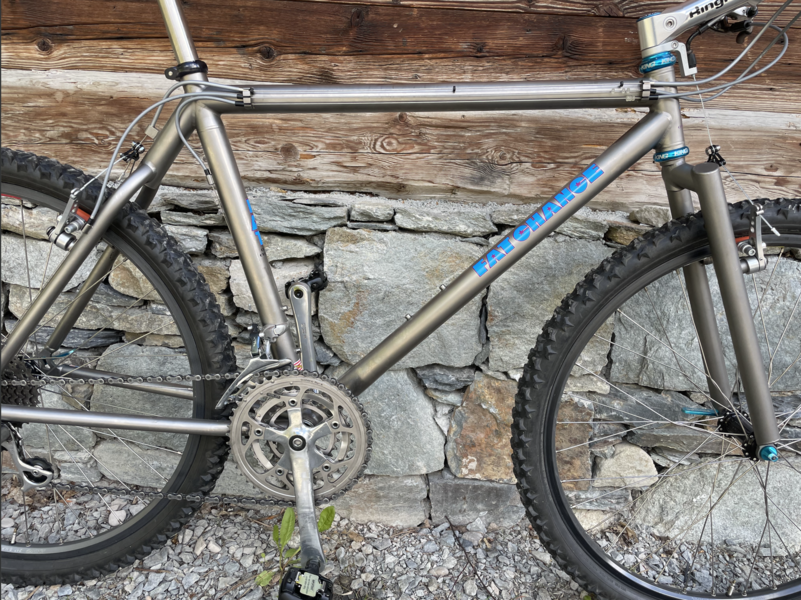 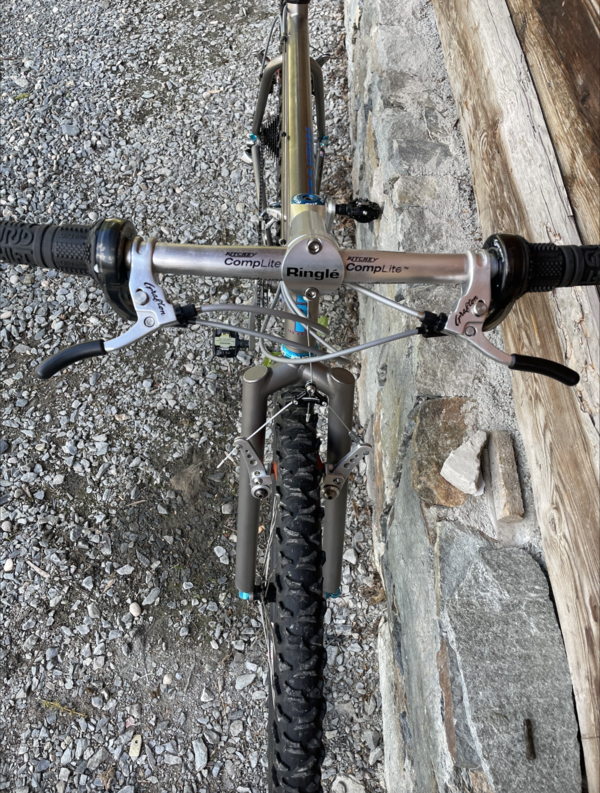 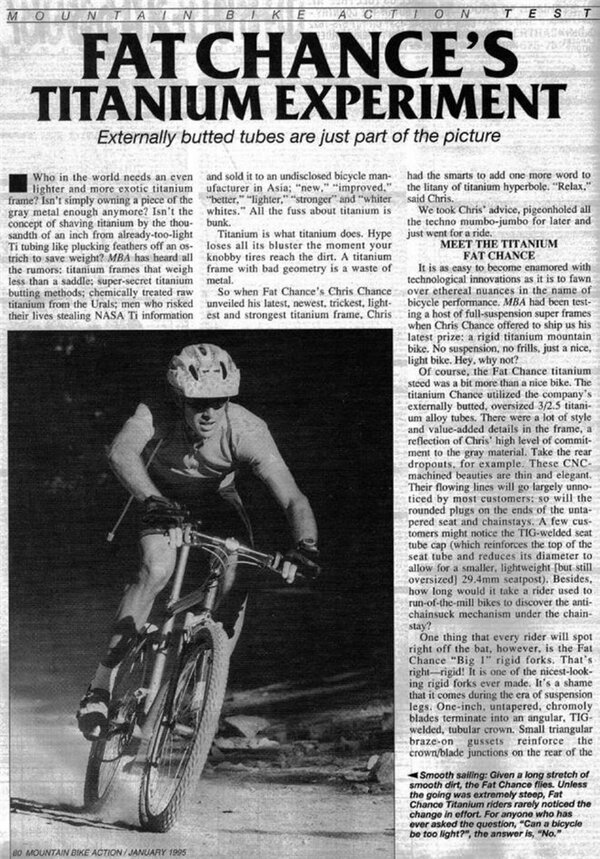 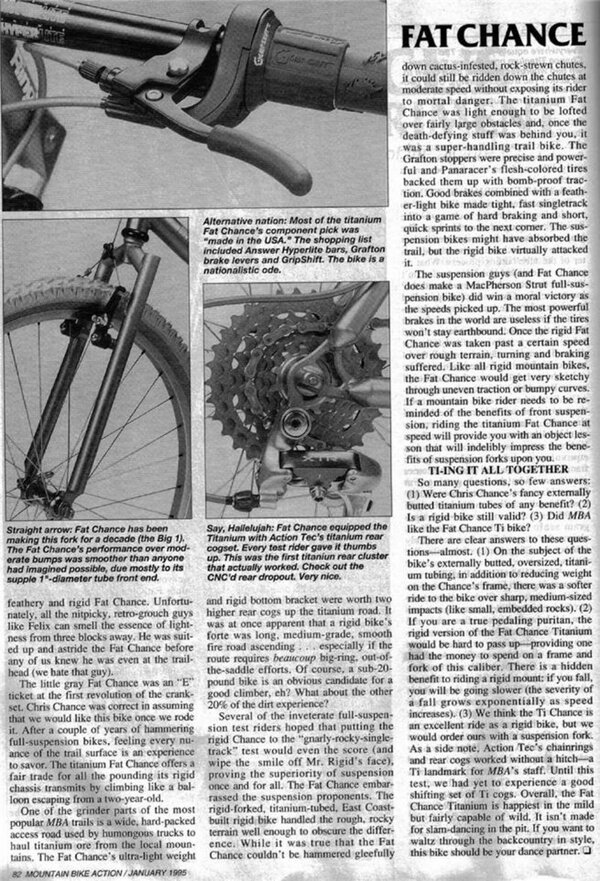 Orange 🍊 Fan
That is a good looking "mountain bike".

Very cool build that, congratulations! I think it looks really clean and well-balanced and I love the spec. Not a fan of snowflake-laced wheels, but other than that it's pretty perfect..! Now get some Ti axles for those pedals

Awesome build!
That was my dream bike when I was a poor college student in the early 90's.
One of the Bike shops in my town carried Fat Chance and Merlins.
The owner of that shop had one just like this. I remember picking it up and being amazed how lite it was.

Your Yo Eddy is sweet too!

The part of my that wants to turn my nose up at the Gripshift Grafton Re-Enty combo, is being put in it's place by the side that loves finding a reference like that in an old mag and running with it!

The pinnacle of rigid Ti rides imo. Nice to read a new mag piece and ride review of it. I have the same bike with an original BOI. Its a work of art and a keeper.
Last edited: May 31, 2021

Interesting that the mag article says they would order one with sus fork. Now everybody wants rigid BOIs. FAT were the first to develop butting on custom spec oversize Ti tubes. All painstakingly and expensively hand done by lathe, hence the high price. Other Ti bikes of this era were plain guage and very flexible under load or when descending at speed. Merlin experimented with chemical butting at the time but were unsuccessful. The 92/93 FAT Ti’s used a BB sleeve and had extra gusseting for strength & stiffness. The 94 Ti is a softer & nicer ride ( i have owned both ) and has prettier welds. IROBOT, FAT’s head Somerville welder says they are his finest works.
Last edited: Jun 1, 2021

Lovely brand. Wonderful workmanship
You must log in or register to reply here.