BITD as 15 years old lad, I got a 1992 Cannondale M700 with which I started the mountain biking hobby. I had lusted for a Cannondale already since 1990 when I got a Nishiki Bushwhacker (Deore LX) but the 'dales were too expensive at that time.
Two years later, I got a summer job from the LBS and got access to net priced bikes & parts. I would have wanted the M2000 that the LBS had but it was still too expensive and the LBS owner declined to order me the M1000 because of his bad experiences with Suntour components (read: freewheels and lack of spare parts). I wanted to have one with the aluminium Pepperoni fork so M700 it was. Back then in my home town, Cannondales with their huge down tubes were the hottest thing since sliced bread, especially when the other prominent marques sold there by other bike shops - Marin & Scott - were mostly steel tubed ones.
Even though I loved Cannondales as a kid, I didn't care too much for them when I started the retro bike collecting hobby in 2006. For me, Kleins were the ultimate retro bikes you could get. After that, my vision has broadened a bit as you might know

The small collector community here in Finland has a Facebook group where we - amongst other stuff - out the retro bikes for sale on local "Craigslist"-like classifieds site. Some months ago there appeared a link of a 1992 Cannondale M2000 for sale. Vintage bikes go usually for very small money around here (most are low-end bikes) and for example 90s Cannondales (mostly M500-M900) cost somewhere between 100-300 EUR usually. Now this was quite a bit more but what got my interest was that in addition to being quite close to me, it appeared to have most of the original parts still in place. As (S)M2000 was my dream bike for some 5 years or so at the beginning of my hobby years and as I knew that there probably wouldn't be too many similar opportunities to get one from a domestic seller, I decided to give it a go.

So I called the seller and he told me that he's the original owner of the bike. He had never ridden with it on forest trails, only on tarmac & gravel. For the last 15 years, the bike had been hanging from his garage ceiling, completely unridden. I went to see the bike and apart from some scratches, it looked fine and we made a deal for it. The seller gave me the original user's manual, receipt, Kryptonite lock (described on receipt) and Cannondale bags + the original (almost unused) Turbo saddle that he luckily had as well.

The seller had gotten the tyres changed to Muddy Fox Griptrax 2.0" wire bead ones with auto valve tubes. His only explanation to this was that he wanted to have auto valves as he didn't want to buy a presta pump but I couldn't get any reasoning for swapping the actual tyres as well. Maybe he wanted to have ones that roll better on tarmac. He also verified that the bike didn't come with bar ends (so no Coda XYZs) as was the case with the bike that the LBS had back in 1992. That early '92 model came with Onza Racing Porc II tyres instead of Ritchey Z-Max by the way... 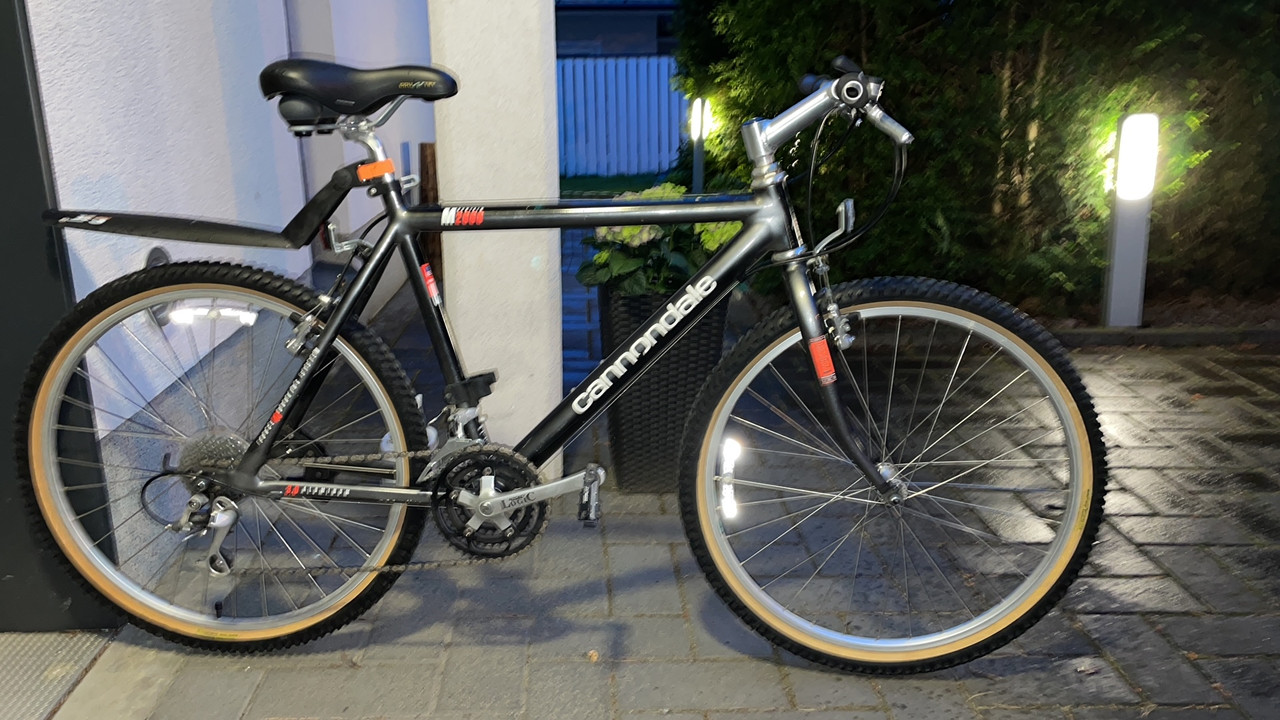 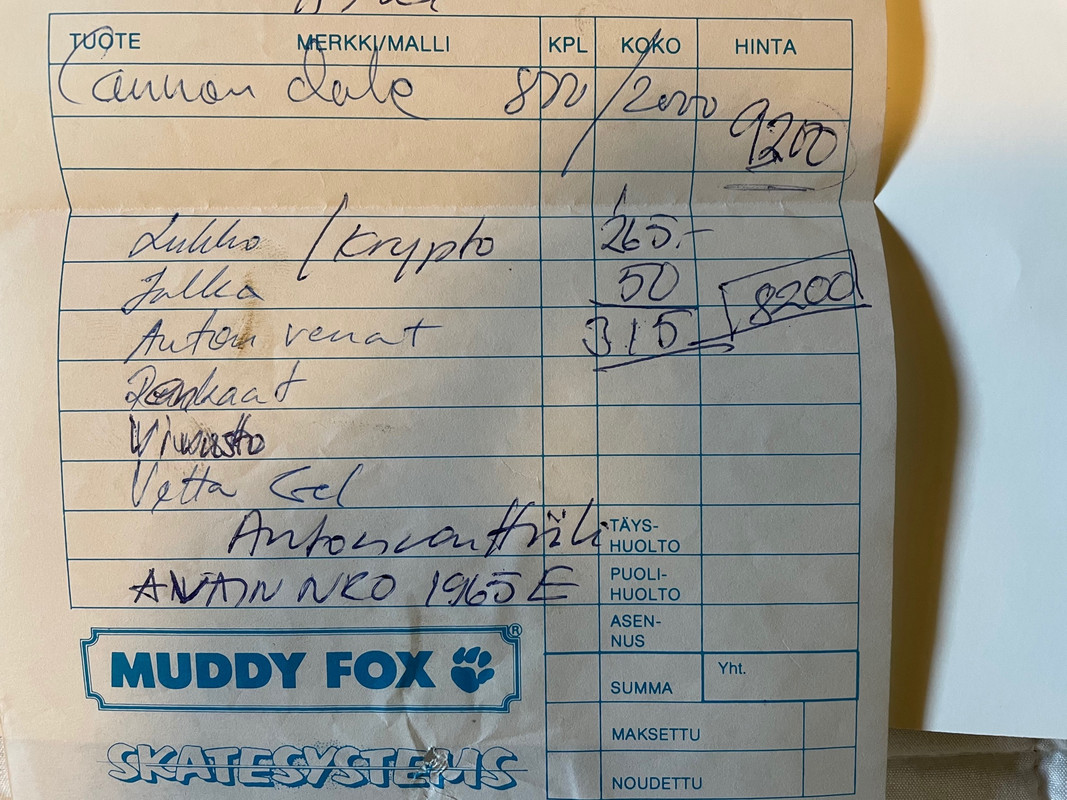 Here's the bike in day light with kickstand removed, Turbo installed but still with original reflectors and "dork disc" in place. There are scratches here and there but nothing bad except for that missing part of "o" in downtube logo (which is a bummer). 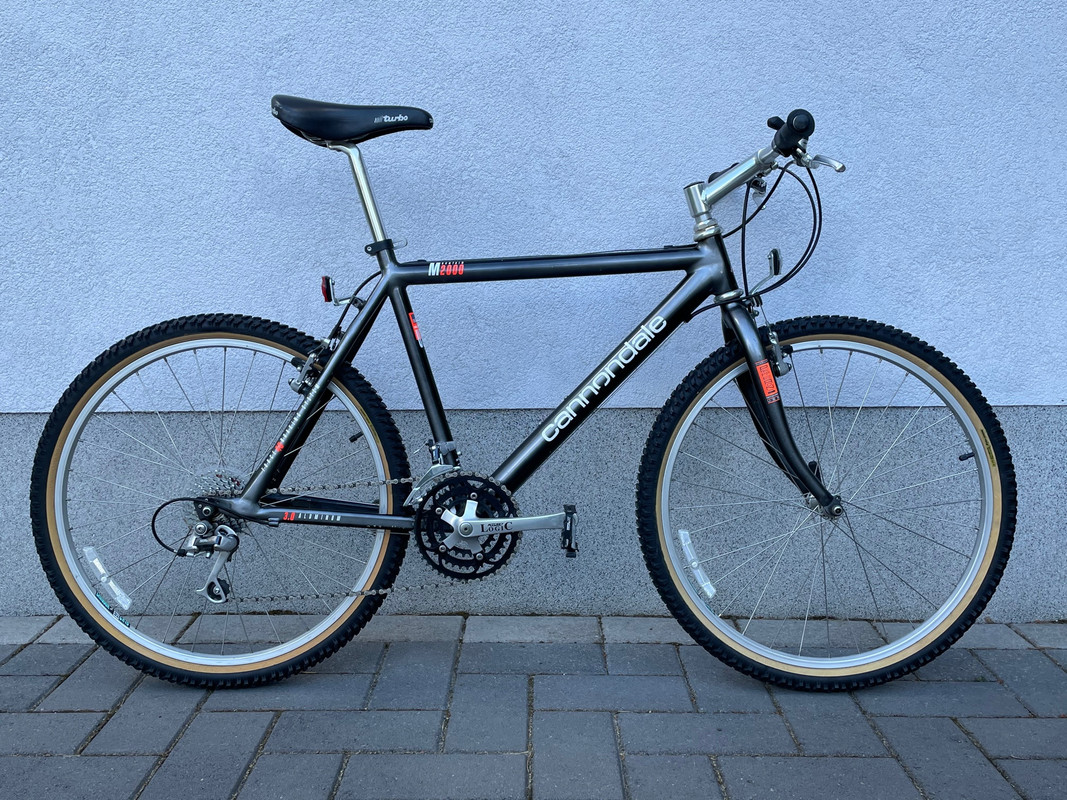 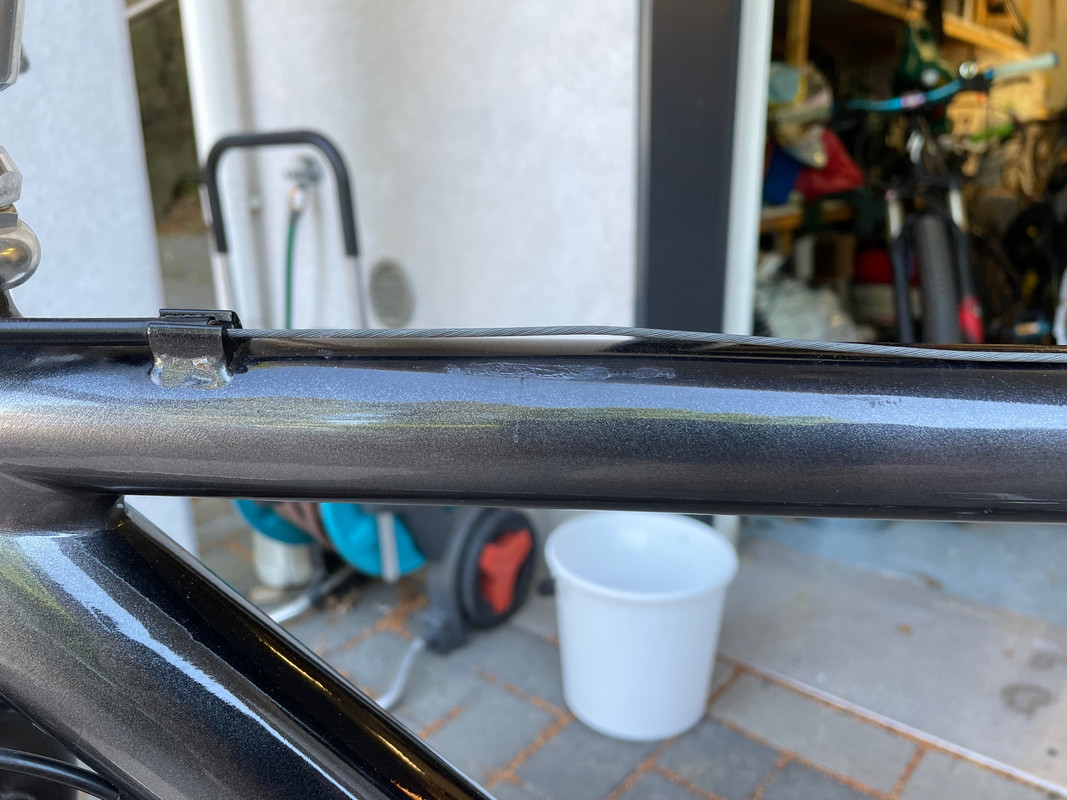 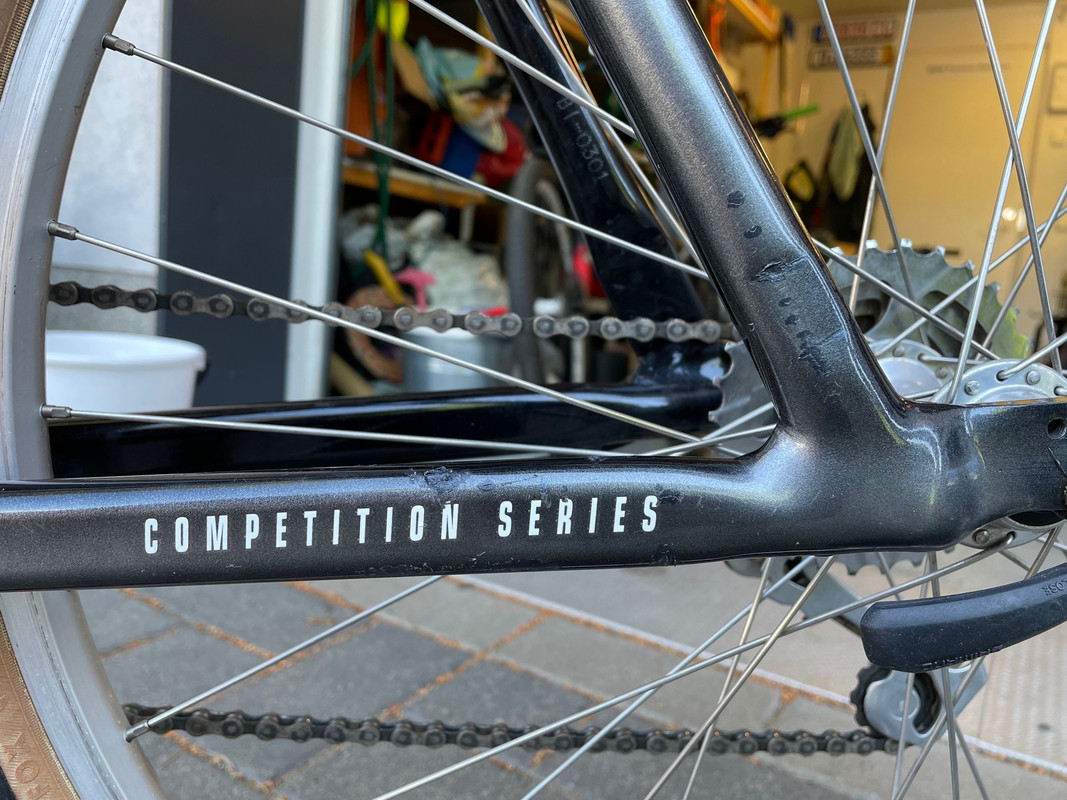 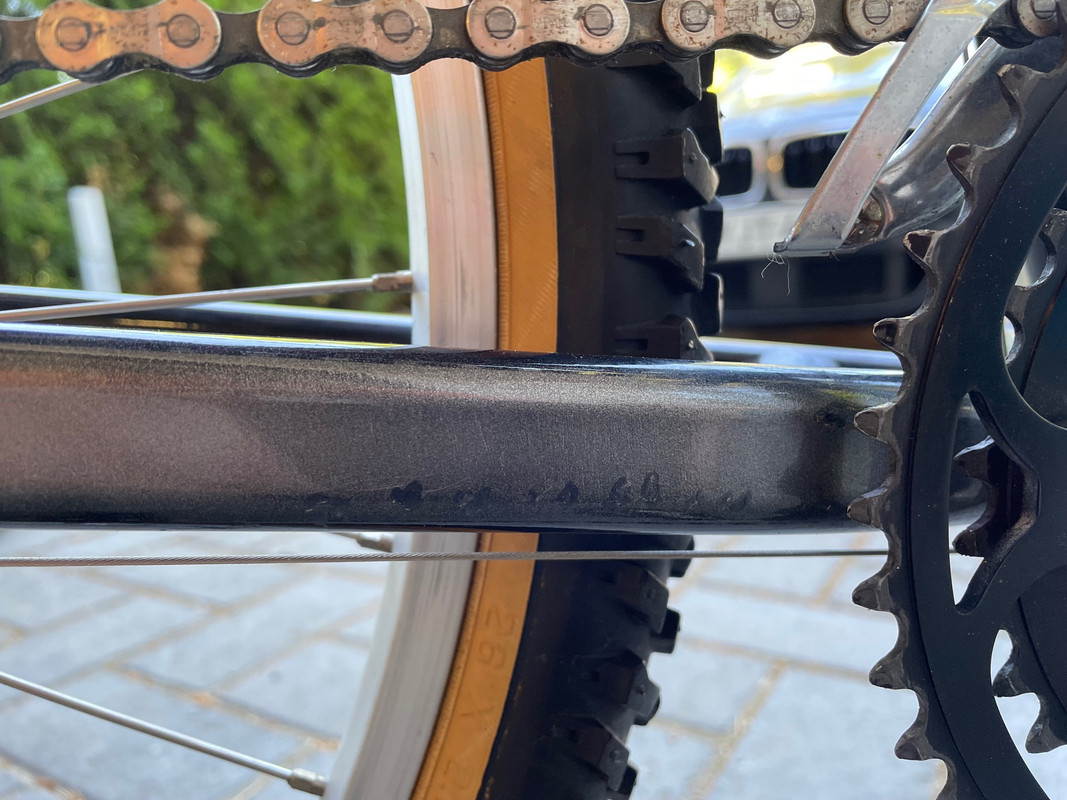 I also swapped the original Tioga Bio-Grip II grips that had become tacky (as they do when the surface starts to wear) for a newer pair in better condition. Those Ritchey brake levers are essentially Dia-Compe SS-7s with a different blade. I've got the SS-7s on my Yo Eddy and I was surprised to find out that the blade form on Ritcheys was much worse feeling than on Dia-Compes. The angle/curve didn't feel as good. 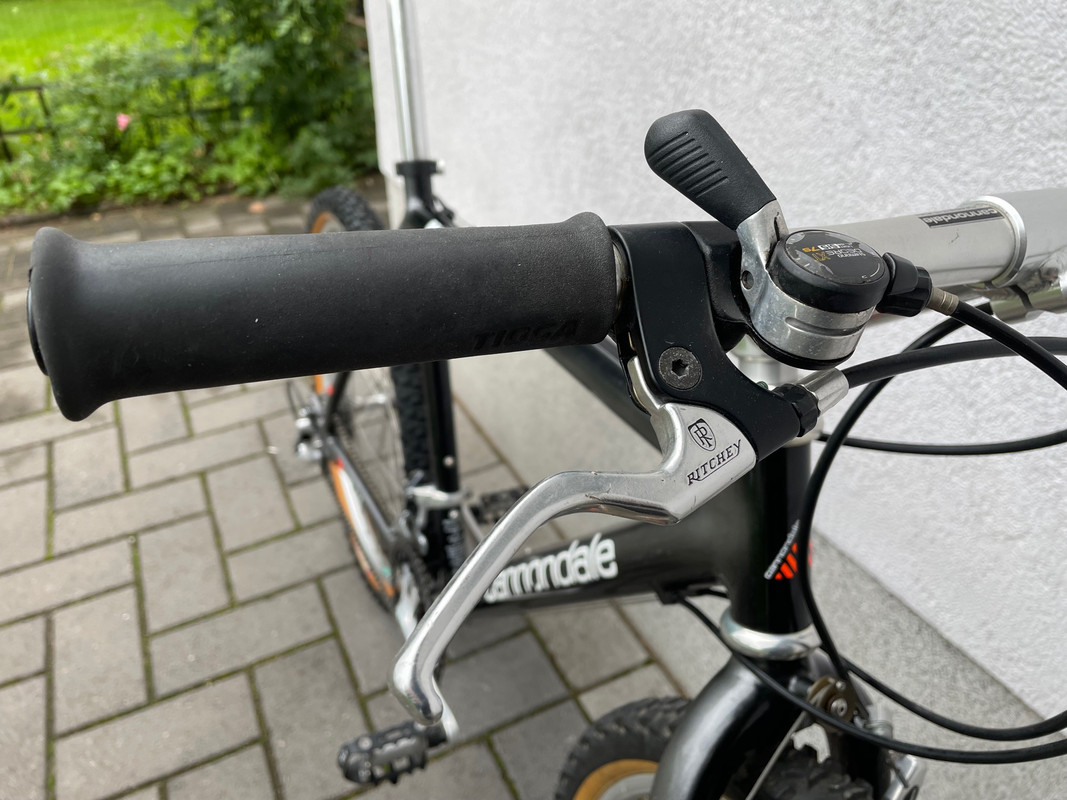 The major thing though was to find a pair of tan-wall Ritchey MegaBite Z-Max kevlar tyres for the bike.
These are nowadays rare as hen's teeth so I was lucky to find two in great condition. The front one is a 'K' version as originally specced on M2000 and the rear one is 'WCS' version. 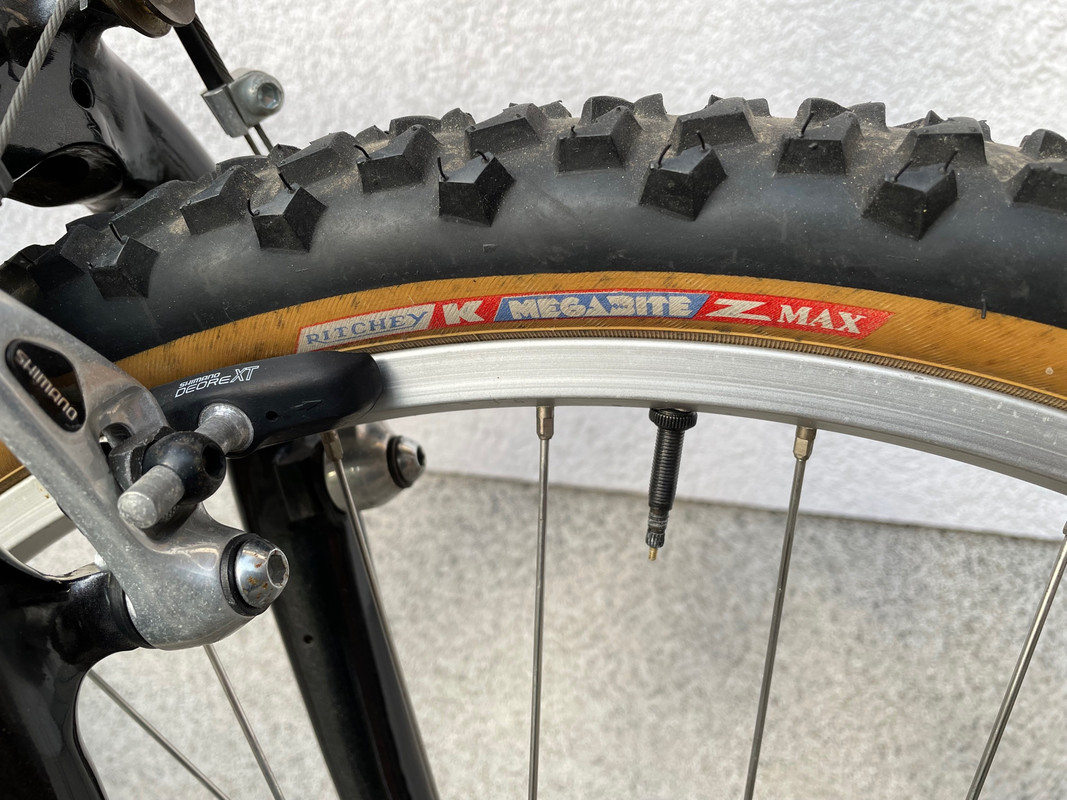 That’s quite a barn find. And it has enough things to do on it to make it a nice challenge. The chainstay tubing is exceptionally thin on those frames. We have a Bad Boy with a nasty ding in one chainstay - far worse than yours, and we keep and eye on it but it hasn’t changed in five years. A shame about the kickstand - a weird thing on an SM2000 but which probably did save the bike from other scratches and dings over time. Is the Cannondale logo O under lacquer on this one? There are quite a few approaches to fixing it - careful painting...layer on layer...enamel...fine brush. Or order a white laser cut copy and just cut the section you need. Or a sheet of adhesive which the laser cut companies use and cut out a small section to ‘let in’ with a scalpel. That’s better than painting since you can adjust it or remove it if you don’t like it.

Right...I am finishing my last coffee, then heading off into the horrible headwind for an 11km ride to work on my ratty Cannondale F6 commuter....

Yeah, the decals are under clear coat on this one. I was thinking of getting a decal from Gil and then cutting the needed section of O for it, but let's see.

Fat Chance Fan
Very nice bike, and always cool to have the receipt! Those kickstands are really the bane of retrobiking. Or more specific: The idiots mounting them. Also I´m with you on the Ritchey levers. I think the angle away from the handlebar made me not like them at all.

Where are you in Finland - From here I do a lot of work on the education system in Finland - just finishing a big report on textbook use in Sweden.....

Dr Dremel said:
Those kickstands are really the bane of retrobiking. Or more specific: The idiots mounting them.
Click to expand...

Yeah, and this hideous thing was installed by the bike shop as new. The mechanic (prob. summer trainee or something) had torqued it so tight that one of the mounting bolts had twisted...

2manyoranges said:
Where are you in Finland - From here I do a lot of work on the education system in Finland - just finishing a big report on textbook use in Sweden.....
Click to expand...

Vantaa - nice. Snow should be with you soon.....?
You must log in or register to reply here.

Yesterday at 22:55
Freddyman90
F
L
Two weeks off work after surgery and boredom made me buy a Kona