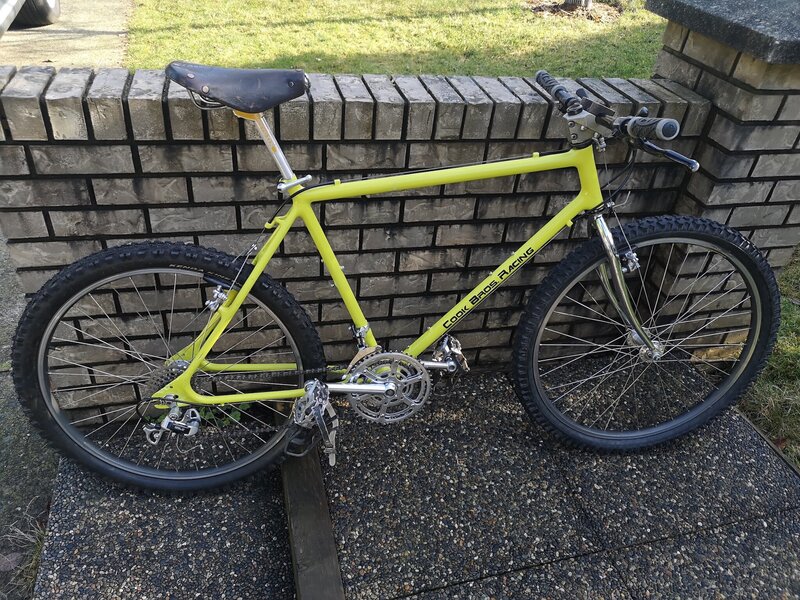 Here is my 40 year old, Custom 1982 Cook Bros. Racing (CBR) very rare straight frame Racing Cruiser (serial # 115) which I have owned since new. It’s by far not a catalog bike or new build, but I did take it all apart and cleaned it up/ polished a few parts before taking these photos. 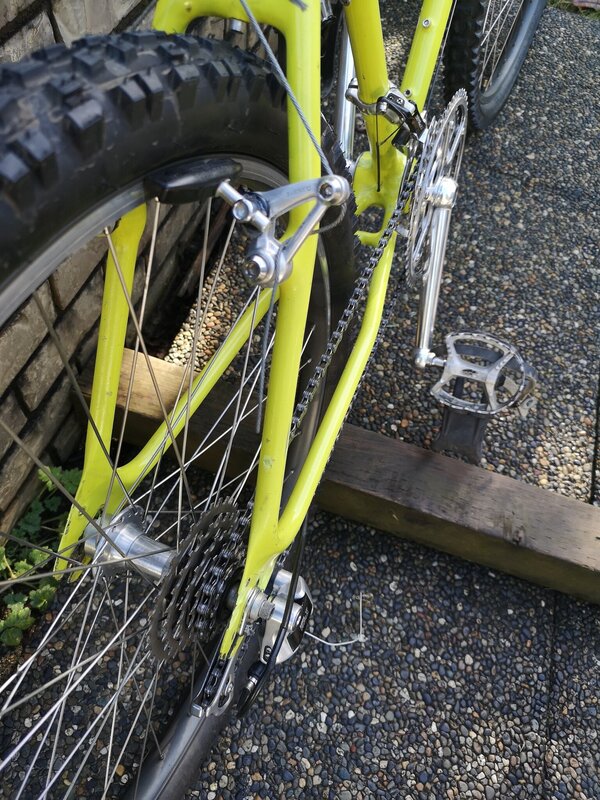 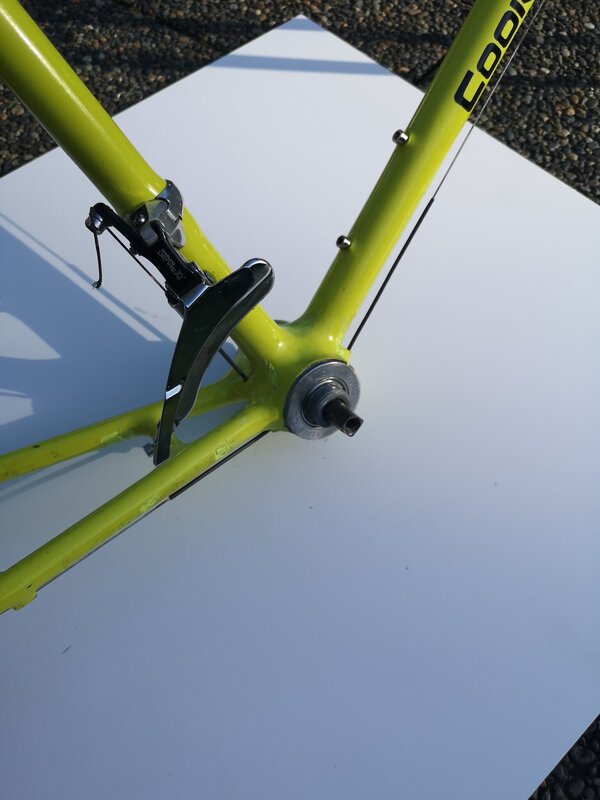 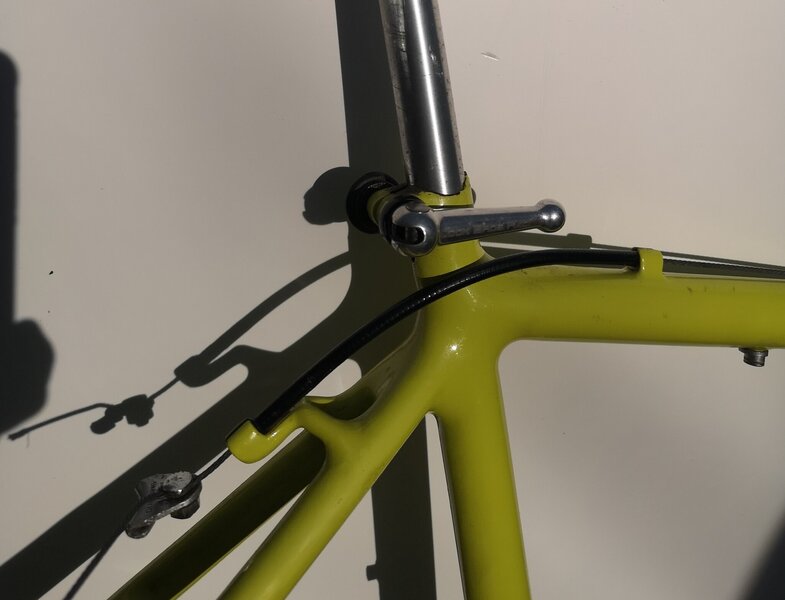 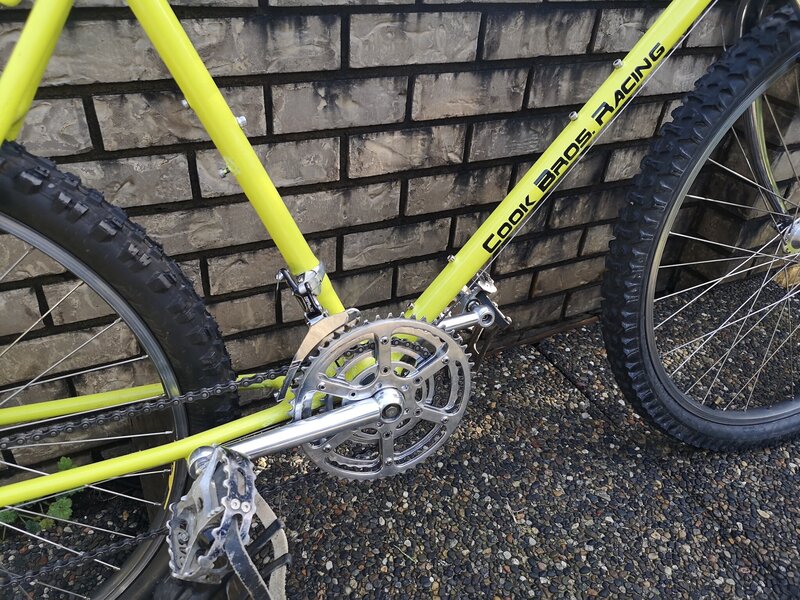 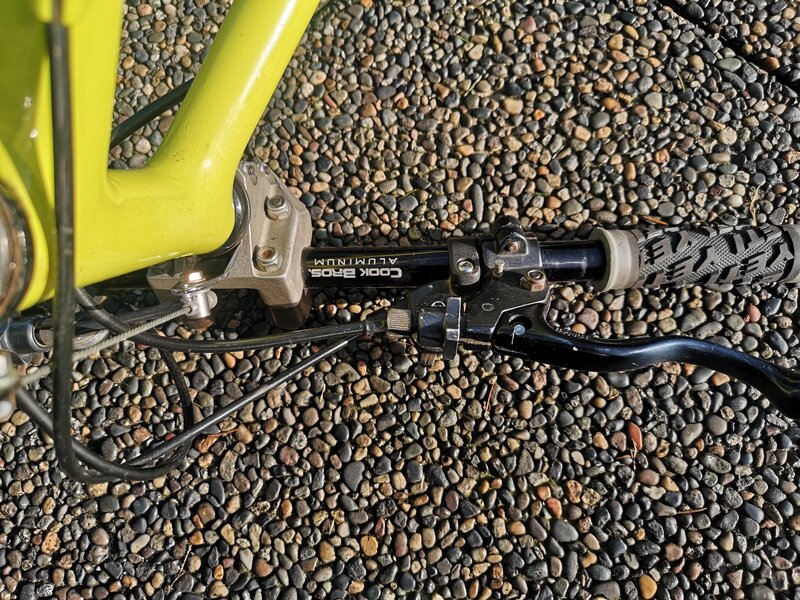 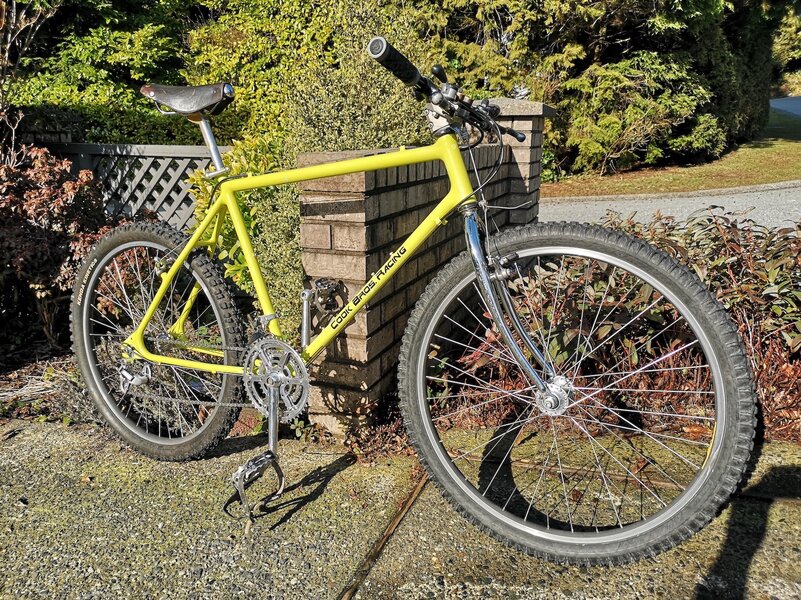 Brodie Fan
This bike comes from an Era when if you wanted a mountain bike, you had it built up part by part because there really wasn’t too much to choose from as factory complete mountain bikes . Cook Bros and Schwinn’s were our go-to base bikes to use at the time and for ‘80/’81 most of these that were built up in my neck of the woods were single speeds to handle the challenges of downhill riding ( Klunker style) of the North Shore mountains on the West Coast of Canada. This was all heavily influenced by the LBS that sold these and made regular trips to SoCal (20 hours driving time) to pick these up along with all the custom parts.

I bought this bike new in 1982, it was my second “mountain” bike as my first was a single speed Mongoose Kos Cruiser with Cook Bros straight forks. I put in the order for this and all the custom parts I wanted and sure enough, a few weeks later the guys from the LBS brought these all back from California. It was designed as a single speed but I had it built up with rear gears from the start (Classic “We had to spread the frame to get gears on our bikes……” ). I ordered it with all the Cook Bros parts available at the time : Straight forks/ high rise bars/ Unistem / multispeed hubs/ bottom bracket and Cranks ( with the optional 6 bolt spider for the French TA Specialites cyclocross chainrings which were popular here locally at the time, as Shimano/etc weren’t even making mountain bike parts yet or at least not proven) . It had Mafac canti brakes/ Suntour friction shifters and I was running a Campagnolo Nuovo record long cage rear derailleur on it. It had a single front chainring with dual chain guards on it at the time.

Over the next few years, I modified it to keep up with the fast pace of change in Mountain bikes going on. I added the current Shimano XT (Deerhead) cantilever brakes when they came out in 1983, added front gears in 1984 (added the 2 extra front chainrings to the CBR cranks) and also changed over to custom Tange raked forks from the Cook Bros straight forks (which I still have) . I switched out to the first Shimano SIS shifters and derailleurs in 1987. I stopped by the Cook Bros. factory (Santa Ana, CA) myself and pick up the low rise “Sushi “bars in 1986.

But it was in 1984 that It went through its most significant changes. By that time, the paint was already in poor shape, It’s original tan color and painted graphics were a sorry sight from constant riding in the rain, mud stuck in between the frame and zip ties holding the cables in place and scratches from locking up the bike to the stair railings at school every day. Mountain bikes had now shifted away from the Cruiser style frames and were evolving; even Cook Bros. then had their “Alpine” model which had all the cable hangers brazed on it but was essentially the same straight frame. I had it sandblasted and was about to repaint with Endura (similar to Imron two part epoxy paint) but decided to do some brazing first to add the cable hangers it really needed. The original frame came with the cantilever brake mounts but nothing else, not even the brake hanger which originally was a hanger mounted to the seat post clamp. I grew up with access to welding torches. At the time I was still in high school but had the confidence to take this on. (I was also making my own snowboards back then when Burton only made wood boards (They had no fibreglass /Ptex or metal edges) so thought this project was not out of my realm). I sourced out the inserts for the water bottle holders and the Ritchey cable stops from a local shop (who I believe was from Paul Brodie as he just started building bikes for Rocky Mountain that year and was probably the only one hand building mountain bikes in town at the time). I machined up the other fittings (brake cable hanger/seat post clamp and internal cable routings) I completed brazing these fittings on the frame and decided it needed internal cables through the 2 inch bottom bracket (to keep the downtube cables close to the frame), It all worked out pretty smoothly, so decided then to go all out and fillet brazed every part of the bike. I had heard of at least one of these frames cracking (from heavy use (or abuse) as these are bullet proof frames) and thought the extra fillet brazing would add some much needed strength for riding our local trails.

Currently it has the same paintjob from 1984 and could really use a repaint, but I haven’t had the heart to do it just yet – sentimental reasons . The paint is a bit rough in spots now (chipped and touched up) since it and it now 38 years later and has dried up / shrunk/ become brittle and a few small cracks (in the paint only) here and there have developed. It’s still shiny though, being a two part epoxy paint (Endura) it has really performed well considering.

There are those (Bmx collectors / etc .) who will probably ask if I would re-do the “molestering” to such a rare frame if I had a second chance and the answer is definitely – YES - No regrets, but in my defense, it wasn’t such a rare frame back in 1984 (around here anyways) I did recently get a second Cook Bros (1981 curved frame) from a friend who bought it around the same time I bought mine. That one needs some restoration but is all original and has all the same parts that it was first built with so I do have an “original” Cook Bros still. (Photo of it in the LBS store window in 1981 is in my profile banner)

Anyways that’s a bit of the back story and how this bike came to be and was my go to mountain bike for the better part of two decades. I still ride it once in a while now but have been expanding my horizons (bike wise).

This bike has always been rock solid, and never let me down. It’s a long bike so works well with the short stem and was always a ripper on the descents, but is no slouch on the uphill with the long cranks for extra power.

This bike is and will always be my favorite.

Added: Here are a couple articles showing what was going on with mountain bikes around here: 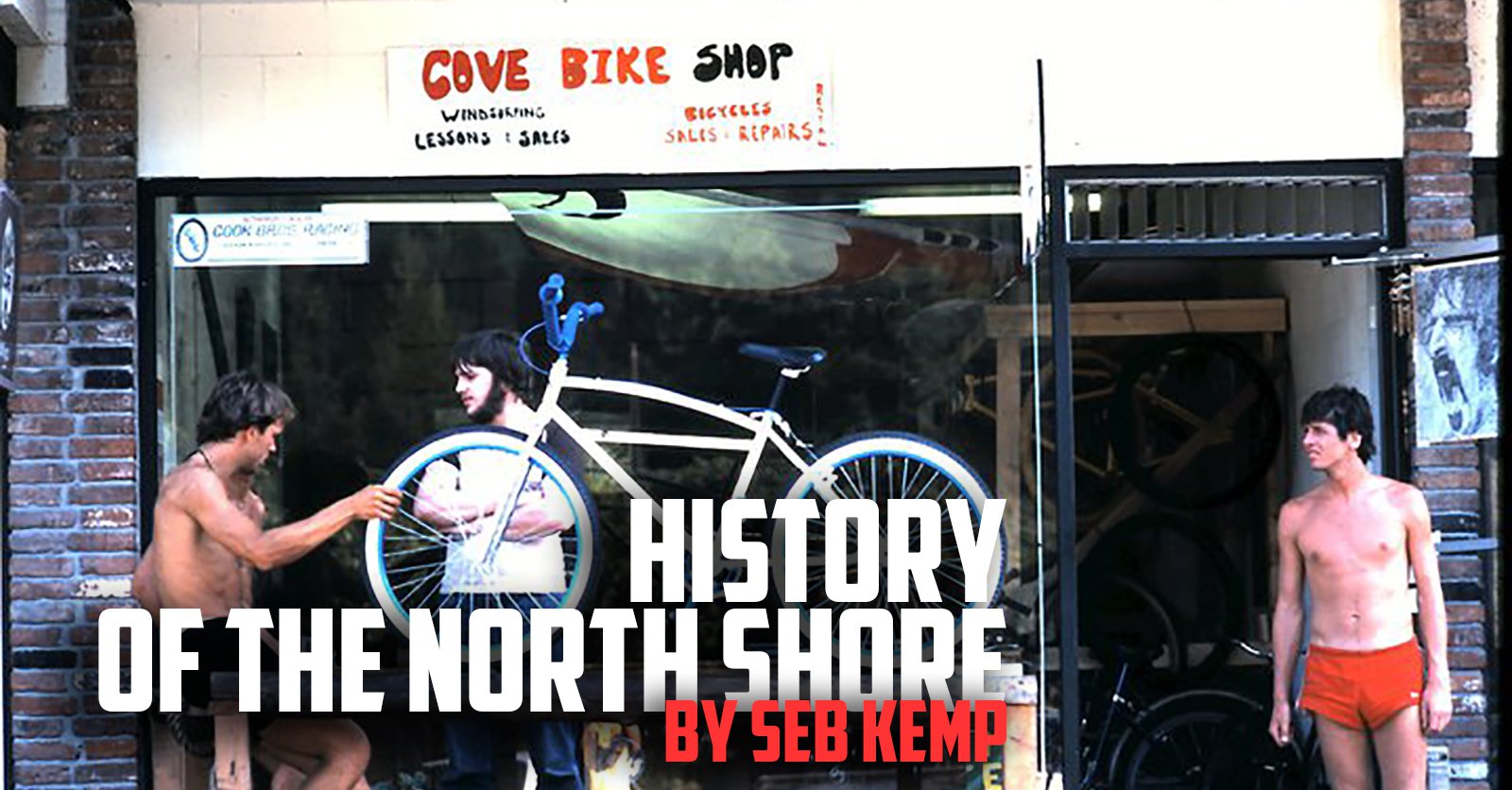 NSMB.com - History of the North Shore

Photos in this article show the type of bikes being ridden locally at the time. 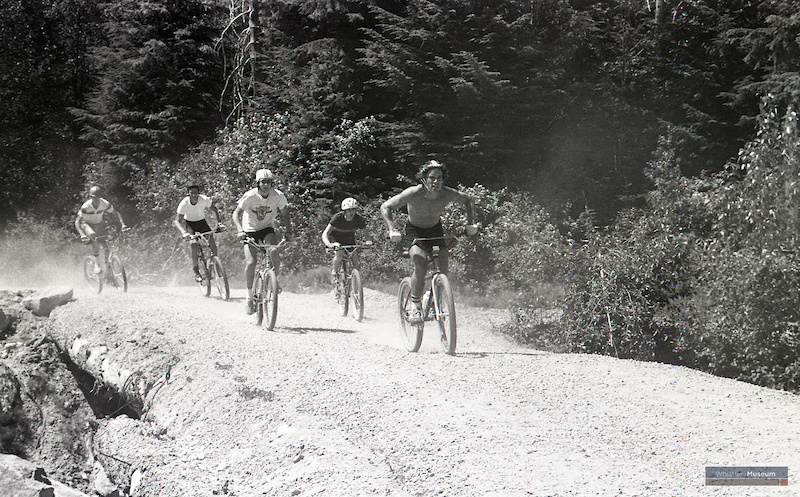 Here's a small glimpse of mountain life and the first ever race held in Whistler from Whistler's first official newspaper 'The Whistler Question' discovered by the Whistler Museum.

Now that is a bike you don't see every day..! Awesome, and in amazing shape too.

Best thing I’ve seen in a while
F

Here is my 40 year old, Custom 1982 Cook Bros. Racing (CBR) very rare straight frame Racing Cruiser (serial # 115) which I have owned since new. It’s by far not a catalog bike or new build, but I did take it all apart and cleaned it up/ polished a few parts before taking these photos.

i like that, dont think i have seen one before. Familiar with the bmx's, and this has a few of their design features, and also with the curved tube cruiser as in your banner. Were there many of these made?

Just wow
You must log in or register to reply here.