85 Saracen conquest....what have i started!

Something simple today. Just cleaned up the stem. Previous owner had an "apple sticker " fetish. He stuck them to everything.....bars, rack, stem, lights!

After soaking in some paraffin to remove the goo, it was just a bit of sanding to remove a couple of knocks then a quick polish. As for the hardwear, at one time i put all my nuts and bolts in a jar of white vinegar on the bench for 1h then rubbed them up.

However after @Peachy! Recommendation of trying Evaporust, i bought 5l whilst on sale at my normal trade car part suppliers. Its a bit slower, but after 48h, there is less cleaning to do and its certainly kinder to the chrome parts. BUT, i do miss the smell!

Hardwear all good to go again, no replacements needed.

The bars are 22.2 clamp, so choice is limited for replacements for the bmx ones that were on it. Luckly, might have a lead on a pair.

Its mech "D Day". Its knackered.

Luckily, during my musings a fellow retrobiker very very very generously karma'd me a broken one he had. Which was luckly, as "super plate" deore xt deerhead mechs are not easy to come by!

So before i start.....thank you @Robert66 This is actually a " famous" mech ( all be it broken) in its own right....it came off Eric Newby wifes Overbury bike they used to do their trip featured in "round Ireland in low gear".

Fortunately it was broken in a different way to mine! So its an ideal donor.

These mechs are complex buggers compaired to the next generation xt stuff.

Essentially the "super plate" allows the top jocky wheel to move with the cassette profile....this movement is driven by the mech being pulled forward as the chain in essence shortens. However, the amount it moves it set by a friction plate inside and the mechanism is moved round by and internal cable .......here's an exploded diagram.

Exploded views downloaded from the Shimano web site in 2020. ...

Apparently, like a shadow mech, it made for better shifting as the jocky was always perfectly set to the cassette and allowed for bigger low gear.

The Cranes used what they called "Winch" which was an adapted freewheel with a 38 tooth at the top...this was modified from the standard 30t.

The problem with these mechs is that the mechanism inside whilst working well, is easily damaged by any action that over stretches the chain, as this pulls the guts apart as they can't cope with movement outside their prescribed range. This is exactly what looks to have happened to mine....in the first picture you can see the cable thats ripped off and the somewhat ridiculous PLASTIC guide!

The cable guide inside breaks / gets ripped to shreds if say the chain gets sucked or stuck! Not great really if your bouncing around off road!

The other problem.....(this was how the donor was bust!)....is that it has a very thin metal back plate holding it all together.....if twisted....say falling on the mech side. The whole assembly gets out of line, looses tension and eats itself!

You can probably see why Shimano dropped them and went back to the more conventional design of the m700 standard......

So heres mine before, in bits ready to go back together and after its restoration.

Also a cheeky shot nicked from the book of the mech in use and the " winch" gearing.

Whilst im waiting for stuff to cook in various potions for cleaning, I've had some good news on the frame.

It looks like the nasty rust behind the mudguard and in a few other places, was all from the surface in.....not the dreaded inside out!

Inside (we stuck a cheap Amazon endoscope in it after it was cleaned up and de greased.....£7....works on a phone and puts your mind at rest) is actually pretty good.

We basically sat the entire frame in a chemical dip that removes powdercoat.....and everything else! Once sure it was not "tissue paper" we went over it with vapour blasting kit......inside and out.

Its a bit pitted in places where the rust sat, so its going to go through the powdercoat twice.

This is always a bit of a toss up...you loose a bit of lug definition, but it does smooth out the considerable pitting on the downtube, chain stay bridge area and forks.

Should be back in the next few days.....thanks mate for all your help ( not that im not going to pay for it next time that RD engine craps itself......again!).

Ive also decided to do it black, not green.....i dont like green and black was the other option bitd from saracen.

Plus, the red decals, look better than gold in mho! These are already here courtesy of H Lloyd.

Any news on bar choice?

Peachy! said:
Any news on bar choice?
Click to expand...

I will probably go to the kings head tonight ....

I was very lucky again, as one of our fellow retrobikers had a pair of original Sakae MT risers going spare. Which is ideal, as obviously the stem has a 22.2mm clamp so offerings are limited. We did swaps with some brake levers which was even better..

After a good wet and dry session and a buff, they are pretty good to go!

Now have a replacement front hub, so ive been able to work out and order the spokes. So wheels will soon be ready to build.

Frames back tomorrow and various small parts are out of the "sheep dip" tank.

Finally for today the rather disgusting chainset has started its journey to redemption! Just needs a polish now its been cut back to remove all the scoring and knocks.

Getting quite excited now!

Frames back. Cleaning up the threads and holes.....then wash it out with ACF 50, before the decals go on.

Luckly looks like we have not lost too much definition on the the lugs and the pits have all been covered up well.

Today was a polishing day....5 chainsets, 3 sets of brakes etc, and these for the conquest. 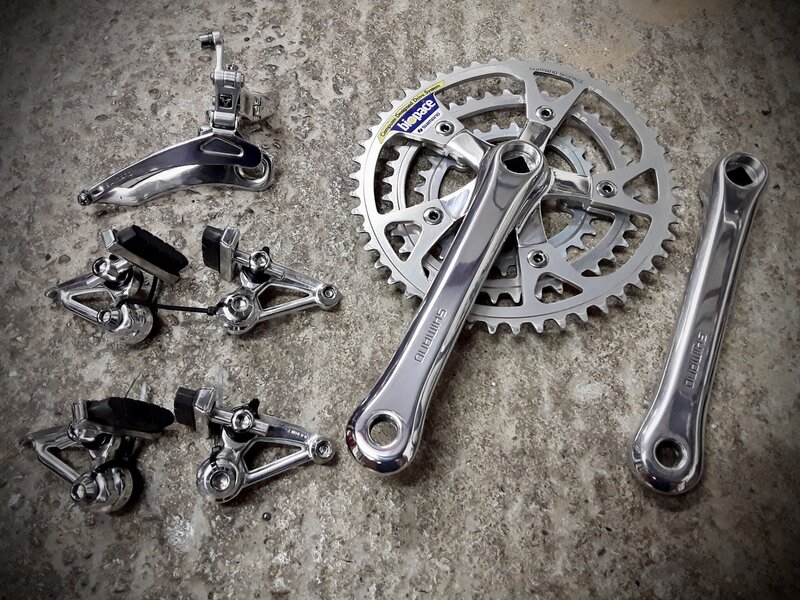 A little extra overview of the start of mtb in the 80s.