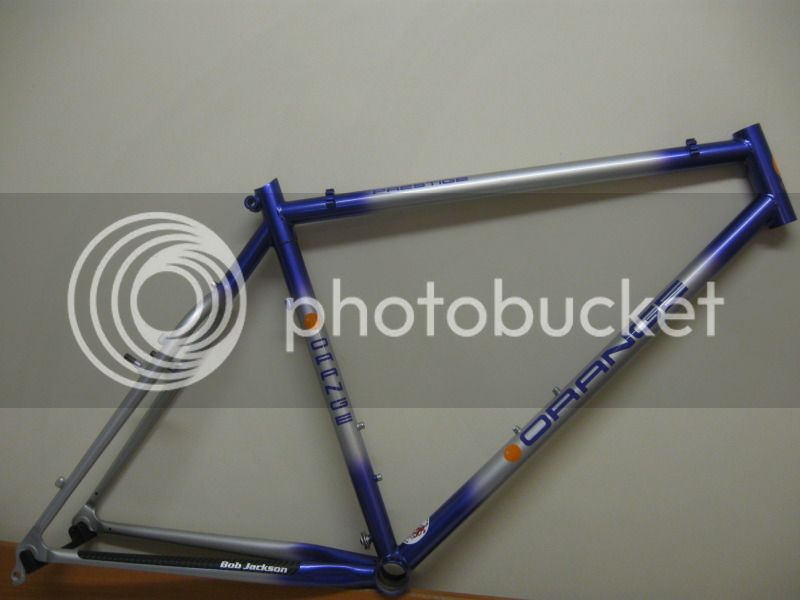 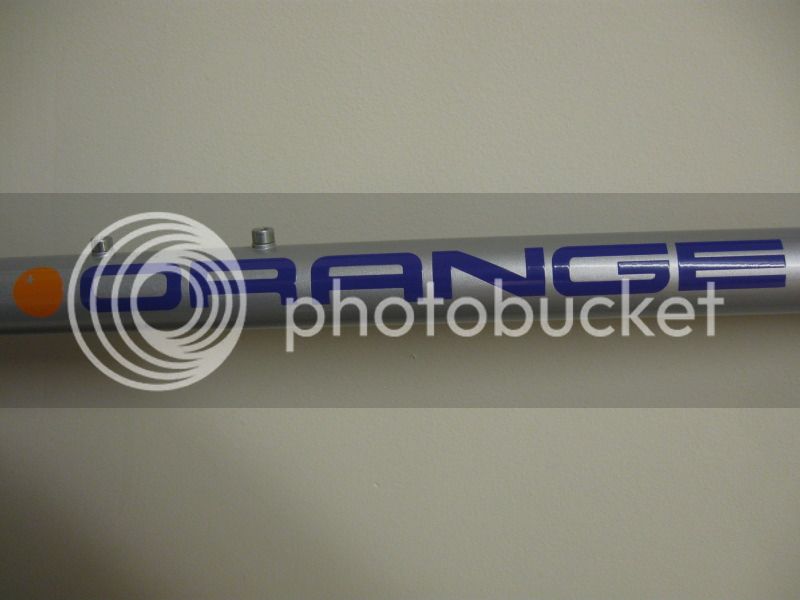 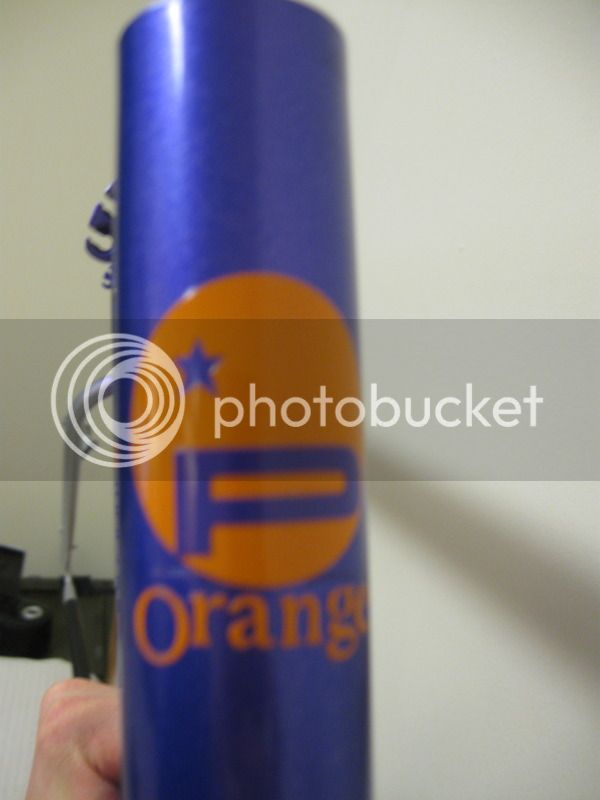 There's a story behind this frame... way back in late 93'/early 94' I was a young mountainbiker and had recently had my Claud Butler Magna stolen (some might see this as a blessing ) and so the insurance paid out the value of the stolen bike, so I saved up money from part-time jobs and browsed the magazines (no internet back then!) for what bike to get. I knew it had to be a hardtail, and steel, and so bikes like the Explosif, Stumpjumper, Hoo-Koo-e-Koo, Rock Lobster etc were all possibilities, but in the end I opted for an Orange Prestige from Leisure Lakes in Bury.
The frame was on sale at a discount as being a "last seasons model", and so I ordered the frame, some Pace RC30 forks, and Magura HS Raceline brakes, and then had to take a trip over to Bury to pick it all up, like a kid in a candy store.

It was built up with DX running gear, Mavic MA40 rims, Grip Shift 800 x-ray shifters, X-Lite Ti bars, Controltech Aheadstem, Vetta SL Ti saddle, and SPD's, and according to the scales at Stif in Leeds came in around the 24lb mark.

Over the next few years it was used in MTB races, cyclo-cross races, and even wednesday evening 10mile road time trials with tri-bars and a set of Specialized Fatboys on

It was my one and only bike for nigh on 10years, and then for some reason I convinced myself that full-suspension was the future and so I put the Prestige up for sale :shock: I think it sold for something like £150, which even then (somewhere around 2002/3) was a lot of bike for the money. Needless to say the GT I-Drive which replaced it never really won me over the same way the Prestige had

So fast forward a few years and I stumble across the Retrobike site, and it re-kindles my passion for mountainbikes once again A few bikes are bought and sold, until one day whilst browsing the forum I come across a thread which makes very interesting reading... http://www.retrobike.co.uk/forum/viewto ... mp;start=0 another Retrobiker has bought an Orange Prestige frame, and it bears an uncanny resemblance to the one I used to own! :shock: In fact it turned out to be the very frame I had sold all those years ago, what are the chances?!!

It's new owner was intent on building it up, but through PM I hinted at my interest should it ever be up for sale. Well, after being renovated the frame was recently up for sale and so I deceided it was now or never and bought the frame. The Prestige frame I had originally bought in 1993 and used for nearly 10 years was now back in my possession

The previous owner had the frame repainted at Bob jackson cycles in Leeds, and they did a top job on it, it's literally like a brand new frame!
I am 100% sure this IS the same frame I originally bought, not least because I had the rear brake cable stops drilled out to allow the hydraulic brake hose to run through the stops.


Couple of things that I don't understand though....

Where did the canti brake bridge go? looks like it's been removed, and shouldn't there be rack mount points there too? (I can see a small pinprick hole each side, perhaps they were fillered over?). 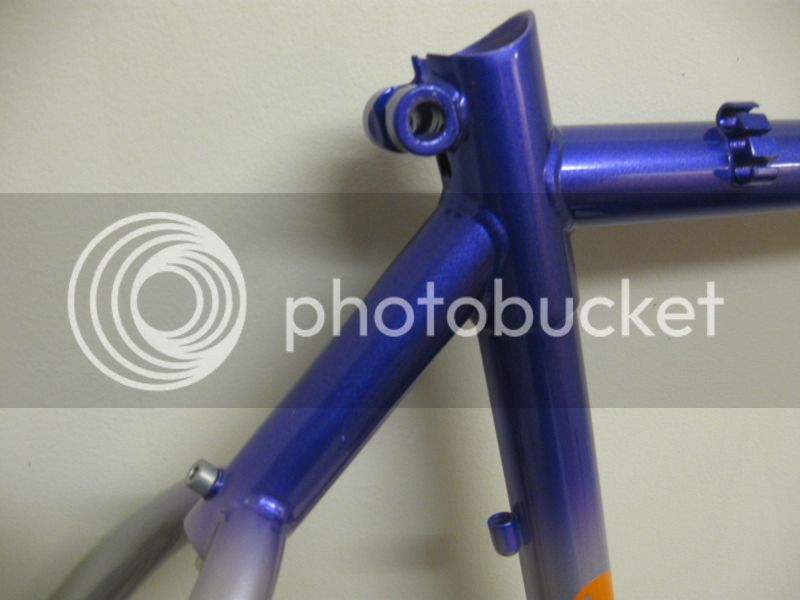 Also, shouldn't there be rack mounts on the dropouts? looks like they've been chopped off too... 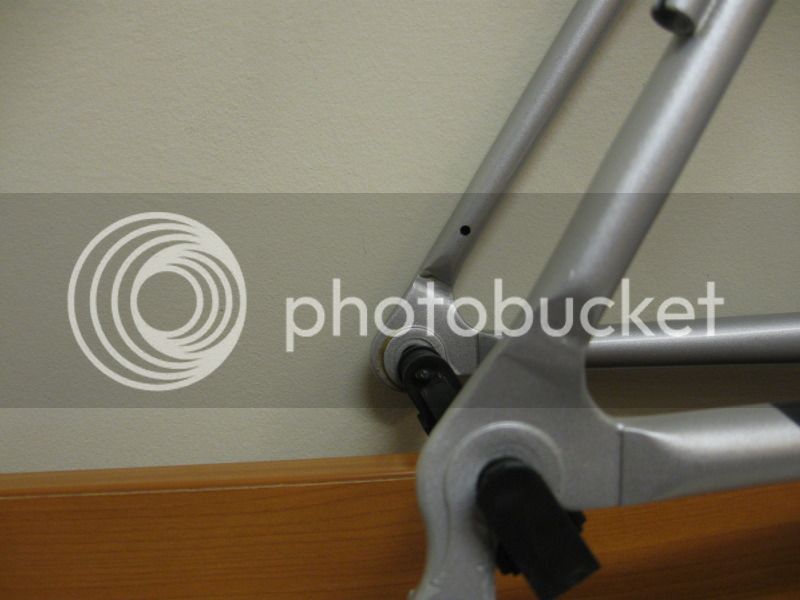 I'm pretty sure these things were originally on the frame as I recall the Prestige had these features (ie rack mounts) but the P7 did not (more of an out & out race frame?).


This is not a problem though as I'm unlikely to use canti brakes on this build, to be honest I'm not sure how to build it up, I'm tempted to just transfer most of the XT M739 kit from my Proflex to make it into a runner as soon as possible.
But I wouldn't mind updating the build for the 21st century, creating a build which would last me for at least another 10 years, and using up to date components, but on a retro steel chassis. :?

For now though, I'm just chuffed to have rediscovered my first "proper" mountainbike
P

B.I.T.D I chopped off the rack mounts on mine,

It was always thought if fcuked the look up, (now I know in the eyes of the purist on here I just fcuked it over)
why have racks or mud guards on a bike you bought to race.. almost like buying a sports car and then fitting a towing bracket

I just seemed wrong wrong wrong... never seen a Pace or a Klein with em
it's mainly the preserve of cheap Catalogue bikes or old farts on Tourers..
The Yeti Yak is the only (cool) exception to the rule I've ever seen.

But then what do I know, got this fella sprayed about 10yrs ago in non original colours when I got fed up of the Blue and silver then used Decals from a more modern Clockwork

I suspect the previous owner got rid of the Canti cable stop as it dates the frame and unless your a Retro Nut why the hell would you wanna go back to Cantilevers. Besides if you drilled the rear cables stops out in order to accept a Hydraulic brake line then it genuinly was a redundant feature.
My Rack mounts were chopped off by Argos in Bristol and you'd never know they were ever there... guess the same goes for yours, a wee bit if smoothing over, a decent undercoat and all traces have suddenly vanished.

After reading Navada's Orange Formula thread I wish I'd have gone Orange and White 10yrs ago....


All the best with the build looking forward to seeing how this turns out.
must be akin to meeting your first girl friend again... hope second time around the block its just as good for yah as you remember :shock:

This build might just be finished in time for next year!

A few things have been collected though, notice the purple theme on this build??

Thanks to Rampage for his excellent anodising work on the USE seatpost and also the fork crown, top stuff! 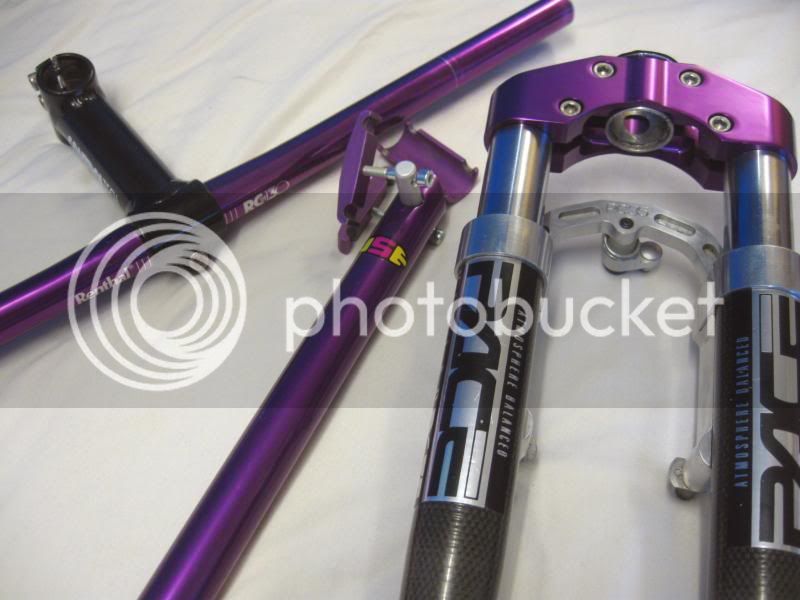 Nice nice nice!
I've just taken delivery of a 93 Prestige to build up after I've decided wether to get the paint work restored or not.

For the record mine has rack eyes on the upper wishbone but nothing on the dropouts, my clockwork does however.


jimo746":1ggzzajx said:
A few things have been collected though, notice the purple theme on this build??

Thanks to Rampage for his excellent anodising work on the USE seatpost and also the fork crown, top stuff!
Click to expand...

That looks the mutts nutz... what colour were they before Rampage did the bizz
your build is going to look great.
J


Retro Spud":wgz85sx1 said:
. what colour were they before Rampage did the bizz
Click to expand...

The fork crown was silver, and the seatpost used to be purple but had been polished back to silver, it's now like a NOS seatpost

I'm not an Orange fan, but that's definitely caused a stirring in the Y front department.
You must log in or register to reply here.