A few things to note, which I'm sure you all already have:

- It's glorious!
- Aggressive, progressive geo for a larger sized frame from 1991.
- That noodle!
- Most of a full XT group, including thumbies.
- Well abused, patinaed Ritchey brake levers with matching seatpost.
- Original WTB Trailmaster grips, and far less original semi-modern WTB saddle.
- A generally weird cockpit arrangement! The stem I have no clue about... Anyone? Paired with a more recent/modern Koski riser bar.
- Topline cranks. Uncracked! Which is rare unto itself.
- A mashup of chainrings and a poor choice of pedal.
- American Classic skewers front and rear
- Mismatched wheelset. Mavic front hub and rim (no decals, so...?), and a Wheelsmith built Mavic 231 with a Sansin rear hub.
- Budget tires.
- Diacompe 986 Front cantilever.
- And THAT McMahon MRC Powerlink!

Bontrager Fan
Nice bike there Phil.
Stem looks like a Controltech.
That rear brake is sweet.
Can't wait to see what you do to it!

benjabbi said:
Nice bike there Phil.
Stem looks like a Controltech.
That rear brake is sweet.
Can't wait to see what you do to it!
Click to expand...

Oh yeah, I hadn't though of Control Tech. It does though, you're right!

Anyway, that's already gone. So it's only really a concern if anyone here wants it off me!

As for what I'll do with it:

Not much, but also kind of a lot!

More on all that shortly, though...

PS. That rear brake IS sweet. A right, royal pain in the arse to get setup tho!
J

Kona Fan
Lovely machine! That noodle is indeed a work of art.

So much want for a Brodie.

@JCS As a man who really wanted one, and now has one, all I can say is: GET ONE!
P

benjabbi said:
Nice bike there Phil.
Stem looks like a Controltech.
That rear brake is sweet.
Can't wait to see what you do to it!
Click to expand...

I thought Control tech too . I have one just like that, w/ the chamfered bar clamp that allows riser bars.

Right then, so I knew right away the initial changes I would make.

A different stem, bars, and a period saddle, along with fresh tires, tubes, cables and grease!

The levers I was on the fence about. I liked the extra a Ritchey hit to match with the seatpost but they've definitely seen better days.

Tires were any easy choice: 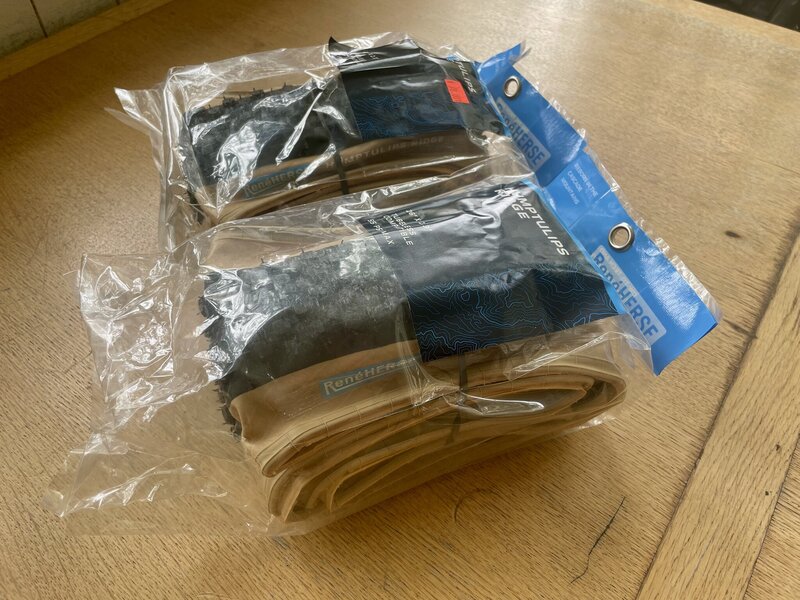 I've recently been riding these Rene Herse Humptulip Ridge's on my other bikes, and I have to say they've quickly become an expensive new favourite.

I luckily had an old WTB SST.X saddle on hand that I'd purchased while working on the Phoenix, and it was a no brainer replacement for the newer WTB saddle the bike came with: 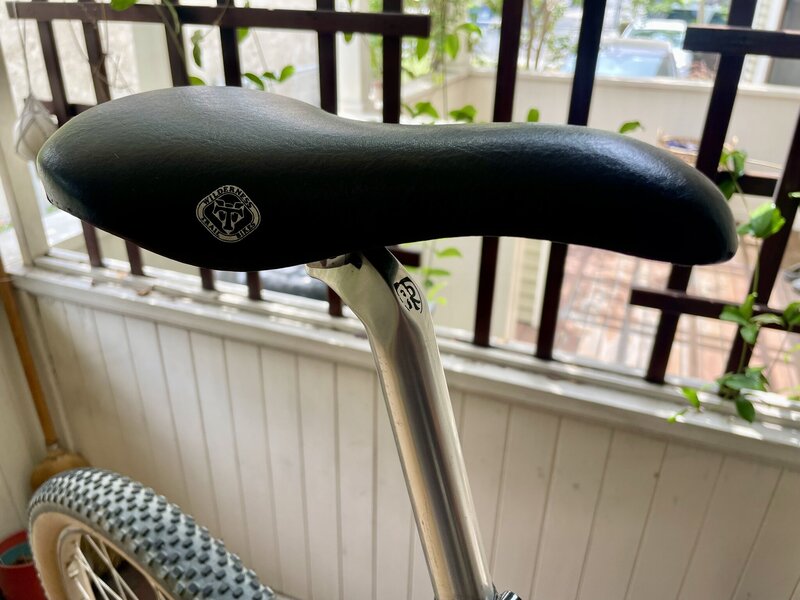 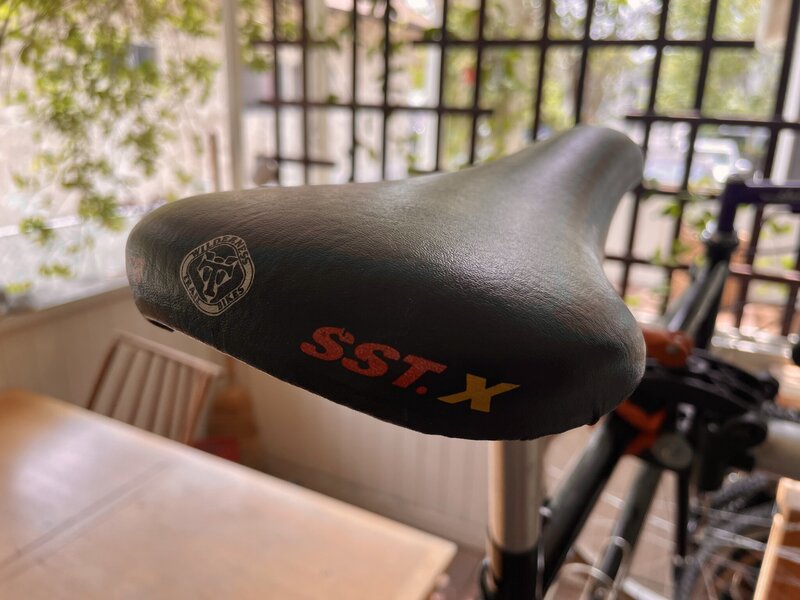 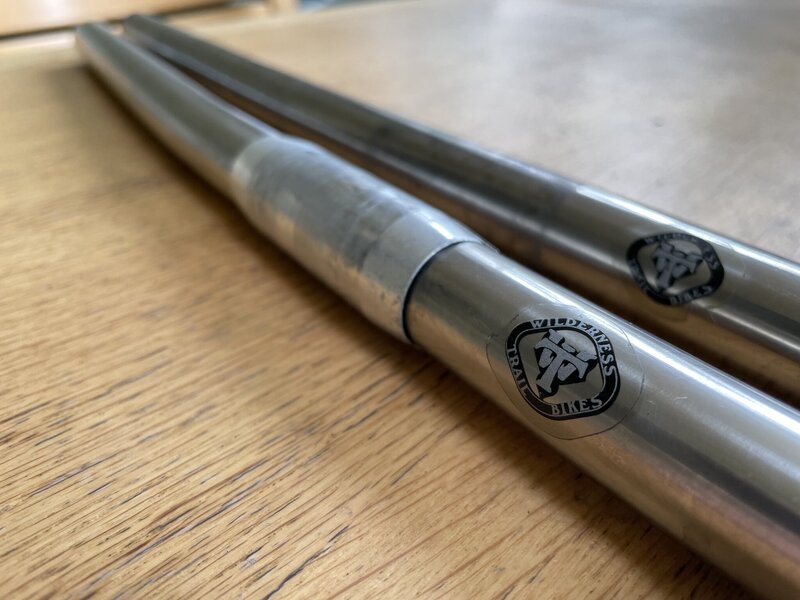 Having been looking for an original WTB ti bar for the Phoenix for a while now, in classic RB tradition, two showed up suddenly around the same time!

The one at the rear came from @stevede (thanks to a supreme RB community group effort!) and had been cut down at some point. Those went straight to Dan Chambers (@danson67) to have some shim extensions fabricated. More on that in the Phoenix thread at some point, but Dan did some exceptional work on these! Anyway, knowing how hard they can be to track down, I also took the plunge on another set that @jimbog had on his Klein Pulse and was good enough to send my way. These are the ones in the front. They're in great shape, uncut with a nice sweep and the original shim (I think).

The fact the Sovereign came with some crossove WTB history, having been worked on previously by one of their builders and employees, and that it lived its life before me in the same town where WTB was founded, I'd always wanted to include a few classic WTB touches on my eventual build, and hopefully the saddle and bars will be first of a few such touches.

The stem was a little trickier.

I had only 1" options on hand, and @raidan73 had pointed out before its arrival that the Sovereign would almost certainly come with a 1 1/8" steerer.

Mulling this over, I happened to check eBay one morning in the line for bagels while we were in Texas, and a nice, perfectly sized purple Salsa-made Ibis number popped right up for $80.

Some of you may remember I'd been asking about these stems. Well, confirmed by Ross himself, they were made for Ibis by Ross and his team, to the exact specifications Scott Nichols had requested. I'm not sure how many of these are out there, or what models they came on originally, but the noodle is a nice piece of effective design, and the rest of the stem is exactly as you'd expect from a Salsa Moto product.

Now the color might be an odd choice on an all black and silver bike, but I had other ideas for a longterm solution and my main focus was getting the bike ridable for me so I could asses what other changes, if any, I'd like to make. 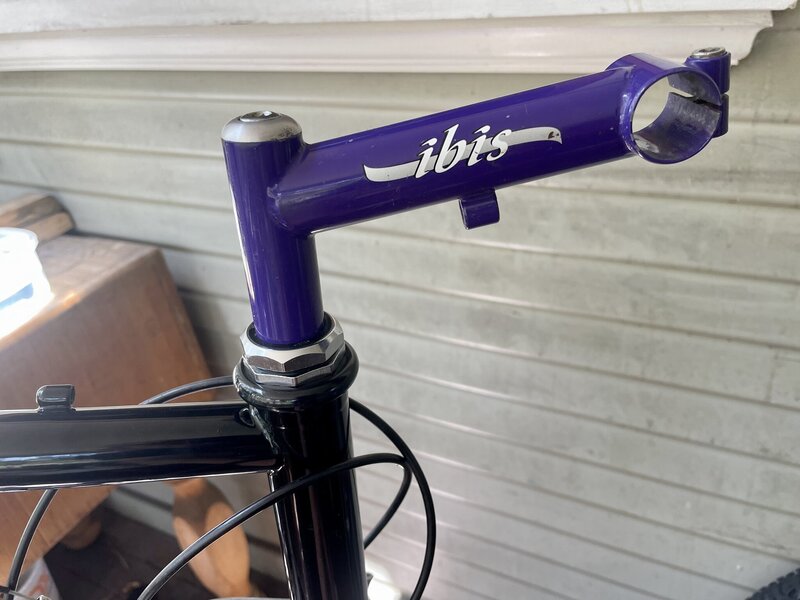 It also happens to be almost the perfect size: 125mm long, with a 10-degree rise.

As you can see above, the one problem is that it doesn't have the actual noodle!

No problem! Part of the pile of parts I'd been collecting in the UK included a fairly well-worn white Salsa stem, that @iveto1983 had kindly sent my way after I'd posted in the other forum inquiring about them. And his had the noodle! At 150mm the white one was far too long for this bike, but I figured switching the noodle over would be pretty straight forward.

Well, turns out that little bastard was stuck fast with rust. So into an overnight bath of penetrating oil it went!

I'll run through that little process and the finished results in the next post...
Last edited: May 19, 2022

You don’t need both sets of bars, you should sell me a pair

I’d even let you keep the shim!

So the morning after the penetrating bath (seen left, below), I applied a little heat, gave it a little wiggle back and forth with a few hits of the mallet, and started to get some lateral movement. A few more wacks and a slight gap appeared, a few more and she was free! 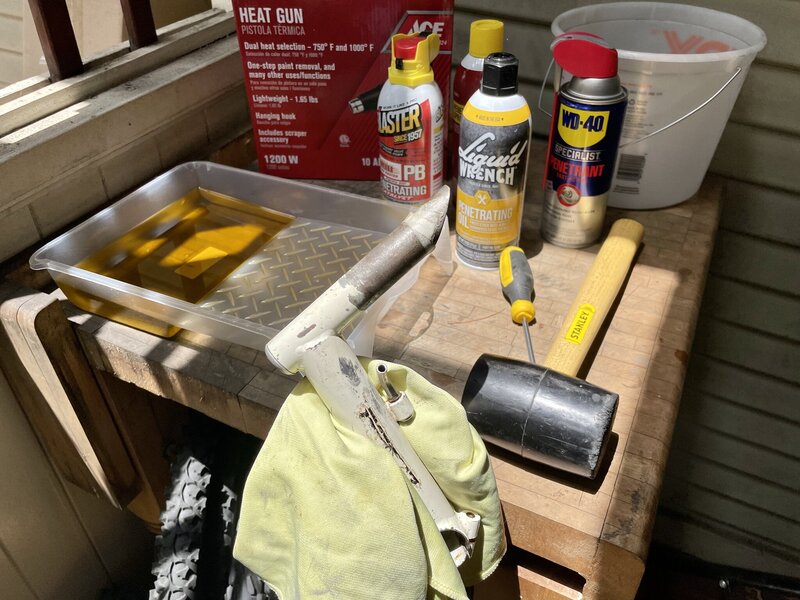 A bit of movement: 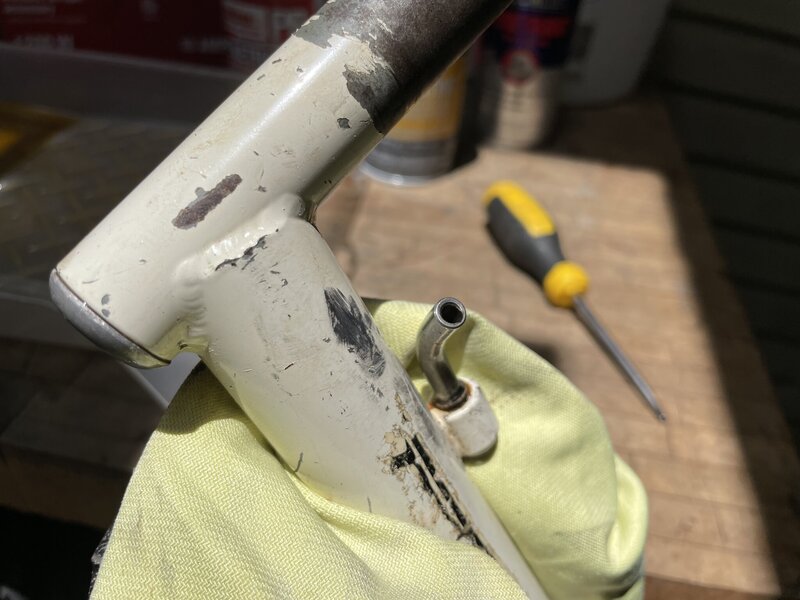 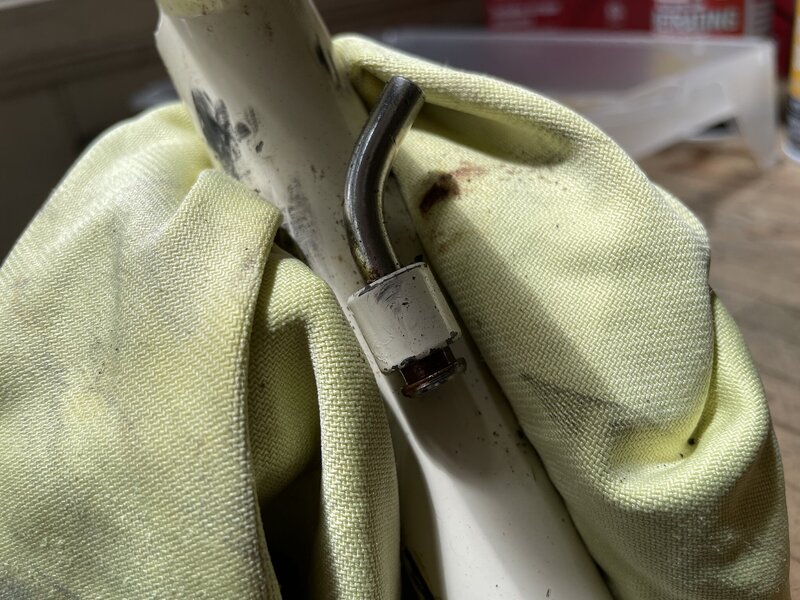 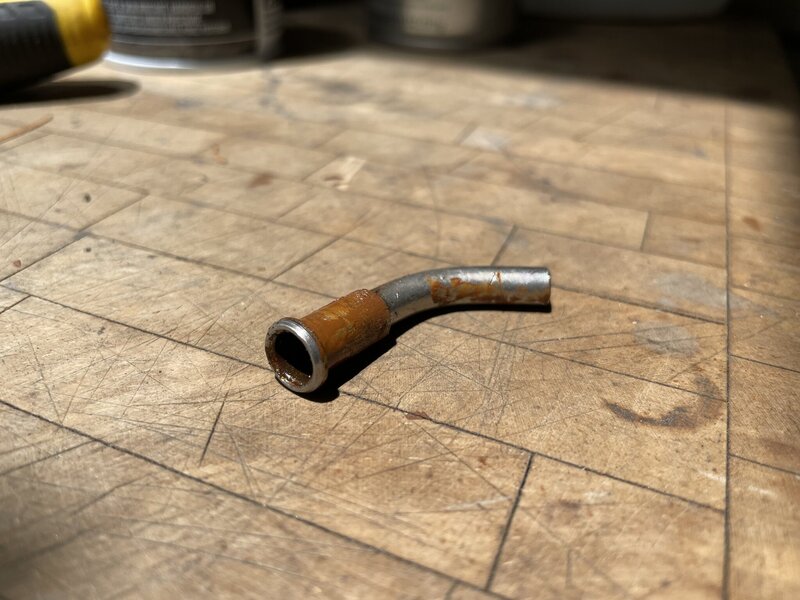 A bit of a clean: 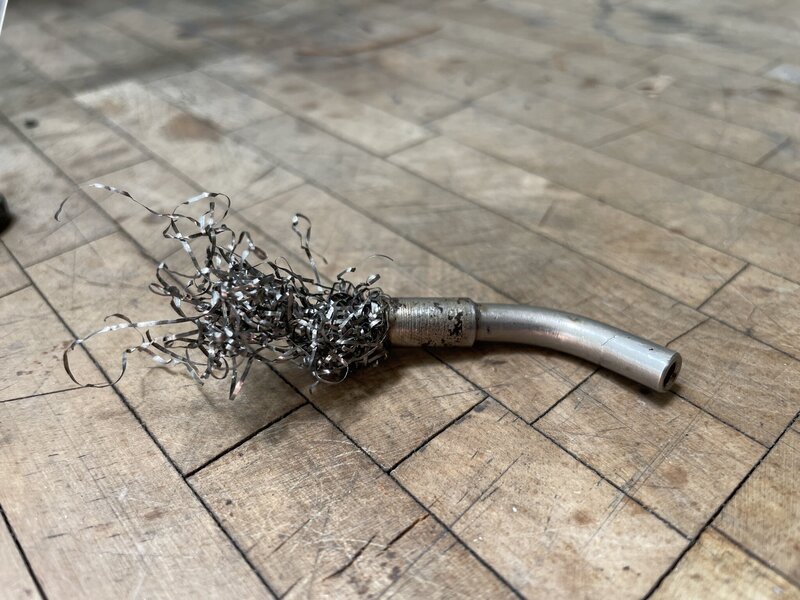 And a noodle from one stem was ready to slot into the braze-on on the other.

Because one thing I hadn't accounted for is that the noodles were made specifically for their respective stem sizes. Which means not only the angle of the bend changes (due to where it's positioned on the stem, and so how far away the stop might be from the headtube, and thus the brake) but also, I guess, the circumference of the noodle itself. Because it turns out this one was too loose inside the smaller, purple stem.

Luckily, I already had a beer on the go: 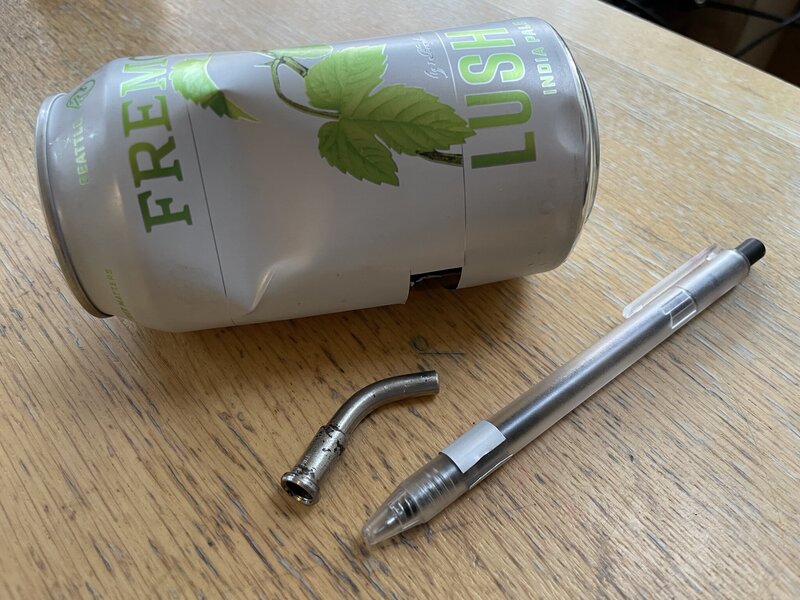 And I love an aluminum can shim! 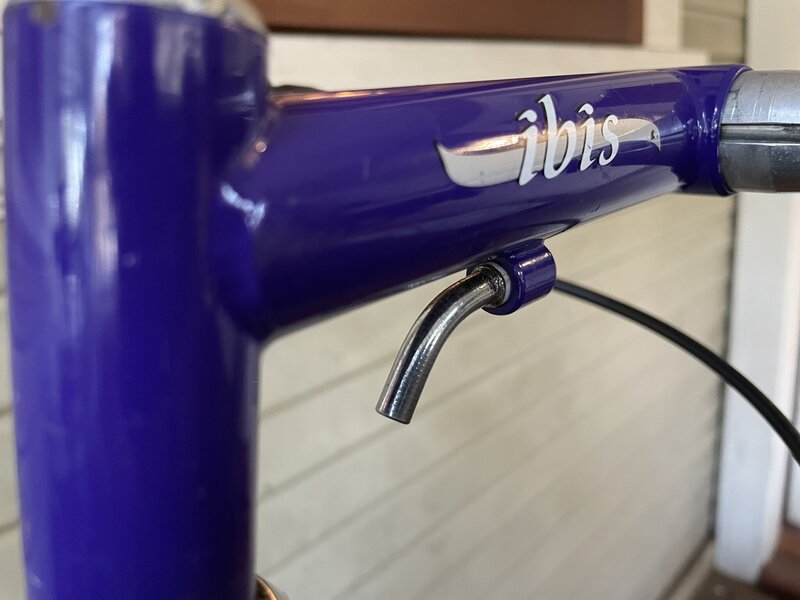 I know it's minor, but it's little projects like these that I sometimes feel are the most rewarding while working on old bikes.

Anyway, the angle is still an issue, as the cable doesn't drop perfectly vertically, but so far it's not proved a problem at all. There's no cable rub, nor reduction in braking performance, and although I plan to keep an eye on it, I'm pretty happy with the cockpit for now: 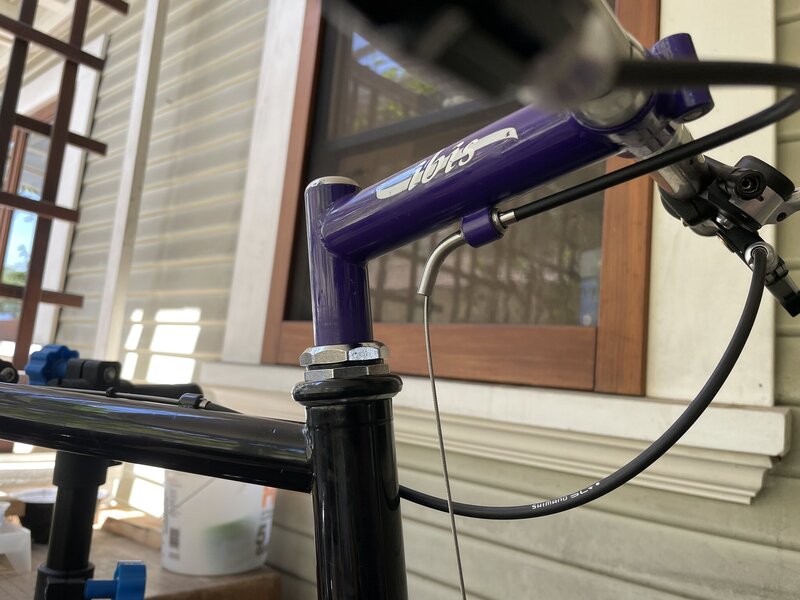 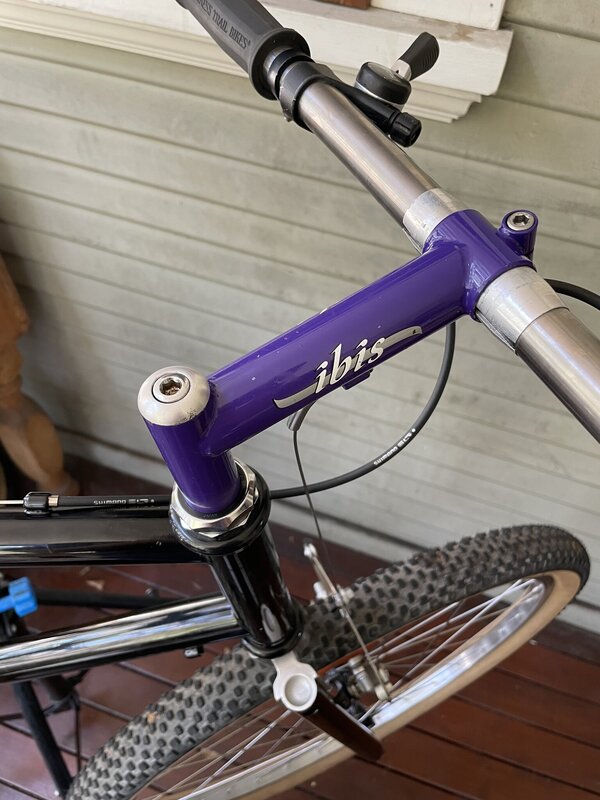 Keen eyes will spot a front brake change too. But more on that, and why the Ibis stem won't be staying forever in my next post.
Last edited: May 19, 2022
M