I've had my interval drinks, and now I'm ready for the 2nd act...

iveto1983 said:
Glad to see you’ve started the thread for this

Cheers mate. As you know, you've had your own part to play in it!

slackboy said:
I've had my interval drinks, and now I'm ready for the 2nd act...
Click to expand...

It's too late and too long a story for right now.

...I just finished a little recabling... but before I take it out on its maidan voyage (other than the once around the block when I first collected it, and that was only to take photos), I'll move onto the second act...

After asking Tim if he could check with Greg to see exactly what repair work was done, I didn't hear back for another day or so. So, a little worried someone had stolen in and grabbed it out from under me, I sent Tim another message to check-in. To which he responded:

I spoke to my friend Greg who rebuilt the bike to see if he remembered what he did to the frame and he did not. I also told him that I had an offer for $850 and he said he felt that the bike was worth "quite a bit more than that." So, I have gone ahead and listed it on ebay for $1250 plus $200 shipping (if necessary) and changed the price on CL to $1,250. I would like to let that play out before we close our deal. So, no need to send me money now but I will definitely let you know before I accept any other offers. If the highest offer I get is only $950 or so, I will sell it to you for the $850. Anything more than that, I will give you the opportunity to match that offer. I'm sorry but I just don't want to feel like I left $400 on the table. There are a lot of pics in the ebay post for you to look at. Let me know if there are any more you would like to see.

I couldn't find the serial number anywhere. I think it might be under that black plastic guide under the bottom bracket. 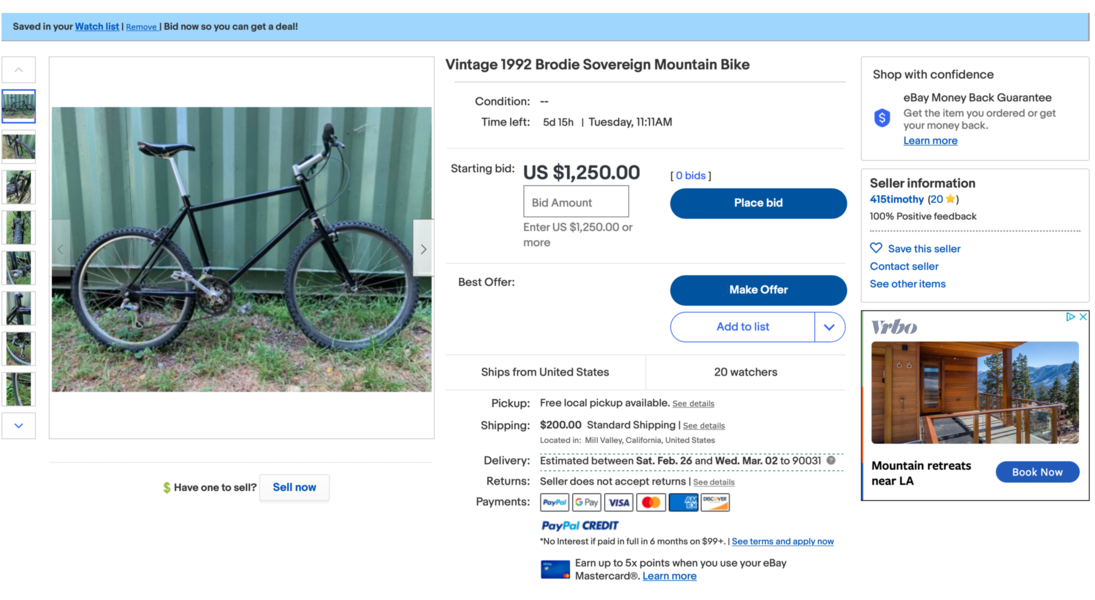 Of course, Tim was selling it for less than it was probably worth, I know people have spent more on framesets alone, and he was within every right to want more for this bike. That said, I was upset he hadn't come back to me first before posting it one eBay and relisting it on Criaglist. As I pointed out in my subsequent reply, that meant anyone with much deeper pockets than me could swoop in and hit BIN on the auction, and that would be that. This was a dream bike of mine, and I was going to take good care of it! I was going to ride it! Etc., Etc. Plus, eBay meant taxes for me, and fees for him. So now, thanks to my due diligence in checking to make sure everything was above board with the bike, I'd managed to somehow price myself out of it!

Luckily, while Tim wanted to get as much as he could for the bike itself, he is also an absolute gentleman with a heart of gold. He wrote back that he wanted me to have the bike, and that if I could meet him somewhere in the middle and send that deposit, he would remove both postings and sell me the bike at the agreed price.

The deposit was immediately sent and agreement was made to send $100 a week (Tim's idea!) until I could get up there to collect it.

After which, Tim, still feeling bad, I guess, went to recover these from Greg, along with the original catalog: 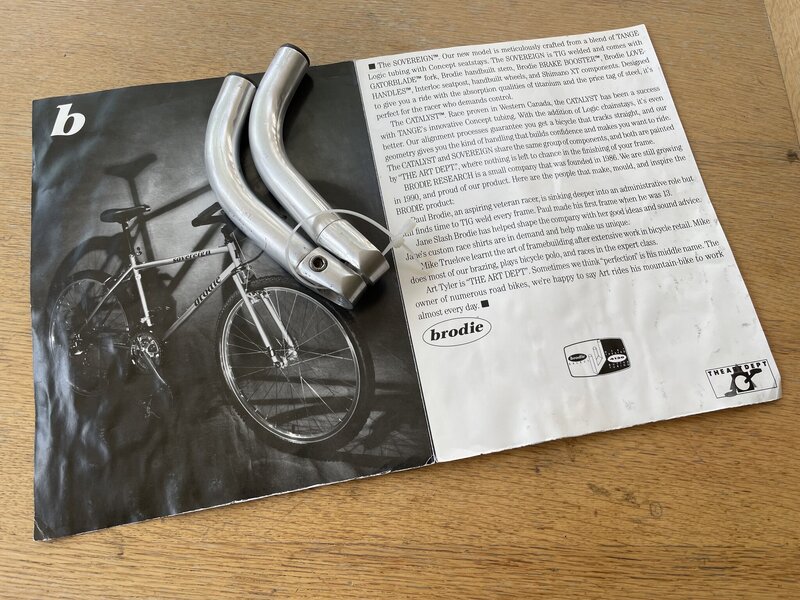 Now, I won't use them. I don't do barends! But it was a lovely gesture and it's nice to have them in the stash regardless.

Right, I'll leave this update there for now.

Although, aren't plays and films supposed to be in three acts? Which would make this the final act? Which it's not.

So work/life got in the way of picking the bike up for a while. First it was a crazy time with work, and then, tragically, my wife's father passed away suddenly, which resulted in an extended stay in Texas for us both, dealing with the aftermath and heartbreak of all that entails.

It's not a short trip to Marin from here either, around 7hrs, so ideally we needed to find a spare weekend. Mainly because it's just so amazing up there, which means it's better to have some time to spend kicking around the place. That said, eventually the best we could do was a spare Friday and Saturday the week after we returned to LA, so off we drove to Oakland, where we spent the night.

The next morning it was off to see Tim in Mill Valley.

He'd mentioned that GPS wasn't the best for getting to his place, and had given me some directions, first via email and then via phone on our way that morning.

Arriving, you could certainly understand why GPS might struggle: Tim's cabin and land sits on the very end of a very long winding road that snakes up the side of a mountain; first concrete becomes gravel, then gravel becomes dirt, and then the dirt just becomes a mountain!. And not just any mountain. It turns out Tim didn't just ride Mt. Tam, he was raised and still lives on the side of Mt. Tam! And at 70-something years old, is certainly of the generation of guys who many consider to have invented (depending what side of the debate you fall on) this whole thing we're all into.

I'm not saying Tim was part of the repack crew, but there's no way, being where he's from and being into MTB, he's not at last repack adjacent!

In fact, right before you get to his property, there's a sign for both his house, and the Mt. Tam Trail: 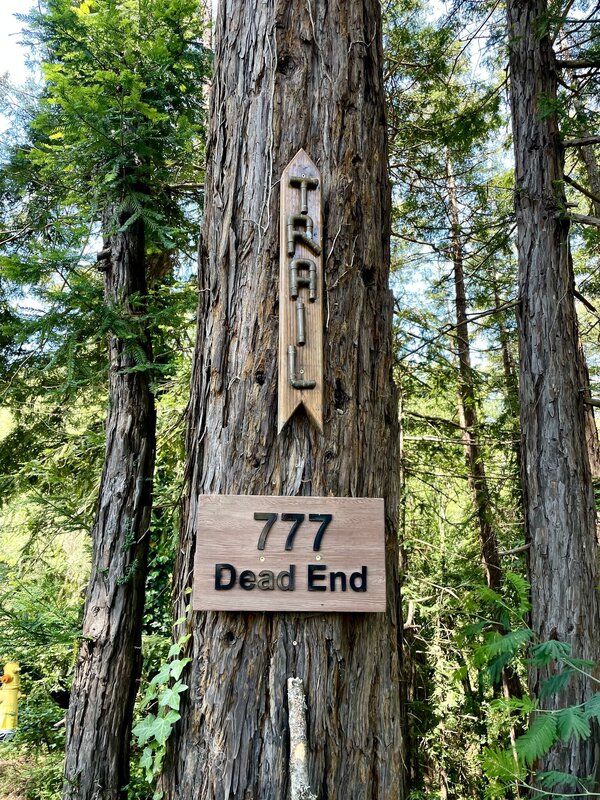 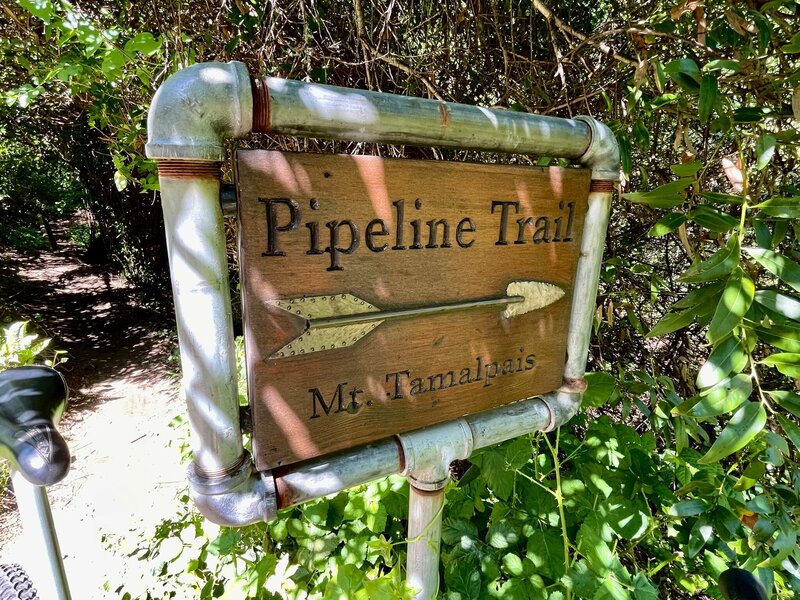 Oh, that bike. Yeah, here's a tiny bit more of it: 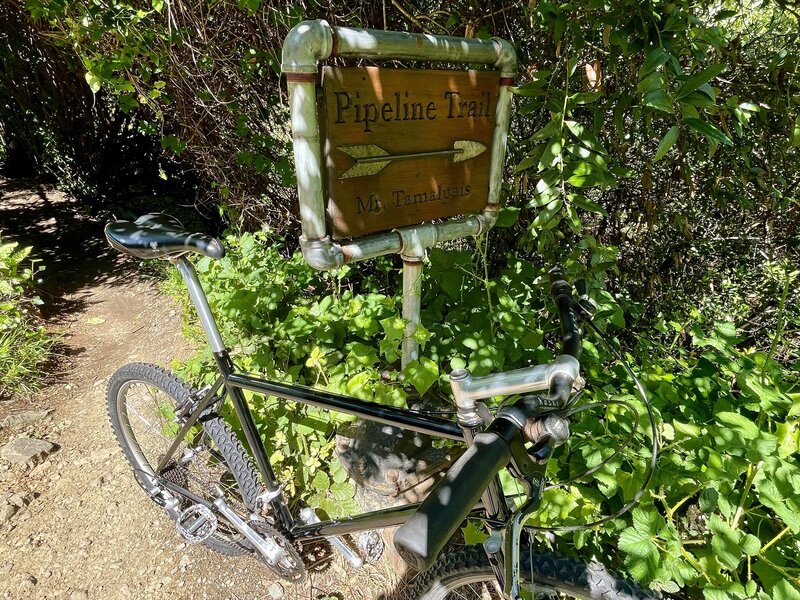 I'm going to save the rest of the bike pics until the next post, but for now I wanted to give a sense of what I collected and who I collected it from.

Tim was every bit the gentleman he appeared via our communications. He joked about wanting to print out all our emails that morning, just to count them, laughing about how many there must have been over all those weeks of back-and-forth between us. He also expressed very sweet and sincere condolences to my wife. Tim radiated both warmth and positivity, and I could have gladly spent hours in his company. Not least to have asked him countless questions about his life up there, and his time spent riding the area!

Still, we had another 7hr drive ahead of us, and I didn't want to take up too much of his Saturday. I'd occupied his time enough already with all my questions and drawn-out payments! As it turned out, by chance, the final $100 was due the week I collected the bike. So I very happily made that last payment to Tim in person.

There was something special about the bike immediately. Sure, the paint had changed and some of the parts were all over the place, but it had personality and you could tell it had been well-ridden and loved.

Tim spoke fondly of it, was sad to see it go, but, he said, was happy it was going with someone who not only appreciated it for what it was, but was planning to ride it. We looked it over together, and, like me, Tim pointed to the the cable noodle around the seatpost cluster and acclaimed: "That's my favorite part of the whole bike!"

That and the fact I now get the honor of building and riding it.

A few days later, the bike cleaned-up and the first couple of (temporary) changes made, I emailed Tim to thank him one last time, and to let him know how much I enjoyed his brief company.

Back at you man. I really enjoyed meeting you and your wife as well. In fact just after you guys left, my wife came down hoping to meet you and was disappointed she’d missed you. I told her how much I liked you both and that I regretted not asking you up for lunch and a beer. If you are ever in the hood, give me a call, I’d love to go for a ride.
When you talk to Paul, remind him of the color, lilac, that might shake loose a memory or two! Also that it was ordered by a shop called Plane Away. They ordered at least one other from him around the time I ordered mine.

I'll definitely reach back out the next time we're up there, and I'd like to think we'll have a beer and go for that ride!
Last edited: May 16, 2022

Funnily, around the same time I was up there, Matthias (of @mcada and Steel Fights Back fame), posted the following shot from a ride he made on that ridiculous new/old Potts Phoenix of his, while he was up in NorCal to collect it: 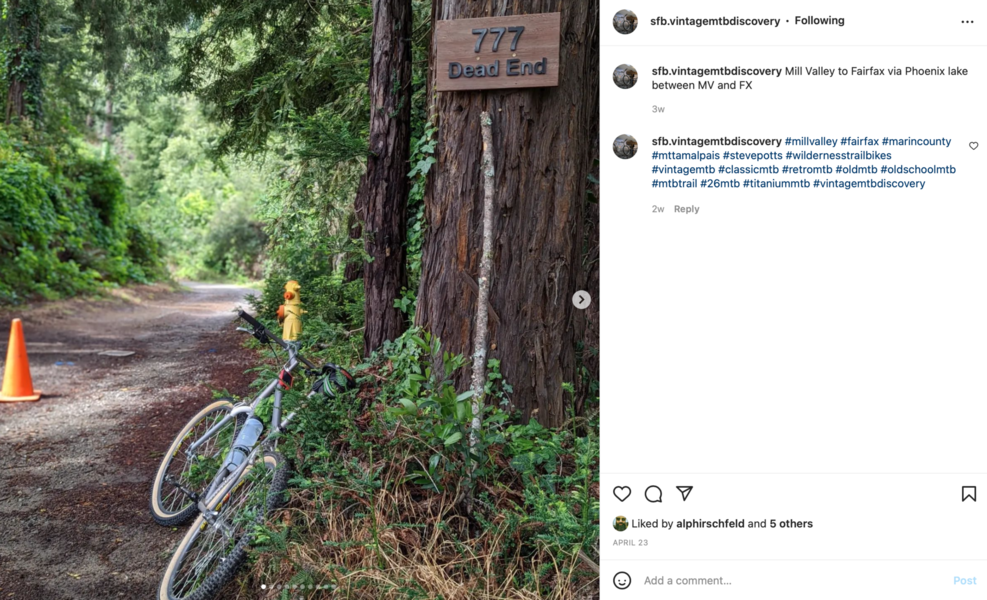 I thought that was kind of cool/funny.

Even though I love original paint on a bike, I'm not sure I'd really want a pink bike...

Don't call it pink tho! Tim hates it:

The frame and fork were a custom color that I picked out when I ordered them. It was called Fuchsia, sort of like this:

It looked great but all the guys at the bike shop teased me and called it “pink.” It was all in fun and it was really unique, like the bike, and I really liked it. I don’t know who painted the bike but I’ll ask Greg. I don’t think I still have the original paperwork but I'm in the process of cleaning out my files and I’ll keep an eye out.

Of course, one of the first things I did when I got the bike home was remove the cable guide from under the bottom bracket shell, and check the serial:

So I emailed Paul to confirm the year and what the original colour might have been exactly:

Congrats on being the 2nd owner!

B226 is a 20.5" Sovereign built June 21, 1991. Originally painted Light Violet Metallic. All our frames were painted in house. We used DuPont Imron.

So that's everything squared away and confirmed. The bike was born just a few days later in June than me, too. So it's nice that we're both Gemini's.

Makes sense it would have a bright and a dark side, too!
P

I am already liking the stem/ hbar set up. Tight and funky. Obs: leave the bike black.

Oh, you’re about to be sooooo disappointed @Prodigal Son!

But it’s staying black. So there’s that to cheer you up at least!

Nice write up Phil, the excitement and pure joy of the experience really comes through.

Looking forward to seeing some more pics. Oh, I'm in the "put it back to pink" camp
You must log in or register to reply here.