Some years ago I was thinking to myself what would be the ultimate project bike for me, the project to end all projects, something I could finish and be happy with the bikes I have in my garage, and I ended my conclusion to Tunturi Progression 3.0. (actually I was lying to myself with being happy with the bikes I have in the garage now, but it sounded nice then..) It was a DH team bike used by the top riders we had here in Finland in the late 90's, and were used by the semipro Tunturi Downhill team travelling around World Cups, World Championships and other European races. It was the newest and last generation of Progressions, and for example the previous one, Progression 1.2, was ridden to World Championship bronze medal in 1997 by Katja Repo.

The dream was quite unrealistic as back in the days only ONE was sold to the public due to its custom sized and fabricated frame and top end parts which kept its price tag at 35000 Finnish marks in 1999, which is equal to about 8000€ of current currency, a crapload of money in the 90's when Finland was recovering from a bad depression. Others were used by Tunturi team, and what I've heard Tunturi got rid of most of them after they ended their team operations and the organization was changing there. 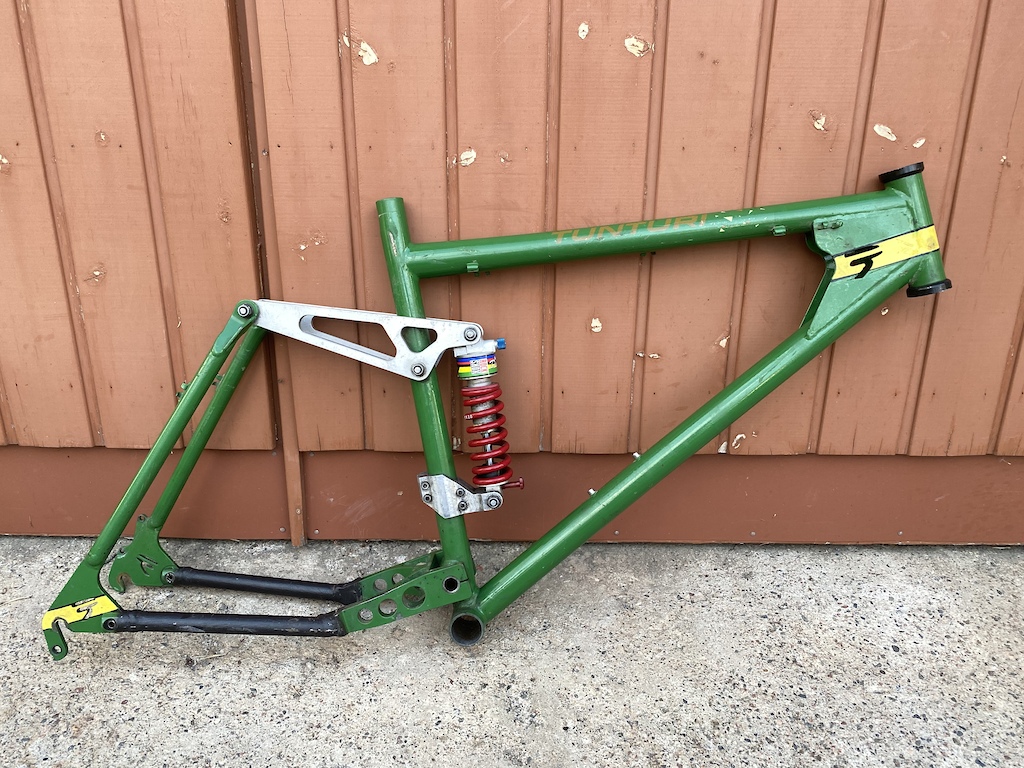 This particular frame I found very very luckily couple of years ago and the urban legend behind it goes that it was unofficially rescued by a former Tunturi employee before they dumped these, and was bought from him by another bike enthusiast. This gent had ridden it and planned to restore it, but had realized he didn't have the time or motivation for it. He had also modified the chainstay angles to allow smaller front cog, so that was one of the first things I had to restore back to original with this one. Anyways when I promised to bring it back to its original shape, he let it go happily.

Back then these were very nice frames that had custom sizing, and they were made out of Finnish steel and plasmawelded here in Finland. The frame was in quite good shape apart of the modified chainstays, but it had a lot of looseness in the rear end. The pivots on these were made out of bronze bushings and steel axles, so I had to source the correct bushings for it and have a new main axle made to proper tolerances. These team bikes also had the adjustable lower shock mount which actually was a good thing when I set its head angle in the end.

The original paint color I already had found with my Tunturi Kayapo project, so just went to the car paint shop with the previous paint code and this time I didn't have to scroll through all those bloody catalogues there!

The decals was another problem. Thankfully our own DH legend Matti Lehikoinen helped me out and located a set from the old Tunturi team manager. He had found an original decal set from his shelves where it had been for over 20 years! Unbelievable luck I had there.. Actually the team manager just dropped me an old Progression team bike for restoration which has the original Shimano HRB roller brakes on it, but that's another story.. 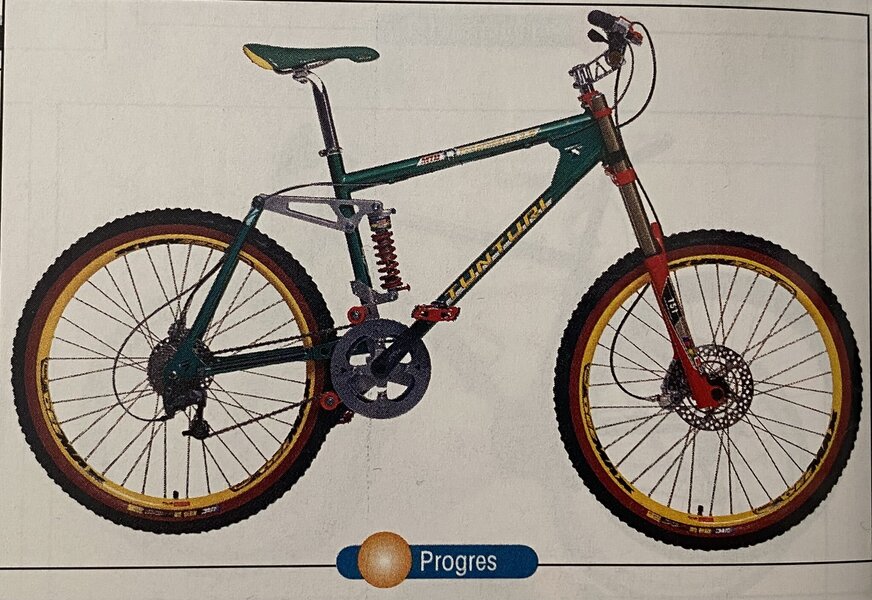 I happen to have old Finnish bike magazines from late 90's so I managed to find a picture of the bike in the spec it was offered to the public. This helped me a lot with the part search, and also chatting with the old Tunturi team riders, from which I for example got the original stem for it. I think the hardest part to source was the green/yellow Flite saddle which I eventually found from Sweden, but the guy didn't want to sell it as he liked the green color. So in order to get it I offered to replace it with a new green saddle, and ordered him some green saddle from some online fixie store

So after couple of years of locating the original catalog spec parts and slowly working on the frame and its pivots, I've reached my goal! It actually came out pretty nice and I'm pretty stoked to have brought back to life a part of Finnish bike industry legacy that has almost gotten forgotten during the years. 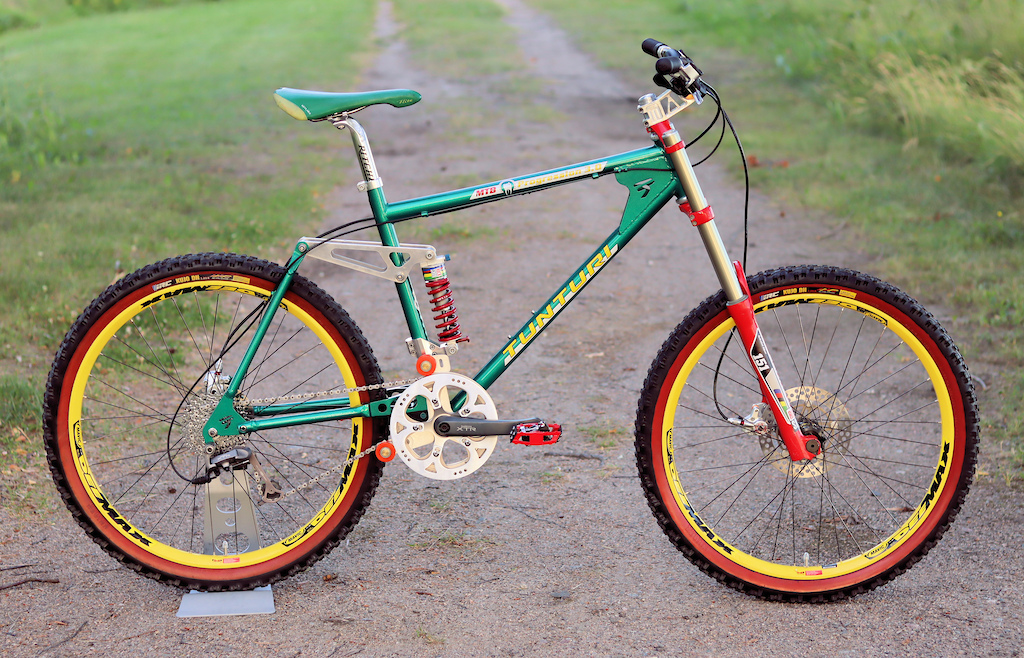 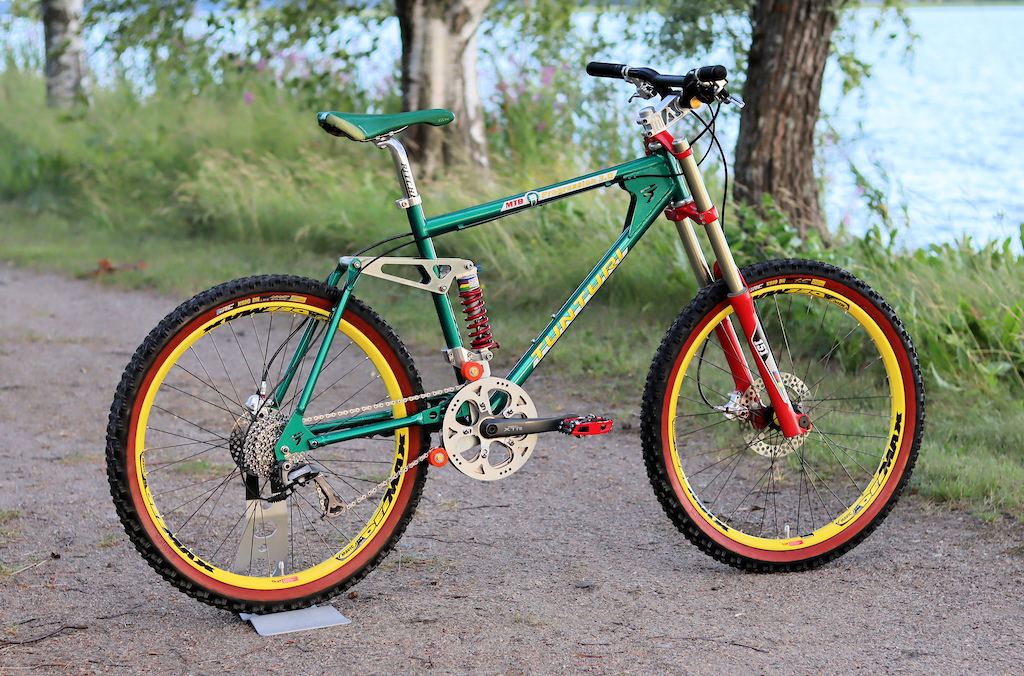 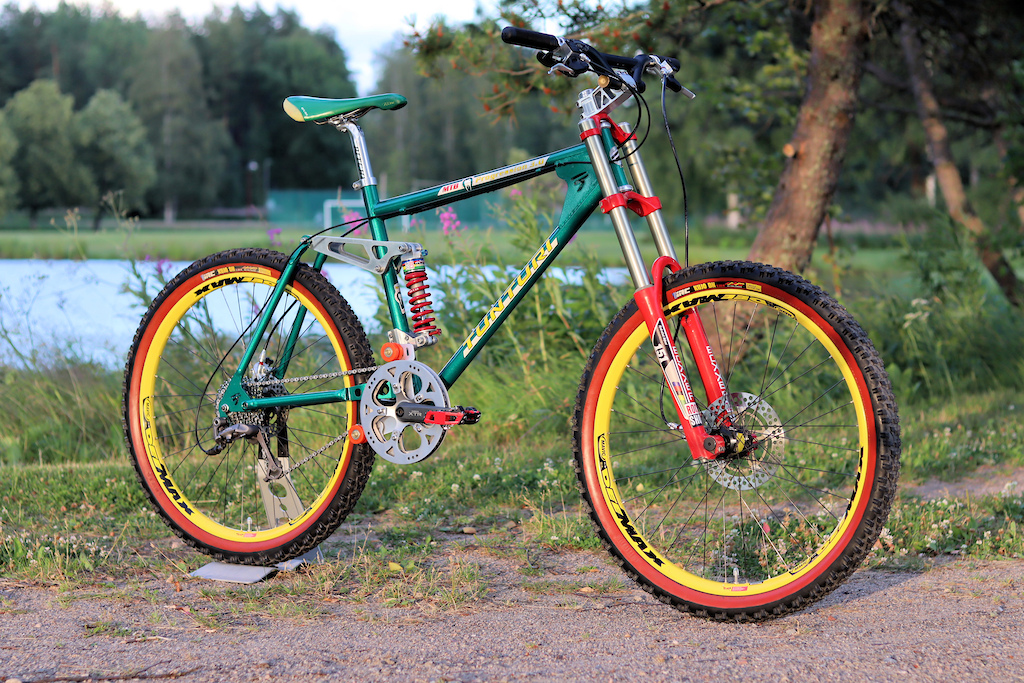 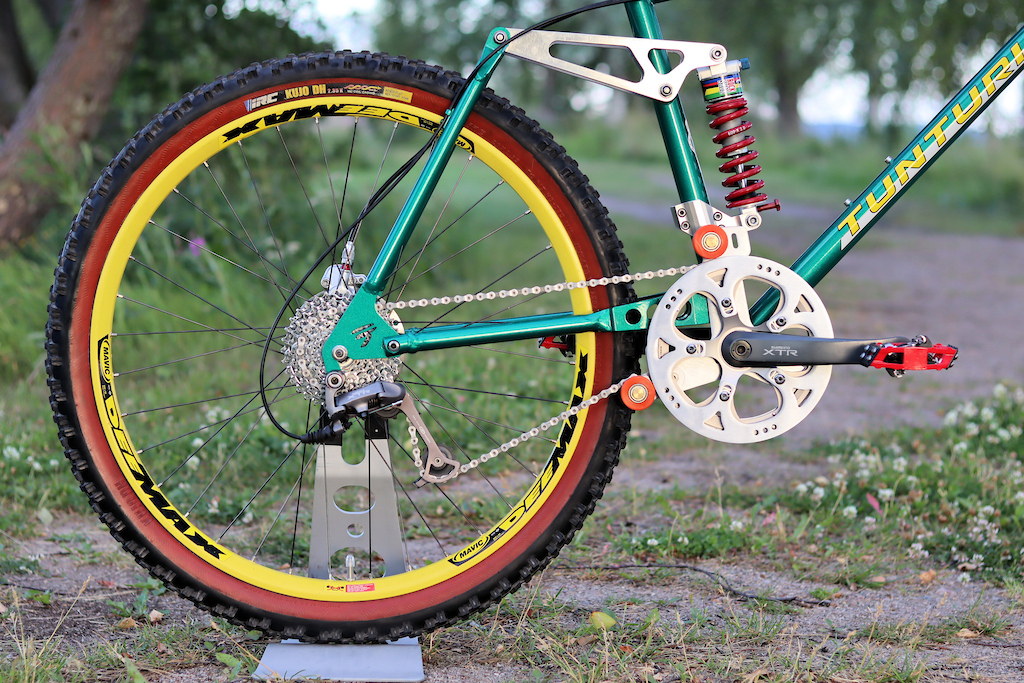 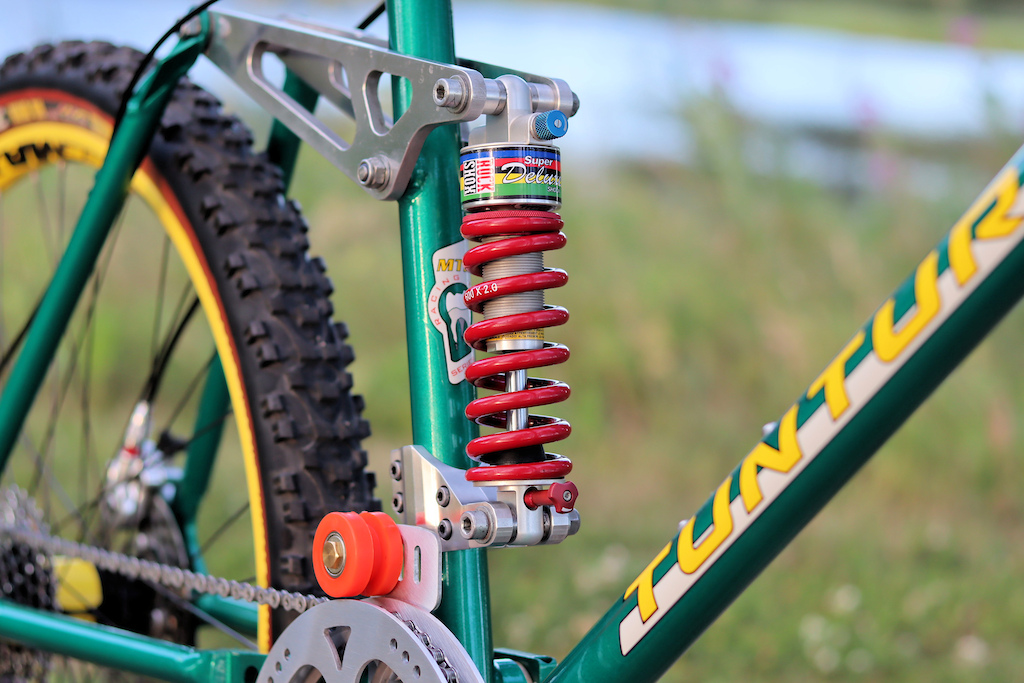 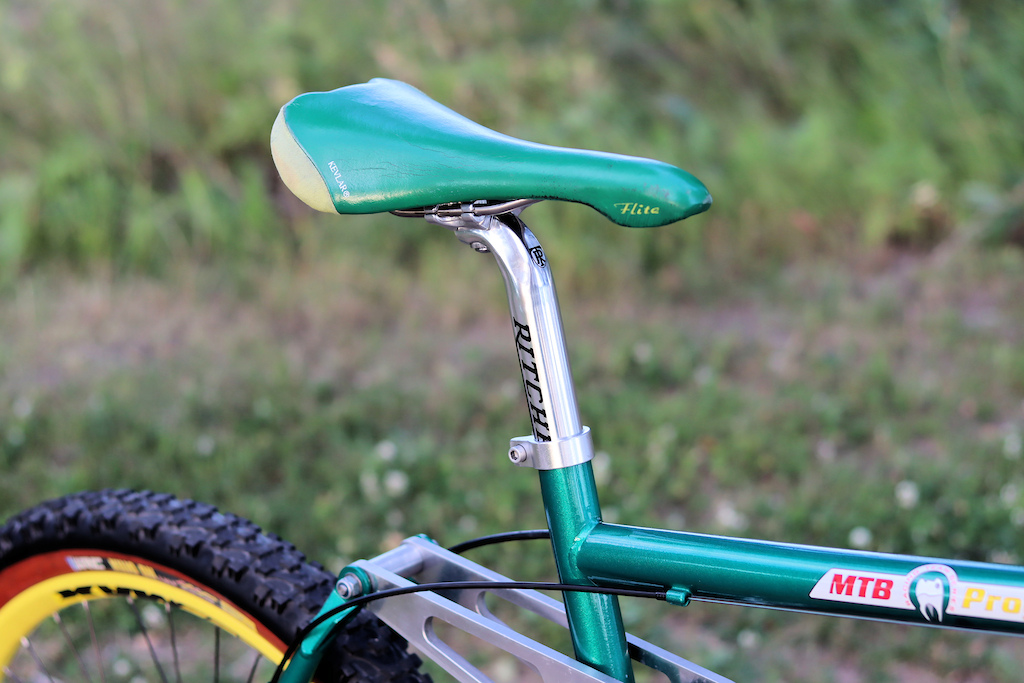 That turned out really well!
S

Well I did take it of course for a small spin on the near trails, but as it's a kind of cultural heritage for us Finns and only surviving individual in this state, I don't want to take it to the hills where it would belong. It may someday head for a museum or similar if we just get one here somewhere.

But the rear end with new axle, bronze bushings and grease felt soooo smooth that it also felt bad leaving it back to the garage!

Wow, that is stunning! Well done on bringing it back to life.

Great rescue and build. Have never seen one personally so thank you for sharing

Is this a true ex-ONCE Pro Team TT Bike Frame???