Following the launch of the Ti Raleigh Tdf 40th anniversary model last year it came to my attention that the majority of repainted Team Replica frames in the Iconic Ti Raleigh Team Livery of Red Black and Yellow had incorrect seat tube decals.
As a kid I always remember that the letters on the seat tube of my Raleigh Europa were racing forwards giving the impression it was traveling at speed whilst lent against the garden wall. The frames and bikes I have been looking at have the seat tube decal font too upright and have more in common with the font that appears on later 1985 Team Panasonic and other later Raleigh models. My fear was the the Original Iconic Ti Raleigh Livery was being watered down and incorrectly replicated and could be lost forever.I felt that action needed to be taken and contacted Steve at H Lloyd Cycles explaining the situation and he agreed that the issue needed to be rectified.
Armed with an original seat tube decal tracing from fellow Retrobiker AndyMart.. cheers Andy ☺ and the artwork skills from Retrobiker torqueless an alliance was formed. Over the preceding weeks torqueless would email me his latest seat tube decal which I would print out the correct size and apply it to whatever frame or bike I had available as a mock up. This would then be photographed and sent back to torqueless to be scrutinized and then discussed over the phone what adjustments were required. Several weeks, reams of A4 paper, printer cartridges and rolls of sellotape later a suitable candidate was created..code name 4321...it's birthday.
This new seat tube artwork was then sent to Steve at H Lloyd's to be recreated in vinyl. Working closely with Steve several copies were sent to me to mock up until the final version that we were happy with was made.. this is new seat tube decal appilled to my Raleigh Team Pro, the yellow and red is just print on paper to give the desired effect and the yellow letters are vinyl on a black paint without any lacquer.
Let us know what you think both positive and negative comments are welcome... and a big thank you to torqueless, AndyMart for their time and effort and to Steve at H Lloyd's for his time and patience... cheers VC. 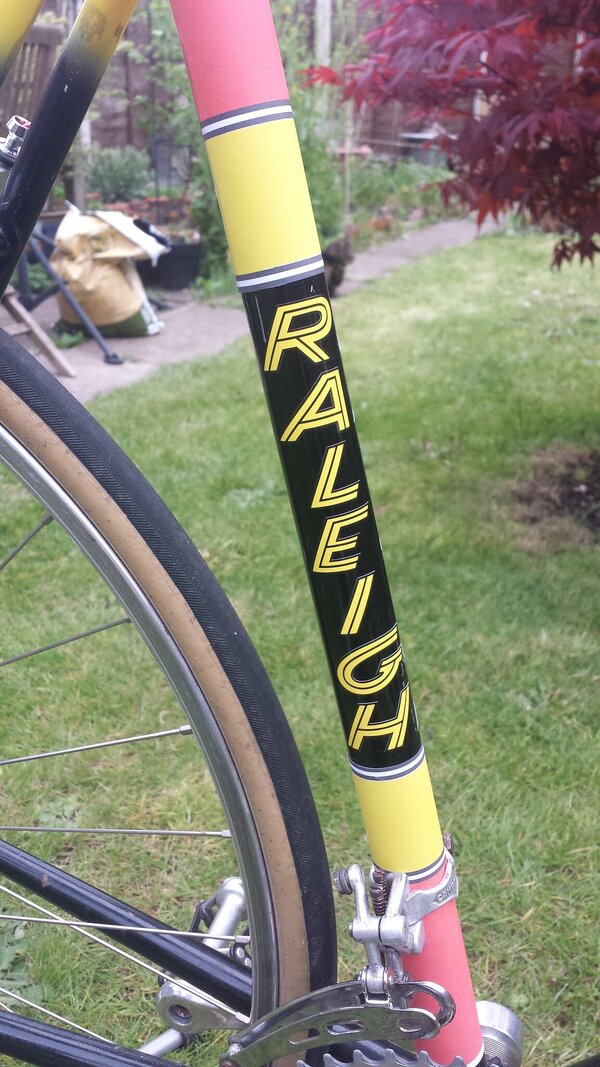 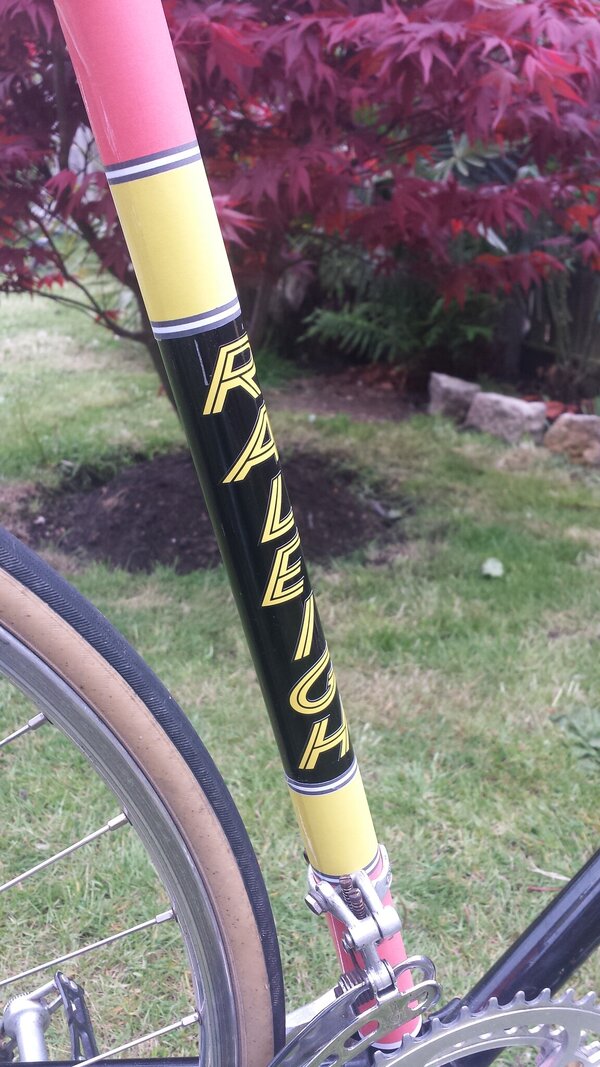 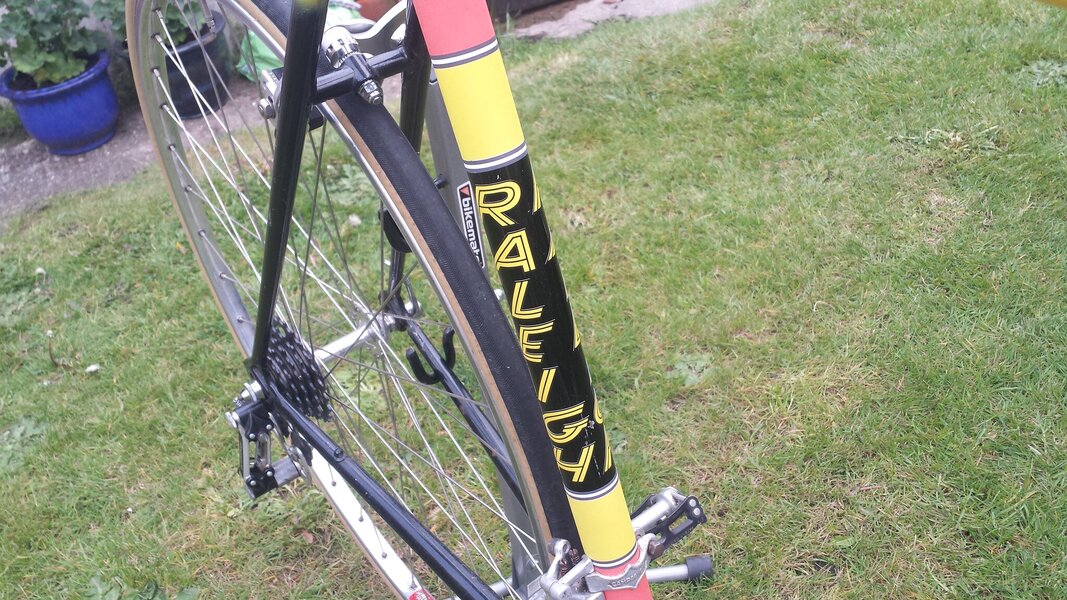 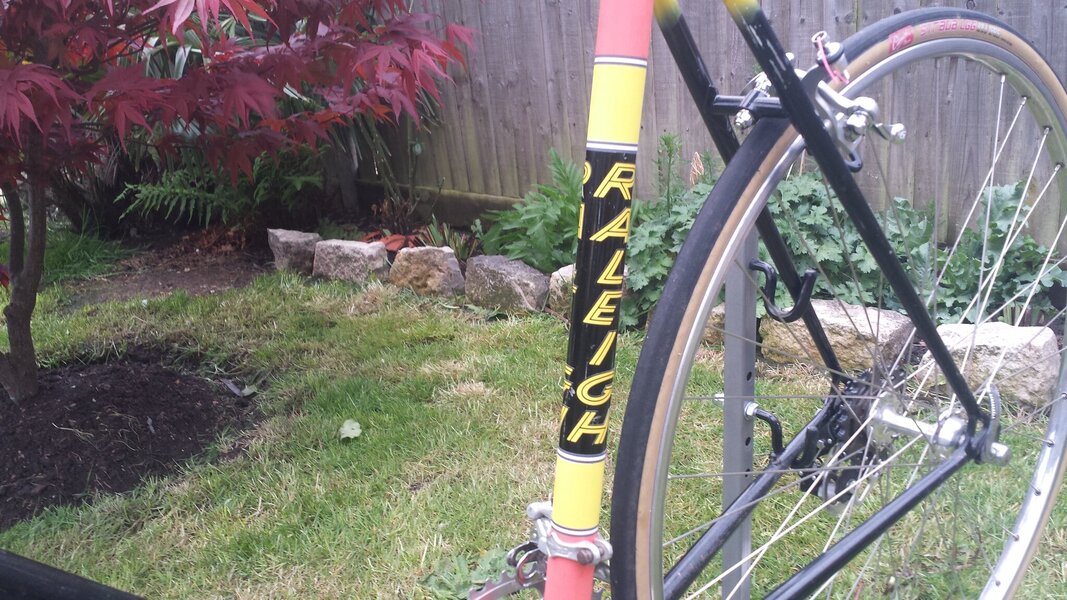 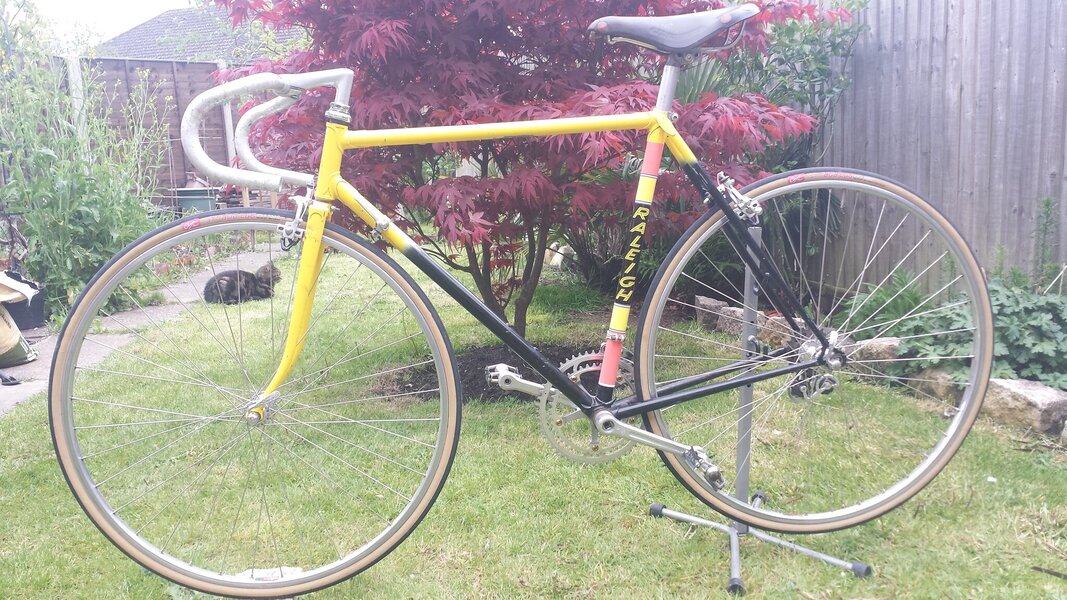 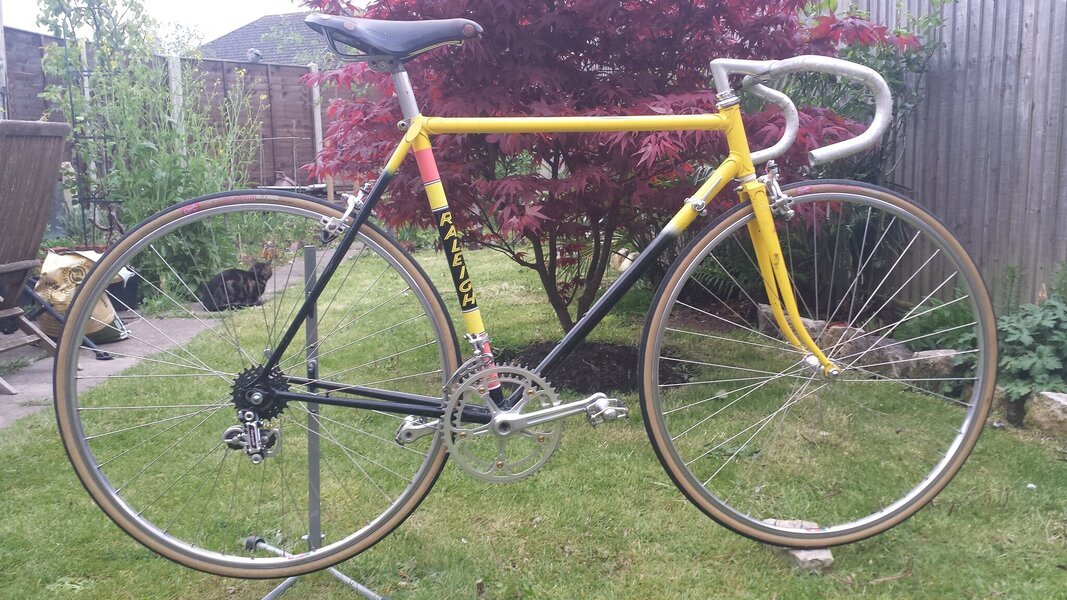 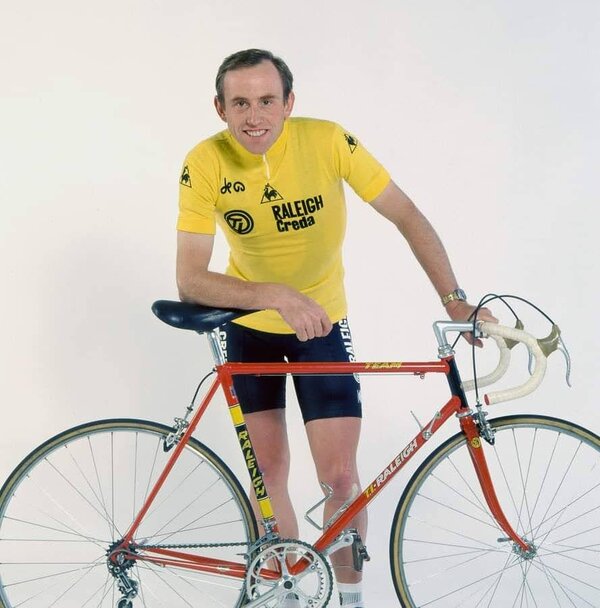 rBoTM Triple Crown
rBotM Winner
Superb. You and torqueless have put a massive effort into this, happy to of played a small part in it. I like you noticed the majority of refurbs had incorrect decals, but without your tenacious desire to put things right they probably would of stayed incorrect for a long time. The TI livery is tricky to replicate accurately as it evolved over the 9 years the team ran. Thanks to you and torqueless it'll now be a little easier to get it right.

I've been well and truly dragged into the 21st century on this gig, too. Started out with pencils, Indian ink and gouache. Then it went all computerised, first a raster version, and then a vector version... and if you've never heard of 'raster' and 'vector', or the difference between them, you're about where I was, a couple of months back.

We should probably also thank you AndyMart for getting our first version onto your frame, and apologise to you for the fact that it still wasn't quite right. Hopefully with this version we've ironed out any remaining glaring discrepancies between reproduction and original.
V

You soon got to grips with it torqueless

....the new graphics were coming to me fast and furious, I had a job trying to keep up getting them printed and stuck on my frame.. 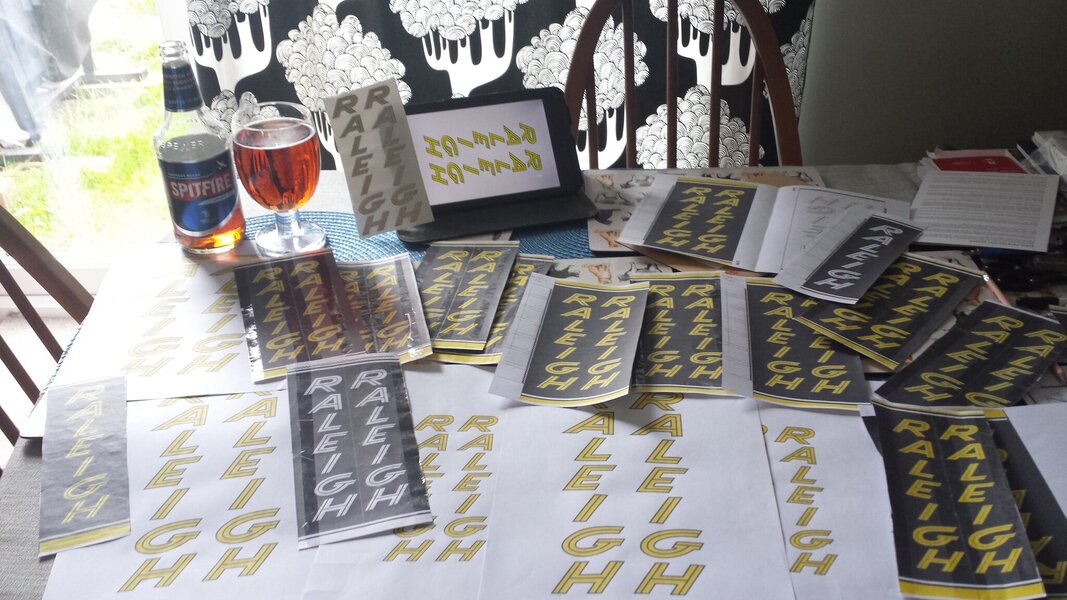 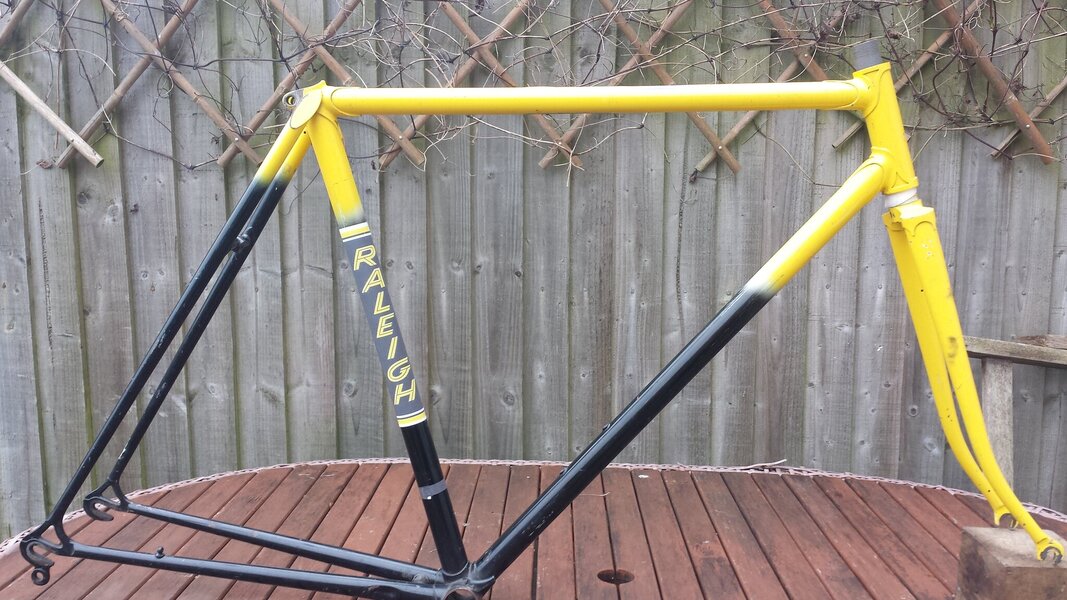 It's really great to see the new seat tube decal is making an impact on the retro bike scene with some superb restorations starting to pop up... 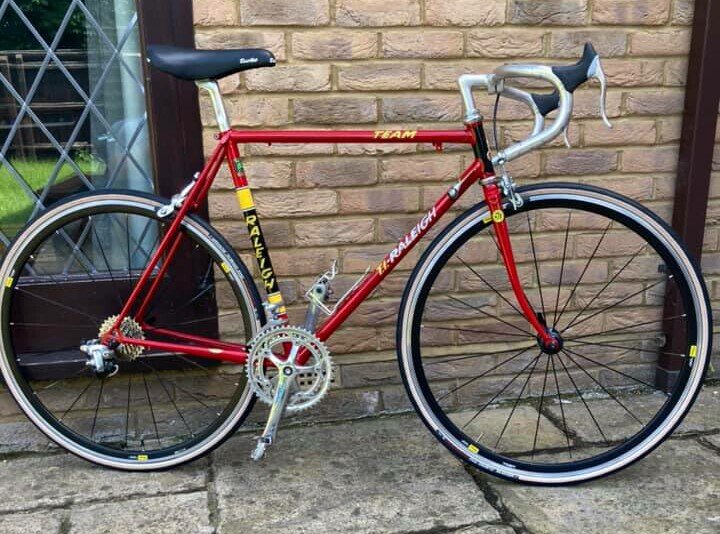 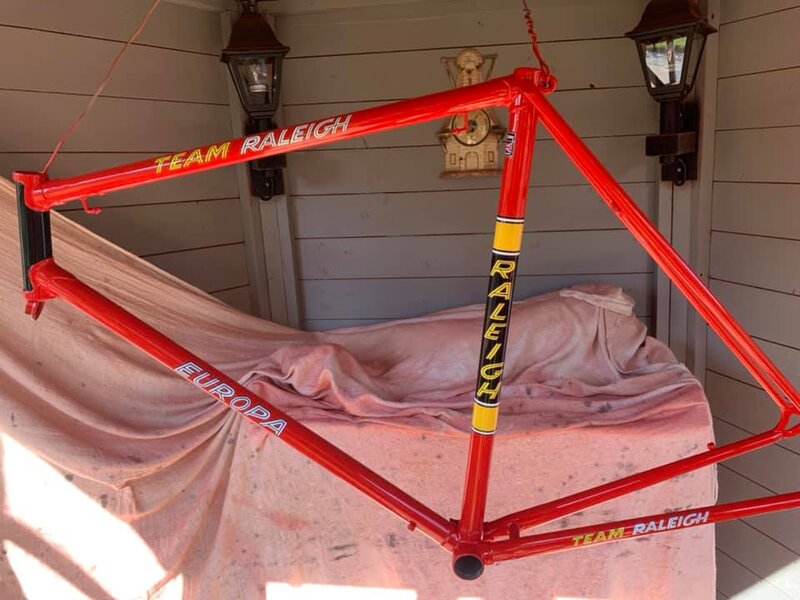 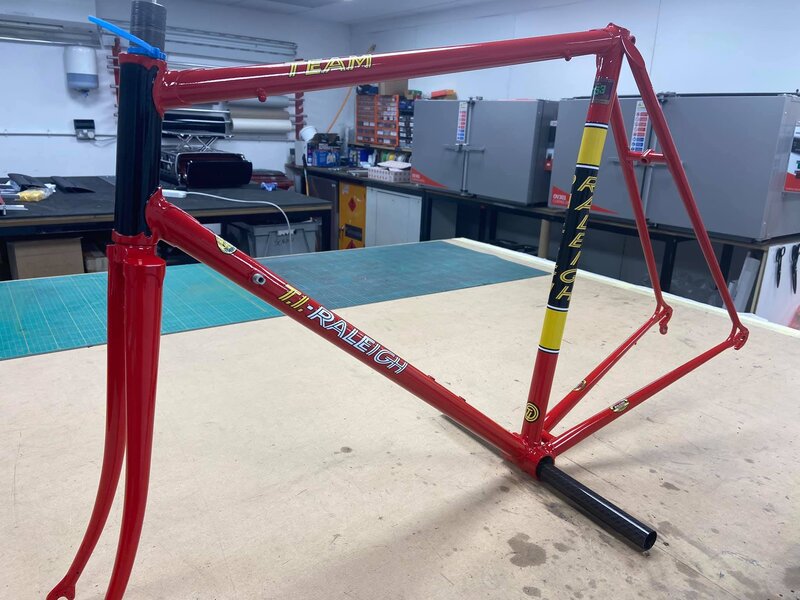 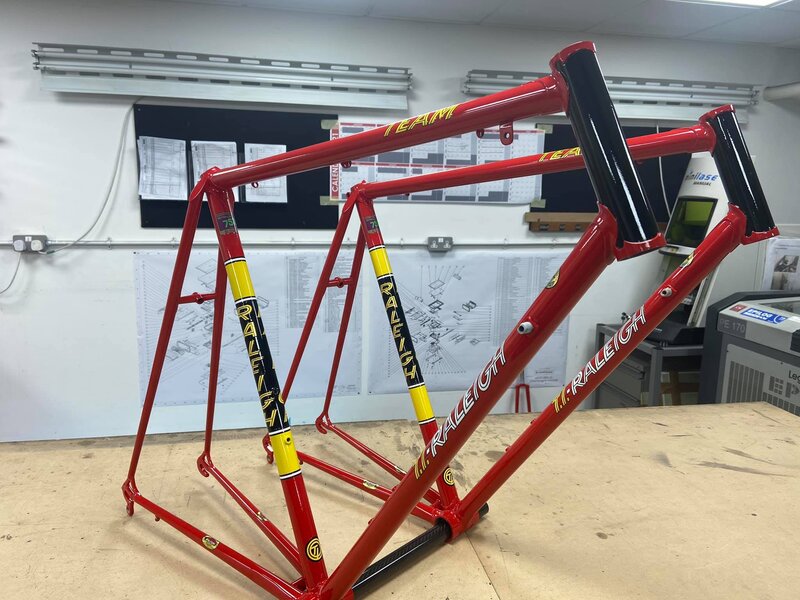 rBotM Winner
PoTM Winner
They look sweet
You must log in or register to reply here.