The long, slow build for the Lil' Lady

This is a slow burner this one.

As I guess many of you do too, I have kids. And probably also like you, I am keen to see my kids enjoying cycling as much as I did when I was young / do now.

For my boy when he was just starting ‘She’ insisted on making a hoo-har about ‘Santa bringing him his first bike because that’s what everyone should have’. Then when he was ready for a 14/16” wheeler ‘She’ insisted that the boy could choose his bike, and of course his choice was directed by the toys that came clipped to the back (in this case a nerf gun) rather than it being an actually good bike :facepalm:

In fairness, these abominations didn’t put him off and while he may not have been lighting up timing boards or pushing the boundaries of bravery (yet) he did alright. But at this point I started to leave ‘Her’ out of the equation. Happily, a friends’ lad had outgrown his 16” wheel Dawes Barracuda which was donated, great, one for home (the Dawes) and the Apollo could be kept at Grandmas – we visit a lot, it was worth it. The Dawes had an alloy frame to the Apollos pig iron, alloy rims, v brakes etc, not a bad bike really. The boy saw the benefits too and preferred the Dawes.

When he was lined up for a 20” wheeler I took matters into my own hands again and before 'She' could interfere I picked up a Kona Makena locally for not much money, gave it a once over and when the time came, off he went. Now he was really starting to pedal.

Then he grew again. Barely a year later he was looking ungainly on the Kona, so we started planning the next step up to 24” wheels. Now as he was a bit older I included him in the process – see <here> for more on that project.

But anyway, back to business. The younger of the offspring is more of the girly variety, She is only just starting out on her bike, and as befits younger siblings, she's gonna get the hand-me-downs. For the kiddy sizes this will be fine, the 12” wheels are a sort of unisex zoo animals theme that these young’uns apparently enjoy. For 16” we have the Dawes and 20” the Kona, both in a non-gender specific colour so ‘She’ can’t argue.

But when we get to the next step, probably 24” wheels again, what to do? I’ll tell you what we do – Dad takes over and makes something ace, that’s what happens!

And with barely 4 years to get ready (and given my slow project progress history) I’d better get started.

First step – frame.
This is what started the journey. Late last year this was offered for sale and I thought why the hell not.

Handmade by Caygill in 2001 of extra light Icaro aluminium it has some really nice flutes down the down tube and is finished in a vibrant ‘Lampre pink’. Measuring just 13” c-c and with a 19.5” toptube its really spot on for a smaller rider. The bare frame weighs in at 1500g (or about 3.3lbs if you prefer) so it should be a nice light nimble chassis to start from.

The frame was made to fit the Marzocchi Bomber Z4 forks which came with the frame, nice air forks and not too heavy at ~1.7kg. Other parts included in the pack were a seatpost, clamp, cage, stem, bar, FSA headset, and a ladies saddle. That should make life easier.

First impressions were, in all honesty, mixed. The frame was indeed light and ‘not bad’ with no dents dings or cracks, but there are scuff marks and touch-ups all over. Not too bad but, well, good enough? I’m still working that one out. But I decided to go with it and I'm starting putting ideas together.

The frame is designed for 26” wheels, I want to run 24” wheels (at least initially), so options for the rear brake are find v brakes with lots of adjustment, or a disc conversion. I lean towards discs over rim brakes anyway, plus in this instance when the time comes to move up to a 26” wheel with discs it should be easy as pie. I have thought about taking it to a frame builder to have disc tabs stuck on the back. That would also lead down the road of fresh paint so while it’s the ideal solution to both fix modern brakes and to sort out the scratched paintwork it’s too much £££ for right now.

But I reckon I can bolt an aftermarket disc adapter on there. Some options:

1) <£5 online, bolt around the frame, job done. Not pretty but cheap, light and simple.


2) From the parts bin, the Hope torque arm brace to the canti stud adapter thing. Job done, if it will fit (not sure I have all the parts). So long as it fits outside the droupout all is easy, if it has to fit inside the dropout then I’m into funny hub territory (130mm road disc hub perhaps?).


3) From the parts bin, the good old A2Z DM-UNI, around £25 online, bit sturdier than option 1 and might fit. Not sure if the dropouts are flat enough though.


And secret option 4) the wildcard: hub brake – it would make for a tidy rear end. Sturmney Archer X-RDC is ~£50 and 950g (according to SA, 1.2kg according to SJS Cycles), so maybe not far off the same weight as a normal hub plus a set of V brakes. More, but not a lot more.


Or maybe go even further, gears and brakes all inside, no derailleur to damage, no cantilevers or disc rotors to get messed up. But examples I have seen like the Sturmney X-RD8 is 8sp, 2.3kg (according to SA, 2.6 according to SJS) and £180 so appears both more expensive and heavier than normal derailleur gears.


Shimano do Nexus 8sp with coaster brake for more like £100 but still right heavy at 1.7kg, the Alfine options look to be gears only not incorporating an internal brake so sort of pointless here, which is a shame as they look much smarter.

So, internal hub brake, call it Plan C perhaps but it’s got me thinking.

Here’s the best pic I have of my hope setup. As you can see it has to go on the inside unfortunately but works well 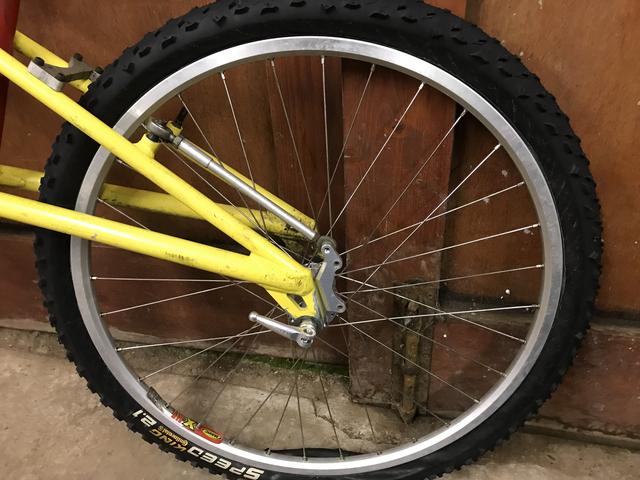 I can get some better pics over the weekend if it helps.

You are missing some bits too, there is a part that bolts to the dropout that is effectively moving the drop out inwards to match the short axle and obviously you need a hub with the correct axle.

Thanks for the info, so the torque arm thing would require a shorter hub and really a longer axle . Dang.

I have seen some kits available online which mention adapter spacers so perhaps it's a normal hub with a smaller spacer on the NDS. Sounds faffy.
T

Not quite rick, other way around. Standard hub (bulb/xc) short axle and end cap.

Hang on, I'm confused. My thought was:

Assume it's a standard 135mm dropout frame, and the adapter thing fits inside, then the length of the axle needs to be 'normal' to slot into the dropouts, qr the standard length etc. since the total external measurement is unchanged.
But with the bracket reducing the internal distance between the dropouts the hub itself needs to be slightly narrower - If the alloy bracket is 5mm the distance between the lock nuts on the axle need to be reduced by 5mm to fit in the narrower gap, now 130mm. It looks like that could be achieved by using a thinner spacer on the NDS. Maybe.

My first thought was perhaps use a road hub body and gubbins designed for a 130mm frame but with a slightly longer axle to make sure there's enough axle in the NDS dropout. A hybrid of 135mm mtb axle and 130mm road gubbins. Not sure whether that would work though.

Maybe I'm over thinking it. And it's likely I've missed something critical.

Ok so as far as I understand it (I bought mine complete with wheels) you can use any xc hub (and I believe bulb as well) you just replace the axle and nds end cap with the 1 specifically for the torque arm. The new end cap then located in the special hollow part (that you are missing) that you bolt into the dropout that also clamps and locates the actual disc mount.

It actually works really well once it’s set up. The only difference being you have to take the skewer out to take the wheel out as it goes through the torque arm clamp.

Hope that makes sense, sorry I cannot take any pics as I’m not where the bike is. If you google pics of hope torque arm you can see what I’m talking about.

Thanks for all the info, really helpful. If I don't have the parts the brace/arm device is not a great option then it sounds.

That then leave options as bolt-on disc mount adapter thing, frame mod or go in-hub.
Think I'll default to a bolt-on badge for now as plan A while I investigate in-hub options a bit more.
A

There's a lot to be said for hub gears + brakes, especially for people who aren't interested in regular cleaning and maintenance (making assumptions there, but only a very few nutters really enjoy cleaning and maintaining bicycle drivetrains and they don't tend to be young girls!) I doubt the extra weight would really make all that much difference when actually riding and it would certainly make things simpler for you too...
You must log in or register to reply here.