I think only the Japanese are mad enough to do this. I love the insight it gives in Surly's designs. Question is; is it a clever way to build a robust do anything frame, or are they indeed overpriced basic bicycles?
G

I like Surly. I had a Crosscheck which was a great bike, if heavy. I do feel they are overpriced for basic chrome moly though.

grantoury said:
I think only the Japanese are mad enough to do this. I love the insight it gives in Surly's designs. Question is; is it a clever way to build a robust do anything frame, or are they indeed overpriced basic bicycles?
Click to expand...

Pressed the cc feature hoping the auto translate would work but my god that was so confusing I was starting to wonder if it'd be quicker learning Japanese to deduce what the person is trying to say.

Translated the comments and only point I agreed with was the nutters insistence on using gloves with using the cutter. No thank you.

Anyhow, like I said the other night while getting drunk, I don't really think Surly has invented anything particularly unique, I'm not sure there's anything particularly unique about the tubing either. Also, I don't disagree with the point that they're basic - they're meant to be simple and versatile, and that they are. They have a good selection of bikes, with quite varied geometry, and they ride nicely. They wouldn't have the following they do if they didn't have something, that's not to say that they aren't overpriced. For me the ability ride steel that actually can accommodate wide tyres and that is bikepacking friendly is a huge bonus. Also, I like their bars a lot. Any current companies still pushing steel is real are good in my book. But yes, they should be cheaper. They used to be as well.
G

I think you hit the nail on the head Imlach, they are useful, versatile and cool, but pricey. A good company
M

rBotM Winner
I'm having a beer ...Mr Winfield my lathe has just surprised me

With a kernackered arf nut it's just done this to an offcut of thinwall seat post tubing....3.5 inches hanging out the chuck ....a bit of fettling I think it'll do quite a bit better. Not bad for a 75 year old 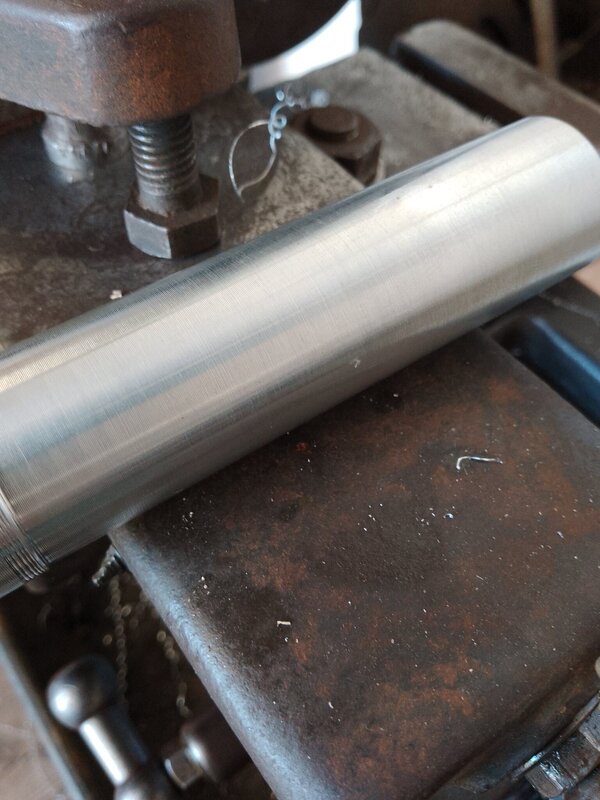 I like the Midnight Special, a road bike geo with space for 2.35 tyre. You gotta love that. The price I think is too high. But most comparable stuff is even more expensive..

Imlach, as a self confessed Surly fan-boy and head-barman, you are showing an incredible amount of tolerance and restraint.

Have you not thought about banning us, only serving water after the soap you forced fed us, or simply slapping +20% on our favourite drink?

Woz said:
Imlach, as a self confessed Surly fan-boy and head-barman, you are showing an incredible amount of tolerance and restraint.

Have you not thought about banning us, only serving water after the soap you forced fed us, or simply slapping +20% on our favourite drink?
Click to expand...

I love Surly, but I admit a lot of it is branding and that's partly what got me so into them years ago, where I just didn't have the funds. I have since milked the beer money tin dry to fund them. But I'd hate to be the kind of person that says you can't get something equally or better by buying good old retro steel. I'm excited about the wild thing I just bought, as I've heard many fine things about Tange Ultimate. I've got an Explosif thats Columbus Max, I believe that is what its called? It's got that spinner knock off fork you sold me some time ago. That bike rides nicely but it still doesn't come close to the experience I have on the Surly bikes, but I think it boils down to better fit and good geometry more so than materials.

If there is one thing I don't like it's people that can't have a sober argument about bikes while drunk.

Also I'm with everyone that the prices should go down, especially when you compare it with Salsa MTBs that supposedly uses more responsive, less dull, higher grade tubing but often end up cheaper than Surly's (they're all owned by the same folks in the end though aren't they?)

But keep in mind, Surly often makes remarks about beer and they sell hipflasks which appeals to a person that thinks beer goggles should be on prescription lenses at Specsavers. Also I've yet to meet a Surly rider that hates their bike, unless they're just pulling that big lump of steel around because they didn't want to lose face after selling the house to afford the bloody thing.

I'll consider the 20 percent addition to all drinks though, these drunken night ebay surfs are taking its toll and you all deserve to feel it

'Tis the communal drink thread after all, we suffer in solidarity
You must log in or register to reply here.

N
One of the Best Bike Related Ads I've Ever Seen