:: Date: Thursday 27th December 2012
:: Distance/time: 18 miles or so spread out over a day's riding with plenty of fuel stops and banter. Several short cut options available too.
:: Meeting at: Birches Valley Car Park, Cannock Chase. Please arrive by 10 a.m. for a 10.30 a.m. start.
:: Directions: Postcode: WS15 2UQ
:: Terrain: Forest trails, mainly man made.
:: Route: The morning will be the 'Monkey Trail', and after a stop for food we may head off for some more riding and perhaps a bit of off piste stuff. 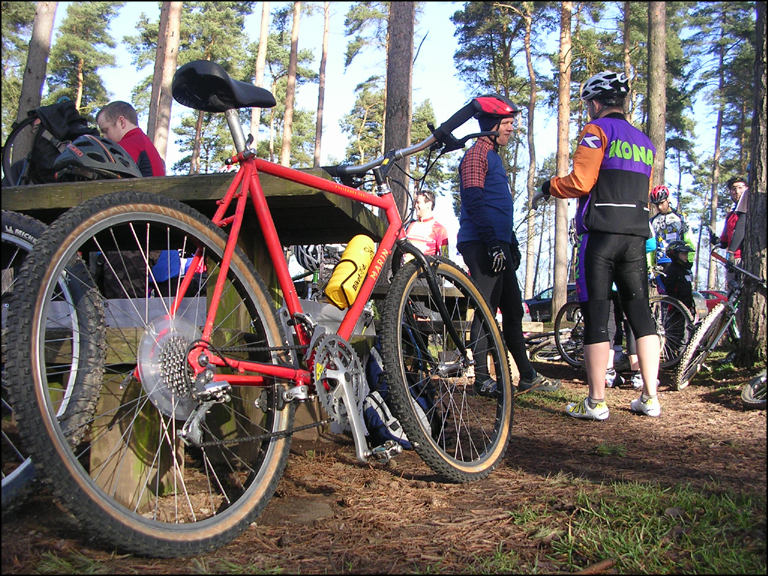 It's the day after Boxing Day and you'll no doubt still be bitterly disappointed about the lack of NOS XTR M900 in your Xmas stocking. You'll probably want to drown your sorrows in fizzy beer and consume your own body weight in mince pies and mulled wine.
If so, snap out of it!
This will be the perfect opportunity to escape from the Xmas food fest and shed a pound or two in the Cannockshire mud.

This ride has attracted nearly 50 riders in the past so it's a great place to put some faces to those forum names.

After some riding there will be a fine selection of mulled wine, mince pies and maybe some fine ale.
There will also probably be a bit of a cycle jumble going on after the ride, so bring along any bits you want to swap, sell or give away as part of the festivities.

The winners and runners up in the Retrobike National Series will also be announced after the ride.

There will probably be a few people keen to get there for an 8am 'early bird' ride. For the rest it's a 10am meet up with a 10:30am ride start.

It just wouldn't be Christmas without it. :xmas-cool:

I'm expecting a surge of festive enthusiasm for this ride in about a week or so.

If anyone want to share drive from south east , i ll be there .
M

Hi. One more definite. Not been out since the Long Mynd. Need to work off more than just Christmas mince pies.
B

Marked on the calendar, just got to get a bike in shape...probably self as well.

Retrobike Rider
I'm a no this year

Just me riding this year, although I suspect the entire rabble may show up with the usual short walk/massive picnic itinerary!

Somebody needs to buy my front wheel this year!

Actually, my random front wheel may well be in the running for the National series, think it only missed one round, it camped at at least two or three...