Again time to continue one of the projects I've held waiting in the garage. It's a 1997 Schwinn Straight 6 with the bassboat blue paint theme. Most of these that I've seen have the red/gold theme so I don't know if they made fewer of these blue ones, or if the blue ones have just cracked and failed during the years (as has this one also..) :cry:

I've always had a soft spot for Yeti DH6, but as they have been out of my range due to their prices, I was happy to find this one quite cheap from US. For reference I just saw one DH6 frame sold last winter for almost 1000$ with a crack in it! And after Schwinn bought Yeti back in the days, they were making the Straight 6's and DH6's side by side, and they are identical down to serial number format, only paintjobs separating them.

Unfortunately when I was cut'n polishing the lacquer on this one, I also found a small crack on it's headtube.. No blame on the seller, he hadn't noticed it either, but it got me thinking what to do with the frame. One option would be to replace/repair the headtube, but then again reproducing that awesome bassboat blue paint scheme wouldn't be an easy task. So for now I'm gonna build it up and not use it as it's meant to be used, in other words just use it for cruising with the kids. Currently the crack continues from top to the edge of the machined part of the headtube and stops there.

Already got the rear end finished to a bit better polish and also refreshed the lacquer on the bassboat blue. Attached also new decals for it which were made based on the really worn original ones.

I have most of the parts for her already, but I have to do an overhaul (and brake arch painting) for the Judy DHO plus some other small jobs. I'll keep you posted! 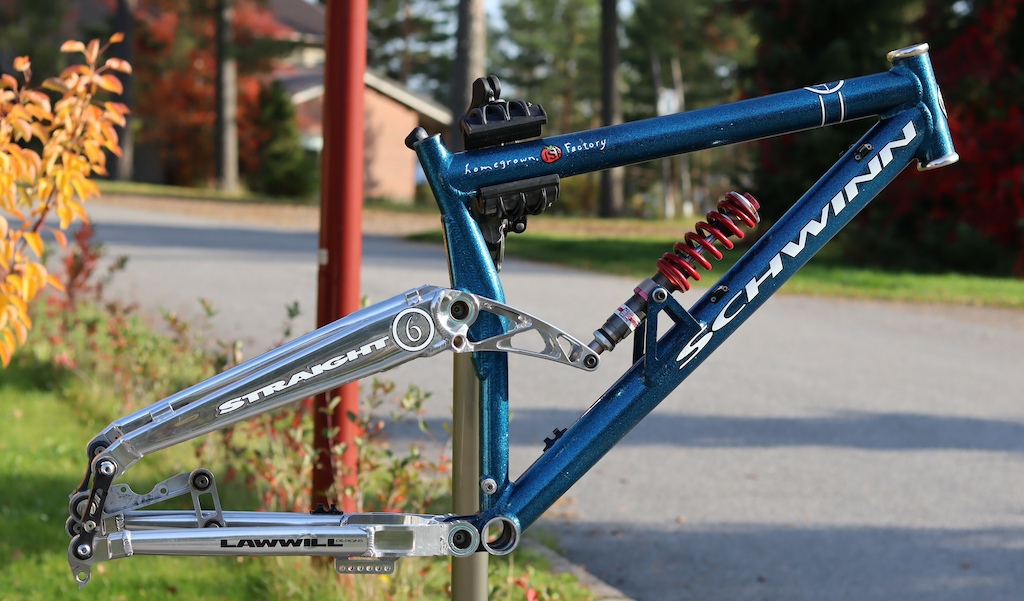 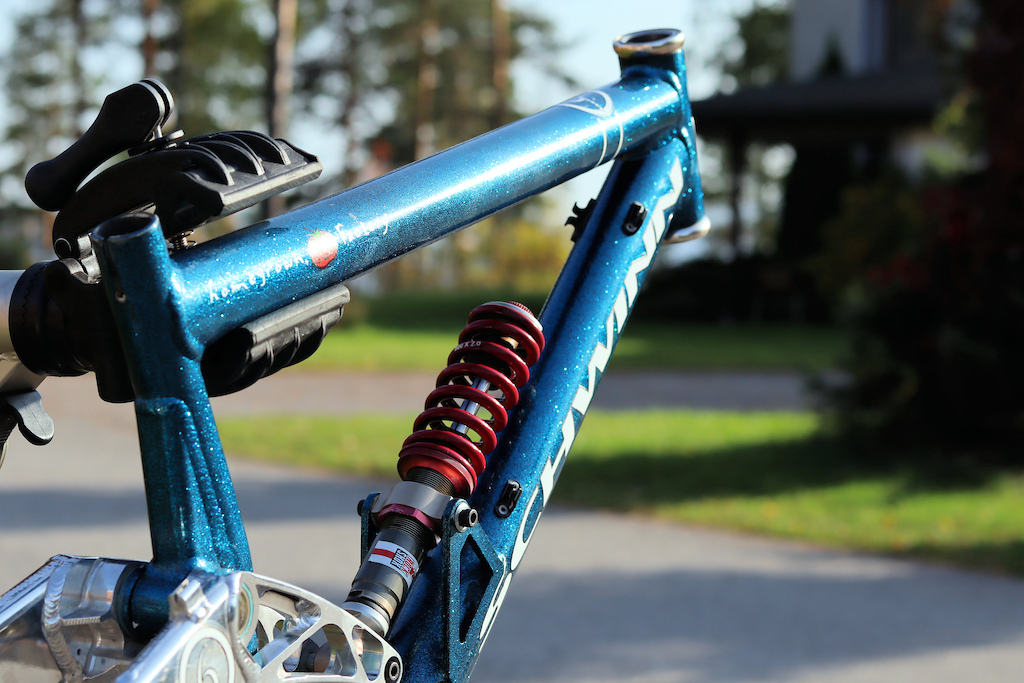 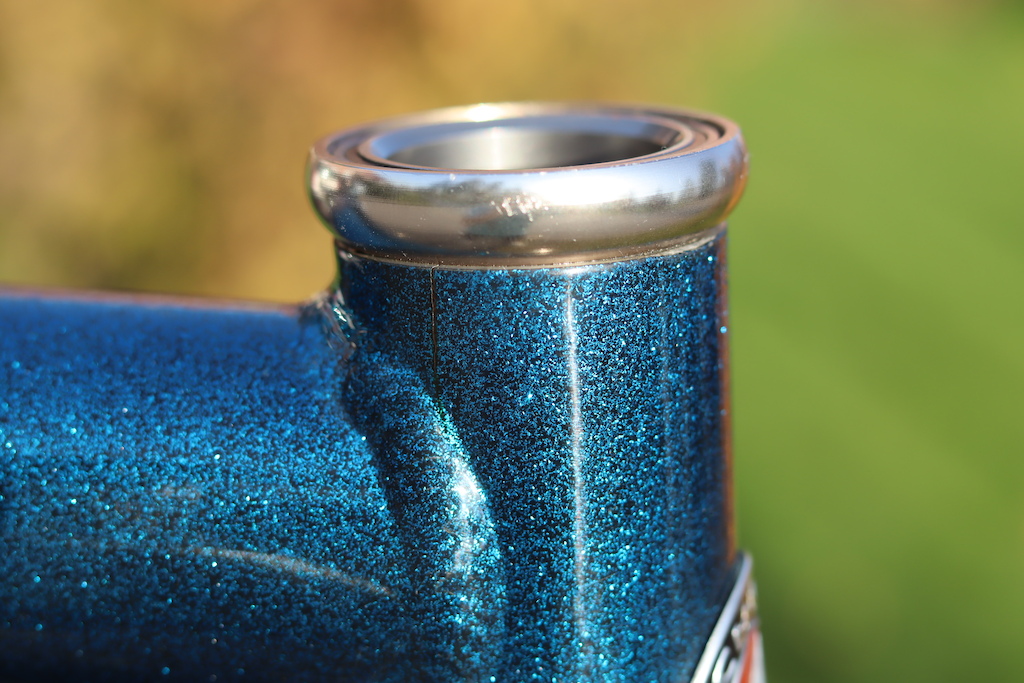 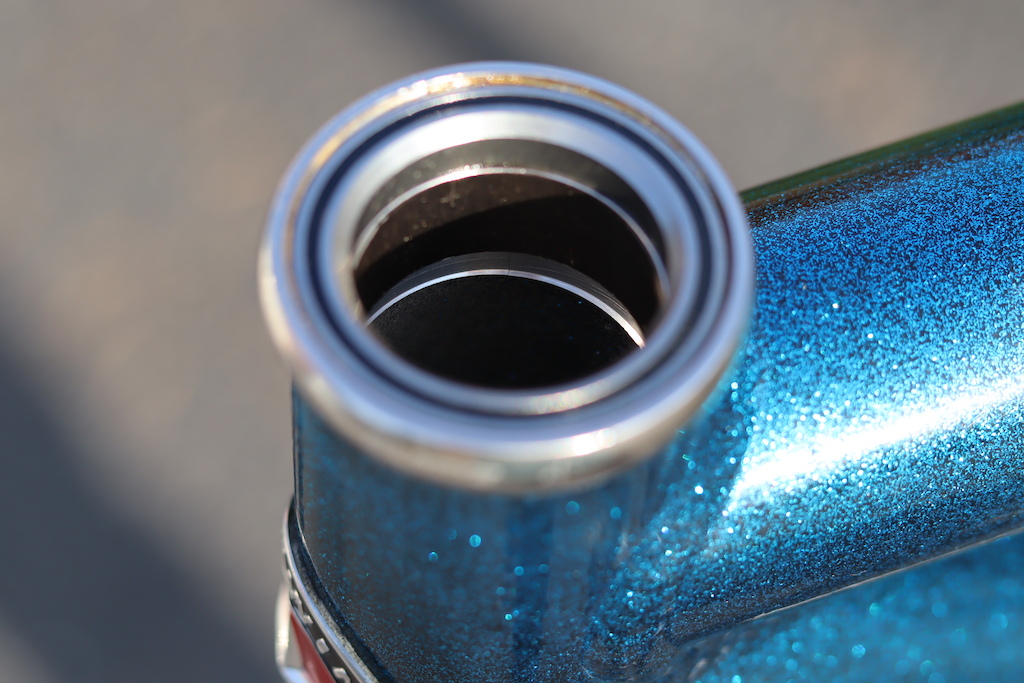 You could repair the crack and paint as a Yeti ;-)

Maybe you should drill a little hole at the end of the crack to stop it advancing?

Yeti paint has crossed my mind also, one guy in Germany is currently having his DH6 painted and he said Gil would even have ready decal set for it. But for now I think I'm gonna build it up like that and maybe later do the proper repair and possible new paint. This just because it feels like these bassboat blues seem to be even rarer that DH6's (just my own feeling based on what I've seen around the forums) so it would feel bad to destroy such a beautiful paintjob and a piece of Yeti/Schwinn history.

Good point, the drilling could be a good temporary solution with maybe some small collar on the top part of the headtube?

I think that it would be a disservice to that frame, and mtb history in general, to turn it into a yeti with paint. I will not weigh in on wether it was made by Yeti or not, an entire section of the internet has been deducted to that discussion, but in my opinion in no way is lessened by the Schwinn name. The bassboat paint is spectacular, and the Homegrown story is a really cool one. Either way, it is an excellent bike, yours to do with as you please.

Here is some information about the bassboat theme

Thanks for the good link! I definitely agree with you there, the bassboat paint looks really awesome. The paintjob itself is one main reason the Yeti paint has been one option in the future, as after the potential repair the bassboat blue would be extremely hard to replicate and Yeti colors are pretty straightforward colors.

But as I said, for now I’m gonna keep it cracked and with its original bassboat paint scheme.

Love it!
Such iconic frames, looking forward to seeing the build.

Had some time on my hands on Sunday so decided to finally tackle the Judy DHO overhaul. Took me almost a year to bump into those softer yellow springs and missing dust boots. The cartridge seals were still easily available so I just cleaned everything, replaced the end lip seals and adjustment screw o-rings on both cartridges and put in fresh motorex 7.5W. Also installed new decals for the lowers. Still got to have the brake arch painted, which had bad oxidation under the original paint, and then it will be ready to go on the Schwinn! 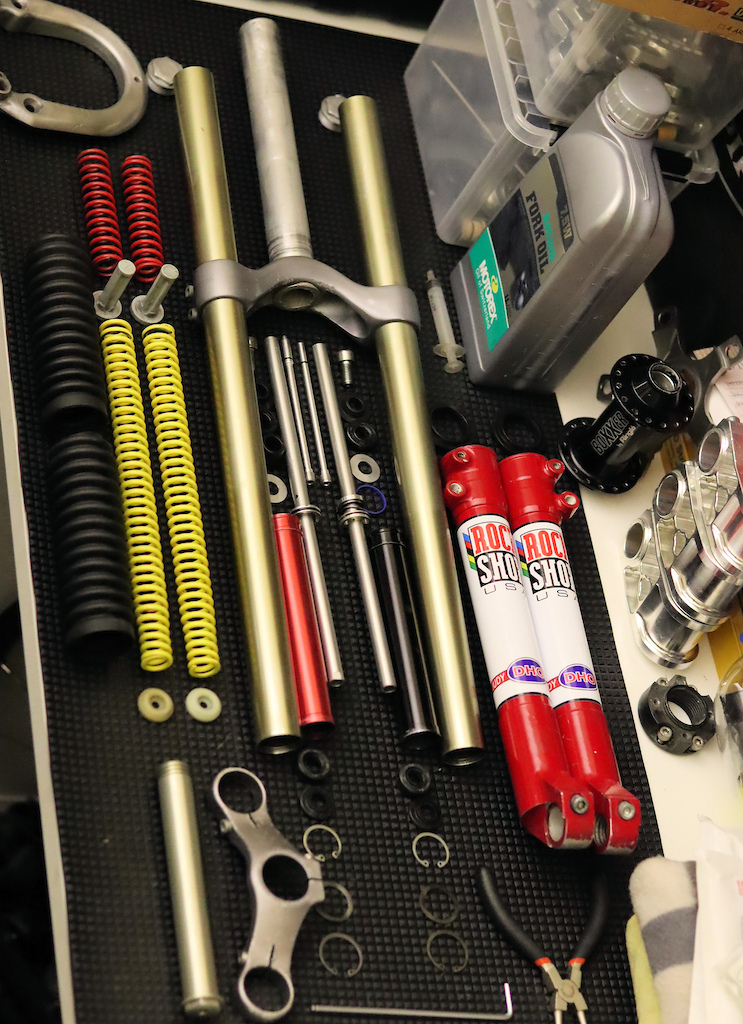 Still have a bunch to do, but couldn't resist putting the bike partly together and seeing how it will turn out. Still missing the brake arch, brakes and other small pieces. I have the brakes ready though (Hope C2), but need to go through them first.

I think the hardest parts to source would have been the missing chain guide, but thankfully there's a great guy in Germany, Marco, who produced a small reproduction set of these made based on the original ones as he also needed them for his Yeti DH6 project. I think he still has some for sale if somebody else is looking for them! 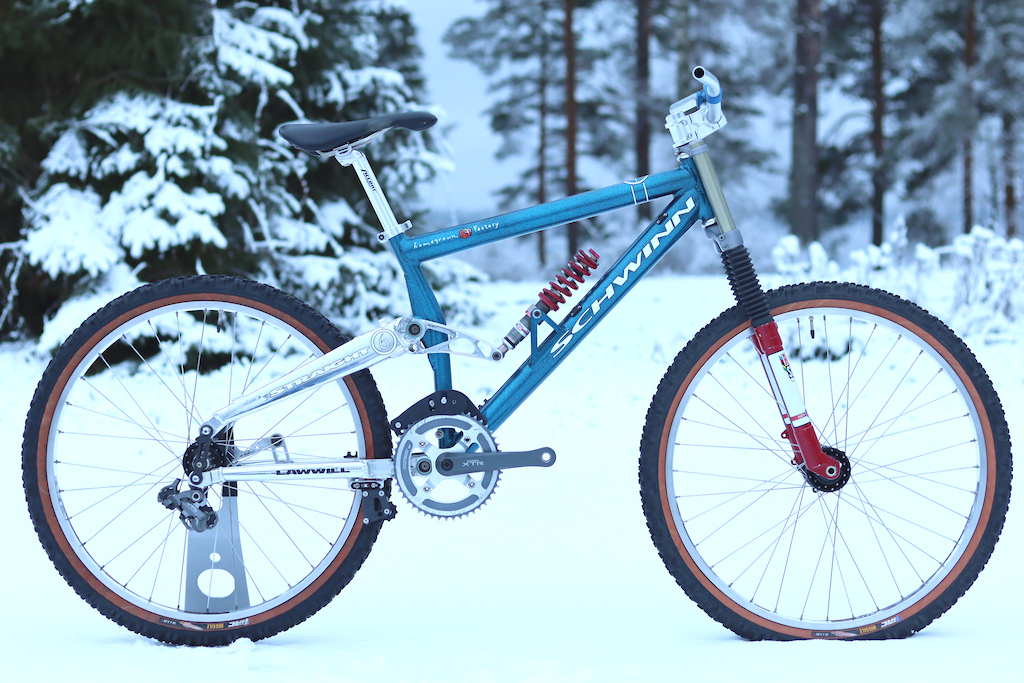 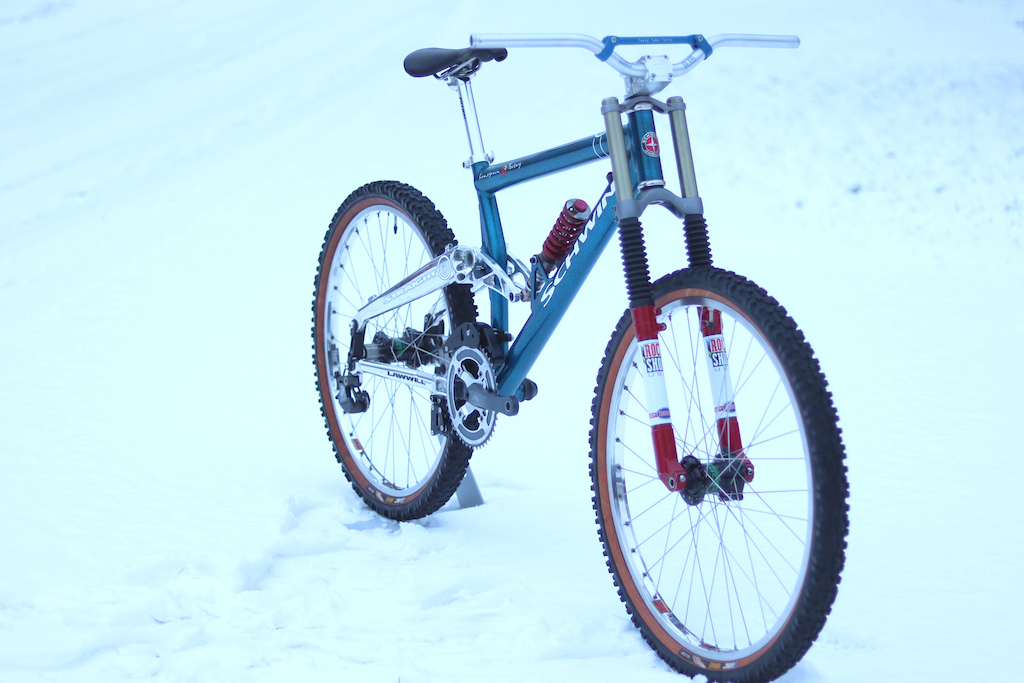 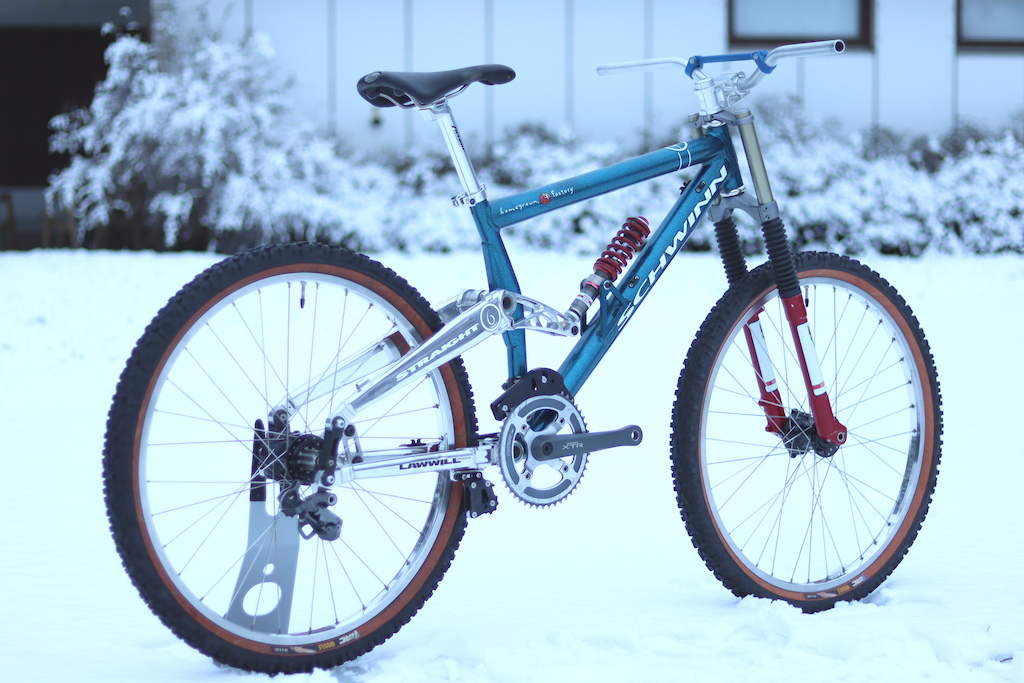 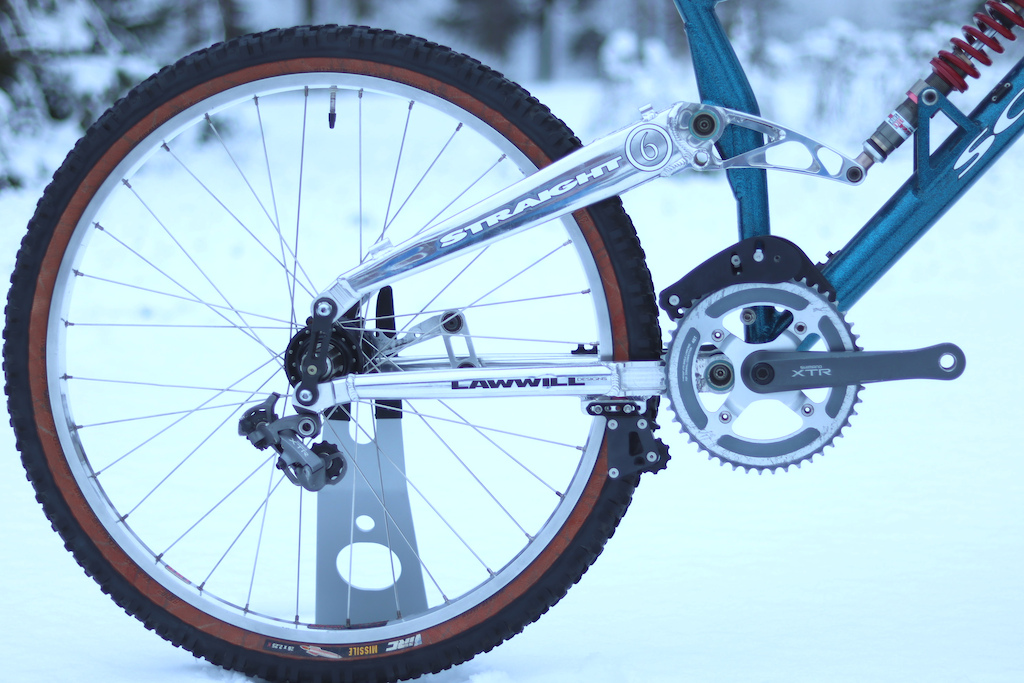 Beautiful! Looks great in the snow too.
Good choice of components, the XTR chainset really sets it off, is it a catalogue build?
K

Aivan helvetin hieno ja ihana. Huh huh. Looking great and lovely.
You must log in or register to reply here.