I haven't got so many anecdotes about the Zooka stem. Suffice to say, a couple of years had passed since the 1989 launch of the trail stem, MTBs were big business, and the company Ringlé Components had grown a lot, particulalry thanks to the Cam-twist and Ti-stix, that redifined the QR market. It was time to revisit the handlebar stem and get some weight off. Colours had done well for the QR market, so colours came in for the Zooka too, perhaps in the 1992 season.
The zooka was entirely billet machined, as can be seen here (some 'work-in-progress' parts), along wth this first off, high polised rather than ano: 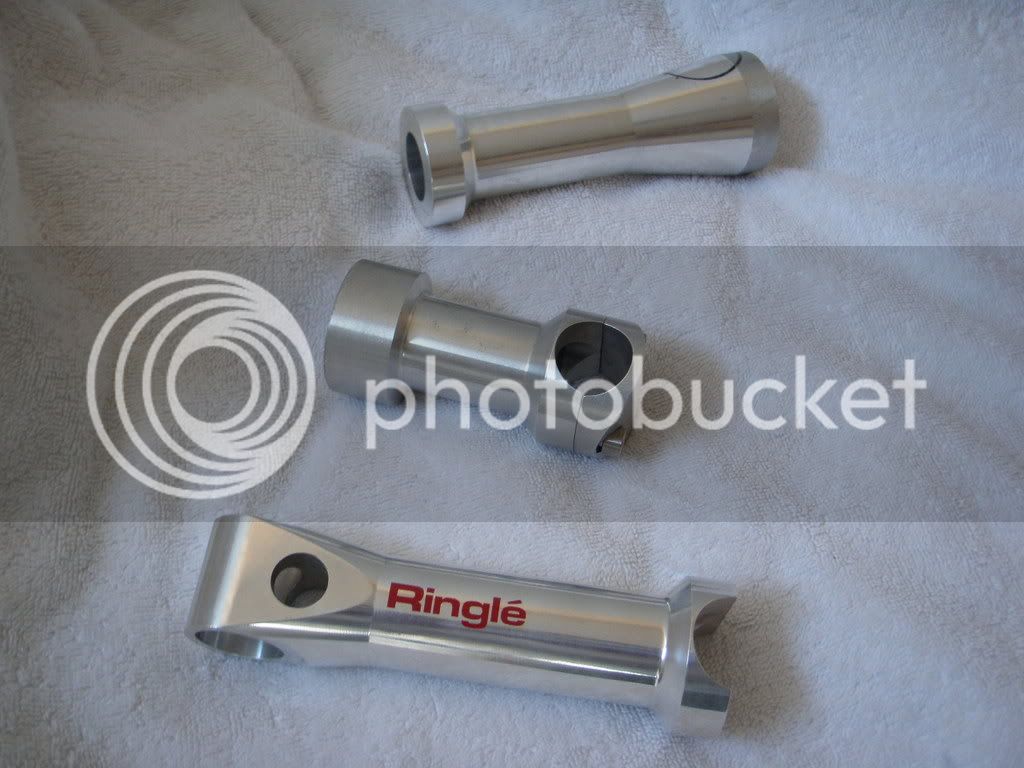 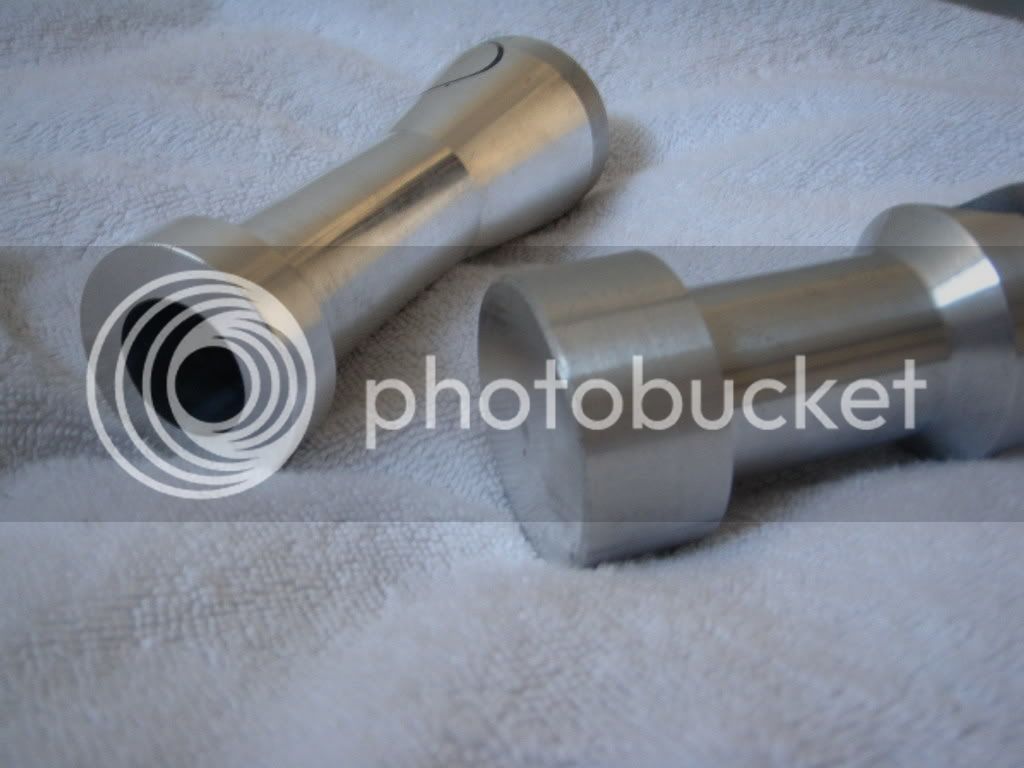 The zooka was an expensive product. There was MASSSIVE variation in the parts lists. 3 headset sizes, quill and clamp-on versions, initially a few reach/ rise, but continually expanding, and initailly 6 colours, again expanding . Around 300 build variants were initailly configurable. And all this was hacked from solid, with huge waste, leaving the metal where you wanted it. Precisely.
There ware variotions on the theme of anodising, with stuff like the ti-dye coming in in the mid 1990s (but consistency was hard), and this one here shows an experimentation with a linear fade, red to dusk, that never made production, just too tricky, but would have been cool on a klein 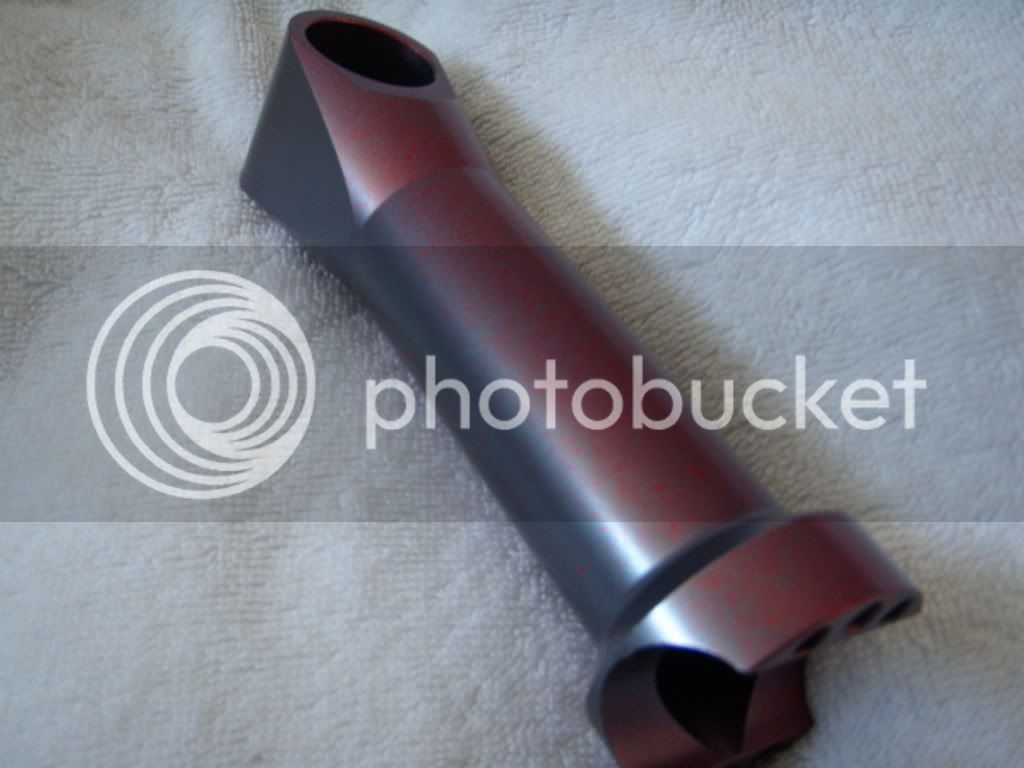 Interesting enough, the machinists had got the tolerance nailed so tight, and the quality control was really high, so noting bad made it out the door. However, the human touch often added cock-ups. The stickers often went on wonky or weren't in the correct location. In the end, an investment was made in a laser marking machine, to get 100% repatability. However, even this didn't always go correctly. This is one of my favourite pieces incientally. It shows that the company was still very human. And that mistakes can happen. Also that machines aren't always a good thing. The stickers although expensive could be removed. Laser marking, once on, is on.. . Stuff like this was always destroyed. I'm lucky to have this one. 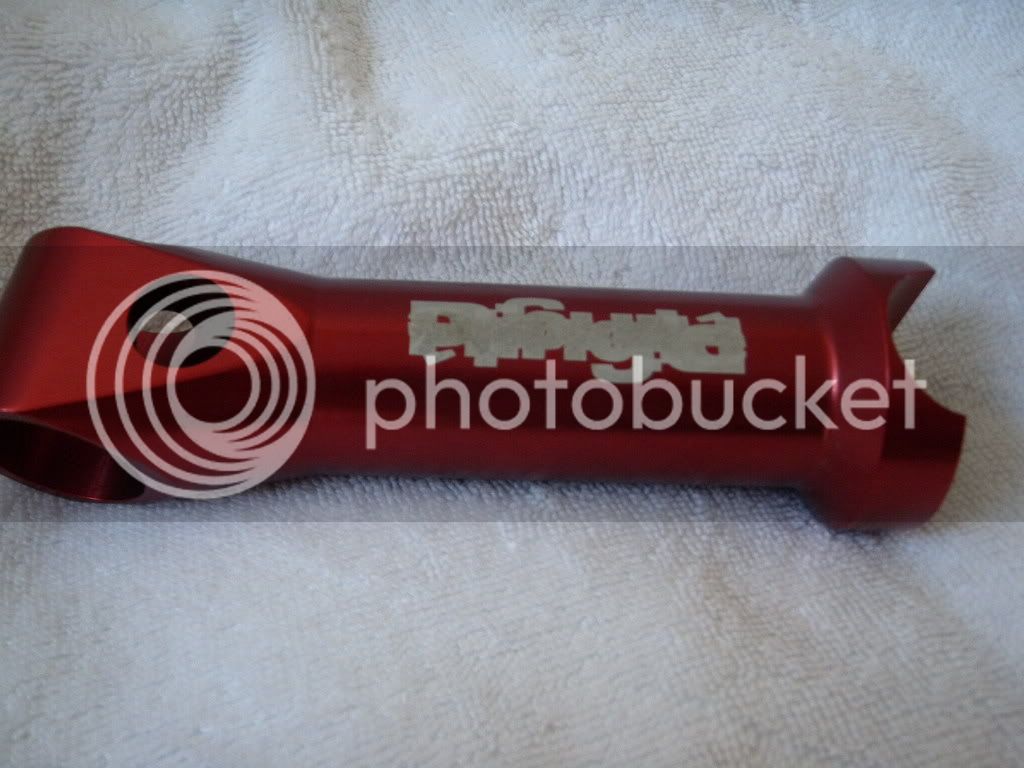 race bikes.Is it possible to find one?

The yellow one was sprayed for the race bike, along with HED Rims, and Judy fork lowers etc. It was never offered by Ringlé. If you check nporternz's Yeti DH 4 in the DH BOTM competition month before last, you can see on there

Thx for your quick answer.
I have a 94 Yeti arc full of ringlè stuff a part the stem and i love it

the anodising is the difficult thing (well up here anyway)

LAGrippe":1atqxopk said:
I have always wanted to get the yellow one that Yeti used for their factory

race bikes.Is it possible to find one?
Click to expand...

I got Monkey, the Yeti mechanic at the time, to paint mine up at the Yeti factory. There's certainly a few stems in Yeti yellow floating around the UK market as I had four painted up at the time. Stupidly I never kept any
C

5 of them for sale on US Ebay right now.....
You must log in or register to reply here.