Finally managed to get the cranks laser engraved, polished up and re-assembled with NOS chainrings - 52/36, think they look pretty good, lots of people put nice pantographed parts on all their Italian steel classics, so why not on a nice Raleigh?!

Hopefully get some pics of it on the bike at some point, if anyone is interested in getting anything engraved send me a PM, I can do this to almost anything metal with any logo/text (as long as its flat-ish!) so any crank arms/chain 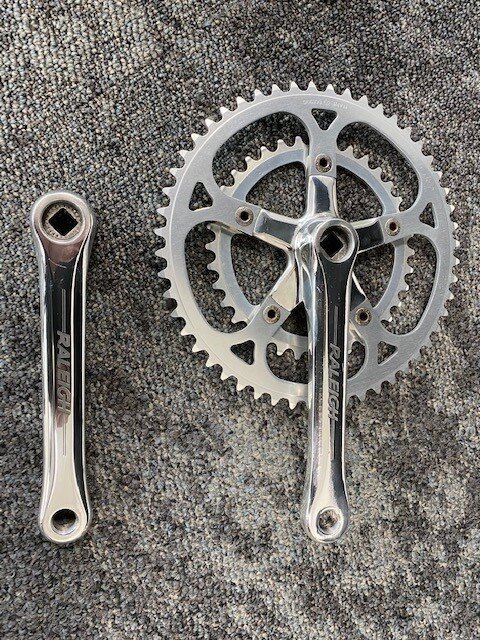 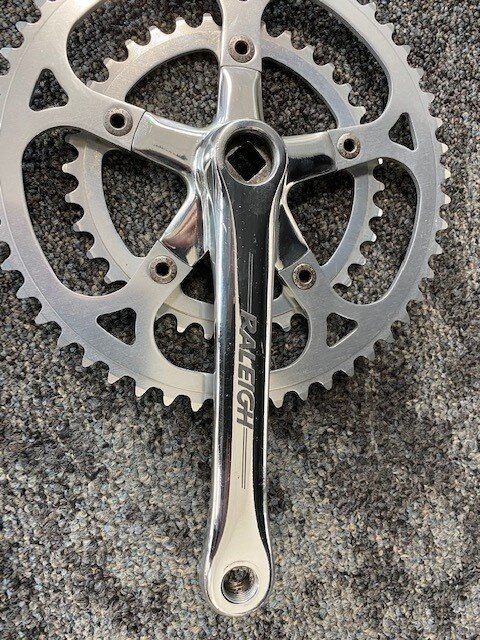 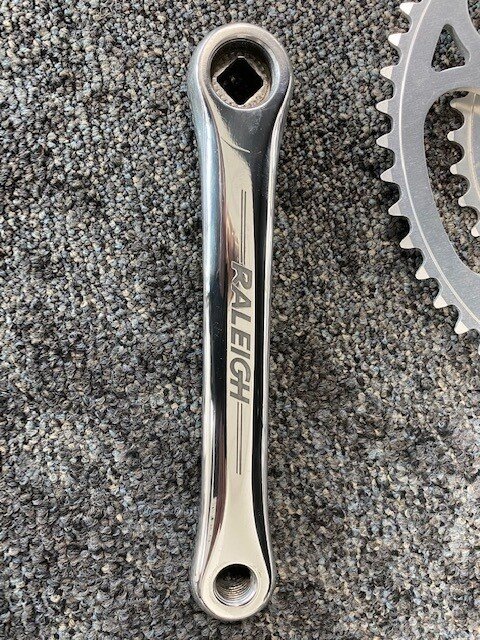 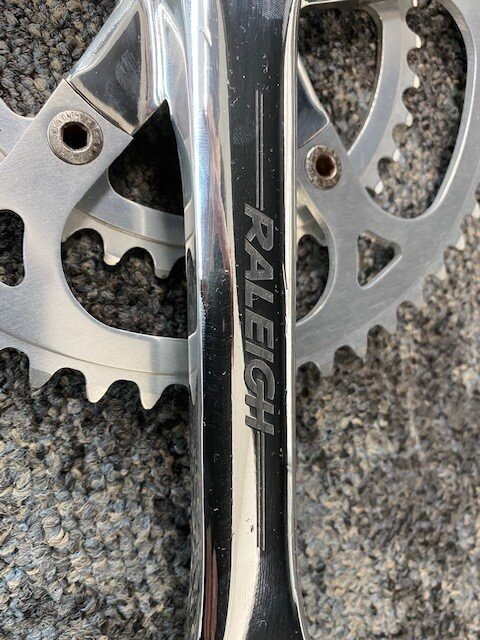 rings/stems etc, for a small fee!

Also got the XTR cassette fitted and all works/shifts perfectly with the rest of the Shimano parts - as far as I know the sprocket spacing is the same on Road/Mountain as long as the number of speeds is the same - this is an 8-speed XTR (mountain) cassette, with 8-speed Shimano 600 (road) shifters, but all the cable pull ratios and spacing etc works together fine.

rBotM Winner
PoTM Winner
Who did the engraving work?

I did - we have a Laser Engraving Machine at work, so just designed the logo in CAD on the computer, did a test run on a piece of scrap aluminium, and then lined up the crank arm in the machine and pressed go!

Only thing now is whether I go and slot or drill the chain rings, I really like the look of the slotted Shimano rings I've got on the 600 Crankset now, thinking I could go with some narrow slots, or 'Drillium' style with small holes all around the perimeter.

As ever, idle browsing turns into accidental bidding...

Have ended up with another Raleigh Competition - the next model year so it's 1986/7 - need to check the frame number when I get it.

It's Reynolds 501SL tubing, which I think means 501 main triangle, with lighter taper gauge stays, and has nice cut out lugs. Paint is a bit scuffed and scratched in places, but no real rust, it doesn't have the original fork, it's got a full chrome 531 fork instead, but I quite like that, no dents, good honest frame I think.

Would have originally come with Shimano 105 groupset and SR finishing kit, I'm planning on a similar theme to the '85 one - make it a bit of a resto-mod with period upgrades, so going to go Shimano 1055 8 speed groupset with 1st Gen 105 STI shifters, the 1055 dual pivot brakes, and probably stick with SR seat post/Handlebars/and SR 'Raleigh' engraved stem. Already have a set of Mavic Open4CD's in near NOS condition with RX100 hubs, so those will go on it, and I'm going to stick the Sugino crankset that I engraved on to this one instead and keep the '85 full Shimano 600.

Not sure whether to start a new thread for this or keep it on here?

Nice looking frame you’ve got there. What are your plans?

edit. Went straight to pics. I like pictures. Retro mod is best of both worlds in my opinion. I do like bar end shifters for functionality and aesthetics as the Sti is very ugly however you look at it.

The History Man said:
Nice looking frame you’ve got there. What are your plans?

edit. Went straight to pics. I like pictures. Retro mod is best of both worlds in my opinion. I do like bar end shifters for functionality and aesthetics as the Sti is very ugly however you look at it.
Click to expand...

Agree that they're not the most aesthetically pleasing - no doubt nice aero brake levers with drilled levers and narrow hoods look better, but can't fault STI's for functionality and safety, and I never grew up riding bar end or downtube shifters, so I don't know what I'm missing!

The first gen ones are built really solidly - the ST6400 ones on my '85 work faultlessly, and who needs 22 gears anyway?!
H

Lovely frame, nice to see it get a new lease of life.

Had a chance to give the frame a quick once over, bit of a clean up, all looks pretty decent - few scratches to the paint and decals, but no real rust, not sure whether to try touching up the paint and replace on eor two of the worst affected decals, or leave as is as it's pretty honest and wearing it's battle scars well!?

I did spend a bit of time on the chrome forks as there were a couple of small surface rust spots which i guess have developed from stone chips. Went with the old aluminium foil and some WD40 and they've come up a treat - the worst spot is now hardly visible other than the original stone chip, luckily the chrome itself hasn't really bubbled up at all. I do like this style of cut out lugs also, adds a bit of interesting detail to the frame over plain ones I think.

Still need to acquire various parts - brake calipers/derailleurs/stem/seatpost and handlebars. Need to double check, but I think this frame take a 26.8 dia. seat post - anyone out there got an SR Laprade fluted one in the right diameter?!