Pinarello Radius, Italian style on the edge of the 90s.

I just introduced myself in the proper section, but since many readers will skip that thread. This is Lukas 30 years old from the Netherlands.
This week I quickly acted on a local marketplace listing and picked up a Pinarello Radius frameset. I definitely wasn't looking to buy anything. But sometimes its woth a shot. So I ended up with this frame in 56cc top/seattube. Bare frame weight is 1905 grams and approximately 650 for the fork ( 1 inch threadless, ahead ). It looks like the genuine thing. However I question whether paint is original, since some of it is questionable at best and there are no tubing stickers to be found. I has seen some heavy use in the past. I definitely wasn't cared for at all by the previous owner(s). And sadly the nice Campagnolo Chorus headset it came with is no longer salvageable. These pictures are after I removed years of crud, mud and grease of the ends of it. I gave it a quick polish with some compound. But the more I look at it I think a respray is in order. The worst of the damage is on the non drive side. 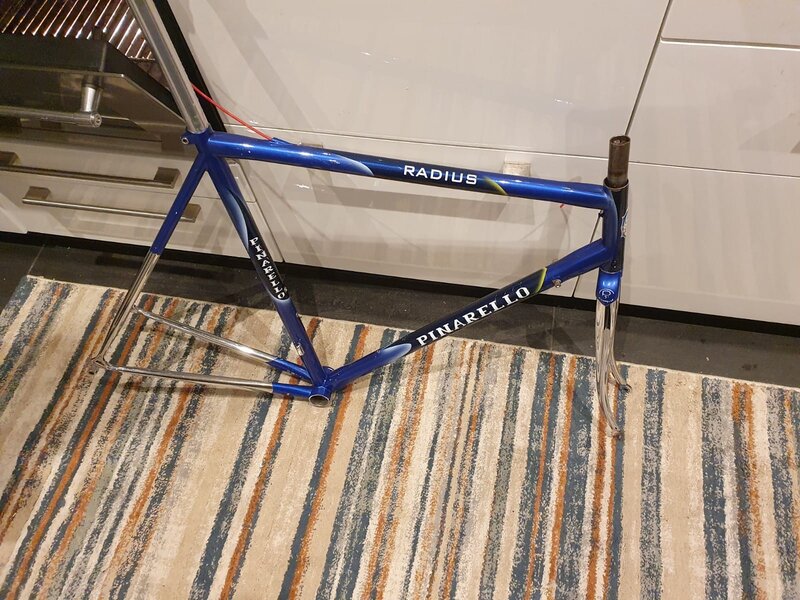 I can not find much information on how to date the frame. The only thing I know is that the radius model was introduced in 1997. But I cannot find any information on model years / available colors / frame numbers.

Any info is welcome.

Not seen a paint scheme like this one before, so could well be a respray (especially with no tubing decal). Super nice frame and top of the range. Brochure listing below: 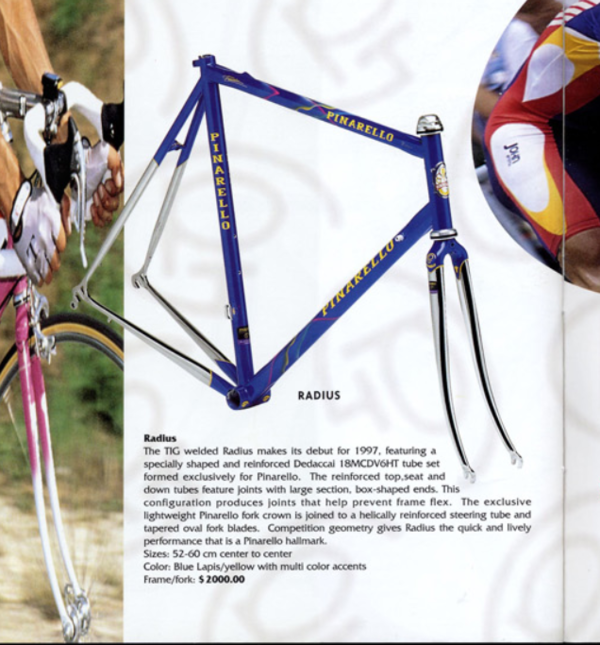 Lots of speculation online that the late Dario Pegoretti may have built these frames and that he had a role in the frame design and custom tubing.
Last edited: Oct 29, 2021
Q

Yeah, I found about that. However there seem to be several differences in the production runs and paintjobs, and you can find them both with threaded forks and 1 inch threadless examples. I am not sure if you could specify your fork of preference or that that ahaed systems are later examples.

I did send an enquiry to pinarello and they confirmed that the paint is not completely original. But it is an original colour. I provided them with the serial number, however they dont seem to have records of it. Well anyway lets see what i can do with it.


thank you for your email.


What a rare classic frame you have found!

I’ve spoken with our painters and they confirm that the paintjob is partially original, as it seems that the decals were removed/restored and painted later in different format/font.

The paint and decorations are official.

This model was sold during the mid-90s, but I struggle to give you a more specific date of production.

I remain at your disposal should you require further assistance.

Lovely frame. This Dedacciai tubing is excellent, my Atala has the non-Pinarello tubeset and a similar build, very light and super stiff for a larger steel frame.
Q

So i have not gotten around to getting it painted yet. Cant figure out what to do color wise anyway. So I decided to first build it up as is for now. So I did spend my time gathering and fixing some parts. I want it to be a very usable and enjoyable bike, but still with a bit of classic looks. Luckily I am in the Netherlands so actually standard gearing is the way to go. I am going for Campagnolo record 10 speed. Of course I have to cut some corners here and there, since for example I will have to resort to cheaper more available parts ( veloce casette, since I am not paying 250 for a record cassette ) I did however find some nice NOS goodies too. The aim is to strike a nice balance between ridability and usability and classic looks. Which is always difficult. 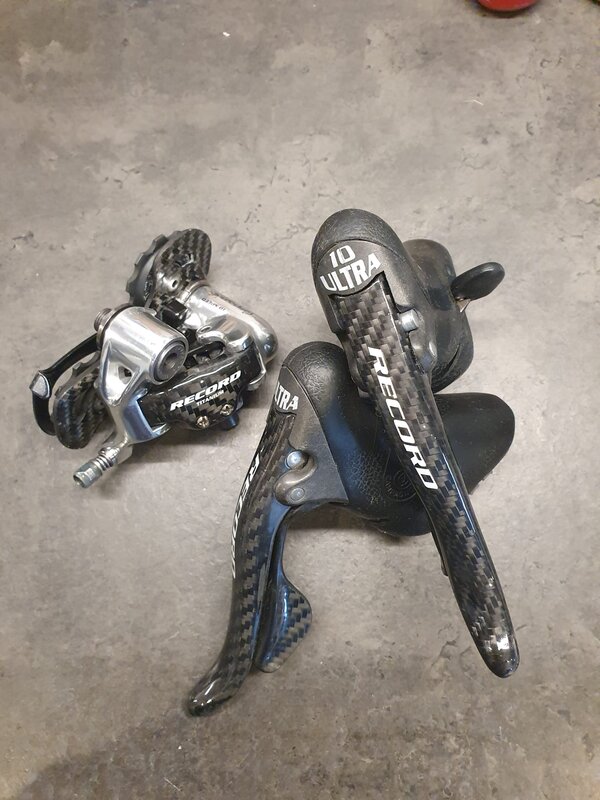 Looking smart again, I am however still missing a front derailleur. It will turn up at some point. In an emergency I will grab a centaur one off another bike for the time being. Have to keep a keen eye on the local marketplaces. 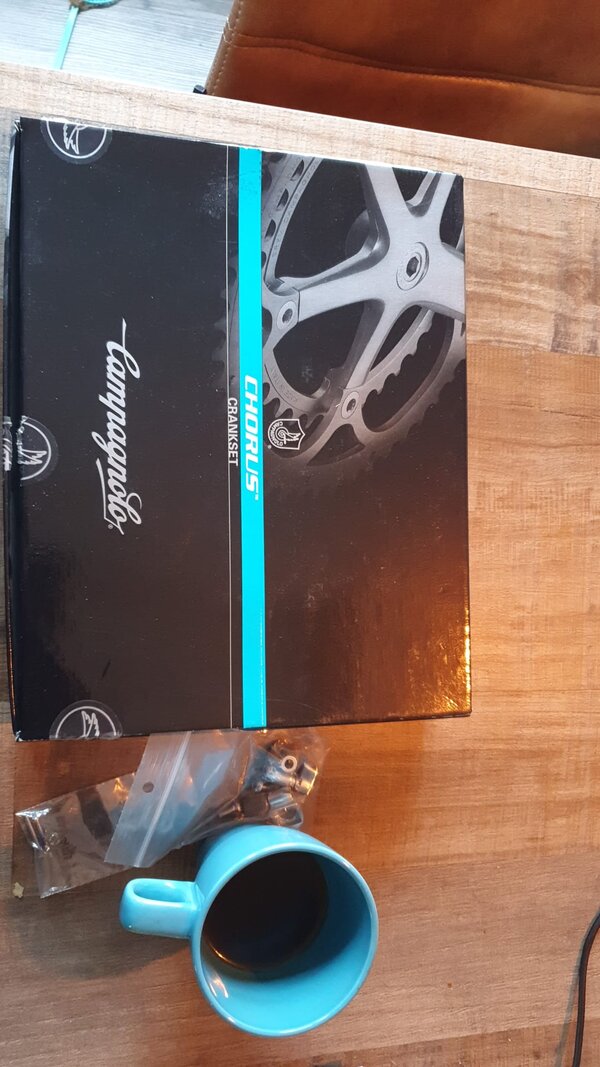 Some fresh NOS parts. Chorus crankset and dura ace barrel adjusters plus some dropout adjusters. I spend a little more than I wanted on that, but sometimes one has to treat oneselved. Prices were still quite reasonable. I have a temporary headset too and ITM sterzo with needle bearings Nothing too fancy since I risk damaging it when I have decided on paint and take the bike apart again. It is quite heavy, but it will do initially.

I don't know how many of these frames were made, but I don't think many of them are in the Netherlands. So don't have your hopes up high. I dont think all that many of them exist in the first place and this is certainly not the best one. There is a somewhat similar Pinarello Pegaso on marktplaats now in dedacciai EOM16.5 with record groupset, but thats something else entirely.

Quite a lot of nice old stuff pops up on Marktplaats and usually the prices are quite low. There are plenty of bargains to be found daily. But most of the retro stuff limits itself to Dutch and Belgian branded frames. Gazelles, Concorde, Duell, Bioracer... etc. In that way I picked up a near mint Bioracer frame in columbus EL OS for 100 euros, these are actually very well made frames. And this Pinarello Radius frame cost me 75 euros....

A straight flip on ebay can often double or triple your money ( everybody pays way too much there anyway ).
Q

So everything looks like this is going to a longer term project.
I am still in doubts regarding the paintwork. I mean, its probably worth restoring to its former glorious self. Which can In my opinion not do without the chrome. But currently the chrome is in rough shape, especially on the front forks. I cleaned the surface rust off, but you can still clearly see the pitting marks, which are obviously going to continue rusting. 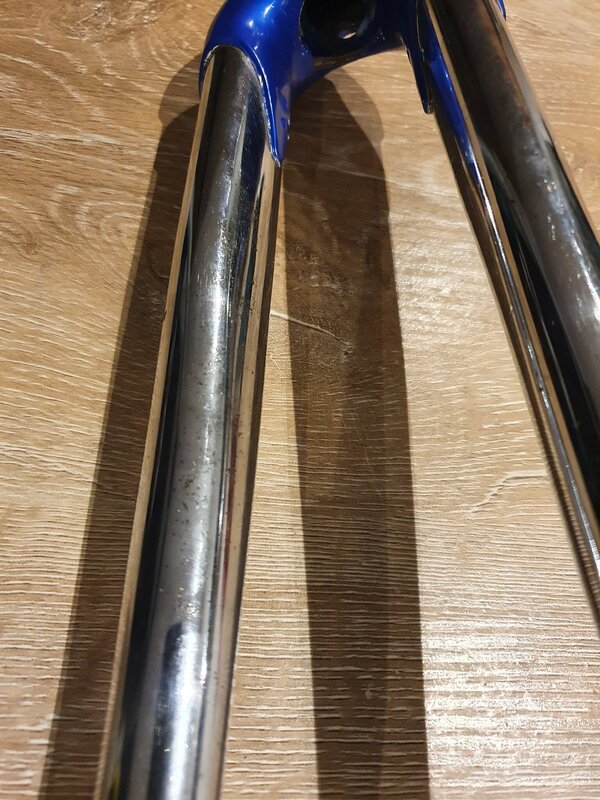 And I do not want to spoil a nice paintjob put with sub par chrome rusting away over time. Its an all or nothing kind of deal. It is supposed to be a flashy Pinarello after all. 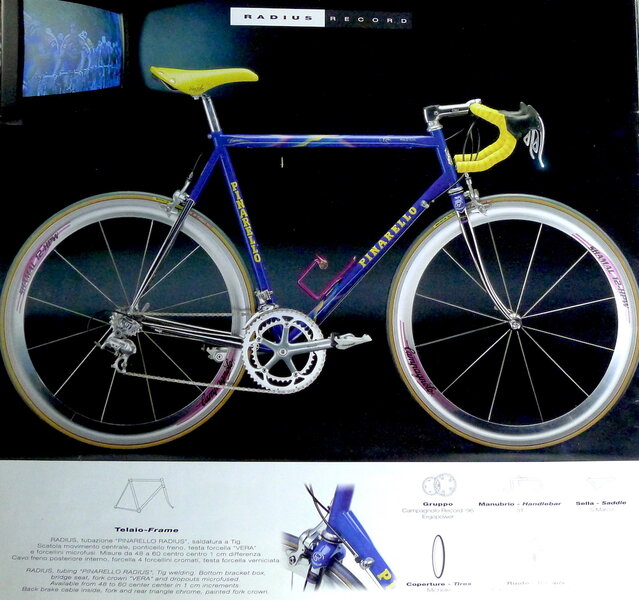 However restoring it to the above image including rechroming may set me back way over 1200 euros in paintwork alone. With restoring I mean at least restoring the frame, I can settle with other classic-ish components and I like the 10sp ergos, I'm also unlikely to acquire those shamals since those are worth a pretty penny too by now. But some record hubs with nice period rims is achievable enough and easier to actually ride on.

I inquired with the painter and their preferred plating company and currently the lead time for chrome work is five months! It is however not the hardest paintjob to recreate, I estimate none of them to be exactly the same anyway. They were probably built to order and not in series. And in most of the pictures I find online there are small variations in the airbrush colors or the placement of the decals.

However talking to myself I know I may regret later painting it any other color. There is one for sale, resprayed in plain blue without the chrome and the fork, it doesn't seem special at all. Radius listing. And the overpriced white one doesn't do it either white radius

Still a bit reluctant to splash out the cash though. But I mean, even on value I know it may be worth it. If not now, it cant really depreciate in value in the future either. I will always be of interest to someone if the work is done well. However I intend to keep and ride it for a while.

Anyway, Who doesn't drool over that catalog picture above. I know I do.

Have a nice weekend and prepare well for your christmas rides.
Q

One thing I forgot to add. At least my respray appears to be resemble the 2002 model of Pinarello Prince. I have no clue why somebody would want that. However it is likely the original decals were allready fading and peeling off, like many pinarellos of the 90s. So the respray may have been done four to five years into its life. At least the left the original chrome, but they could have done a better job masking it. The previous owner mentioned it was missing its headbadge when he got it. So he added that to it. He rode it for a while as its main bike and then it was used as a winter rig / errands bike. 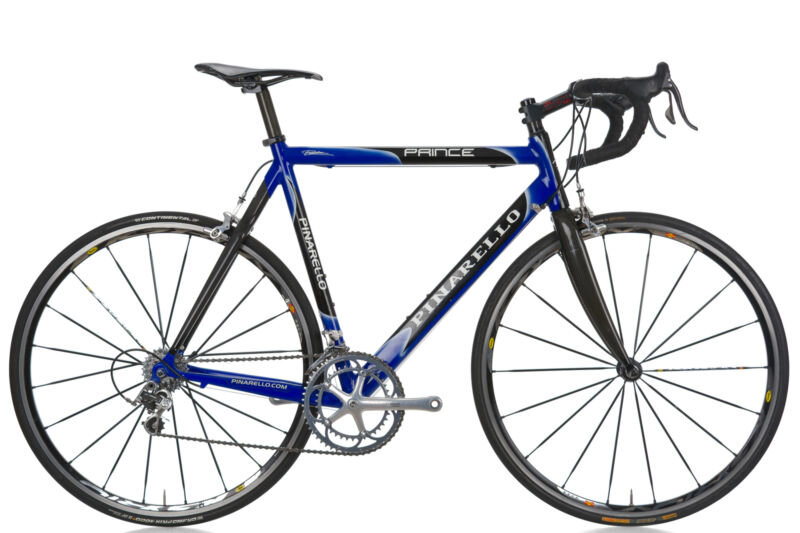 Hi Luuk,
I have a 59cm Pinarello Radius frame that I bought brand new in ‘98 from the sole importer into Australia of their frames at the time. I waited 9 months for it and constantly rang the importer asking when it would arrive. He kept telling me that at the time Pinarello only had two frame builders and they were busy building their orders for team bikes and they weren’t prepared to compromise on quality. This seems to lend to the story that Dario Pegoretti was subcontracting as a frame builder to Punarello at the time.

The Dedacciai Radius tubing steel rides like new and is still stiff and amazingly responsive. It so sweet to ride even today.

The build quality was number 1. At the time the Radius was the top of the range frame from Pinarello. The first Prince frame was available and was in the same catalogue as the Radius. It was slightly cheaper and I think the only aluminium frame as that was the new exotic material at the time. I still had the catalogue with the photos of all the frames and paint finishes but I cannot find it any longer. I think my wife threw it out.

With regards my beast I kept original until about 5-6 years ago when the decals started to flake off. I thought at the time that it was the paint cracking so I ended up getting it re-chromed and repainted twice. The first time I was very disappointed with work as I expressly told the painter to replicate the original paint job. As I found out after it has been repainted, the Pinarello markings were decals and not painted on. If I had known that I would have bought replacement decals and repainted it. The first painter also ruined its aluminium head badge which I have been unable to replace as it is embossed.

Another thing to note was that I ended up buying a set of Pinarello carbon forks that were designed for the layer Pinarello Opera steel (with carbon rear stays) frame. The original chromo forks weighed almost as much as the frame.

Anyway I have attached a few photos of my Radius from with its original paint from Pinarello. This is not long before it got repainted and completely rebuilt. I built it up originally with Dura ace 7700, still a great looking group set and was and us always rock solid