Hmm, I cannot recall the original, but Reynolds recommended not chroming 753. It's surprising that Peugeot did so...unless it was chromed later along with the respray.

Innesuson said:
Yes they are, the height above the drop out on the cassette side is 100mm, the left hand side is 70mm above the drop out. I assume this may help narrow down the ID of model or decade?
Click to expand...

It should do? I've never seen anything like that - often the offside chainstay is chromed shorter or not chromed at all (because it doesn't have a chain slapping it), but mis-matched seat stays?

Quick search shows that later models are chromed only on drive side, and earlier 80s had shorter chroming on the off side chainstay, but still the even heights on the seat stays. So, I don't know if that helps or not!

hamster said:
Hmm, I cannot recall the original, but Reynolds recommended not chroming 753. It's surprising that Peugeot did so...unless it was chromed later along with the respray.
Click to expand...

Peugeot always chromed 753 stays, as did many others. Saying it was risky, was pure marketing from Reynolds, just like certifying builders before giving them tubesets! Pretty smart marketing actually, to try and stand out from Columbus SLX and other similar tubesets!
J

Back in the 1960s & 70s Columbus used to say the same about SL, later on they said the same about Record too. Most builders ignored the advice.
There is actually some engineering basis to that, chrome plating can bridge cracks so hiding tubing or joint faults. Nickel doesn't do that so is the only bright plating allowed on motorsport suspension components.

Also try here for info. If not already.

Well, after some trawling through the 80's brochures (mainly focussed on UK), it seems that the most likely the original bike was a Perthus Pro. This is mainly based on the 753 frame as most components have been swapped out for alternatives. I'm just picking up on features on the frame such as cable runs, bottle mounts etc. However, one aspect which has raised questions is the difference in height of the chroming of the seat stays, again I can only assume this had been done when the respray was carried out? Unless anyone know of whether this was ever done from the factory, maybe that differentiated frame from country to country?

Definitely going to keep it though, doesn't make sense to let it go for a relatively low return, especially when you see what modern bike that could buy. Thanks for all the comments, really impressed with the depth of knowledge out there on all sorts of topics, really interesting reads. 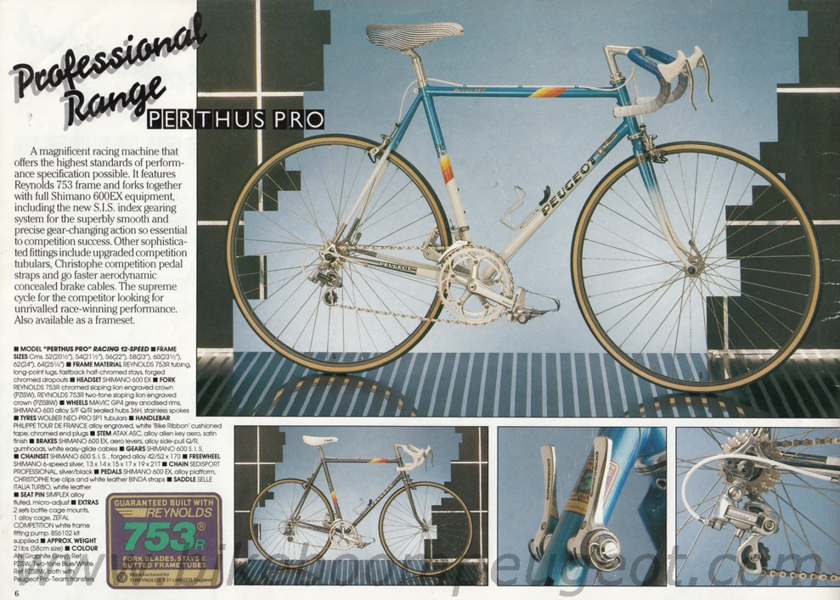 Looking at the brochure, is it possible that the original owner actually purchased this as a frameset & had it repainted in their club/team colours from the beginning?
D

Concerning the length of chrome on the stays

Peugeot catalogues are not always as an authorative source as we’d all like: they had the bad habit of sometimes recycling the previous year’s photos. Therefore, There may have been a difference in caroming between model years not picked up in the catalogue .

Also possible that the stays were originally chromed and then painted over and so the repaint simply left more chrome on display. Usually chrome to be painted over has a rougher finish, but, I’m not sure this is the case if you are part painting and in any case it is a Peugeot, so all logic goes out the window!
M

Peugeots chroming on the PX and PY models often varied. They got meaner with the visible chrome on the chainstay and seatstays as the 80`s went on , the drive side chainstay was usually at least 3/4 chrome but as the years went on it reduced to about half way, the non drive side always had about a quarter on the chainstay and seatstay. The paint was applied over the chrome so you can sometimes reveal more chrome under the paint. I`ve also had the rarer Columbus SLX and also Reynolds 708 Pug frames which had a more generous and uniform chrome on both drive and non drive side. Only the Pro10 model had full chrome rear triangle but it was not offered in Uk catalogues but could be ordered as a special to Uk dealers. Interestingly the later 80`s 753 / 653 models that had painted forks were fully chromed underneath .
You must log in or register to reply here.