Kona Fan
This isn't one for the purists but I want to show some appreciation for this nice retro steel frame which is finding a new lease of life as transport for my stepson in Melbourne.

I bought the frame and forks based on the attached photos -- it seemed like a good deal, especially with those butted forks and the fact that it's a larger size which seems to be more rare.

I was a little disappointed when it arrived: sans wheels, it looked too small for me, but fortunately the stepson said he thought it was really cool and he was in need of a robust bike for commuting and getting about. So I decided to build it up as a simple ride for him, using as many of my discarded and spare parts as possible. His only requirement was that it shouldn't be too blingy as he'd worry about it being stolen. I'm not sure I can stick to that criterion.

It's quite hard to find detailed info on these bikes online, but no matter -- I wanted to make it a 1x8 with a bit more of an upright seating position. Let's see how that goes.

Kona Fan
Thought I'd add this little bit of extra info. I'm not sure of my bike's year, but this looks about right. Original spec -- none of which survives in the new build!

This comes thanks to http://www.parkpre.com/technical.htm

Kona Fan
Here are some of the bits I'll be putting on the beast.

- Dia-Compe SS-5 Mk ll canti levers -- in really nice as-new condition
- Red anodised (and faded) 'Avitar' risers
- Shimano CS-HG 41-8 'Megarange' cassette (to go with a rather bashed XT 8-speed derailleur and Deore 8-speed shifter)
- . . . which would entail using one of these doohickeys so the derailleur can shift to a 34t sprocket

Kona Fan
Still digging out the parts for this build. Turns out the frame takes a 27.0mm seatpost, and I have three candidates (thanks to hankering after building early Konas). The first is an Easton EA50; second is a Shimano DX which is mint and came all the way from Malaysia wrapped in clingfilm. And then there's one branded BBB which I hadn't heard of but which seems quite good quality. (The one pictured in the first post above came with the frame but had no clamp or bolts).

In keeping with my stepson's urban aspirations, I didn't think a skinny saddle would be appropriate, so found a San Marco 'GI-Lux 311' which was once probably suede. Tried it out on the BBB and the Easton posts as part of pre-build fiddling about.

And also in keeping with the stepson's tastes, I started considering some higher bars so he's not required to assume a stretched-out flat-backed position on the bike. Anything to ensure the thing gets used! So am considering the BMX bars below -- the only issue would be finding a cable long enough to reach the rear derailleur . . .

Kona Fan
Given that the original idea was to give this bike a few red highlights (led by the red handlebars), I found this nice XT derailleur with added red bits. It's in pretty rough shape but has an 'derailleur device' similar to Avid's Rollamajig, a super-light attachment bolt, and two 'Shift Biscuit' pulleys -- all in the requisite red. It'll need a strip and clean but overall it's pretty sound.

Kona Fan
Well, I'm crap at putting together a decent build thread despite some brilliant examples on this site. Last week I focused assembling all the bits so I could see what the bike would look like and how it would ride. Here's the first iteration of what I suspect will be a work in progress until the minute before I hand it over to the stepson.

- Frame and forks are as described above.
- Same goes for seat and BBB seatpost.
- Headset is a new FSA Orbit
- I had to buy a cheapo seatpost bolt/QR that works fine but is a bit flimsy-looking
- Crankset is a Truvativ Firex which I think came off a 2000 Kona Cindercone (the frame is under the bed waiting to be built up)
- I added a Spot bash ring and a Shimano 36t chainring
- Derailleur is XT 8-speed as mentioned
- Gear changer is Deore 8-speed
- Stem is an FSA XC 140 (100mm)
- Bars are red 'Avitar' risers as mentioned
- Cantis are Shimano -- can't work out what grade, but nicely made and easier to set up than anticipated
- The rear wheel has an Alivio hub with an unbranded but robust rim
- Front wheel is a Joytech hub which is anodised in a reddish-brown colour, with a Weinmann rim.
- Tyres are some of the few new items on the build: Michelin Country Rock to suit the young man's intended use of the bike as a commuter and occasional towpath cruiser. I wanted fatter rubber but options for 26" are in short supply -- the Michelins had to come from overseas as it was.
- Pedals are an Aussie brand (I believe) called Rock Bros.

I decided against the BMX bars for now as the bike shop I visited in Canberra didn't have any gear cables long enough so I'll need to order one online. And I didn't want to wait any longer for parts to arrive. 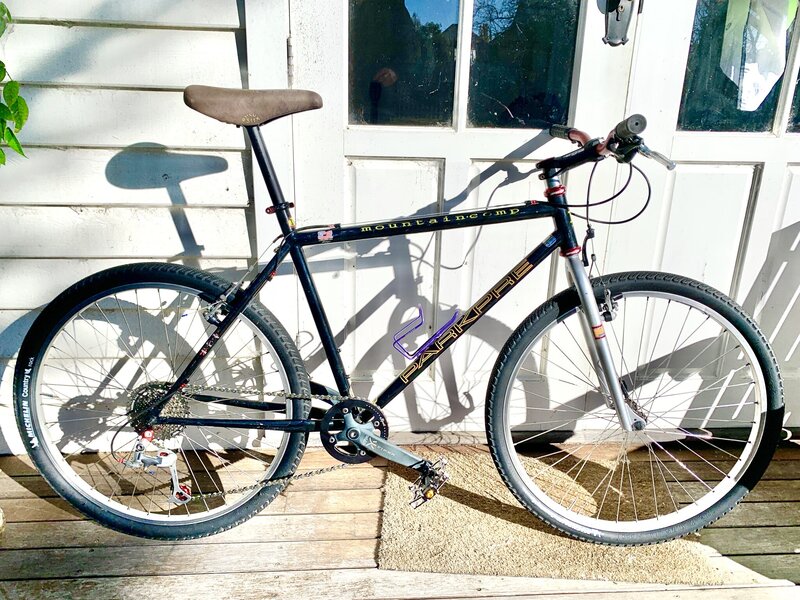 Kona Fan
Some close-ups of various bits and bobs. 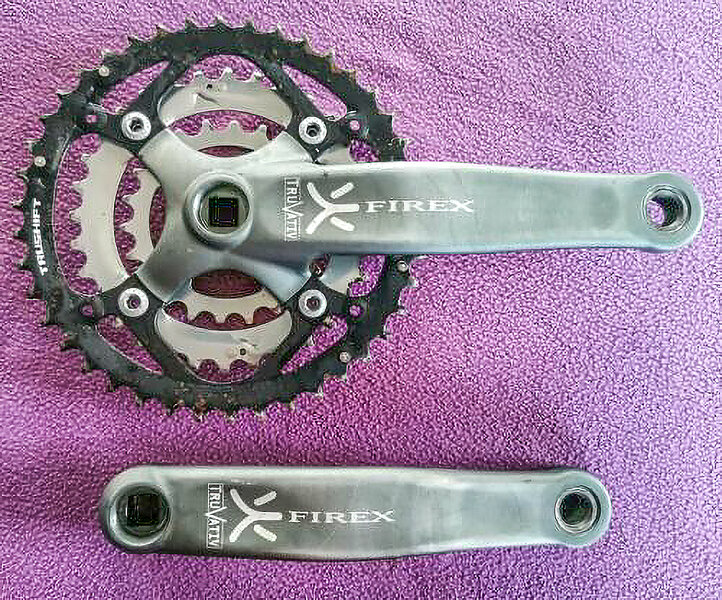 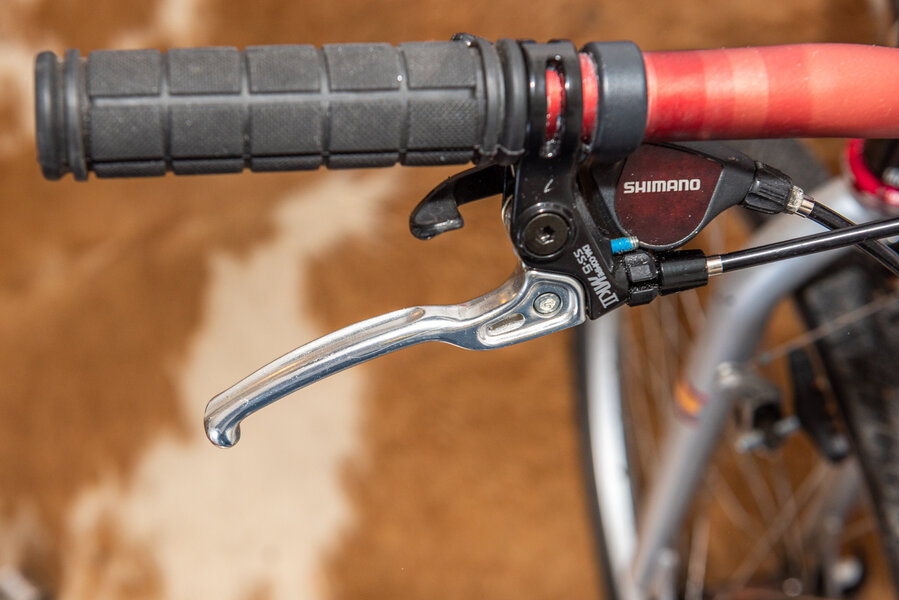 I decided to replace the super-light red derailleur bolt for a standard one -- the lad isn't a weight weenie but I might want to do a weenie build at some point. 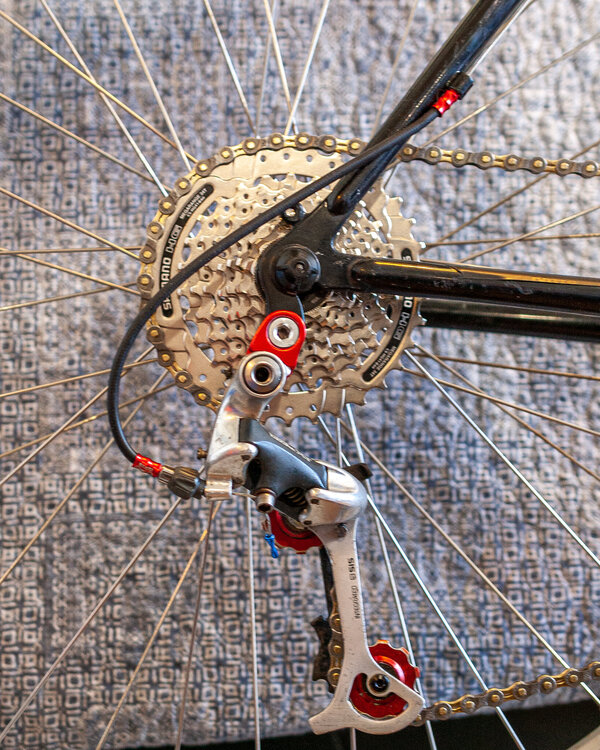 This is ParkPre's rear canti cable routing solution. It works fine but doesn't look very pretty. I'll take it apart and clean it up before the handover. It's quite difficult to find information about how it should look but clean and shiny can't be wrong. 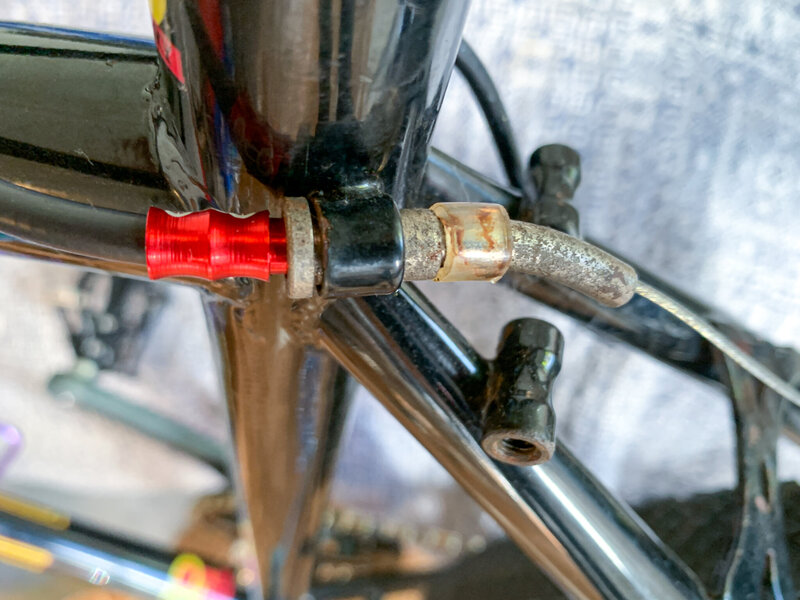