Ok, so cyclocross has a long and establshed traditonal in the uk, with origins back in the 1920s. We know about Geoff Apps’ Cleland cycles work on the back of cyclocross in the late 60’s and the later supply by Highpath Eng. And the Roughstuff Fellowship and The Untold British Story....

But I think that the broad consensus is that mountain biking - not least the name - had its origins in Marin county with the Repack Pack. Not the modifies clunkers, but the first Breezers and Fishers.

So what was the first cluster of US-inspired mountain bikes in the uk? My first true off road foray on something other than a ‘cross bike was on a borrowed Raleigh Mustang on the South Downs. The owner did not use it for anything off road, and the high crossbar, bmx chainset and useless tyres rendered the two muddy days a hilarious affair of pushing uphill and sliding down. A friend had bought a 21 inch Dawes Ranger (531) and I used my knowledge of road sizing to buy a secondhand one a couple of days after him....I am 5 7 and could barely stand over the top tube. It had a range of motorcycle bits and very weird bmx stem, stupid-long gears and everything flexed like mad. 1988 if I recall correctly.

We did a lot of miles. A lot. No kids, great summer on the Downs. Began to know intimately the huge network of bridelways. For us, mountain biking then was miles, not single track. And boy did we put the miles in. Jumping? You must be bonkers.

Downhills were frankly terrifying, the diacompe brakes were shit. The tyres were useless, both in compound and tread pattern.

In 1989 something happened. Bill Rayment in Brighton imported the first Stumpjumper into the UK - anyone know any other imports? Action Bikes opened in the YHA shop and sold Cannondale and Cinelli. I sold the Ranger to someone it fitted - they were 6 foot 2 - and I bought a Cannondale. I think that was the first thoughtfully designed mountain bike I had, with a genuine chance of not killing me. When that was nicked from the back of my car, it was clear that the 1989 Marins (team titanium....palisades) had stretched, low geometry which meant we were really mountain biking....full chat downhill, like whippets with four wheel drive up hill. And decent kit dedicated to off road, from shimano, suntour and the embryonic after-market suppliers like onZa.

For me, the first mountain bike proper in the uk was 1989.

Ridgeback claim that they produced the first UK mountain bike back in 1983. https://www.bikebiz.com/business/ridgeb ... r-30-years.
L

Evans and Ridgeback were certainly some of the earliest 'mountain bikes' from the UK in around 1982/3 but the idea of an 'all terrain' bicycle goes a long way back into the past as above with the Pass Stormers etc.

The 'Mountain bike' was the most influential and the most successful so many UK road frame builders turned their hands to the MTB.

Raleigh famously wrote that they were a fad (which nearly put them out of business) but their Special Products division were punting out SBDU MTB frames in 1985.

Overbury's had a compact geometry MTB frame as early as February 1986 having built fairly traditional looking stuff for a few years previously.

Dawes had their Ranger in around 1983

Other brands like Major Nichols, Mercian, Bromwich and many others had some early stuff

The problem at the time was the availability of specific off-road lugs and parts. It was either road or tandem. Some went to the effort of customizing parts to suit but it wasnt until tubing manufacturers started releasing specif tubing and lugs for the burgeoning MTB market.

The Stumpjumper was available in 1982 whiuch was the basis for many copies, some that turned out badly (Dawes Ranger!) but was itself a copy of a Ritchey.

Graham John Wallace is a member on here and he had one of the first Evans/ Saracens :


Graham John Wallace":2ge8sdvh said:
For anyone who is interested in how mountain biking started in Britain, I have compiled this history.

The History of Mountain Biking in Britain - (The Early Pioneers) This History is periodically updated as new and verifiable information is recieved.

This information is based on detailed research and is mostly based on published and verifiable resources. However, many of the events referred to were not documented at the time, but some years later. Many of the exact dates are not known.

Serious off road cycling started in Britain in the early 20th century with the activity of 'Pass Storming'. This involved riding a bicycle to a mountainous area, then riding, or carrying the bike over a high and unpaved, mountain pass. This activity eventualy led to the formation of The Rough Stuff Fellowship in 1955, an organisation for cyclists who liked to wander from the beaten track.

1955 onwards The Rough Stuff Fellowship used a variety of existing bike designs and some modifications were made to improve performance. There is evidence that a few custom built frames were made and fitted with suitable components i.e: alpine gears, cantilever brakes etc. The idea was to, whenever possible, get off the roads and cycle along lanes and byways. If the going got tough the riders would simply get off and walk.


What was the first ‘Mountain Bike to be made in Britain?
There is little doubt that the Geoff Apps designed Range Rider was the first ‘Mountain Bike’ to be made in Britain. These were designed without any knowledge of the American bikes and so should be considered as a seperate lineage of off-road bike. The first prototype was made in 1968 based on a Raleigh Explorer frame. Experiments using a variety of road bike framesets continued throughout the 1970s. His bikes mostly used 2 inch wide, 650b, knobbly snow tyres from Finland. His first Range Rider bikes, using a custom designed (un-braced) framesets were designed in 197 I believe the frames where made by Dees Cycles of Amersham in 1979. These bikes had all the features of the Mountain bike, though their design was arrived at independently. I believe that these bikes were the first British made Mountain Bikes. (One version had drum brakes another rim brakes).
Later versions of these were sold by Cleland Cycles (Geoff’s own company), English Cycles, and Highpath Engineering over the next ten years. They were built to order and as far as I know never mass produced. In October 1981 Nick Crane rode a third generation Range Rider prototype up Snowdon.

The above bikes were designed as if getting off and walking was a criminal offence. Geoff Apps was also a trials motorbike rider. They were designed completely for off-road use. They are the tractors of the Mountain Bike world, tall, functional and reliable.

Geoff Apps has recently been nominated for induction to the Mountain Bike Hall of Fame.
http://www.completesite.com/mbhof/page. ... mberid=209

By the end of 1982 American built Ritcheys were being brought into England. I remember it being received wisdom that Norman Hiller of Covent Garden Cycles brought over the first purpose built US Mountain Bike, an early Tom Ritchey built Bike. Others claim that either Journalist Richard Grant or Richard Ballantine brought across the first Ritcheys from the States. Richard Ballantine's two bikes brought over for a Saharan expedition were the inspiration London bike shop, F.W. Evans Cycles, to design a Mountain Bike that became the FW Evans ATB, Saracen ATB. Both bikes were identical, apart from the first being usualy painted silver and the latter being painted black or red. In July 1984 I hired a black FW Evans ATB from Kinston Cycles, its frame no was 001.

Which was the first Mountain Bike mass-produced in Britain? Raleigh Bomber? 1981 (I don’t think so). They were American style Beach Cruisers. Only three speed hub gears, calliper brakes and small frame/seat Designed for teenagers who were outgrowing their BMX bikes.

Early 1984 F.W. Evans ATB/Saracen ATB? (Manufactured by Bluemels).
In 1982/3, Richard Ballantine asked London bike shop F.W. Evans Cycles to build up two Ritchey frames he had brought from the U.S. for Tim Gartside's and Peter Murphy's ,February 1983, Saharan expedition. Evans were curios and persuaded Bluemels to build some bikes based on what they had seen. The resulting FW Evans ATBs were mostly silver and branded under the shops own marque. The Bluemels’ own Saracens bikes were identical, apart from being painted black.

The other early British made bike was the Dawes Ranger.

As for the Raleigh Maverick, I remember these as being surprisingly late to the party. The earliest contemporary reference I can find is October 1985. And were "made in Japan", and so don’t qualify as British. British made versions were eventualy mass produced at a later date?


Which was the first mass-produced Mountain Bike imported into Britain? I am not sure about this but the Freewheel, mail order catalogue, included far east made Ridgeback bikes from 1983 onwards. The first that I personally saw were Ritchey Montares in late Late1983, though many other models had arrived by mid 84. 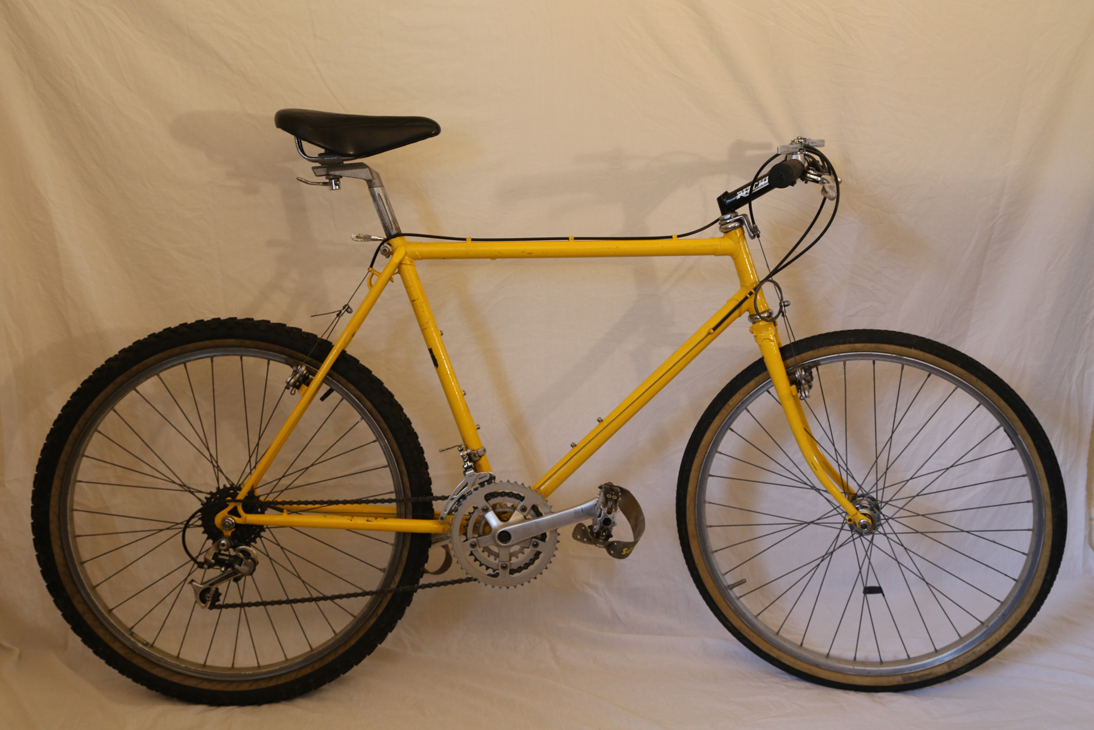 My Dawes Wildcat is quite old.

Many thanks for elaborating on my own personal take - really nice outline of the different strands of influence and action.

The Andy Powell looks to be made of exactly the same tube set as my Dawes Ranger - including the spaghetti-thin wiggly high rake forks.
L


2manyoranges":20tm8r09 said:
Many thanks for elaborating on my own personal take - really nice outline of the different strands of influence and action.

The Andy Powell looks to be made of exactly the same tube set as my Dawes Ranger - including the spaghetti-thin wiggly high rake forks.
Click to expand...

By 1987, these 'traditional' looking bikes were already out of date as tig welded frames and more off road orientated tubing was available

you compare it to a 1988/9 Kona and they are worlds apart - in fact as soon as everything started to be tig welded, it freed up manufacturers to build more suitable designs


2manyoranges":2c9or6jm said:
Many thanks for elaborating on my own personal take - really nice outline of the different strands of influence and action.

The Andy Powell looks to be made of exactly the same tube set as my Dawes Ranger - including the spaghetti-thin wiggly high rake forks.
Click to expand... 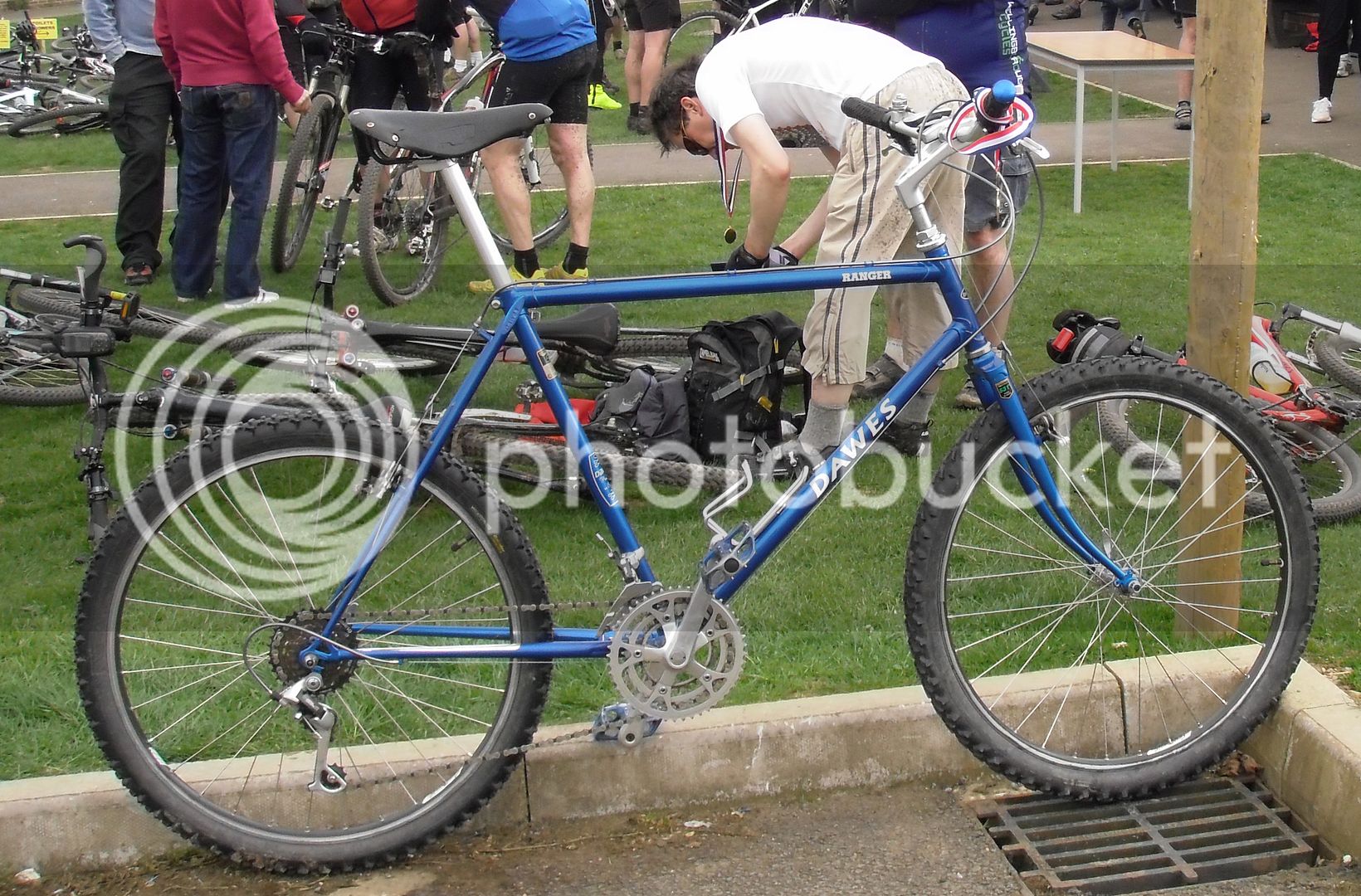 Much longer.
You must log in or register to reply here.

What was the FIRST mountain bike

Out of everything, what retro would you choose for a long term DAILY off road bike?
2 3 4