Best wishes Pip. Admirable how you're handling the crap that has been thrown at you. I have aclose family member in similar circumstances, and I do find your updates to be useful and a little familiar/relatable (for want of a better word) in a way when it comes to the scans and medical related procedures.
Last edited: Dec 5, 2021

Kona Fan
As ever, all is full of love dude

Thinking of you and your family mate, and thank you for taking the time to keep us updated

Pipmeister said:
Thank you very much for your kind words and thoughts. Continuing on from the above, I had a 1-hour Clinic with my Palliative Care Consultant yesterday. We covered a lot of ground in an hour and it became somewhat complex, but here is the gist if it.

The Kidney Function and Liver Function Blood tests showed that the markers continue to elevate, moving in an expected but wrong direction. The Kidney Function was slightly ambiguous, and my Consultant will request an Ultrasound Scan as well as the C.T. Scan that has already been requested. I was then physically examined, which for the first time highlighted the discomfort in my Abdomen.

My Consultant could feel externally where my Liver has become distended, and hardened. This would explain the general pain in my belly, and why I feel a bit out of sorts most of the time. I assume that the C.T. Scan may reveal more, although I’m not sure if any sort of time scale can be determined – i.e. how much and by when will my day to day activities be affected. All I can say is that when I was first given the Terminal Diagnosis in Dec 2019, I felt absolutely brilliant. My Colostomy Bag had been reversed in June, I had loads of energy, and I could cycle like a racing Whippet .

Coming up to date two years on, I can now “feel” something externally in my Liver, and I have very little energy, which is “managed“ by some pretty hectic Class A Drugs; talking of which, my Consultant has increased the dose of two of them, and added two further pretty standard drugs for pain relief.

My Consultant asked me how I feel about all this, and I always respond by saying, “This is where we are with it, this is ‘the news’ – we can’t do anything about that, so nothing will be achieved by getting dispirited about it. It’s the cards that I have been dealt.

I would like to get my place clear of tat, so that my brother and sister don’t have a huge task of wading through my clutter. I’ve done the biggest and trickiest clear-out by moving my massive bike collection on - thanks Wadsy. This may seem premature to some of you, but it will make me feel better if there is very little to sort out when I am no longer able to do so. My Consultant did add that if I feel this would be beneficial to me, that it would be wise to get moving on this now while I have the energy and the wherewithal.

Phew, I reckon that’ll do for now!

Kona Fan
Sending lots of energy and good vibes your way Pip. You really are an absolute champ and an inspiration to each of us. Keep that whippet energy up and rest plenty when needed.

My intention here is to keep you lot informed, while trying to avoid writing a constant waffle of gloom .

I went to Malvern last week to stay with my sister, and had a Zoom Meeting with my Palliative Care Consultant on Wednesday. This made it much easier for me, as my sister took notes while my Consultant “cross-examined” me with her line of questioning.

The news from my C.T. Scan the week before is not good.

The ambiguous Blood Test result of my Kidney Function that she mentioned last time has now shown up on the C.T. Scan. She told me one of my Kidneys has a blocked Renal Tract and is no longer functioning. The other Kidney is working well at the moment, so as one Kidney is enough to keep my trotting along, no further action is needed there at the moment.

The Liver function however is more serious, and now has a large Lesion on one side, with several smaller ones that are causing a blockage on the outlet on one side. She asked me if I have any yellowing to the whites of my eyes, so it would appear that the Liver is now struggling with the development of the Disease.

The Disease in the Peritoneum (Layer of tissue in the Abdomen - Inner layer covers the surface of all the organs in the Abdomen, Stomach, Liver and Bowel. The outer layer lines the wall of the Abdomen) is still tricky to diagnose, but is probably contributing to my discomfort.

Finally, regarding the C.T. results, there are now further lesions in my Lungs, and while she wasn’t specific about this, she did conclude that it shouldn’t cause me any symptoms considering the rest of the findings.

As usual, she asked me about my discomfort in great detail, which frankly leaves my head spinning by the end of the meeting

. She has increased the Opiates again, so some of my posts on the RB forum may be a little gaga from now on – quiet at the back there! Yeah yeah, I know….. what do I mean by “from now on”!

Overall, I feel a bit weak and tired, but I did manage to get myself to Newbury and back on the bus on Friday to pick up some new spectacles from Specsavers. Admittedly, that trip did finish me off for the rest of the day, but I was pleased that I could still manage it on my own. There are people who I can call upon when that sort of thing becomes too much for me.

I have a Blood Test on Monday to look at the clotting ability, as my Liver isn’t doing its’ thing as well. I whacked my head and nose on a door while was away, and my nose bled severely for about 4 hours, and didn’t really stop for about 12 hours.

Anyway, in between beating myself up, doing a bit of visiting and sightseeing in Tewkesbury, I did manage to work on my sister’s bike. It’s a Ladies Trek Navigator, and had a crazy high gear Ratio – well for cycling around the roads in Malvern anyway. I fitted a new smaller ratio Crank, which will encourage her to get out on it more. My brother-in-law and I did look into doing an electric conversion on it, but blimey it’s big money for something that looks like you’ve bolted a washing Machine motor to it – sort of an unfinished R&D project, even for a good one like Bafang! Probably just get a new Pendleton e-Bike for her.

Rightyho, that’ll do for now.

Okay, a bit of an update: I'm back in Malvern again visiting my sister and brother in law.

I have had a couple of Zoom Meetings with my Palliative Care Consultant, including one here on Wednesday. After "cross examining" me, she has decided to retain the current medication, as she appears to be happy with the balance between discomfort management, and not too stoned to cope with day to day activities

I did a tiny bit of work on my brother in law's bike, but had to do it sitting down on a stool. On Wednesday we attempted a walk along the top of the Hills down near the Herefordshire Beacon end, but I couldn't last long in the very sunny, but cold weather.

The next day my sister suggested that we use the Countryside Mobility Access. There is a Cafe near the Wyche Cutting, where you can join up and hire a Tramper Mobility Scooter. Any road up - I signed up, paid up, and off we went with me in the Scooter, and my sister and bro in law walking alongside. The Scooter was a little more robust than other Mobility Scooters that I have seen, with proper big 14" ATB wheels on the back.

We got to the top of the Worcestershire Beacon up the shallow tarmac path, with a fantastic view if a little misty. The Wyche Cutting starts about 2/3 of the way up the Hills, so overall not quite the epic challenge of cycling to the top from Malvern Town centre, but I did feel a bit disheveled by the end of the day.

On the way up: 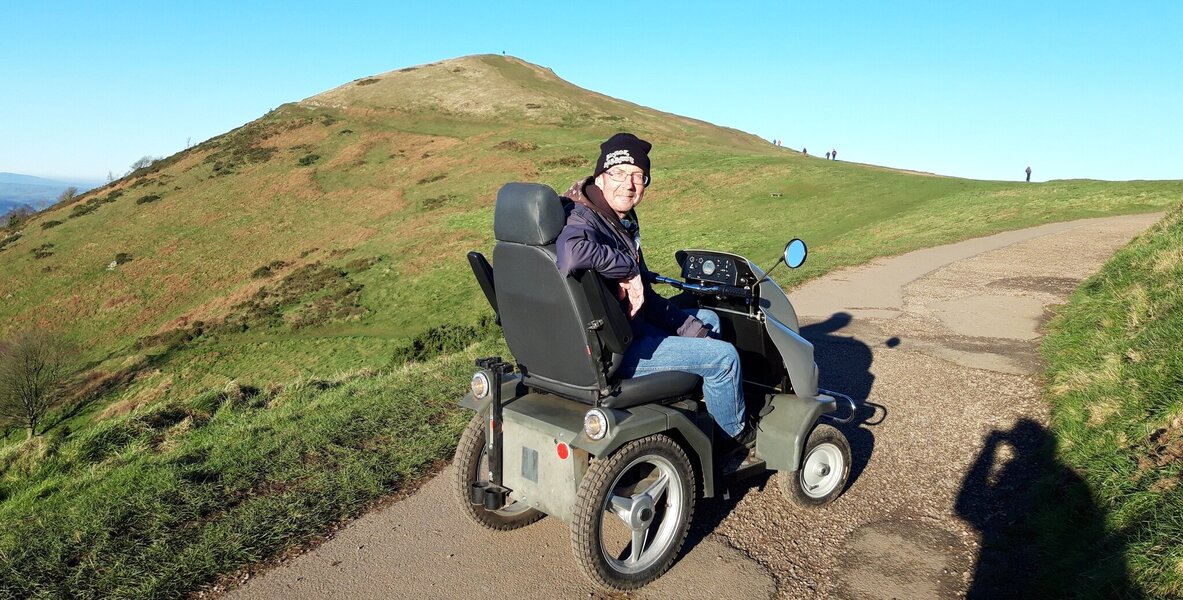 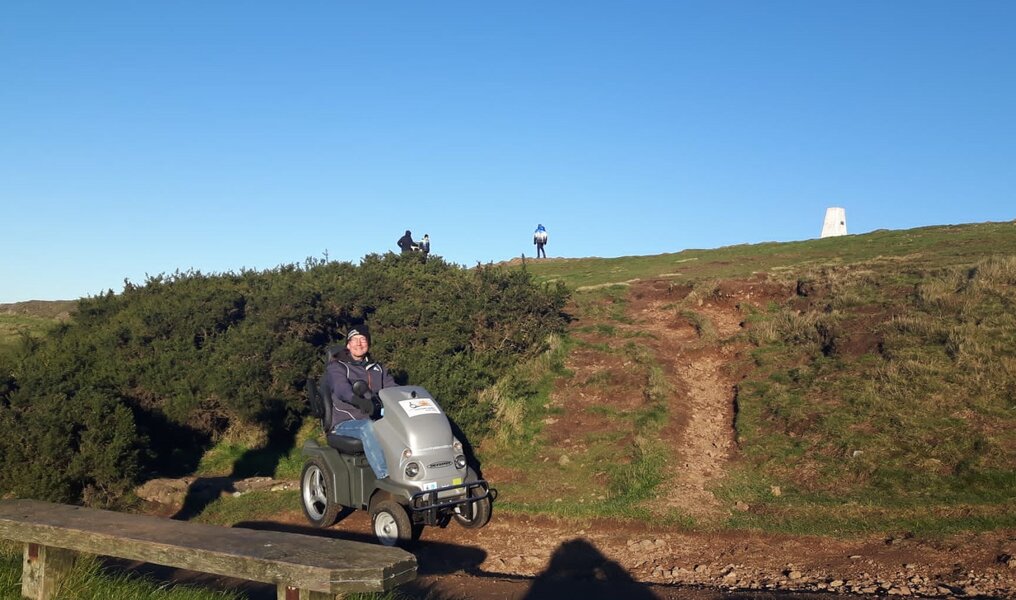 In between all that, I did a bit of a set up on my old Epiphone 335 that I gave my Nephew. The Frets needed to be flattened off and some high ones files down a bit and re-crowning. I then went through the grades of Wet 'n' Dry down to 15,000 - yes 15,000, not 1,500! and finally the guitar Luthier's version of Solvo Autosol. New set of strings and voilà, we now sound like all those Indie Guitarist, and not at all Full Metal Jacket! 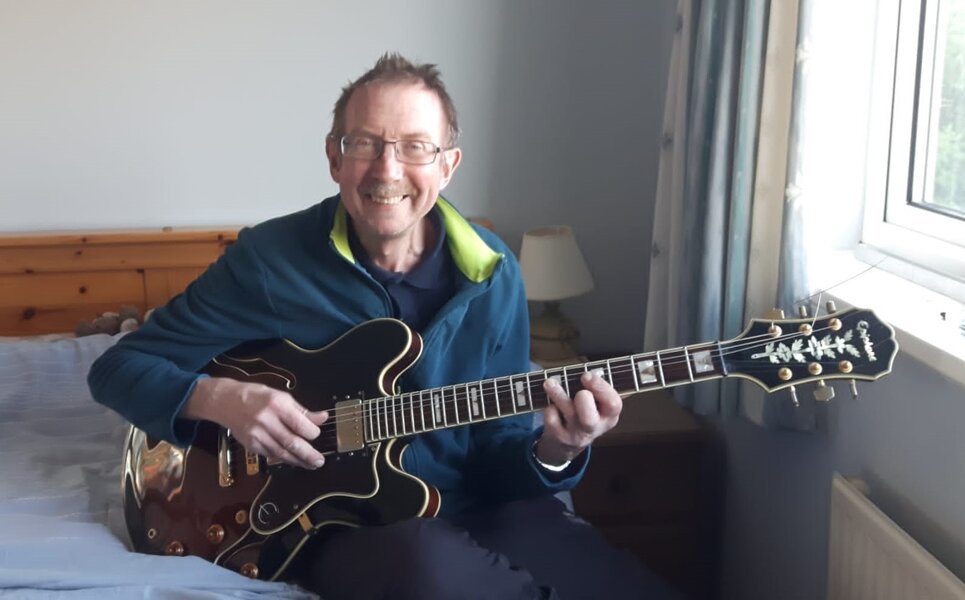 Some great views of the Malverns (and the shiny guitar’s not bad either). Good work getting out - I’m also enjoying these sunny cold days which are popping out of the grey now and then.

EXOTICA! 1989 Diamond Back Ascent (the boring one) Pathcrusher