Kona Fan
So how often do you retrobike? This is no garage queen by any means. I commute 5 days a week on my steel horse, clocking up around 100-110 miles a week. Then when the weathers better and when I get bored of running, she's my weekend rider out on the Kent downs.

So, other than the frame, forks and stem, nothing is "retro". The drivetrain and components have got to be practical and, where possible, hard wearing. This proves a lot harder than you'd think. Even with weekly deep cleans during the winter, I'll get through a cassette and chain every 3-4 months, bottom bracket every 6 and cranks and chain rings every 12 or so.

This is it's latest guise where I had to bring forward the annual MOT forward. She's got a new drive train plus cables and shifters. She was sporting X9 gripshift but I've finally given in to normal shifters. I treated her and my arse to a new saddle - to be fair the last one was 4 years old - and grips.

As a commuter, she absolutely flies; I'm guessing she's sub 24lbs (very high tech weight test with the 97 Explosif). On 1.25 tyres she's nippy and with 48T up front and my crazy looking legs, I'll keep up with the average cycle nazi, I mean carbon-freak Trek racers

Her identity is a bit of a mystery. I bought her from Charlieboy back in 2011 when my 1997 Cinder Cone gave up the ghost (viewtopic.php?f=6&t=56486). She's had the rattle can treatment which to be fair has been extremely durable. It'll last a couple more years then I'll treat it to something new. She has the top routing for the rear brake only and bottom for everything else which, I think makes it a 1996 but then that had the dog collar cable routing thing on it. Of course, it could also have been a Lava Dome since they share the same frame but it's definitely not a Fire Mountain or Hahanna as the geometry is the same as what I had before.

To compliment it's unknown origins, the decals are a complete mixture of 1997/96/95 with some non-specific colour schemes. 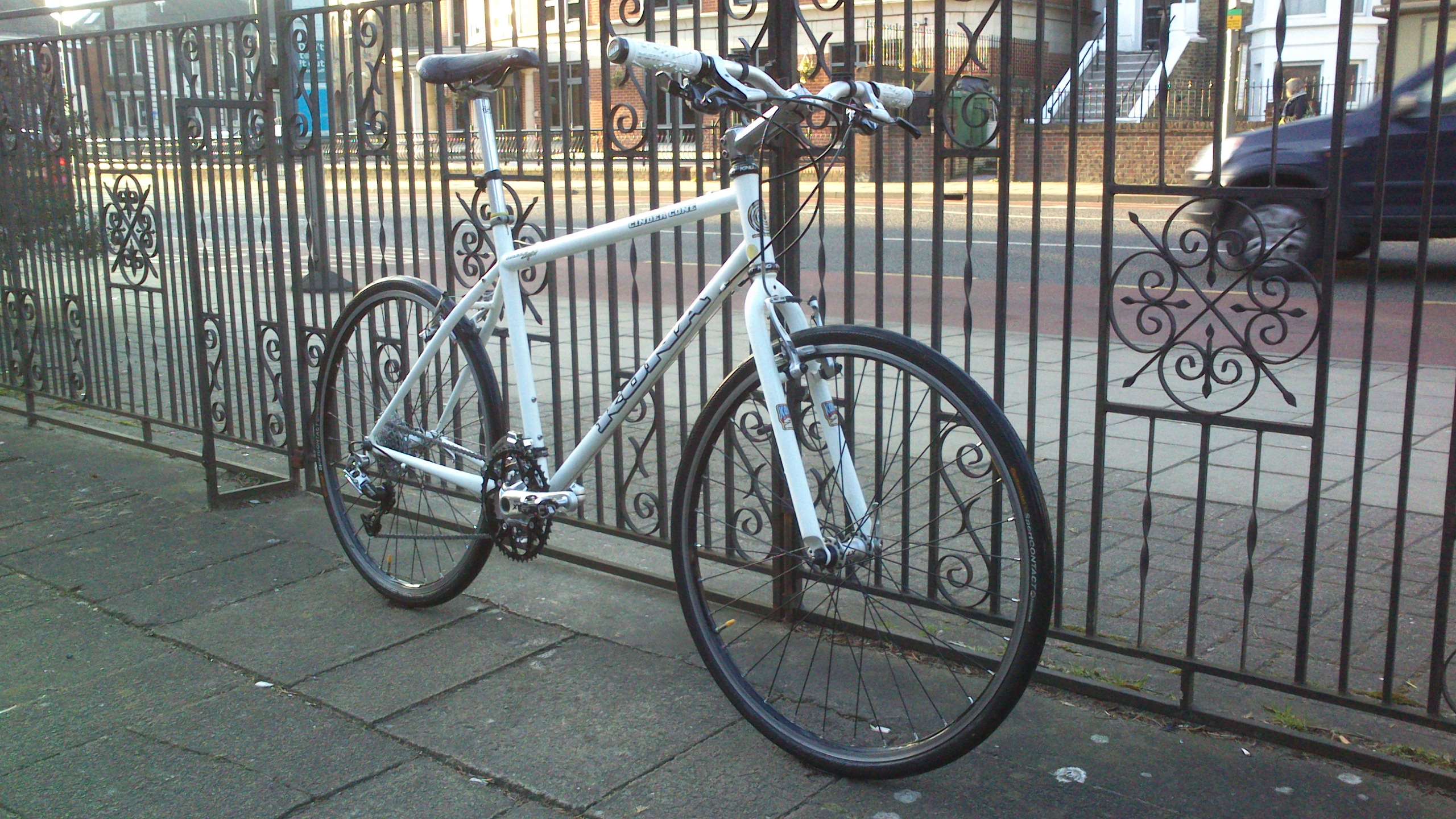 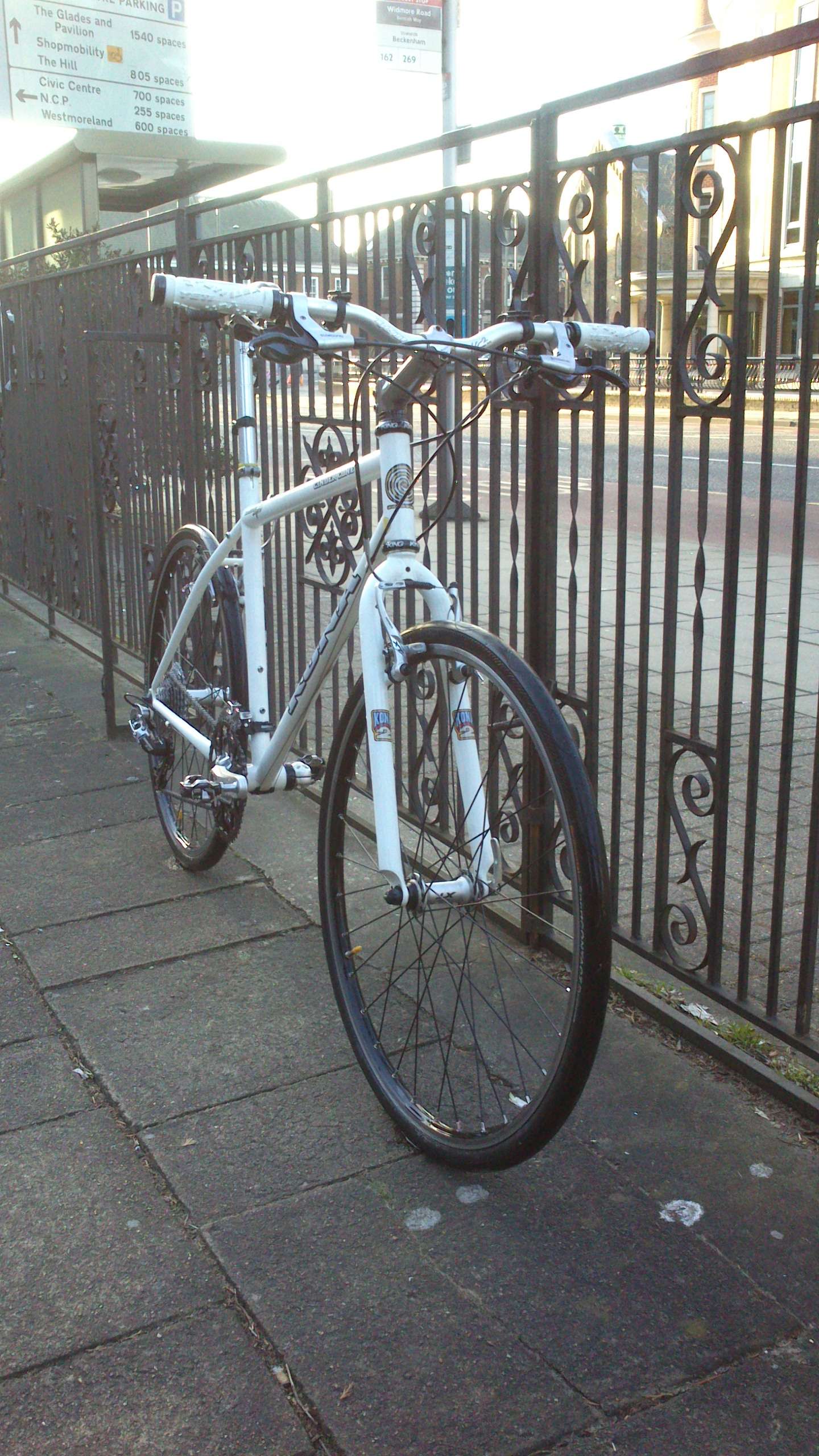 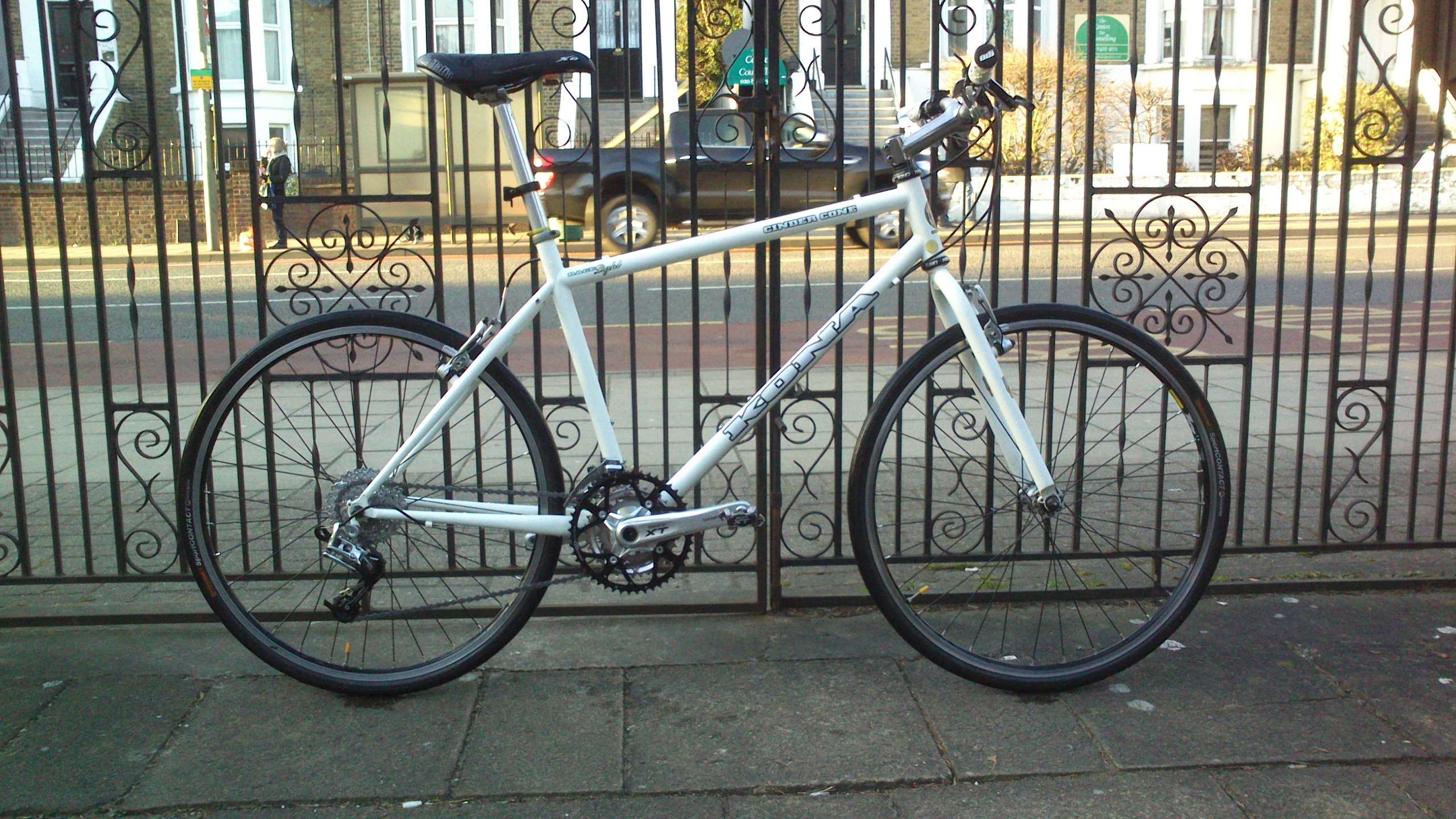 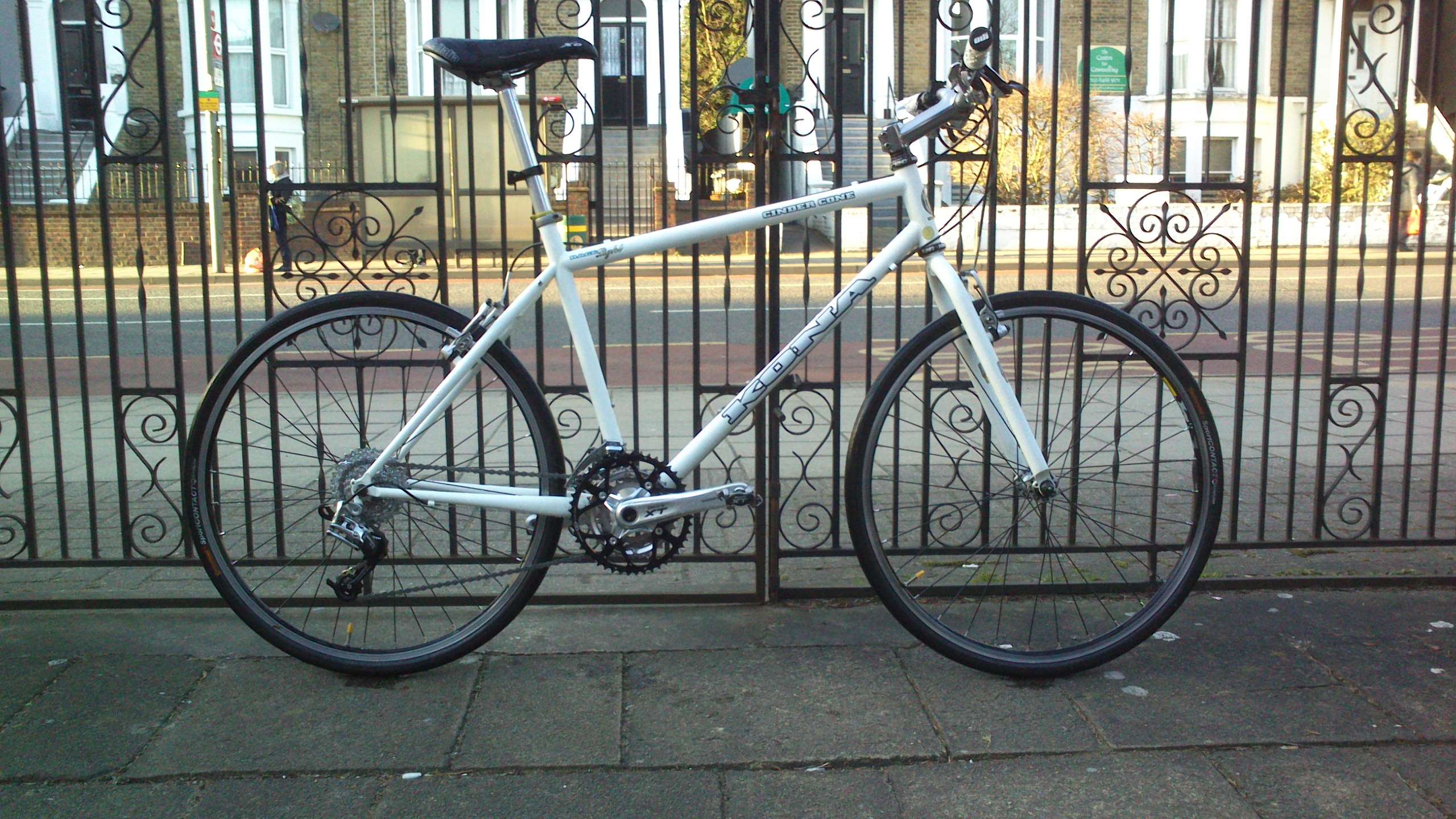 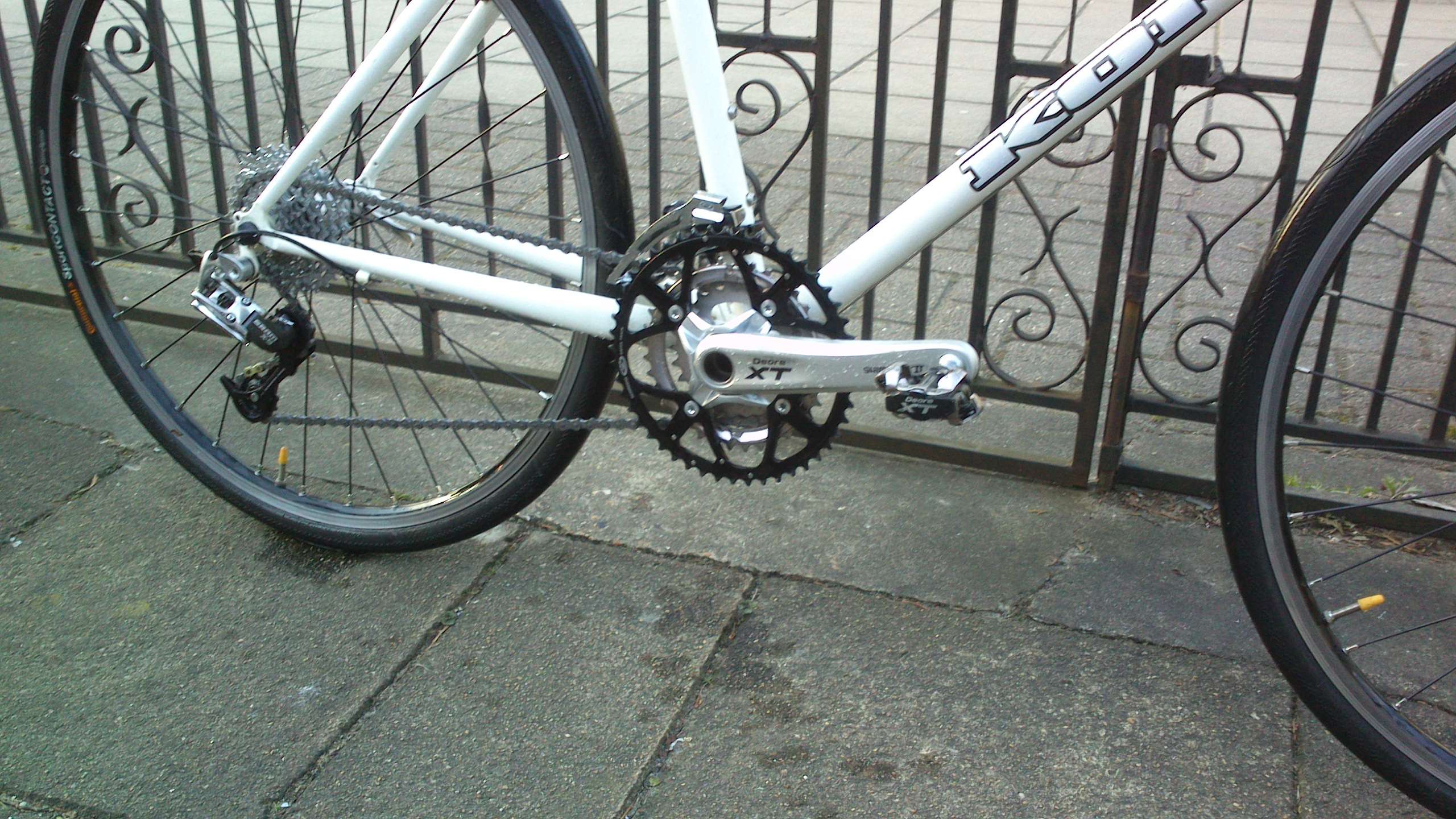 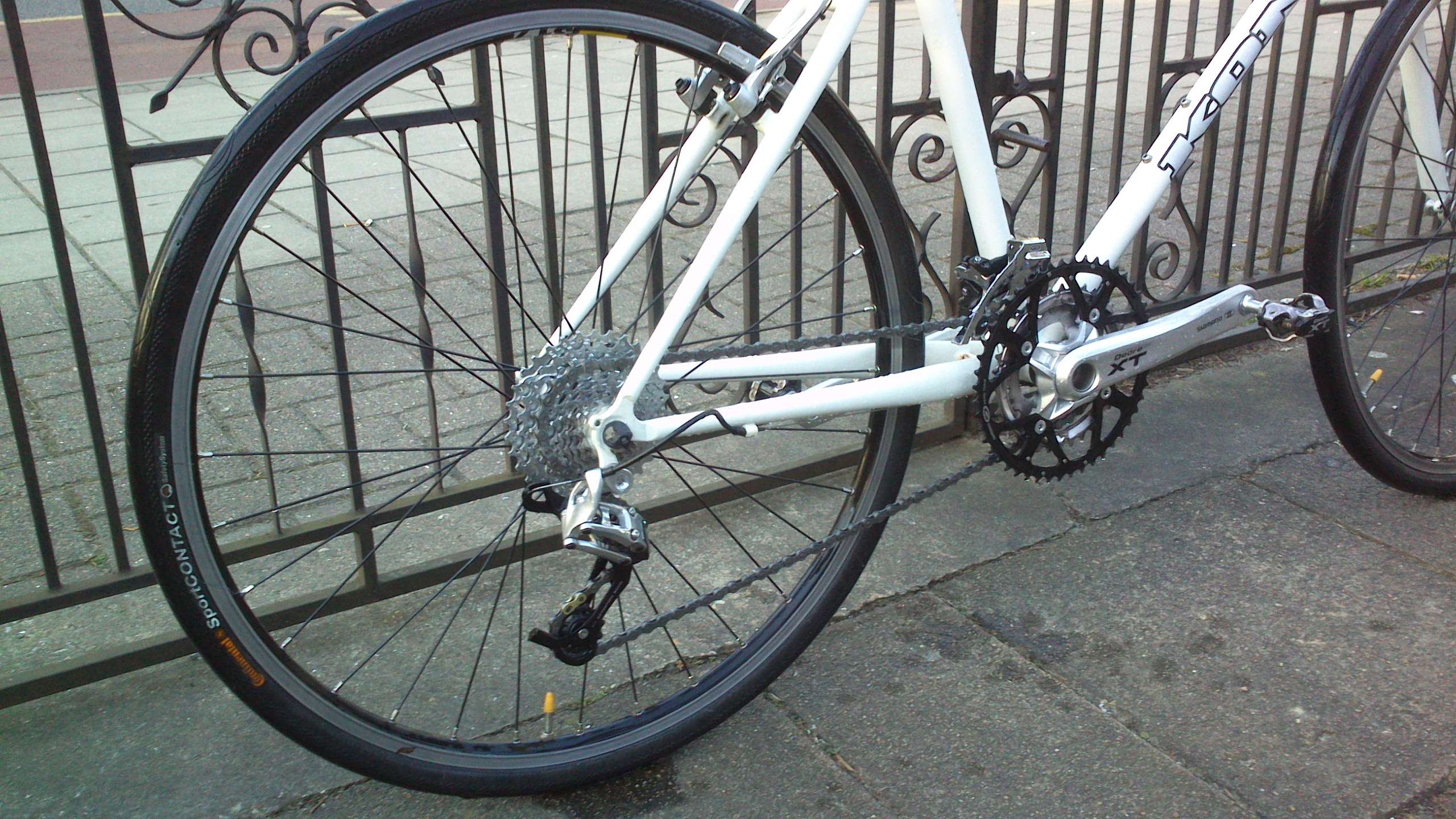 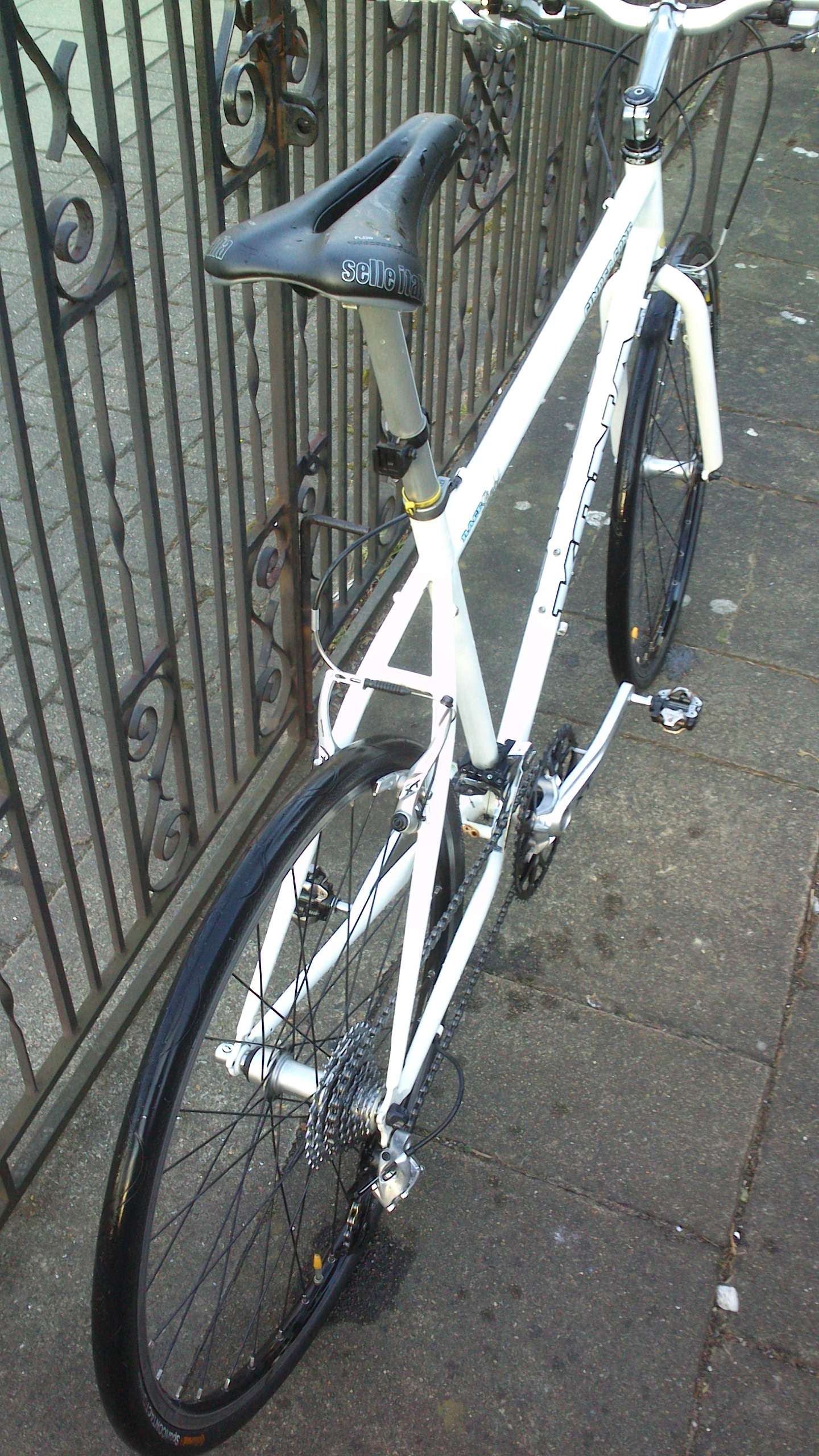 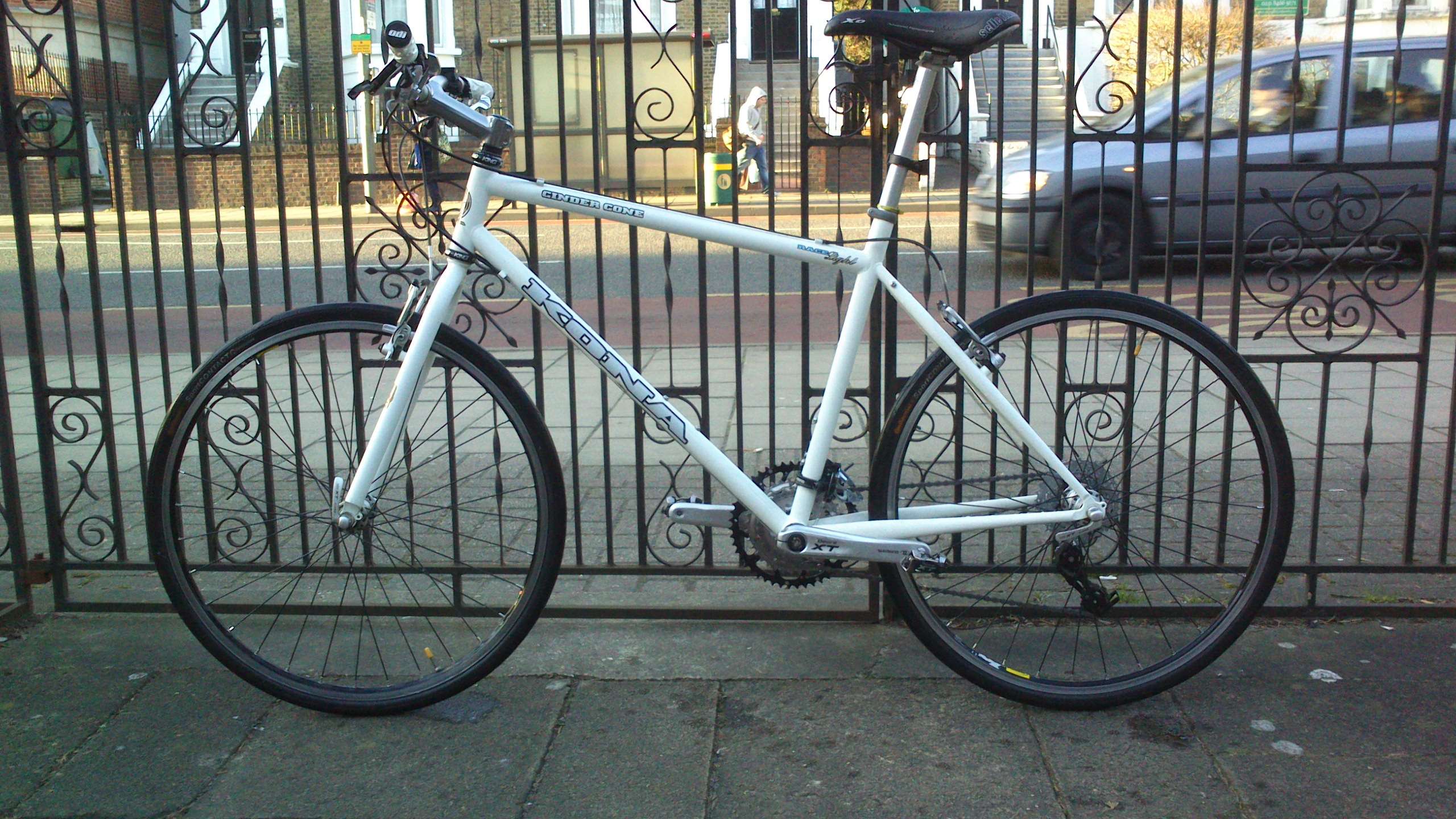 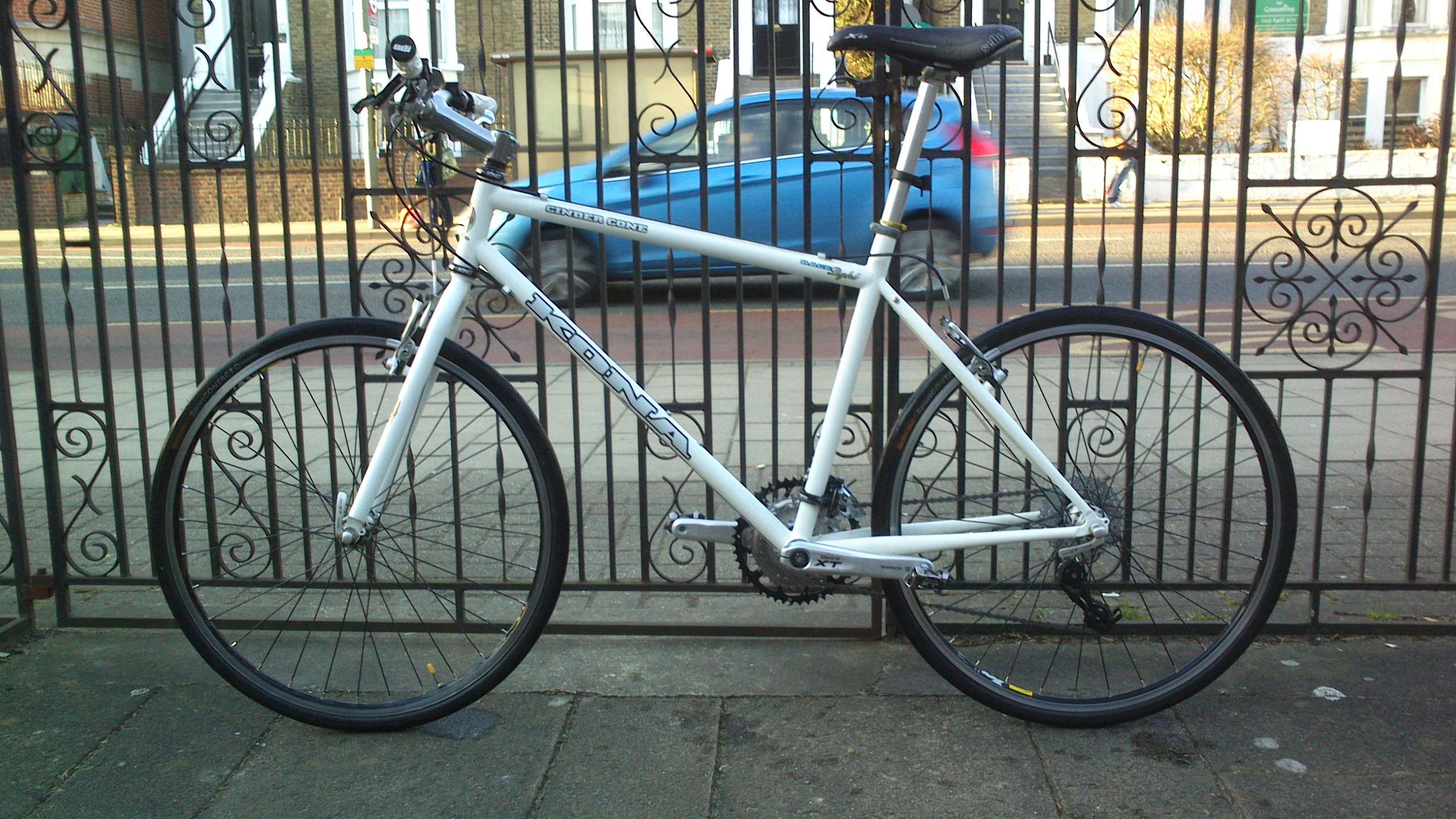 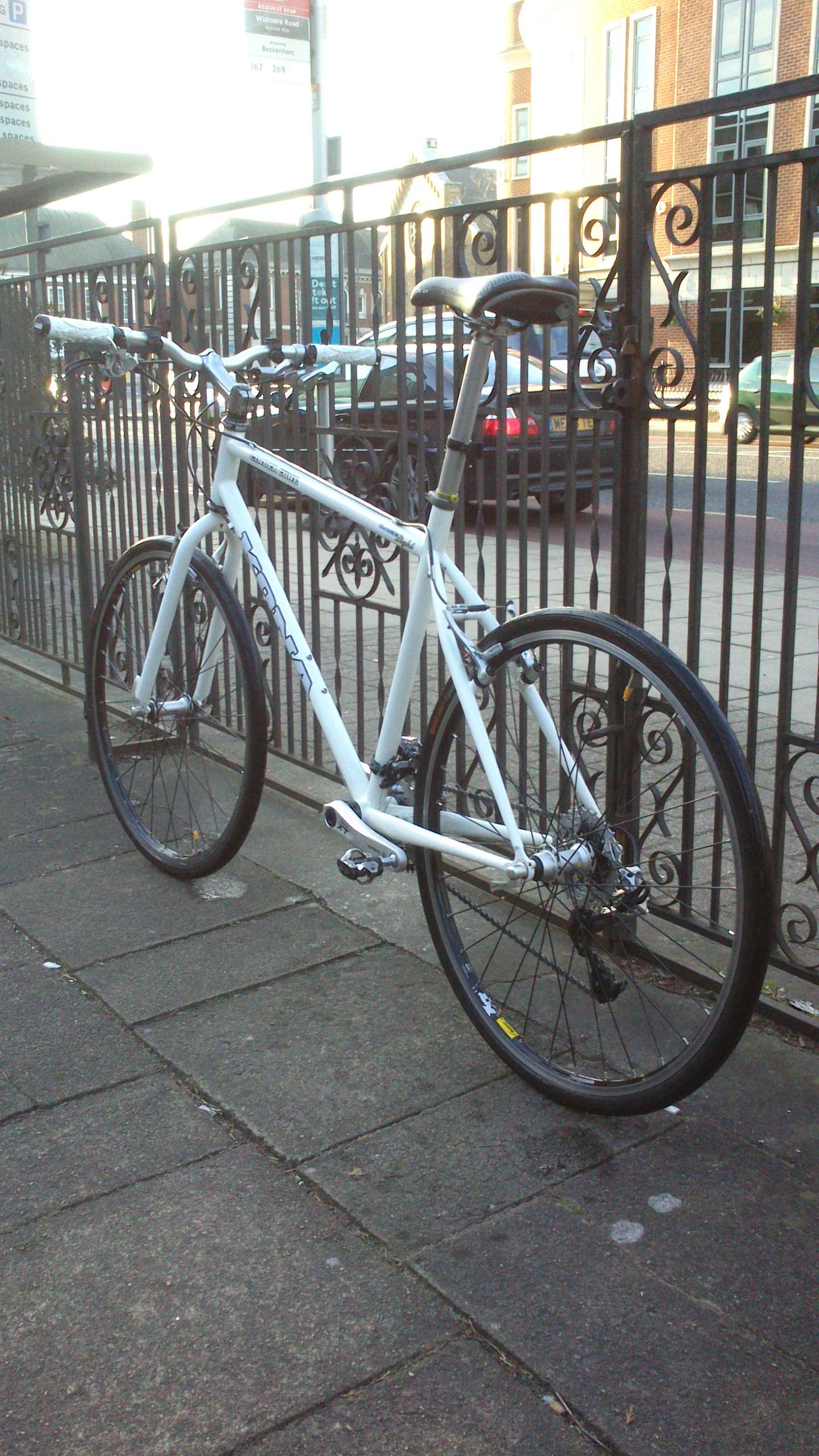 Even though she has an identity crisis, I fucking love this bike. It's my #1 means of transport (I haven't owned a car since 2002) and get's me safely to and from where-ever I go (touch wood). We've been through hail, snow, rain, baking sun, stupid gale force sea winds...and come out the other side. We've even had the odd "nice bike" comments at red lights.

To the posters who queried slicks on MTB's - this is why we do it so we can use our steeds every day. Try it out - you might like it :!:

I love it when people dont read the details, see V brakes and 9spd stuff on a bike and automatically jump on the "its not supposed to be here" bandwagon


Its a lush bike you have built there dude, and when my Cindercone gets sold, the Kilauea will be my prime transport, so will be sporting the obligatory skinny slicks and P2's as well

I love it when people dont read the details, see V brakes and 9spd stuff on a bike and automatically jump on the "its not supposed to be here" bandwagon


Its a lush bike you have built there dude, and when my Cindercone gets sold, the Kilauea will be my prime transport, so will be sporting the obligatory skinny slicks and P2's as well

Cheers for the feedback though - personally I wouldn't go with anything too fancy frame-wise on my commute; it's too rough and ready and I'd die a little bit riding something like a Killy as the salt and London grime slowly eat it away into dust...

Kona Fan
...which is pretty much what has happened for she is dead. Proper dead.

Back when these shots were taken in March I noticed a tiny break in the paint on the seat tube just above the front mech. I put it down to some tired paint as there was a bit of bubbling elsewhere. I had a view that she'd get a proper strip down and re-finish in the winter.

Fast forward to a few weeks back when I started to hear an odd knocking sound everytime I put the power down. A quick check revealed how the small break had turned into a full scale crack almost joining itself around the tube :shock: Picture to follow.

So she's been stripped down and a donor frame is on it's way. Sad times I got 3 excellent, solid years out of her. I rough estimate says we probably covered between 8 and 10k miles :shock:

Kona Fan
And here we go. Has anyone else ever had a frame fail in this spot? It's an odd one. Previously I had a break on the rear triangle by the mech hanger and before that with the RTA, on the top of the seat tube with the weld to the top tube. 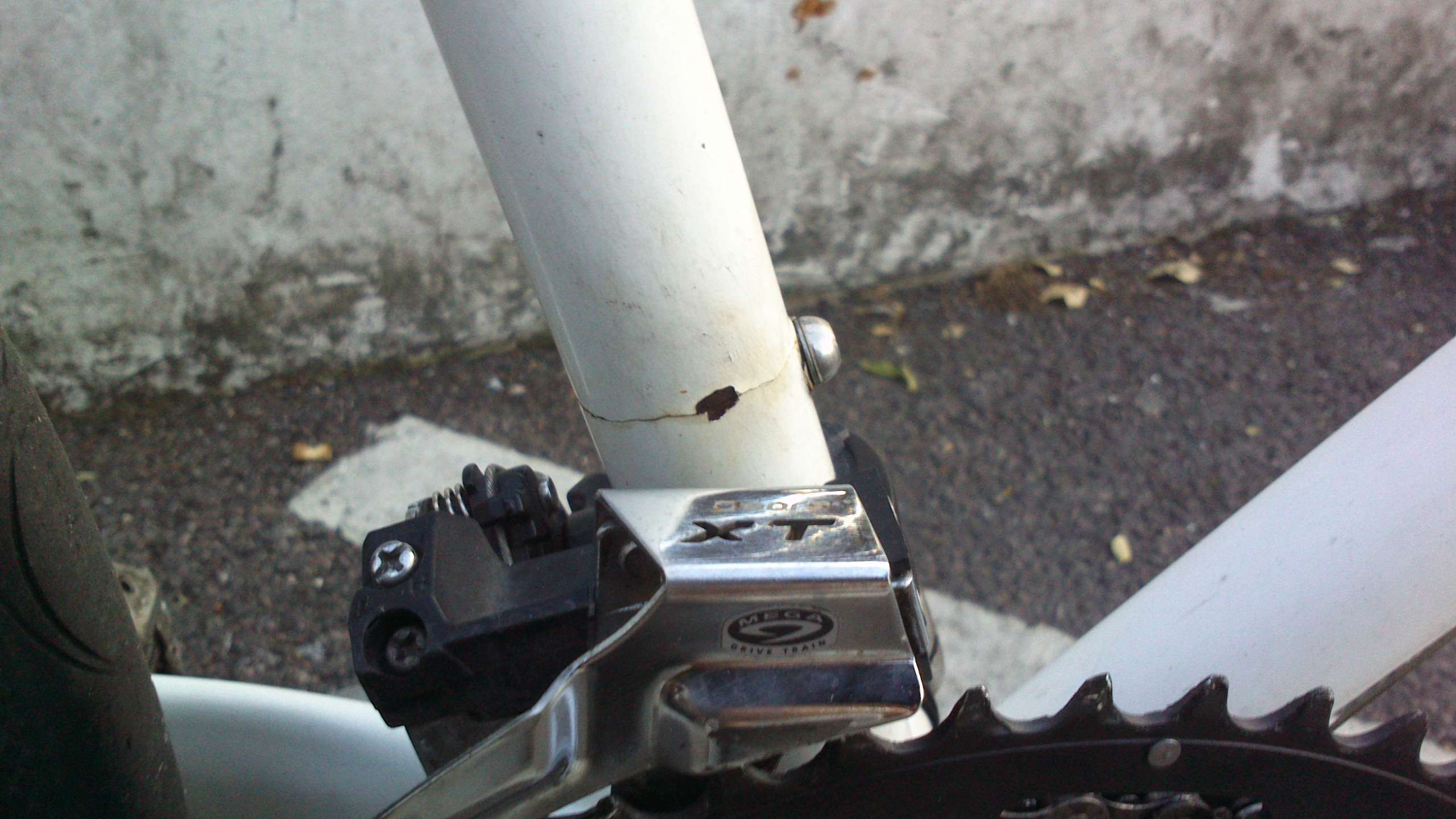 It started where I've chipped the paint away, not at the bottle cage bolt.

Sorry to hear about the CC. My original '94 CC also broke the chainstay at the drive-side dropout sometime in '97. Luckily Second Level Sport (Kona dealers at the time) replaced the frame free, but only had a '97 Kilauea left in stock (result!!!).

I was using a '95 CC (ebay-ed from its original owner about 18 months ago) for commuting 135 miles weekly up until 3 weeks ago, when I was unceremoniously launched 30' up the road by a car that didn't stop at the roundabout I was negotiating. We both (me and the bike) survived, more or less, but the bike now has two dents in the top tube, a destroyed rear wheel, and apparently a misaligned frame.

So while getting over the pain and inability to ride I checked eBay for a replacement and scored this absolute beauty.

Trouble is, how can I abuse such a gorgeous beast by riding it to work every day? :|