Can anyone expand further on what we know regarding the serial number format on Kona Titanium frames?

Recap:
The Kona Titanium frames from 1991 to 2000 were made by Titanium Sports Technologies (TST or Ti Sports) in Kennewick, Washington State. My understanding is that Ti Sports were responsible for the frame’s serial numbers. This information comes from someone at Kona, Vancouver who was relying on his memory after I contacted him recently. He was working for Kona when these frames were made, so let’s assume that his memory is correct.

It appears that Ti Sports ran out of the 3 digit serial numbers at 999 in 1997, so rather than going to 4 digits, they started again in 1998 with a different prefix.

The 1998 to 2000 King Kahuna frames have a prefix of “KK” and follow the same format as all of the above, although my records show that Ti Sports zeroed the 3 digit serial number again; e.g. KK18034

The ultra rare Score was made for the 2000 line-up, but had its production halted mid-season, so there are very few examples out there. These have a prefix of KS, and then follow the same format: e.g. KS18009.

Ti Sports used the 3 digit sequential number through the years of production, but there seems to be no particular start number or end number for each of those years: i.e. if 1994 frames happened to end at number 725, then the 1995 model would commence at 726. This explains to some extent why it is not possible to directly date a frame from its serial number – just a general collection of knowledge of what numbers ended up being used during any particular year of production.

Kona have documented on a Timeline that they produced 4,000 Titanium frames over the 10 years from 1991 - 2000, which average out at 400 per year. This would vary greatly from year to year during the decade, particularly when the King Kahuna was introduced. I will reference that figure later.

Here’s The Rub:
Did Ti Sports use each 3 digit sequential serial number only once across all frame sizes?,
OR
Did they repeat the 3 digit serial numbers but with the frame size prefix keeping it unique?

To date, I have never seen any 3 digit serial number repeated across two (or more) frame sizes, but this causes an issue that I recently discovered…….

All is clear so far; you can see how the sequential numbers progress through the years.

This sequence method would mean that serial number 054 is also on a 19” frame, presumably made in the first year of production as they got to serial number 463 by 1993 as seen on my example on file. Referring to the 4,000 total again, we can assume that the numbers produced of each frame size in an average year of 400 are approximately:

This would be in keeping with relatively low serial number of B16054 on the 16” frame not appearing until 1994.

Thank you for the info pip, very detailed and informative

So my 1991 Hei Hei frame number B17001 may not be the first made of that year but certainly the first in that size?

If only we could source every one made.


Minifreak":235n0ris said:
Thank you for the info pip, very detailed and informative

So my 1991 Hei Hei frame number B17001 may not be the first made of that year but certainly the first in that size?

If only we could source every one made.
Click to expand...

I would say that your frame was indeed made in the first batch produced by Ti Sports, and for that reason alone is something to be cherished .

I hope that it doesn't deter too much from its uniqueness, when I say that Ti Sports did start at "000" - well at least they did when they zeroed the sequential serial numbers for the King Kahuna in 1998. I almost didn't want to show you this but...... 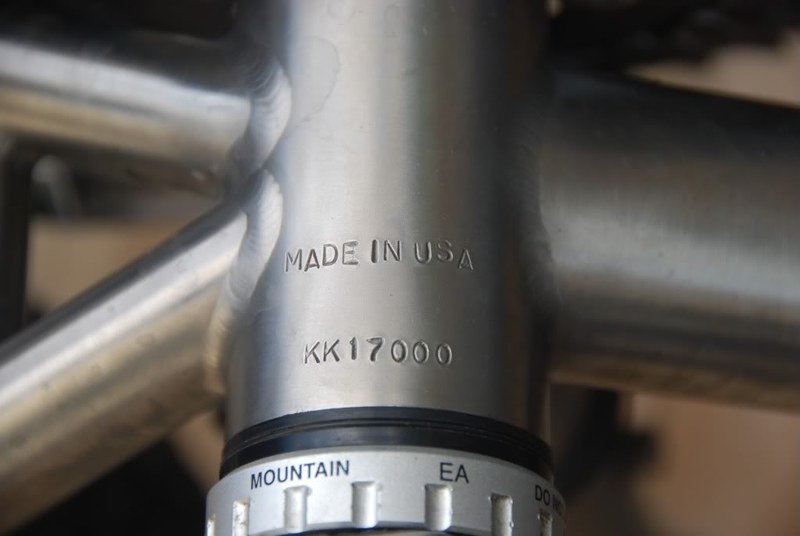 No worries, doubt B17000 will ever surface

Always wanted an early 90’s Kona as to me as a young teenager they were the bike I wanted, having a Ti one is the icing on the cake!

Interesting, maybe it was sequential per frame then and not by each size

Thank you for your help with my thread.

Are you saying that you currently own a Hei Hei that was sold new in Germany in May 1992?

If you struggle with adding pictures to a post on here, or if would prefer not to reveal the serial number to the www, you are welcome to my e-mail address.

My first HeiHei serial number was 16007. But the rear dropouts got bullets like 1993 and really early 1992 HeiHei got different dropouts with Mc Mahon/ Sandvik design

So, are the last three digits infact a simple TST sequential number for whatever frame they produced regardless of brand?


Woz":29hu656r said:
Interesting. I too understood the serial number was a TST thing. The DBR Axis TT serial number is the same format.

So, are the last three digits infact a simple TST sequential number for whatever frame they produced regardless of brand?
Click to expand...

Mmm, yes I was going to add something to that effect, but I didn't like to clutter up my original post too much!

My Score frame has a really high serial number considering how few they made. The chap at kona who I chatted with came up with a suggestion as to why that may be, but you seem to have pre-emptied what I was going to add to this thread regarding what he told me.

Crikey, I hadn't considered that as an explanation. I'll do a bit of calculating, and get back to you on that one!

Pip.
You must log in or register to reply here.