This time it's a corker of an Enigma built Hot in Purple with Green Flames. It also supports the evidence that there was a massive gap in production of the 1998 Hot for 13 months.

Retailers were being told by Kona at the time that there was a problem with getting hold of the 1998 Hot, due to manufacturing issues. I have a massive documented piece that I cobbled together regarding what I think actually happened. This covers everything from the inherent problems with welding and Cold Setting Reynolds 853 tubing, through to Jeff B at Enigma reporting that Reynolds had a problem supplying the (fairly new at the time) 853 Tube Sets.

Anyway, it would appear that Enigma's Contract with Kona to build 100 Hots (and 100 Kus) was honoured, and that only a few Hodaka frames were welded up using full 853 Tubing sets to complete some outstanding orders of the 1998 Hot.

I’ve a done an edit to the Hot Serial Number List on a couple of entries. Firstly, I now have a set of pictures for a Tom Teesdale frame that I only previously had a shot of the Bottom Bracket shell and Serial Number. I can now fill in some detail of colour fade and Dropouts.

The other entry is for what appears to be the earliest example of a 1993 frame.

I now have a few low-resolution pictures of the whole bike, and one of the Bottom Bracket shell that vaguely displays the Serial Number. Unlike the other two models in the Kona Custom Program at the time, the Haole and the Hei Hei, the difference between a ‘92 & ’93 Hot frame is very subtle – unless someone can advise me otherwise

. If we could be certain that this entry is the earliest ’93 frame that we know of, it would help to keep the List accurate - which would be nice!.

I am usually very good at deciphering a Serial Number from a picture (it used to be part of a former job of mine) but this one is a real challenge. My current interpretation is TET 222, which would be in keeping with Tom’s Serialisation.

I’ll pop this (only) picture up here for now, which was taken in a mirror while the bike was in a workshop stand (I reversed the shot here) and I understand that there is still a slight chance that we may obtain something clearer. Meanwhile, if anyone has some better forensic methods than my 63-year-old eyes, then please do chip in

Mortonm said:
I can do no better than 222
Click to expand...

Yeah cheers Michael. Without influencing anyone, I will be interested to know what other members think distinguishes between the '92 and the '93 frames.

Okay chaps, cheers for that. I have listed it as:
TET 222 - 16” 1993 Yellow - Triangle cut-out Dropout.
This currently places it as the earliest example of a 1993 frame, which I think is a significant entry on the List. 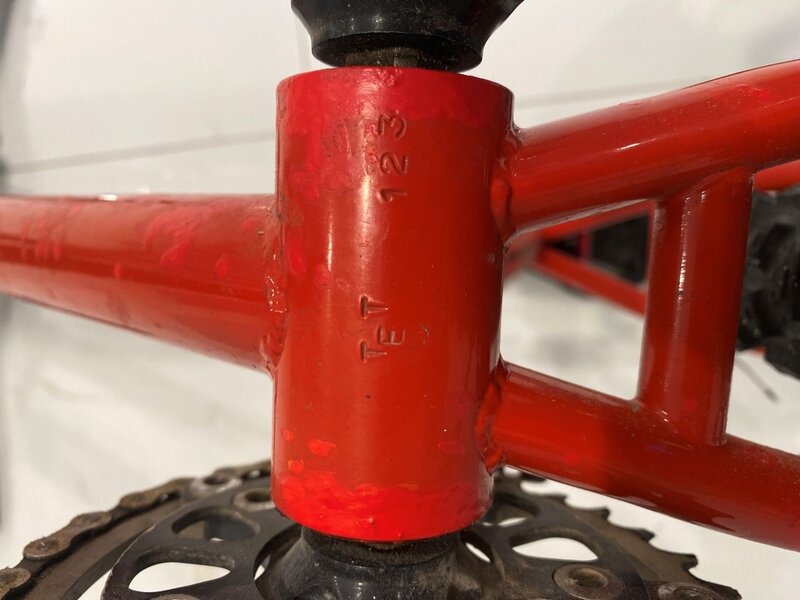 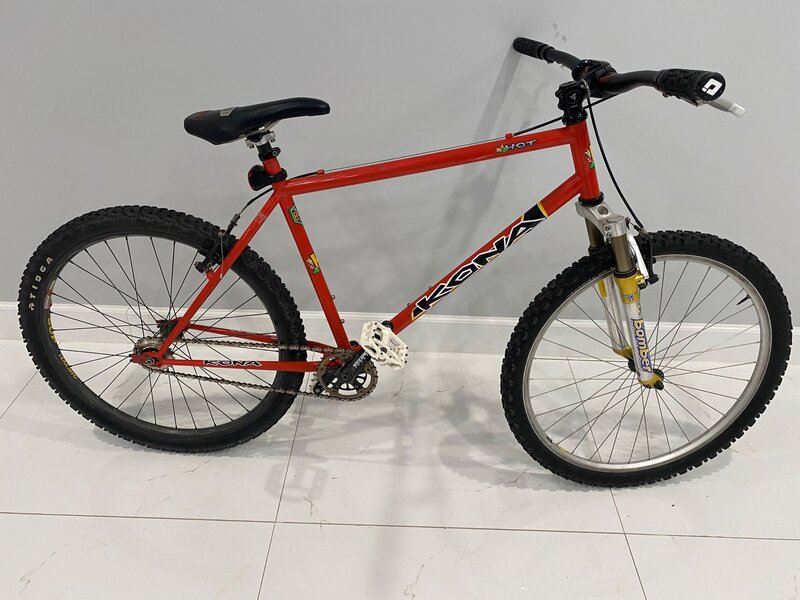 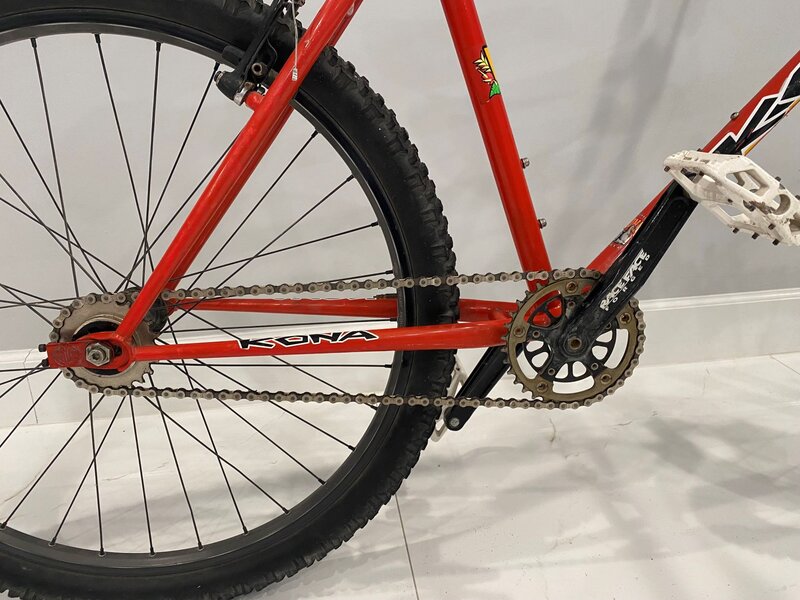 You see many single speeds? TET 123

Certainly a weird mix I'll leave conclusions to others but I've never seen dropouts like that on a Kona. My brodie Sovereign has scalloped ones similar.

Tom made frames for other bikes ? Or maybe it had new dropouts added. The decals are for sure not original as he was done making Hots long before those

Thank you for this Big Blue Sea, and welcome to RB: Well blimey, as you say Michael, a weird mix going on here.

Tom only used a variety of Tange Tubing for the Kona Hots that he built, so goodness knows what that Reynolds 853 Decal is all about.

Tom did indeed make frames for other manufactures; I have a Jamis Dragonfly TET 042 on record. If his sequential numbering runs in the order that we have assumed until now, then TET 123 dates the production of this red beast as 1991, regardless of which manufacturer he was building for. Reynolds 853 was introduced in something like 1996, so again it wouldn't have been available in 1991 when this frame was produced - albeit that the Decal is accurate - we can only assume that it is probably not!

The rear Top Tube Rear Brake Stop has to be an addition, as a 1991 frame would have still been using Canti brakes requiring a Dog Collar or a Cable Noodle; and were Single Speed Sliding Dropouts a thing in 1991? The Explosif featured them by 2004, but I know very little more than that.

Well apart from the 1997 Head Tube & Top Tube Decal, and the 1999 Down Tube Decal, I seem to have rather cluttered and confused the identification of this frame

Kona Fan
Its gotta be as simple as it qas redone a decade later or something. Heavily touched up paint. Whatever decals at hand snd modified for single speed.

Here are the dropouts on my brodie. Some resemblance. It too is a mix of prestige tubing but I sont know if the dropouts were made by Brodie or if he sourced them 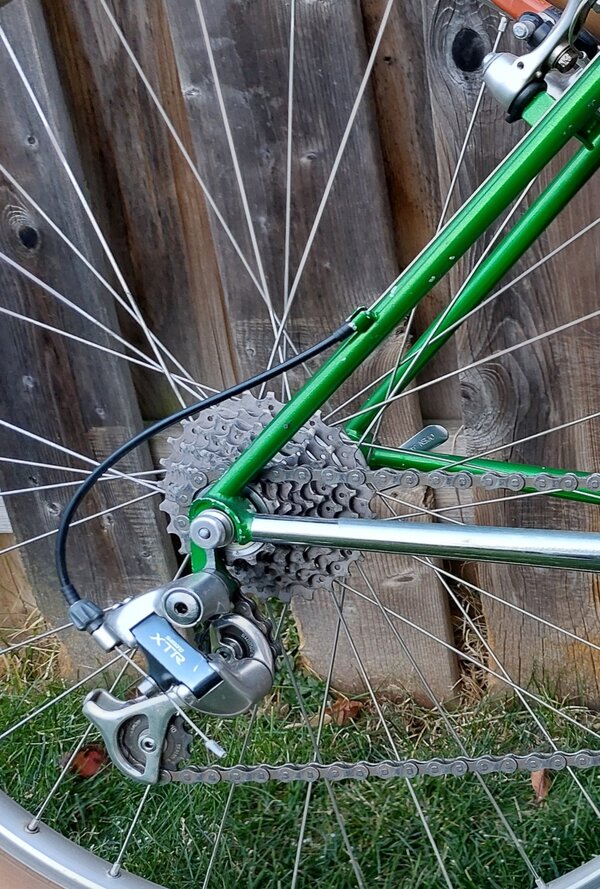