I went to the big international trade show Interbike on behalf of the Marin Museum of Bicycling and the Mountain Bike Hall of Fame. They needed someone to drive a truck with the exhibit to Las Vegas and set it up. That fell neatly into my rock band roadie skill set, so I said I would do it in exchange for the hotel room during the show. Since I also have a trade show skill set, once the show started I worked the museum booth like someone who might have done it a few dozen times.

Paraphrasing Jeff Spicoli, all I need are some tasty waves, a cool buzz, travel and lodging covered, an "Exhibitor" show pass and a base of operations inside the show, and I'm fine.

I've been going to bicycle trade shows since 1981. I do not care about what other people are selling, I'm not there to buy anything. I'm selling my own stuff and I'm talking bikes. I walked the floor briefly, just to see a few of my friends who had to stay in their own booths and couldn't visit mine, but the real fun was hanging out at the museum booth with the 1882 penny-farthing and the battered 1941 Schwinn Repack Downhill winning bike, and seeing who came to me.

The building is big enough to have two Postal Codes and different weather at the other end. We had a great location, just inside a main entry door, so traffic was plentiful. Most of the display I set up was from the Mountain Bike Hall of Fame, which suited me very well. I am a charter inductee and that's a good conversation starter.

Like everything else in Las Vegas, the gaudy, overlit, frenetic capital of western excess, the trade show is a multi-sensory competition for attention, not much different from the casino just outside the doors. Video screens, bright colors, thumping recorded music, flashing lights and buxom models in skin-tight Lycra are the norm. The background noise is thousands of shouted conversations being carried on simultaneously. Attendees are so used to being accosted that they walk briskly, eyes front, to avoid unwanted engagement.

The trick here is to break through that conditioned resistance. There is no way for the subdued museum exhibit to compete with the colors and the cacophony, so we went in another direction.

Since just about every bike on display at the show was next year's model, the very used bikes of yesteryear that we had were different enough to make people glance over and slow down from their brisk pace. We parked the bikes in the aisles so people had to look at them just to avoid tripping over them.

I profiled passers by and selected my victims carefully. Tattoos, piercings, dreadlocks and torn clothing gave away hard core mountain bikers, which almost made it too easy. Some mountain bikers attempt to camouflage themselves as normal people, so you have to look for more subtle indications, such as a t-shirt with an obscene message in big letters.

If a juicy target doesn't look or slow down, you can say "Stop!" in a commanding tone. People will jerk to a halt and look at you out of sheer surprise, perhaps thinking they are being saved from some unseen falling object. This is an advanced trade show technique that should not be used by amateurs, because you have to exploit the brief window of opportunity.

However it is created, a moment of hesitation is all I need to make the tackle. My trade show reflexes are honed from long experience. Reading their home location on the show pass hanging around their necks, I say something like, "Hey, you're from Vermont!"

It's almost like they can't figure out how I knew, maybe I'm from there too. Proud of their home and wanting to know what's next, "We sure are!"

I set the hook. "I had an awesome week riding at Mount Snow, how far away from there do you live?"

Nobody snubs you when you ask that kind of friendly question. They can't help themselves, it's just human nature. "We're only an hour away. We go there a couple of times a year." Suddenly we're chatting like old friends about something we have in common. If I can engage someone for more than a couple of minutes, 80% of the time I can sell a copy of my book, Fat Tire Flyer. The other 20% already have it.

Joe Breeze is the curator of the Museum, so he hung around the museum booth when he wasn't pushing Breezer bikes at his commercial booth. He got a lot of attention from his admirers, which created more targets for my pitch since his name is also on the cover of the book. Instead of wearing out my feet trudging mile after carpeted concrete aisle, I hung around and let the bike world come to me. I could even sit down if I wanted, which beats trudging for nine hours a day.

After the show closed at the end of the first day, the Mountain Bike Hall of Fame induction ceremony brought out a lot of my friends. It was followed by a big dinner with someone else picking up the tab and a table full of lifelong mountain bike people. Bummer.

Next night there was an invitation-only open bar reception where Everybody was Somebody. I validated my Somebody credentials by getting the nod. The free alcohol was followed by a fabulous dinner, after which we were punished for our attendance with a forgettable awards ceremony. ("Most Customer Value for a Local Bike Store, and the nominees are...") Actors Dennis Christopher and Dennis Quaid, the stars of the 1979 Oscar winning bicycle film "Breaking Away," made an appearance. I said howdy to Dennis Christopher whom I had dinner with a few years ago at a remarkably similar bicycling awards dinner. He may go to more of those than I do.

I don't drink, I don't gamble, and outside of the bike show, Vegas has nothing else I am interested in. My livelihood does not depend on my performance at the show so there is no pressure. Everyone else there is on an expense account so you never see the dinner tab. For three days I talked bikes and hung with the glitterati of the US and world bicycle community, a three day party with a few hundred of my closest friends and only one subject of conversation.

Day three, the show is winding down, a worn out sales rep asks me, am I tired yet, I tell him I could do this for another week.

Thanks for the write up.
Any pics of you and the booth to share?

ON a side note.....after seeing Breaking Away as a Kid I wanted a Masi soooo bad!
L

Excellent write up and perspective, brings back memories, having been there about 10 (?) Years ago. 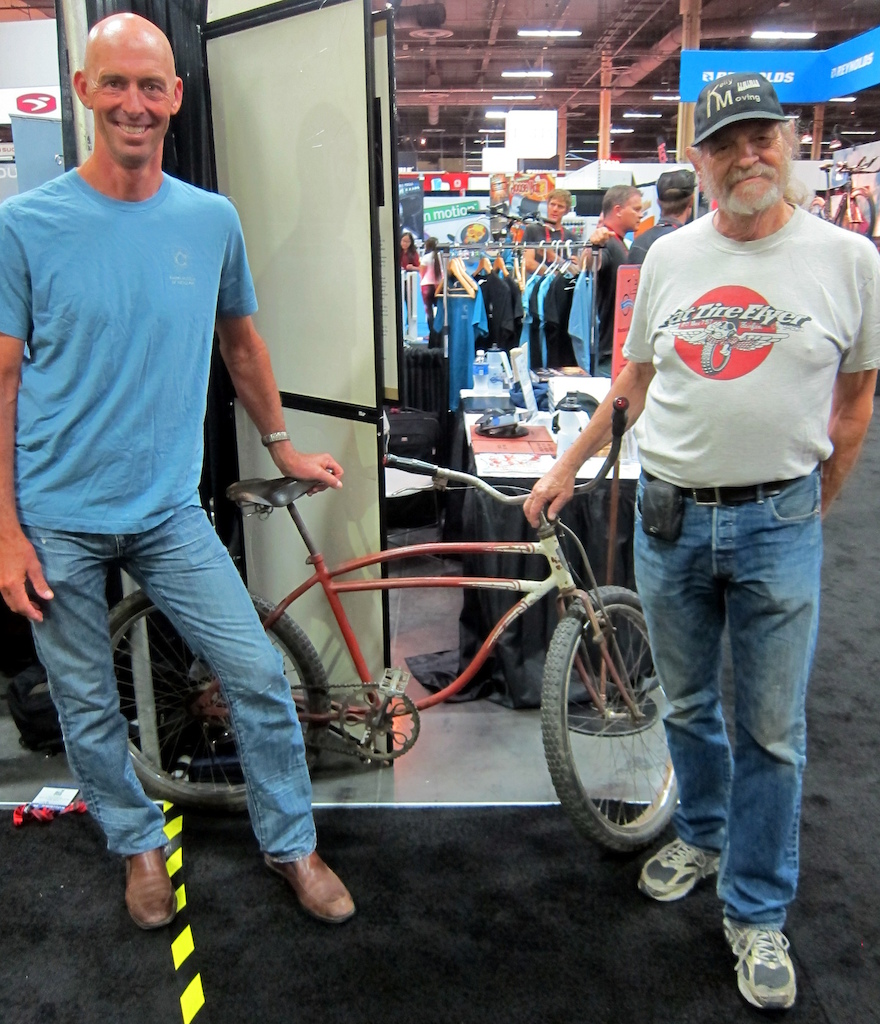 Pioneer riders and bike makers - and two of the greatest guys I have had the pleasure to ride with: Otis Guy and Charles Kelly pose with one of the klunkers that Otis raced in the early days of the sport.
Click to expand...

Great writeup as always! Remembered myself of the days i worked for the Benelux importer for Rock Shox, Giro Merlin and most of the exotic brands. We also had 2 or 3 three tradeshows a year. Good fun, but i was dead after one weekend!
You must log in or register to reply here.

Is bike shop and customer service an oxymoron?
3 4 5

A Pilgrimage to Mt. Tamalpais and the Marin Museum of Bicycling
2 3 4