I would like to introduce to you a very special GT. For some even the holy grail.

A. History
In the 1989 catalogue a new top-of-the-line bike was featured - the Xizang. It was placed above the Team Avalanche and was built from filletbrazed Tange Prestige steel at Toyo/Japan. It was the first catalogue bike in the world to be equipped with the Suntour "BEAST" electronic transmission for the front mech. Like all early GTs it had a funky paintjob, called "Spider Webbing": 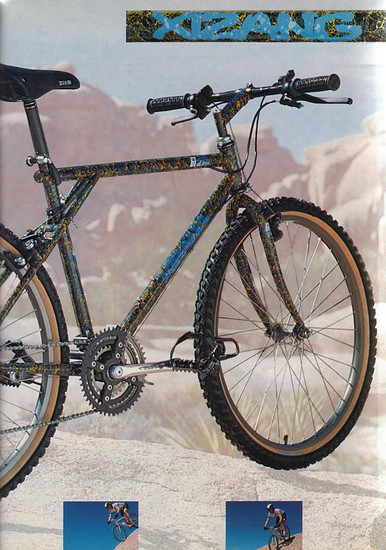 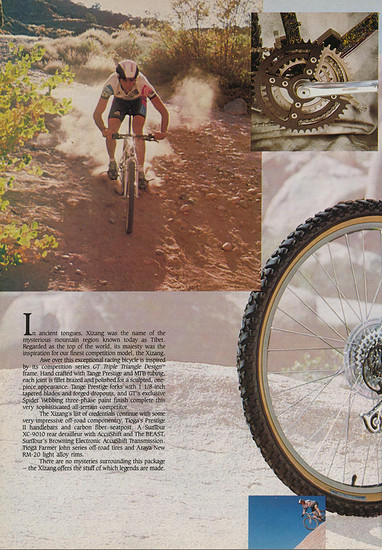 Apparently, the B.E.A.S.T-gearing system could not be delivered by GT. According to the flyer of the Xizang Re-Issue of 2012 the bike never went into production:

1989
The initial Xizang was a complete bike model. Its position was
at the very top of the 1989 model year range of the GT All
Terra line. It featured a Tange prestige fillet brazed frame made
in Japan and the revolutionary yet ultimately doomed Browning
automatic transmission. This model, while featured in the 1989
catalog, never made it to production due to the non delivery of
the Browning transmission.

1990
The complete bike was scrapped and development started with
Maurice LaVoie in Canada. La Voie had close ties with Sandvik
tubing. 20 years ago very few Ti frame fabricators existed for the
simple reason that no Titanium mfg made tubesets specifically for
cycling. Existing off the shelf tubing had to be adapted to the use
making sourcing very difficult. LaVoie has experience and ties
with Sandvik enabling him to source the small amount of tubing
needed and to weld them.

1991
Production
The original Xizang came in two different models. The Xizang
LE and the Xizang. The initial production came from a Canadian
frame builder by the name of Maurice LaVoie. The Xizang
was a Titanium main frame with a cro mo steel rear triangle
bolted on. It is the only frame every designed this way. The LE
was full Titanium for the race team only.


In 1990 a titanium frame/model was introduced. This titanium frame got the - vacant - name "Xizang". 1991, two years after the first Xizang - GT introduced a fillet brazed steel frame again; initially without name in the 91 catalogue ("True Temper Chromoloy Frame"), later delivered unter the name "Cyclone". Due to copyright reasons the frame was renamed again: from 1992 - 1999 the "Psycone" was GTs premier steel frame, fillet brazed.

The alleged non-delivery of the 89 Xizang and the fact, that 99% of all GT-enthusiasts thought of titanium when they heard Xizang, made the 89 Xizang so special.

B. Appearance of the actual 89 Xizang

A few years ago, a fillet brazed steel frame under the name of "Xizang" appeared in this forum. 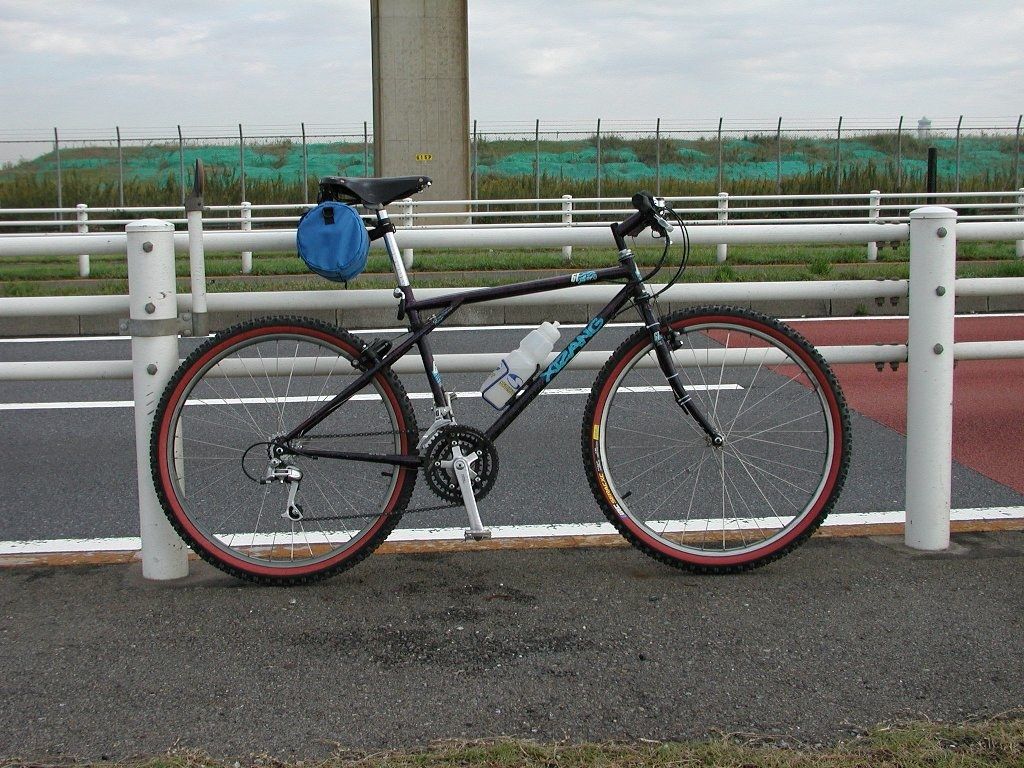 It had a slightly different paintjob (blue and pink webs insted of blue and yellow), featured a roller stem and did not have the BEAST. Size was 16". Components were Deore DX.

Worlds leading GT-collector, user GM1230126, reported from another example in Scandinavia but I have never seen any pics.

A short time later a second steel Xizang appeared and was also offered for sale. I did not buy it because it looked huge (and turned out as a 20"). It had the original fork but a plain black stem. Main decals looked like reproductions as they did not have a pattern in them. The group was mainly Suntour XC Pro. The seller, a semi-pro, said, that he got the frame from Team-GT during a world cup race in Italia in 1990 as a replacement for his broken Avalanche frame. 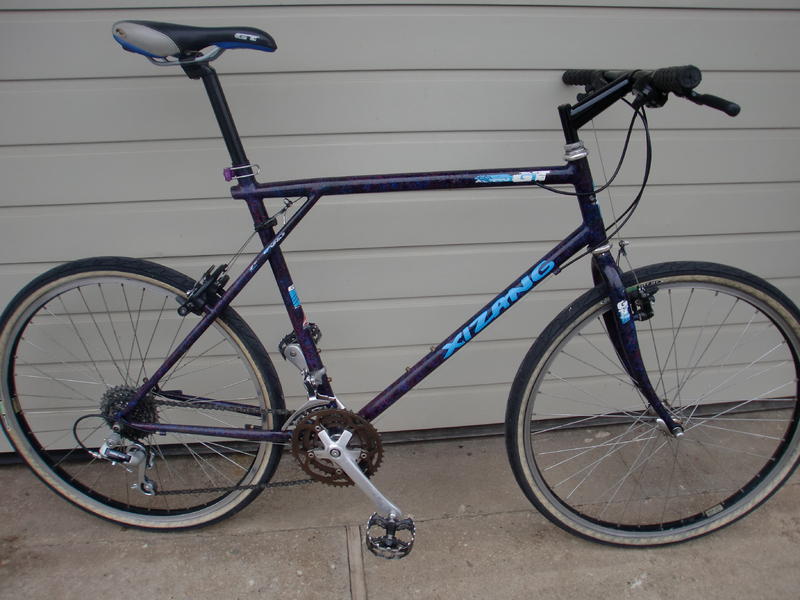 A few weeks ago, a third steel Xizang popped up in this forum and was offered on ebay.com. As I was on holiday/parental leave and do not search ebay.com I missed it. Two weeks ago I came across the thread here and PMed the owner. He is a very nice person and now the frame is mine. It should be with me shortly. 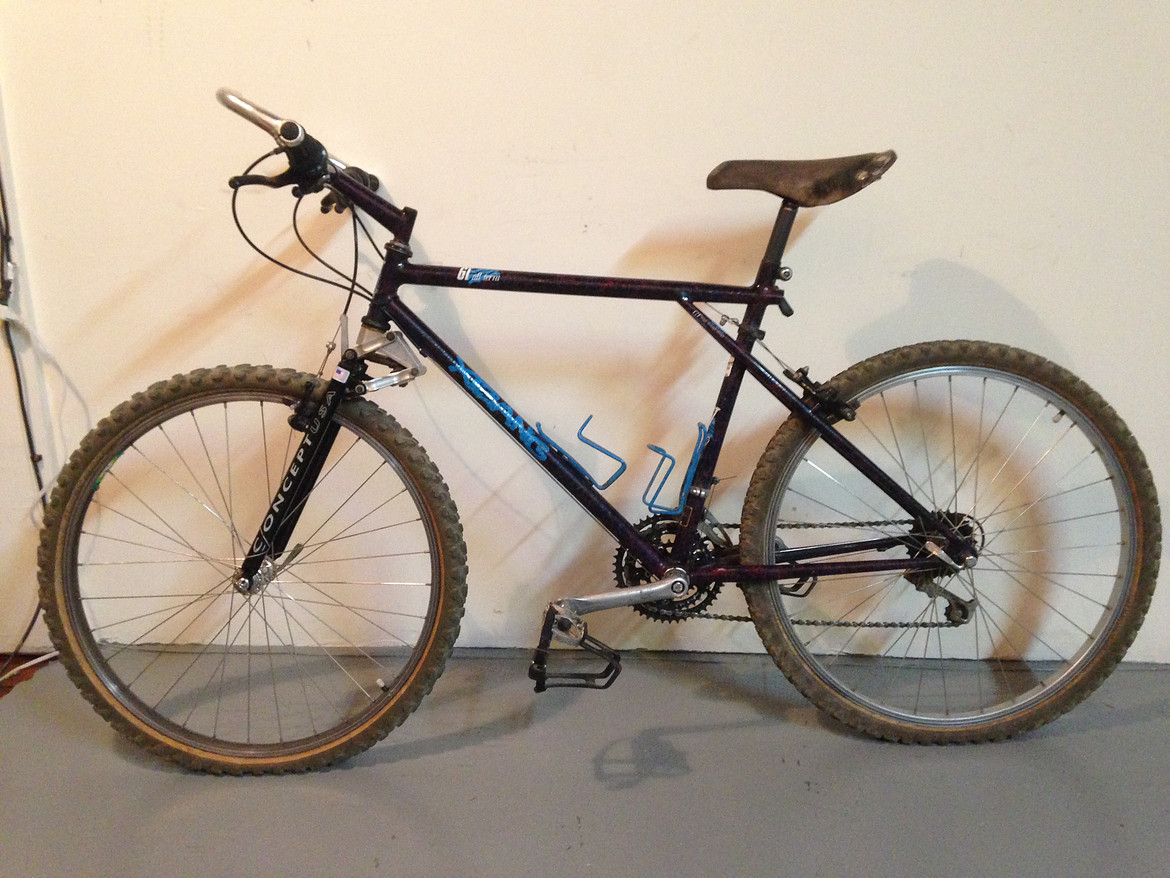 This is the first 18" model which has popped up so far - at least to my knowledge The most amazing fact was, that it featured many of the parts in the catalogue. However, the BEAST was missing.

C. The build of the catalogue

The 1989 Xizang featured some of the best parts available in 1989. A Tioga Carbon seatpost, the BEAST shifting system, Araya RM-20 rims and the XC 9000 Gruppo. The catalogue picture shows XC 6000 pedals and hubs, deviating from the table:

Key part is of course the Suntour BEAST. Apparently, some examples were delivered in 1990. One fine set is now with me thanks to mate, along with some other nice XC 9000 parts, some of which are NOS: 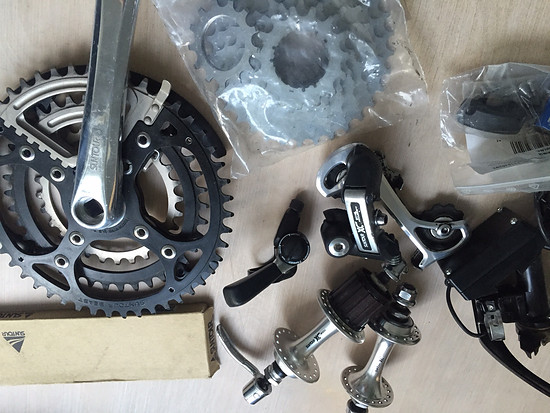 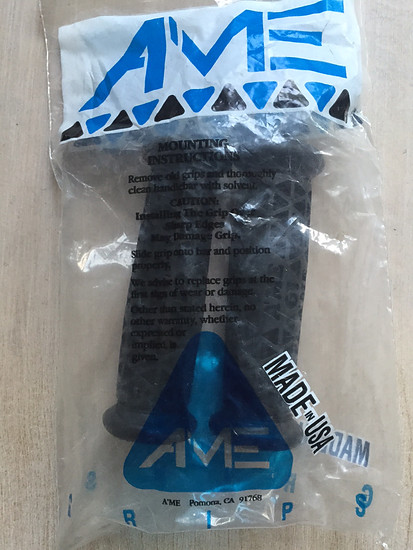 Another key part which is missing, is the fork. Thanks to user Coleman, I managed to acquire a fork from the 1989 GT Team Avalanche. It is the same fork (Tange Prestige, investment cast dropout, no braze-ons), only a different colour. I know two skilled artists who should be able to paint it according to the frame/stem: 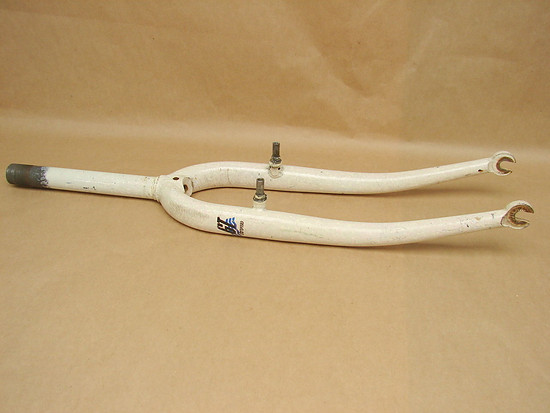 I am very happy and greatful! It doesn't get any better for GT-enthusiasts like me.

Thank you for your time!

I'm looking forward to seeing you rebuild this. It's great you've managed to get hold of the original fork, as that was the one thing that struck me when I first saw this in the valuations section.

BoTM Winner
Kona Fan
What an excellent story in two ways a) classic unicorn tale with a happy ending and b) great facts behind an ill-fated model (especially for those of us not hardcore fans of the brand).

How reliable and effective is the BEAST system today? Can you ride it in reasonable anger?

I've seen the BEAST in action on a Muddy Fox ridden in anger by Any123. He survived, it survived...

Thank you for the kind comments!


The frame arrived today and I am really happy. Condition is very nice for 26 years age:


Pics straight after un-packaging, no polishing yet: 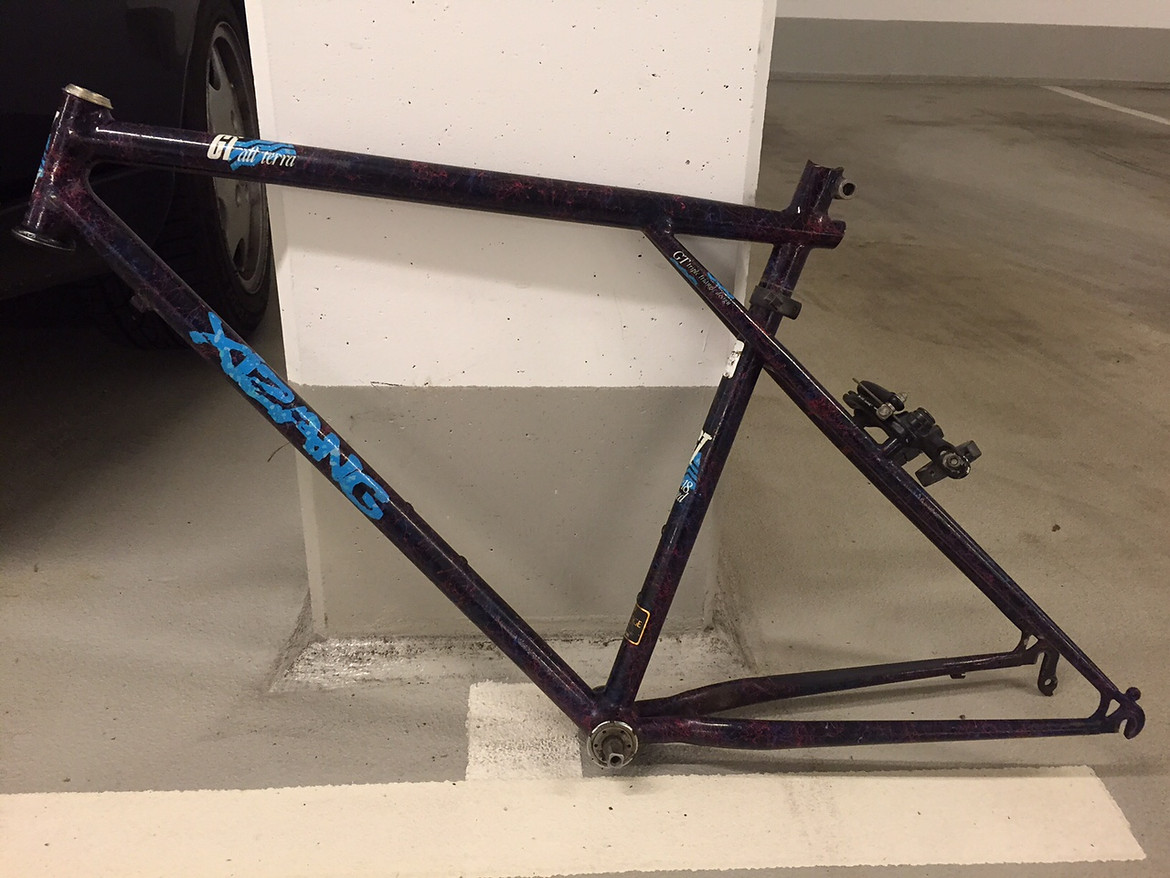 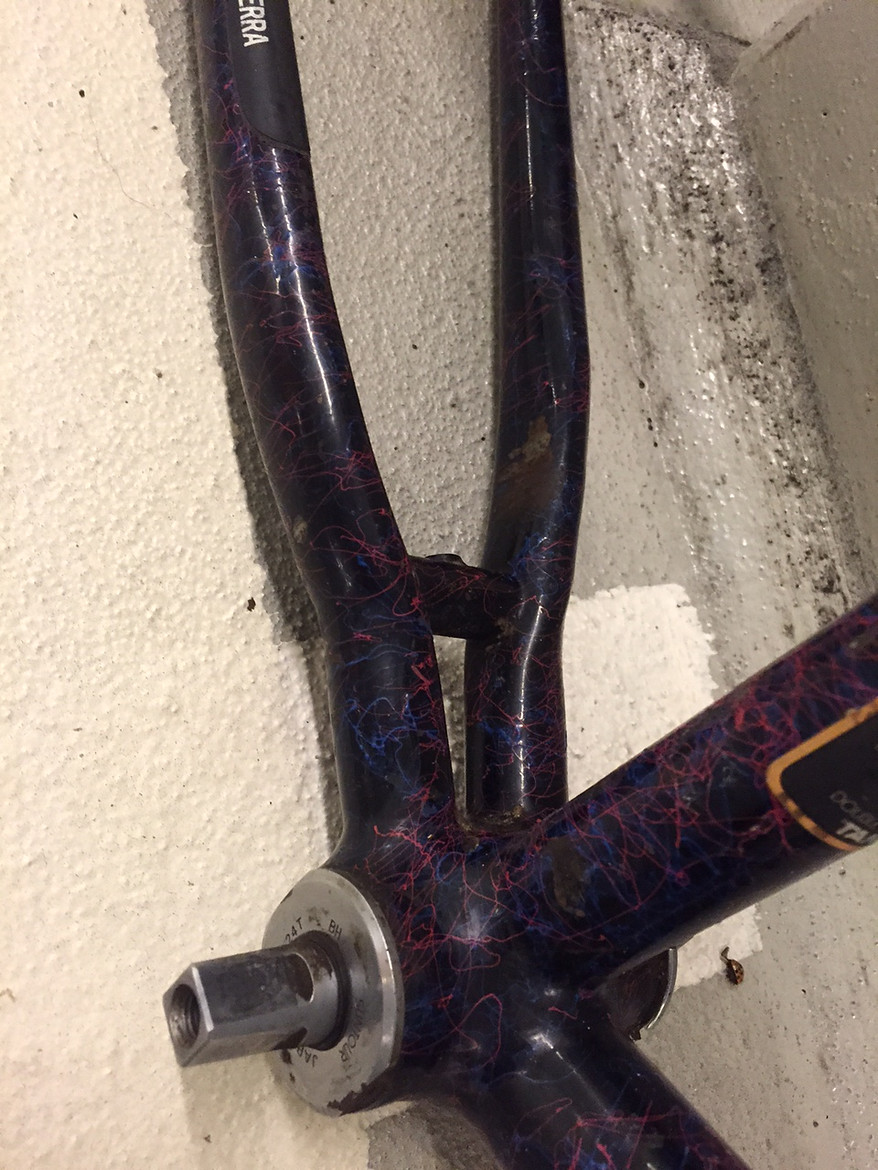 This pic answers the question if the rear hub had 6 or 7 cogs. 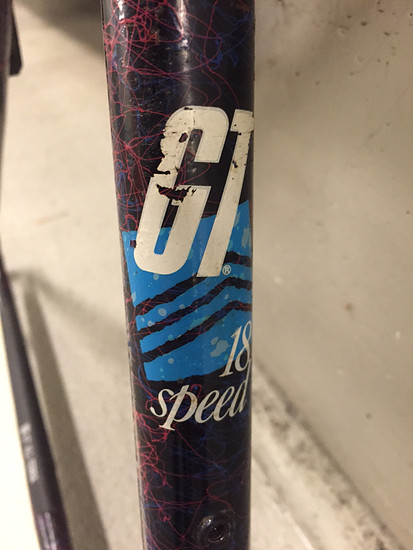 And this pic suggests that the frame was indeed produced and distributed (!) - however in very few numbers. I have contacted the retailer; they just had their 30th anniversary! 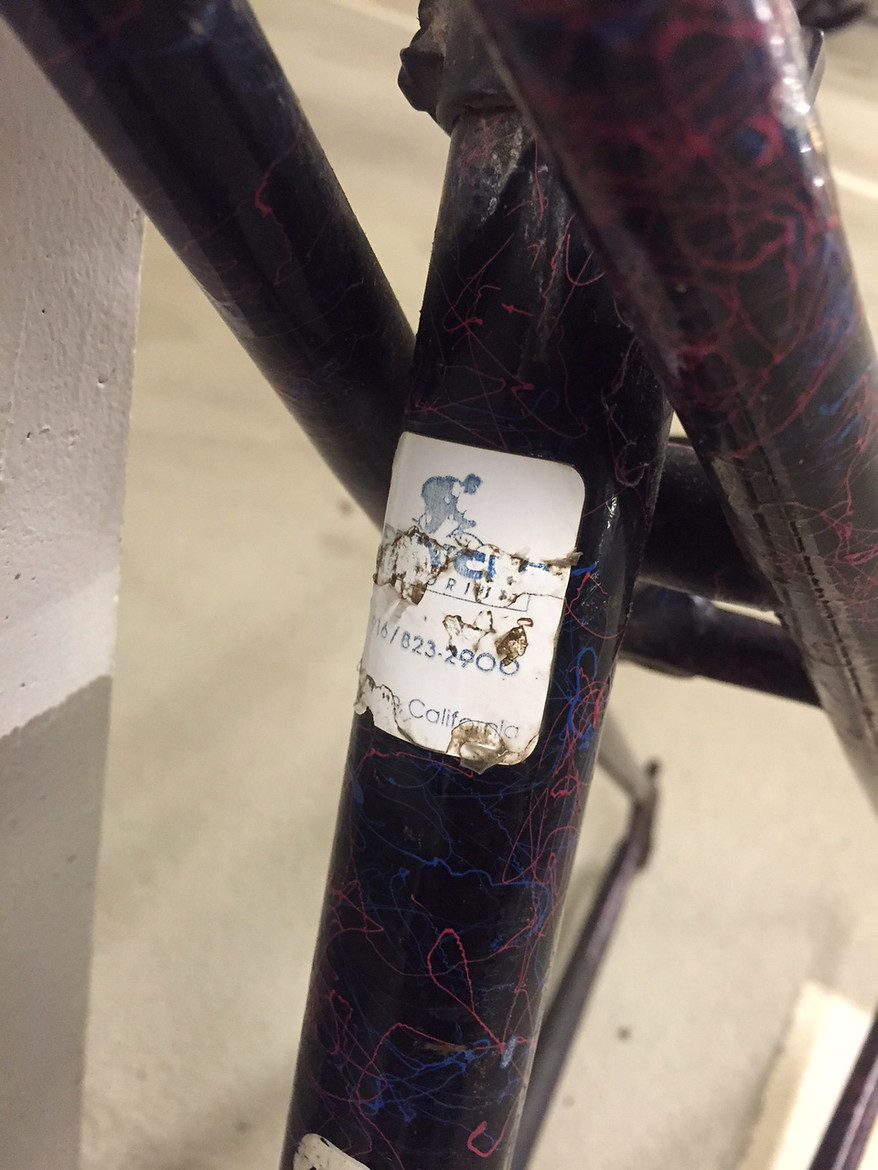 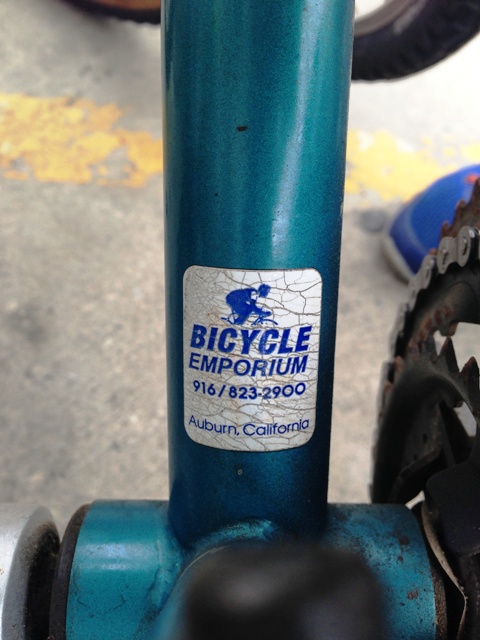 Good story, interesting frame and I really like it when an old dealer sticker reveals that bit more history.
K

Kool story, awesome bike; out of curiosity ... where in/near Berlin does one ride a mountainbike?
You must log in or register to reply here.