Living the dream ... or at least the late nineties dream I once had of owning one of those bikes ridden by Hawyes or Ashton during that golden period!

When this popped up on the For Sale thread I knew I needed to bag it quickly before it was descended upon by the masses. Luckily I got in early, got a head start and it happened to be just half an hour away. Massive thanks to @harper1068

Since picking up I’ve been manically sourcing what I can to try and rebuild it as close to the bike that featured in 'The Art of Bi-King' as I can, with some tasteful (??) diversions here and there to give it some individuality and make it mine.

With just a few bits left to find, I thought I’d share some of it on here over the coming weeks in case of interest to anyone, but also to thank those who have contributed parts to it and show them they’ve gone to a good home!

So let me start by introducing you to no.456 of 500, my 2002 Giant Team Trials, Martin Hawyes Limited Edition. 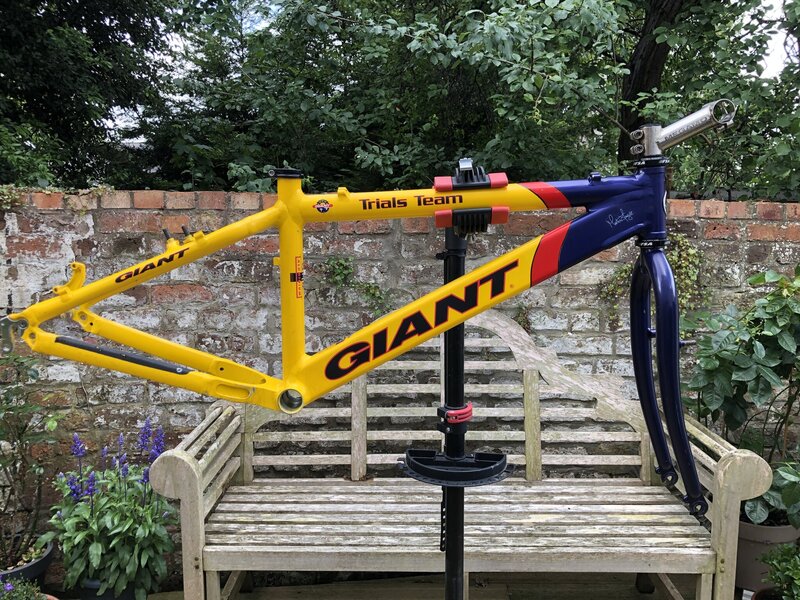 Awesome! This is going to be great.
D

Should be good. Did Martin Hawyes retire?

Duggee said:
Should be good. Did Martin Hawyes retire?
Click to expand...

Hoping so! Not sure about Mr. Hawyes. Looks like he is still riding motorcycle trials a fair bit from his Insta.

Quick update. If my forks come back from the paint shop on Tuesday I'm hoping to get the build mostly done next Thursday! Very excited!

Frame came with the original forks, as per post pics above, which were nice to have, although was keen to get hold of a Fatty R fork which I believe Martin used quite regularly on this frame. Was very fortunate to pick one up a few weeks back (thanks again @Luke26mhz). Pic below of the fork as I picked it up in it's lovely Volvo Cannondale Blue (steerer was sadly too short for the intended Ashton Signature frame). The fork is now with Joshua at Bristol Bicycle Restorations to match it a little better to it's new frame. Result to be posted early next week hopefully!

Have been going through some of the bits I've picked up for the build so thought I'd share a few bits over next few days.

The BigUn weighs an absolute ton! Looking to sub this out and get myself a matching rear red ti-glide. If anyone has one they'd be willing to let go I'm all ears ...

Oh, and tyres, I went for Holy Rollers. Not period specific, I apologise, but a big part of this build is to have a fun ride for getting out with my little boy on pump tracks, hard pack and the street so these seemed to suit. 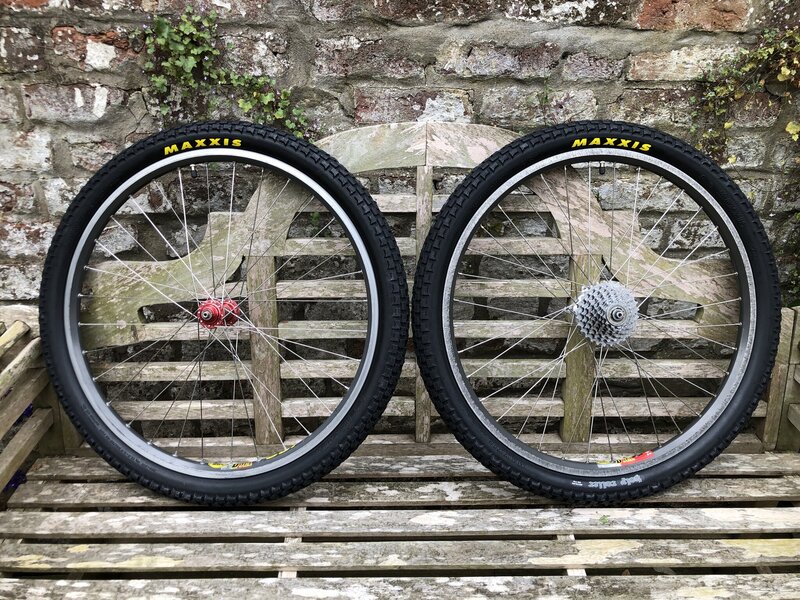 Forks not ready yet

, but gives me the opportunity to share a few more of the components I've managed to pick up for the build !

Particularly happy with the Filthy Ard! Although had to pay over the odds for it! I'm not even going to share the price!

Less happy with the Turbines which when bought had been 'touched up', turning out to have been coloured in with a not very permanent black marker! May look at having these legitimately 'touched up'! Anyone had anything re-anodised before? Is it possible to have a one off component anodised at a reasonable cost in the UK. Any recommendations, I'm all

In two-minds about running a cassette or single speed. I'm going to set it up with the cassette because I want the option of having a small range of gears, but may well simplify and go single speed if I find myself not using them. Would save me a bit of weight too, although that's not the highest priority!

You’d be better with these

d8mok said:
You’d be better with these
Click to expand...

Very pleased with what I've been able to pick up, but would still like the red version of the stem which would be the exact match to the Giant Team Trial I'm trying to replicate. I'll live with it for the meantime ...