Ah maybe it was the same thief who stole my friends Yamaha RD350 the same year in Amsterdam!
This early Ridgeback has gone home, bought off me by Maddison U.K. the Ridgeback importers where I’m told it is proudly on display in their reception area.
Which is nice....

98+ BoTM Winner
Yeti Fan
Funny, but in Spain the same year was launched the first MTB, the BH Running bull. I think in 1983 many european countries launched their fist MTB.

Before that, we use in the countriside the BH California, Orbea Motoreta and Furia, GAC AKM4 with rear suspension, the Torrot Cross MX and so on. Some with suspension, some with a gear lever like a car etc weird and fun years to be a kid

Ah maybe it was the same thief who stole my friends Yamaha RD350 the same year in Amsterdam!
This early Ridgeback has gone home, bought off me by Maddison U.K. the Ridgeback importers where I’m told it is proudly on display in their reception area.
Which is nice....
Click to expand...

It certainly is nice! A fitting 'end'
E

Saracen Fan
I just added a Saracen timeline to an attempt to document all mountain bikes built in the first ten years of their existence: https://mtbtimeline.com/wiki/saracen/start.

It's been slow going - as I'm only adding a brand a week. This couldn't have been done without the RetroBike resources, which are far more thorough than other forums.

enkidu said:
I just added a Saracen timeline to an attempt to document all mountain bikes built in the first ten years of their existence: https://mtbtimeline.com/wiki/saracen/start.

It's been slow going - as I'm only adding a brand a week. This couldn't have been done without the RetroBike resources, which are far more thorough than other forums.
Click to expand...

Hi enkidu, Well done and good luck in in your quest to create other timelines.

I can add a little information about what inspired the creation of the Saracen ATB. It goes right back to two journalists, Richard Grant and Richard Ballantine who were keen to introduce and promote US style mountain-bikes in Britain. Richard Ballantine was approached by two Australian Law students, Tim Gartside and Pete Murphy, who were studying in London.

The quote below is taken from Richard Ballantine's obituary, and was written by Richard Grant:
"After testing an imported US prototype mountain bike in 1982, Richard realised that they could transform cycling, but needed to be promoted. When two young Australian law students, Tim Gartside and Peter Murphy, approached Bicycle with a plan to ride across the Sahara on roadsters, Richard decided they should ride mountain bikes and that he and I should import them together. The success of the landmark, 3,410-mile, north-south crossing of the Sahara inspired us to import a further 20 mountain bikes to kickstart interest in them. Subsequently Richard co-launched the Fat Tyre Five series of mountain bike races, staged over five weekends in 1984."

For the February 1983 expedition, Charlie Kelly in the US sent two Ritchey Montare mountain-bikes to Richard Ballantine in London. Ballantine took the bikes to F.W. Evans shop at the Cut, near Waterloo station to be prepared for the ride, racks fitted etc. F.W Evans manager Garry Smith was so impressed by the bikes that he decided to have copies made to sell in his shops. I can only assume that he approached Brian Staples in Warwickshire. In October 2010 Elaine Dunn (Brian Staples daughter) said: "He did use the name of the Knight Saracen frame to brand his own products which became Saracen Cycles. The first UK ATB was sold from these premises and subsequently Saracen led the way in the production of this new trend."

The above story has been published somewhere. Probably in one of Richard Ballantine's or Richard Grant's publications.

Ideally, to complete the timetable we need the date that the Reynolds 501 ATB tube-sets, lugs, fork-crown etc. became available, as no 501 ATBs could be produced before this date. The earlier 1982 Cleland Aventura, a non US derived mountain-bike, was produced using smaller diameter Reynolds 531st tubing and cross-braced frames.

It may be that Brian Staples sold bikes sold Saracen ATB's from his premises before he supplied them to F.W. Evans. What I can confirm is the date that Evans received there first delivery of F.W. Evans ATBs. I first heard about these bikes in the Waterloo shop and was told by the staff F.W. Evans branded mountain bikes would be arriving at their Kingston Cycles shop. I took the day off and went over on the allotted day to have a look at these newly arrived bikes. There I made arrangements to come back the on a Saturday and hire a bike for test riding over a weekend. The date on the deposit receipt was 12/5/1984. The frame number recorded on the chit was 001. This bike had a black frame, Reynolds 501 tubing, a SunTour group-set and the characteristic over built brake bridge, as did all the other F.W. Evans ATBs in the shop and the silver one I bought a week or so later.

The first Saracen branded versions I saw was some weeks later at Bell St Bikes in London. Apart from the logos, they were identical to the Evans ATBs but only black ones were stocked. I recall that the Saracen Touring bikes also stocked in that shop were also in black.

If you do have evidence that Saracen were producing or selling mountain bikes before May 1984, I would love to see it so that I can update my own records accordingly.

According to this PDF file from Reynolds, 501-ATB tubing was available between 1984 and 1989.
http://www.reynoldstechnology.biz/wp-content/uploads/2015/10/decal_history.pdf

So no mountain-bikes could have been made using Reynolds 501-ATB prior to 1984.

Saracen Fan
Thank you for your research and insight. My dates were unreliably based upon my wish to have an easily documented timeline and others' wishes to prove that their Saracens were the first locally made mountain bikes to be sold in any quantity. I have updated my dates and guesses accordingly.

I wonder if Staples had received some Ritchey Montares as well? After all, Montares were made by Toyo Japan...

"The first mountain bike with a Saracen name on it was actually a stripped down and repainted bike from Japan." --Elaine Staples Dunn, [https://www.classiclightweights.co.uk/classic_builders/wolverhamptonknight-cycles/]

I like to think that Staples/Knight introduced the Saracen in 1983, but the evidence is slight:

It's likely that the Staples Saracen bicycle was born in 1983. Hopefully some examples emerge. Pictures are needed!

One thing that the timeline project shows is that, by 1983, there were over 50 mountain bike brands, making hundreds of thousands of bikes, including quite a few on the right side of the Atlantic. 1983 is just the right time for the movement to start flourishing in the UK.

Did a trip to Surrey and back to collect, literally dumped the bike in the garage and snapped some quick phone pics, then jumped back in the car to get to a meeting. The photos are point and click just to get a record for myself really - but thought I'd share. :) Obviously I haven't touched...

Some info here that I pulled together.

I bought a 501 tubed Kili Flyer from a chap who swore blind he bought it in 1981, just before the birth of his son.......clearly memory is not an accurate thing! i did try and point this out, but couldn't shake his belief so gave up and left him to his fantasy.

Synthiaks said:
I bought a 501 tubed Kili Flyer from a chap who swore blind he bought it in 1981, just before the birth of his son.......clearly memory is not an accurate thing! i did try and point this out, but couldn't shake his belief so gave up and left him to his fantasy.
Click to expand...

Yes, memories can play tricks and a bike that was named after an MTB expedition up mount Kilimangaro in 1985 is highly unlikely to predate that event. The imbedding of incorrect facts, or incorrectly conflated facts as above, into long-term memory can turn the most honest of people into abject liars. "Repetition makes truth." so the more the lie is repeated, the more convinced the person becomes that it is an unchallengeable fact. These misrememberings can spread like wildfire and end up being written down as history and fact.

And then there is conformation-bias, where people want so much for something to be true that they search out unconnected information to confirm it.

In the case of the date of the first Saracen / F.W. Evans ATB to be produced, I have no problem with being 1983 but I have to-date, seen no definitive evidence.

We do no that the bike was being advertised in 1984 as the first MTB to be produced in Britain. Such advertising would have come under the scrutiny of the Advertising Standards Authority and so open to challenge by other bicycle manufacturer's or members of the public. So its place as the first US style mountain-bike to be produced in Britain is secured. Though evidence from Cleland's promotional material means that Cleland Aventura holds the position of the first non-US originating mountain-bike to be produced in the UK/ Europe. Cleland only produced mountain-bikes so there is no confusion about what they were producing whilst Saracen produced road bikes before they moved onto making their ATB models.

I am currently gathering contemporary, primary source information about the origins of the Saracen/F.W.Evans ATB. I already have this advert from 1985 that names Gary Smith at F.W. Evans as its designer. I know that I have further contemporary information about Gary Smith's central role in how the bike came into being. However, finding it in my archives is taking time.

Bellow: Advert published in Bicycle Action Magazine in 1985 which states the the bike was: "Designed by Gary Smith of F.W. Evans..." and also that: "...Nick and Dick Crane rode Evans designed Saracen bikes to the top of fabled Kilimanjaro,..." 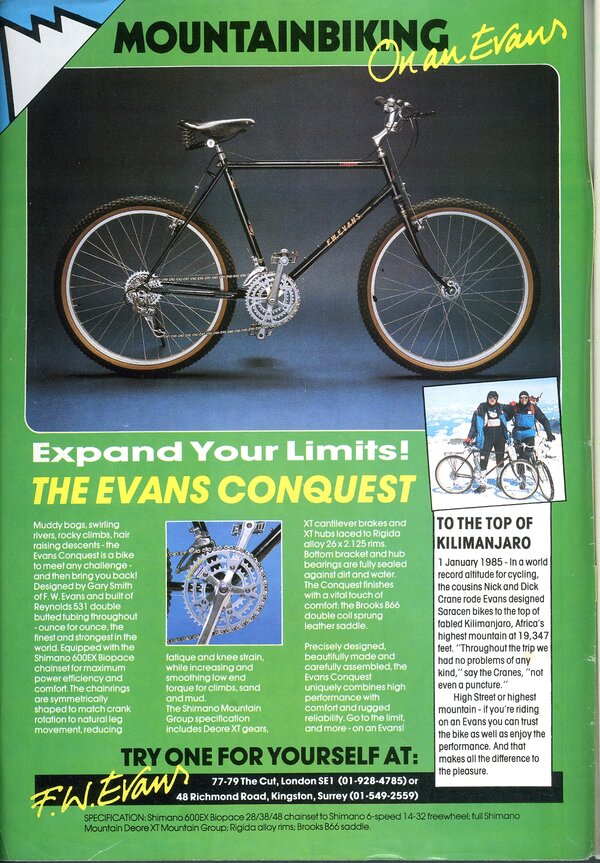